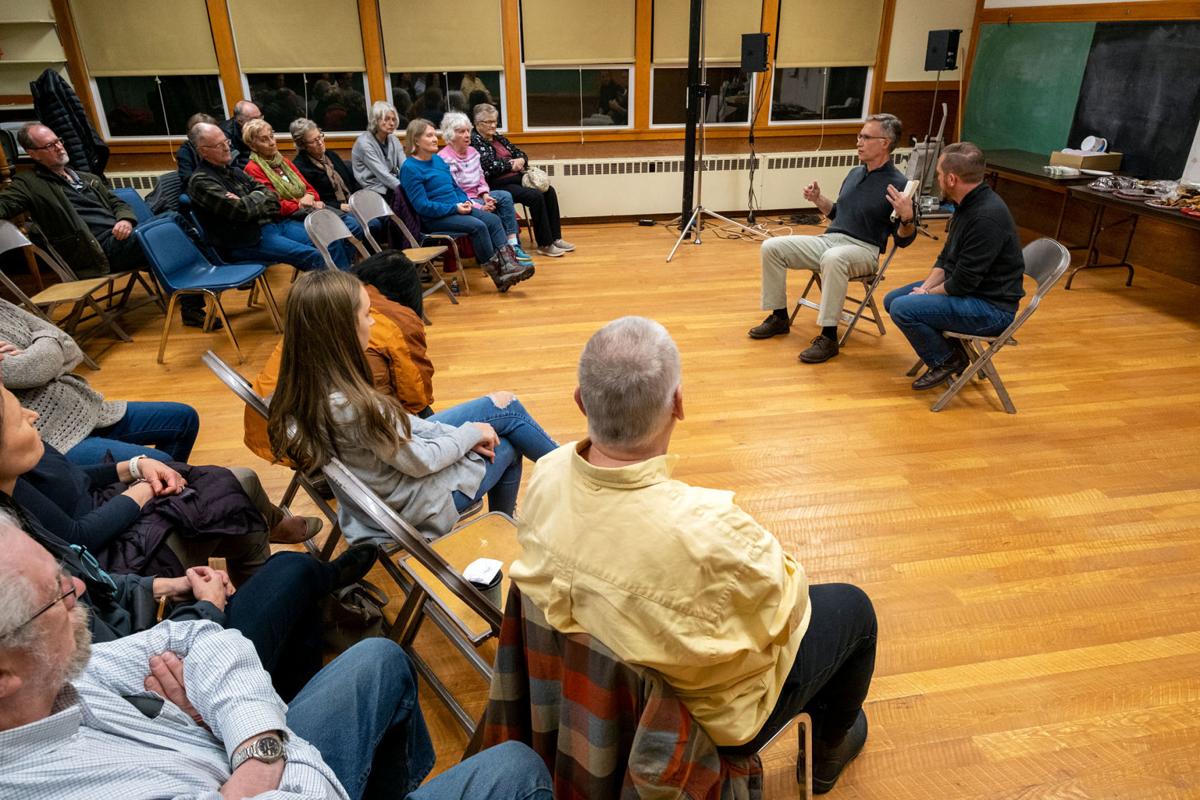 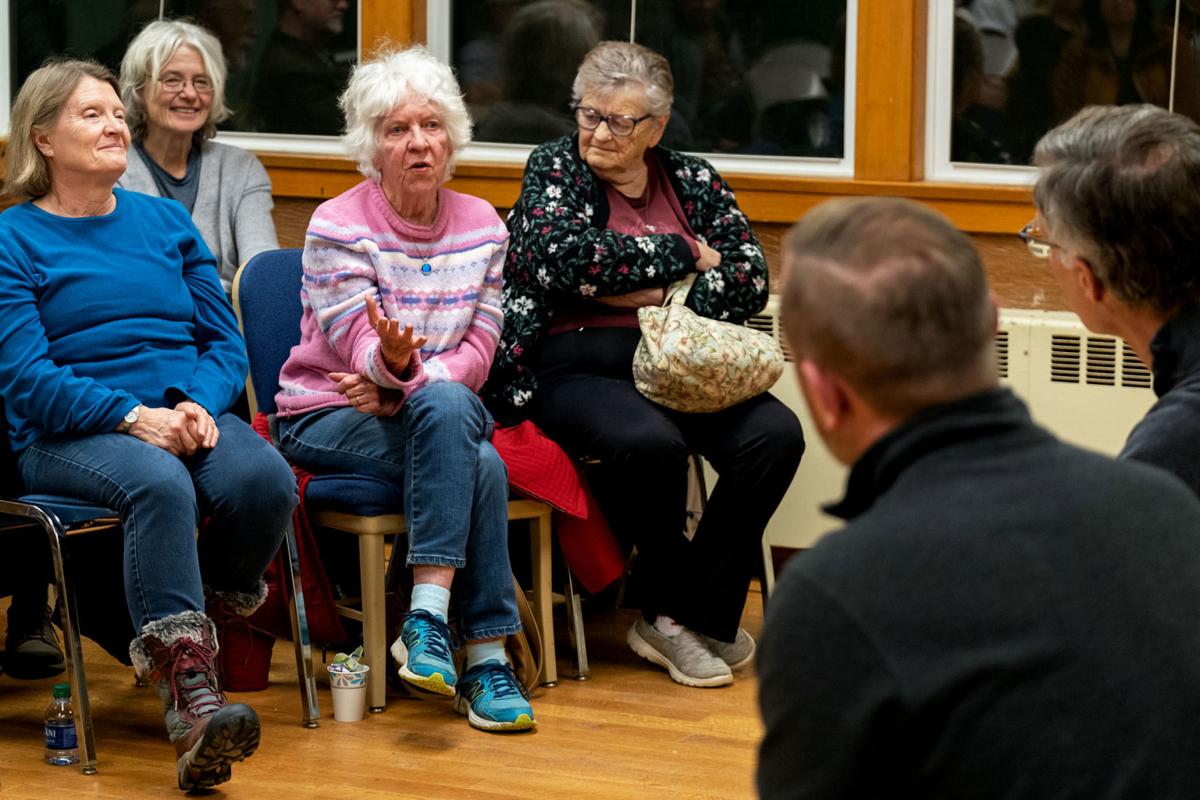 Kathy Dyer of Boulder participates in a discussion following a screening of “Dark Money” at the Old Red Schoolhouse in Clancy Dec. 5.

Kathy Dyer of Boulder participates in a discussion following a screening of “Dark Money” at the Old Red Schoolhouse in Clancy Dec. 5.

“How can we stand by and let this happen?” - Jim Peterson (R-Buffalo), former Montana Senate president, in “Dark Money”

The Monitor produced an absorbing event last Thursday at the Clancy Library. Before a packed house, we screened “Dark Money,” a recent documentary by Helena native Kimberly Reed that exposes the impact of covert corporate influence in Montana politics – and tells the story of those trying to keep elections fair.

John Adams, the journalist whose efforts to uncover the campaign finance scheme are at the center of the film, joined us to provide his expert view on the state of Montana politics – which jump-started an energetic discussion on the health of citizenship and democratic function.

If you haven’t seen “Dark Money” yet, you should. (It’s available via Amazon and YouTube, among other sites.) I’ve watched it three times, and it doesn’t get any less scary to see how easily politics can be manipulated by outside actors whose identities may not ever be known. And the ending is not exactly happy: It’s clear that, if anything, the threat will only heighten.

But “Dark Money” also is an optimistic story – a tale of our resilient democracy and of determined citizens undaunted by a massive, well-financed, and unseen enemy. And at the heart, it’s a story about Montana, anchored in the values that make this place what it is.

Here’s what I took away from the evening:

Good journalism matters. Call this self-serving, but it’s hard not to watch “Dark Money” without appreciating the value to society of strong and independent watch-dog reporting. Adams, a former Great Falls Tribune political correspondent who founded the online news site Montana Free Press, spent months living out of his truck and on friends’ couches in order to document the opaque, tangled trail of contributions to Montana political campaigns from groups like the American Tradition Partnership. His work helped build public awareness and demand for reform, which crystallized in the 2015 Disclose Act, requiring political advertisers to reveal the sources of their funding.

The problem, of course, is that, as newsroom budgets have evaporated in the last two decades, this sort of high-quality investigative journalism has become scarce. The little that remains is harder to find amid the burgeoning mass of shadowy – ok, call it “fake” – reporting of uncertain provenance and selective attention to fact. Adams warns: “If you can’t call the people who are producing the news, you might as well ignore it.” (An aside: You can call The Monitor. And Montana Free Press.)

Bi-partisanship is possible. There are bad guys in “Dark Money.” Then Senate Majority Leader Art Wittich was found to have violated campaign finance laws, and state Republican leadership appeared to be leveraging dark money to intentionally to weed out legislators who didn’t toe the party line.

But as Adams pointed out, dark money cuts both ways: In other states, Democratic leaders have been proven just as culpable. And in 2012, when Montana became the only state in the nation to challenge the U.S. Supreme Court’s landmark Citizens United decision, politicians from both sides of the aisle – including Jim Peterson, a conservative Republican stalwart – took up the fight.

In other words, campaign finance reform isn’t really a matter of left vs. right or of party doctrine. It’s a matter of safeguarding the democratic institutions that are the foundation of this nation. Even in a moment of historic political polarization, it’s not hard to imagine that we might come together around other important issues.

“It’s easy to get into your ideological bubble,” Adams said. “But we’re not as far apart as we seem sometimes.”

Citizenship is not dead. Toward the end of the evening, Dave Cooper of Jefferson City asked how many attendees had ever testified before the state legislature. About half the room raised their hands. I (and others, I’ll wager) thought: Wow. Political agency is not dead in Montana. The corridors of power are not closed. We have voice.

Ultimately, “Dark Money” is the story of citizens who decided that, to borrow from Jim Peterson, they couldn’t stand by. The forces behind corporate campaign contributions were massive and difficult to fathom, but their victory wasn’t inevitable. Citizen-legislators, lawyers, journalists, and others decided they could take corruption on. Their belief in their own efficacy, and their skill and hard work, literally changed the course of history.

I asked whether people agreed, or not, that individuals actually did have a say in their democracy, and whether they could make their communities and society better. “If we pull together,” responded one. “If we speak out, and say it louder and louder, it makes a difference,” said another.

Shani Henry of Basin noted that she has become politically active only in the last three years. “I dove in headfirst,” she said. Already, she feels heard on issues that matter to her: “Montana is small enough that one person can make a difference.”

I want to thank the Clancy Library for hosting us last week; Dave Brown for providing speakers and helping us figure out the projector; the Basin folks for bringing very fine baked goods; and John Adams and his team at the Free Press for spending the evening with us.

Mostly, I’m grateful to our friends In Basin, Bernice, Boulder, Clancy, and Helena who made the trip and contributed to the thoughtful and energetic discussion. The Monitor will be producing more events like this over the coming year, part of our effort to catalyze constructive, solutions-focused discourse on issues that matter. We hope you’ll join in.