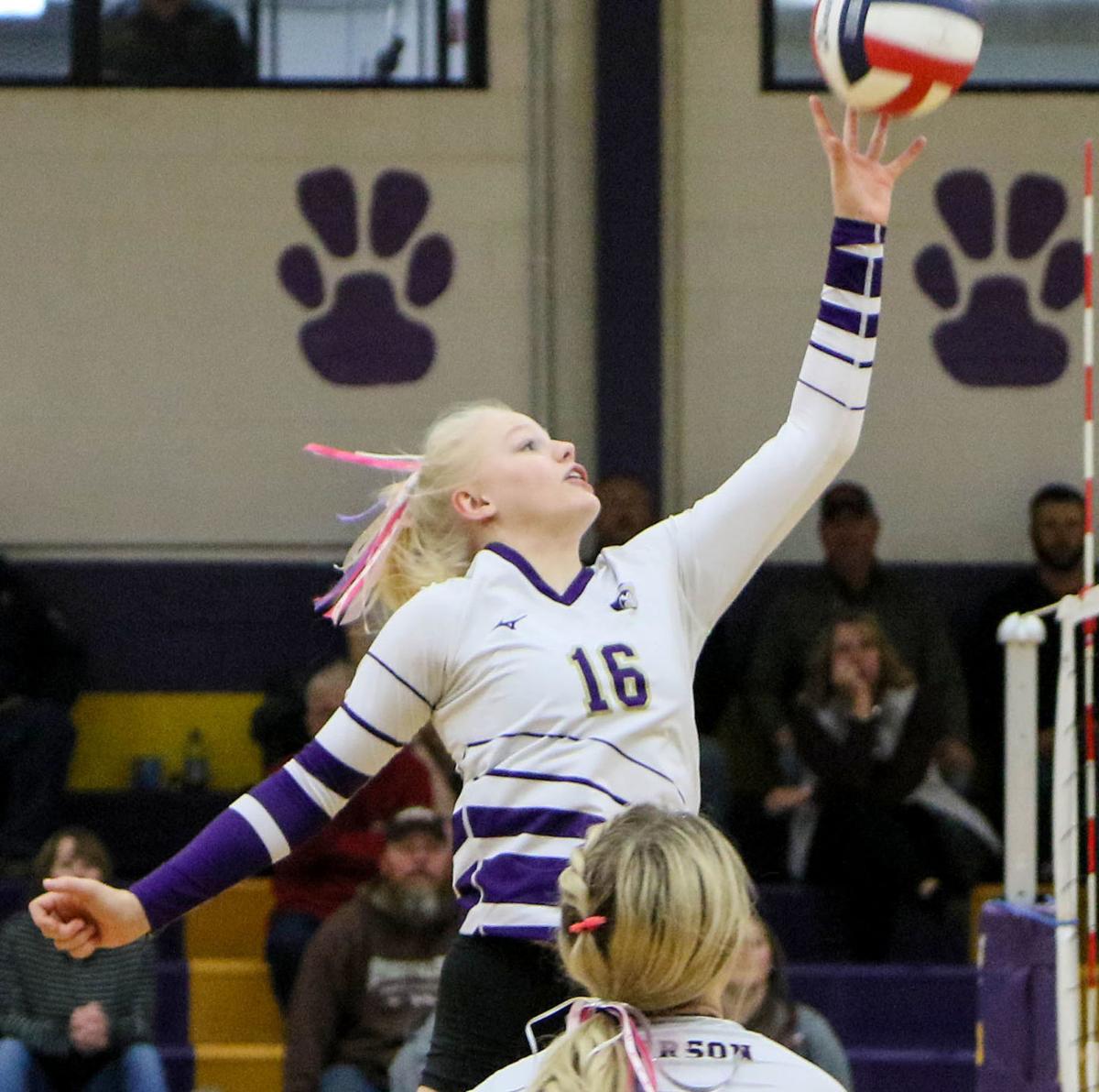 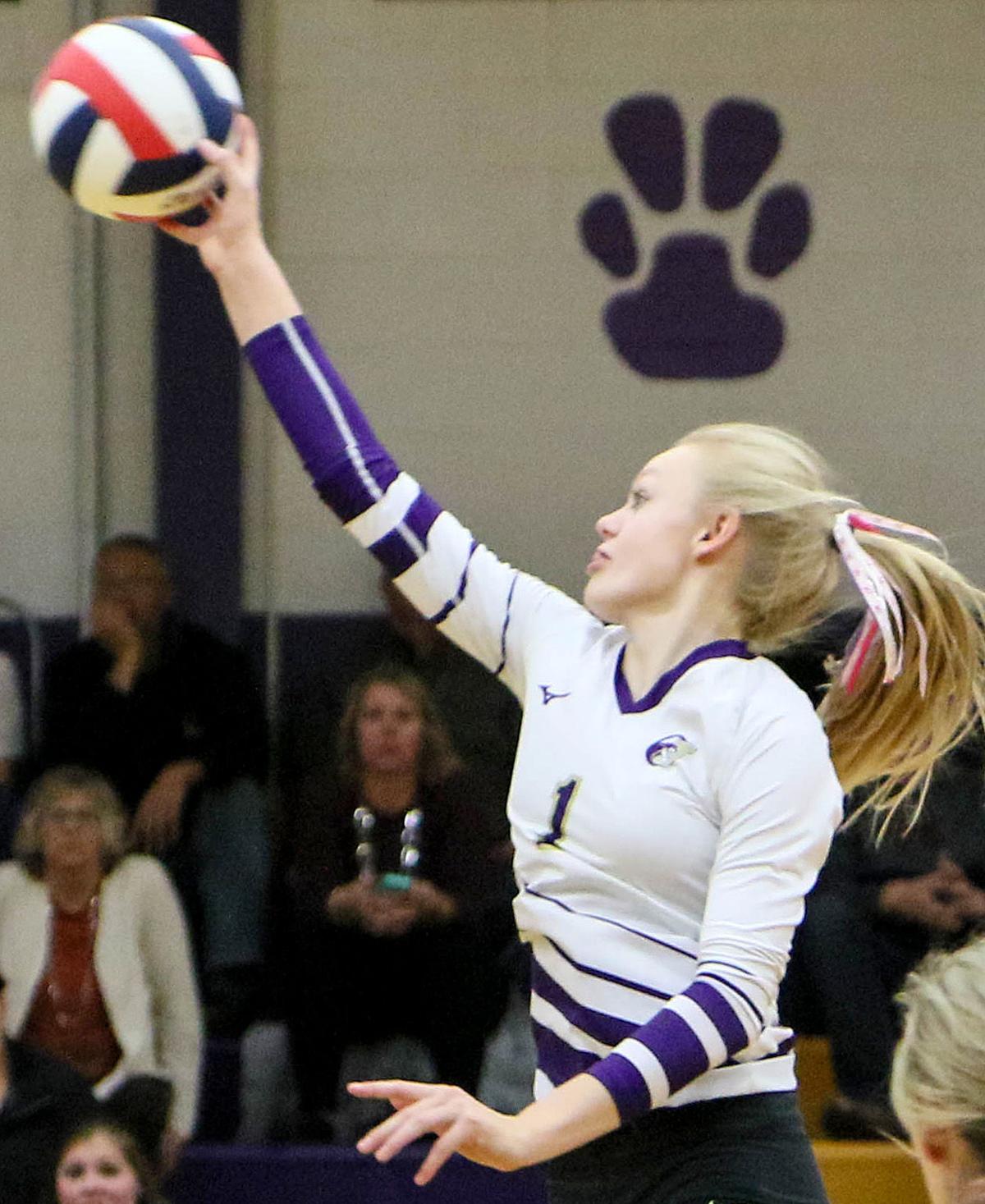 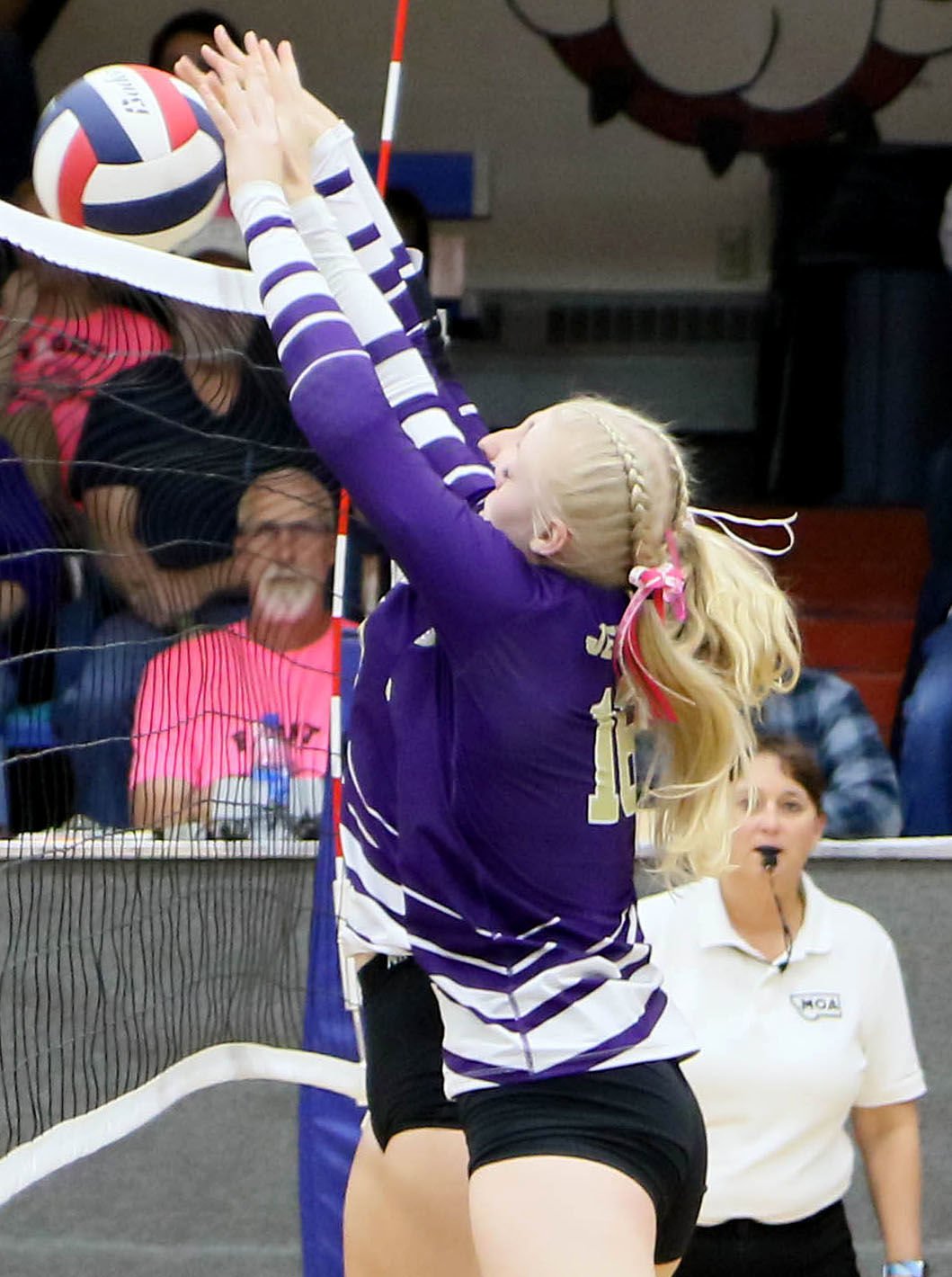 Mykala Edmisten and Jadyn Bellander block the ball against Townsend. 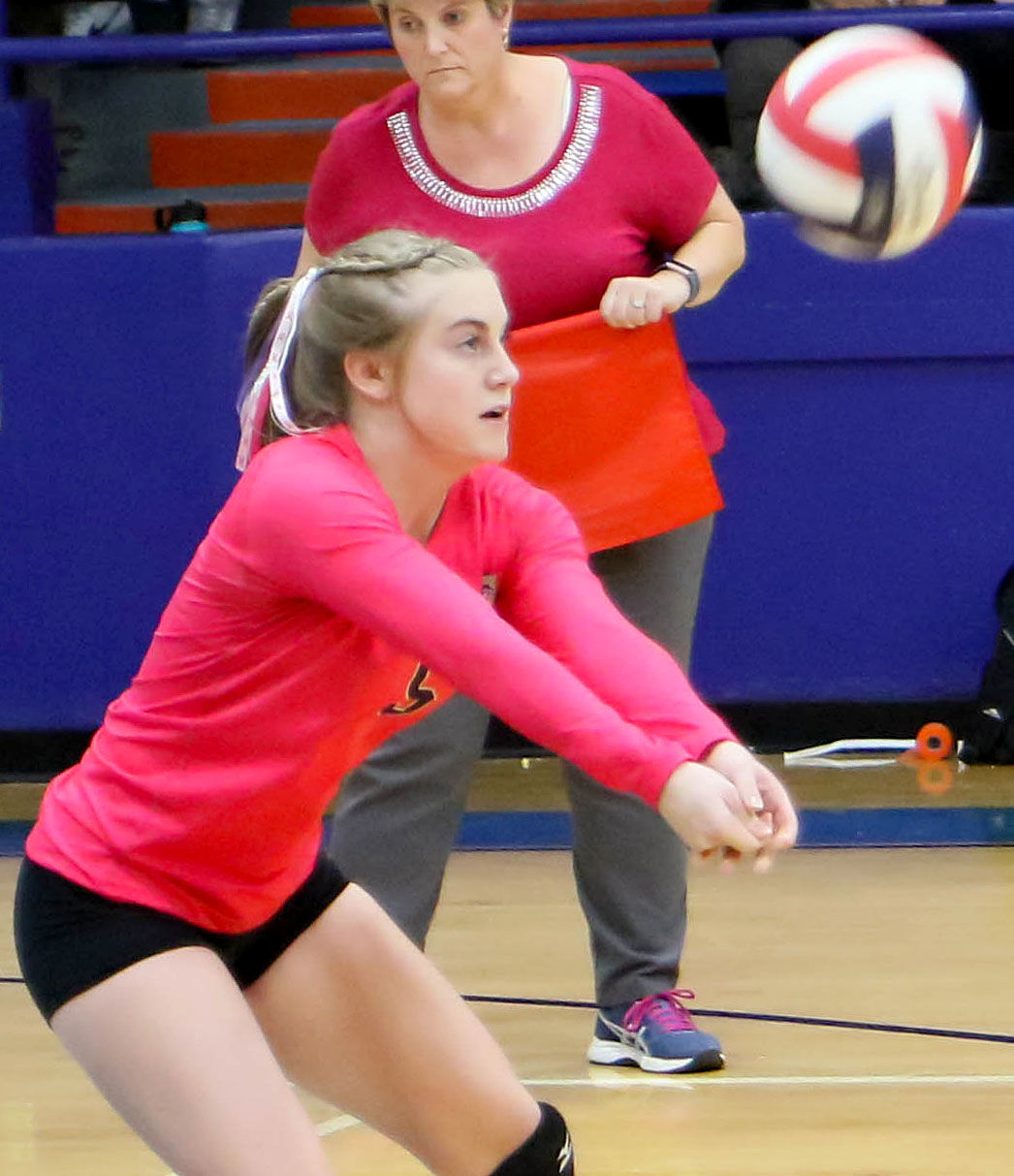 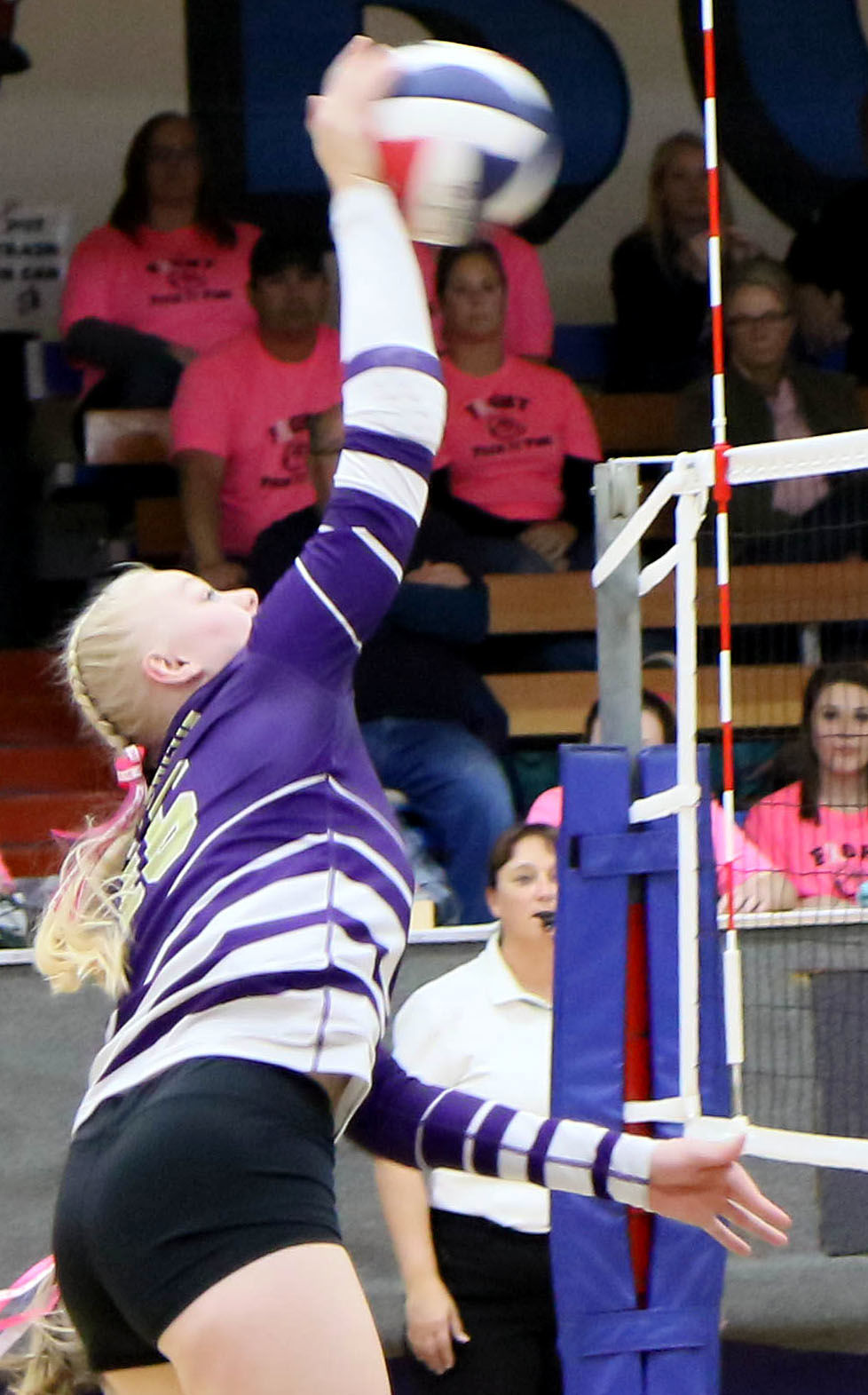 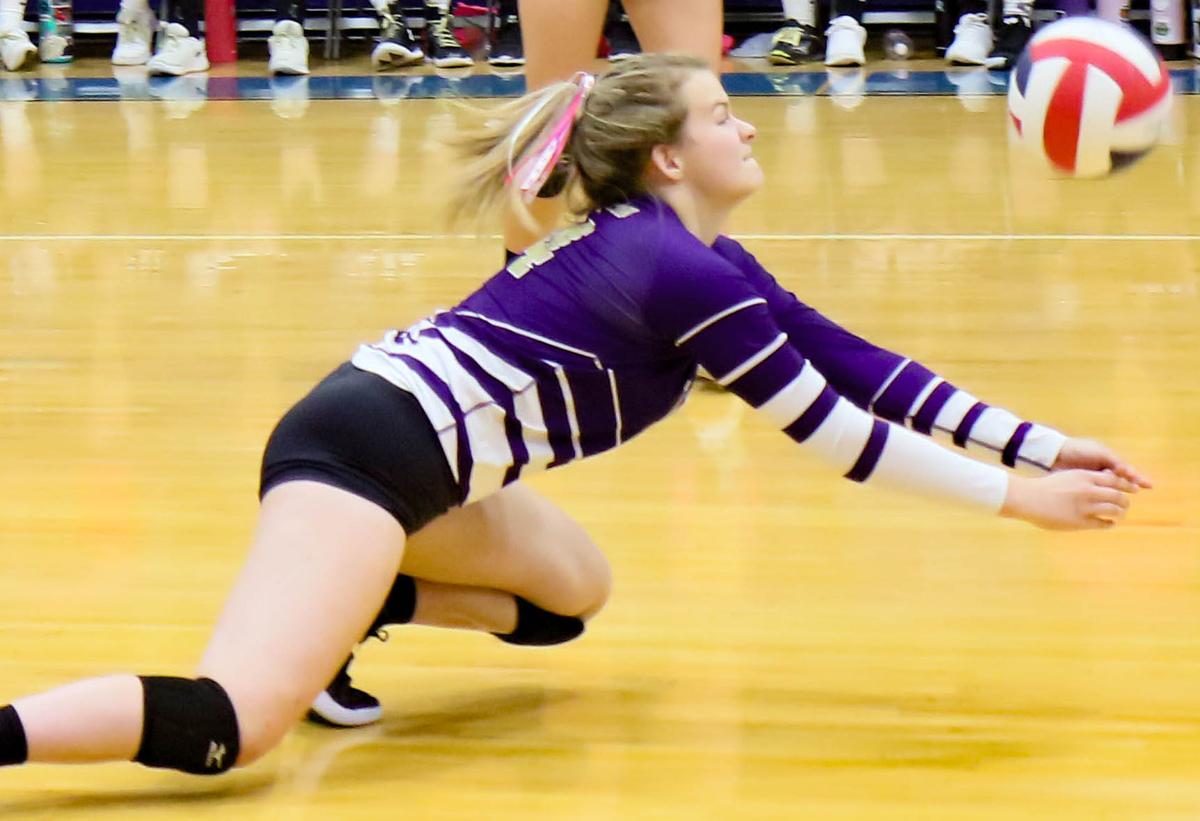 Hope Dobyns dives for an arm-bump against Townsend.

Mykala Edmisten and Jadyn Bellander block the ball against Townsend.

Hope Dobyns dives for an arm-bump against Townsend.

In Townsend on Thursday, the Panthers fell behind to Broadwater early. But a kill by Mykala Edmisten sparked a 6-0 run, and an ace by Emma Grange and kills by Dakota Edmisten and Grange gave the panthers a 9-7 lead. The teams stayed close after that: After an ace by Kylie Marks put the Panthers up 16-14, the set saw eight more ties, keeping fans on the edges of their seats. Finally, the Bulldogs scored the final two points for a 26-24 win.

The Panthers took a 3-0 lead to start the second set — but then the flow went the other way. Jefferson hit the ball hard, but many of their shots went past the end line, helping the Bulldogs to a 25-12 win. Set three saw the Panthers go up 4-3 on an ace by Marks and a kill by Dakota Edmisten. But from then on it was all Bulldogs, who went on a 20-10 tear. A kill by Olivia Lyon gave Panther fans some joy, but the Dogs prevailed, 25-15.

On Saturday, Jefferson came home to take on the Wardens of Powell County. The Panthers quickly went up 6-0 on a kill by Kykala Edmisten and an ace by Emma Grange. An ace by Dakota Edmisten and a sneak over the net by Marks have the Panthers a 13-5 lead, and they went on to take the first set, 25-19. In the second, Marks put on a serving clinic, smashing six aces to spark a 15-1 lead. A kill by Hope Dobyns, ace by Rachel Van Blaricom and a block point by Lyon stretched the margin to 24-9, leading to a 25-12.

Set three started a little closer, but a great dig by Grace Alexander put Jefferson up 10-5. It was 17-8 after an ace serve by Grange, and the Panthers went on to win 25-20. Kylie Marks had a great match with 6 aces, 6 kills and one block. Mykala Edministen notched 7 kills and 3 blocks; and Dakota Edmistensen had 9 digs and 6 kills. Grace Alexander added 8 digs, while Emma Grange and Ashton Oxarart provided 12 and 11 assists, respectively.

The loss to Townsend leaves Jefferson in third places in District 5B, behind Manhattan and Broadwater. The panthers were scheduled to host Manhattan Christian on Monday then travel to Whitehall on Tuesday. On Saturday, they visit Big Timber. They’ll finish out the regular season by hosting Manhattan on Friday, October 25, with a 2 pm start time for the C squads.