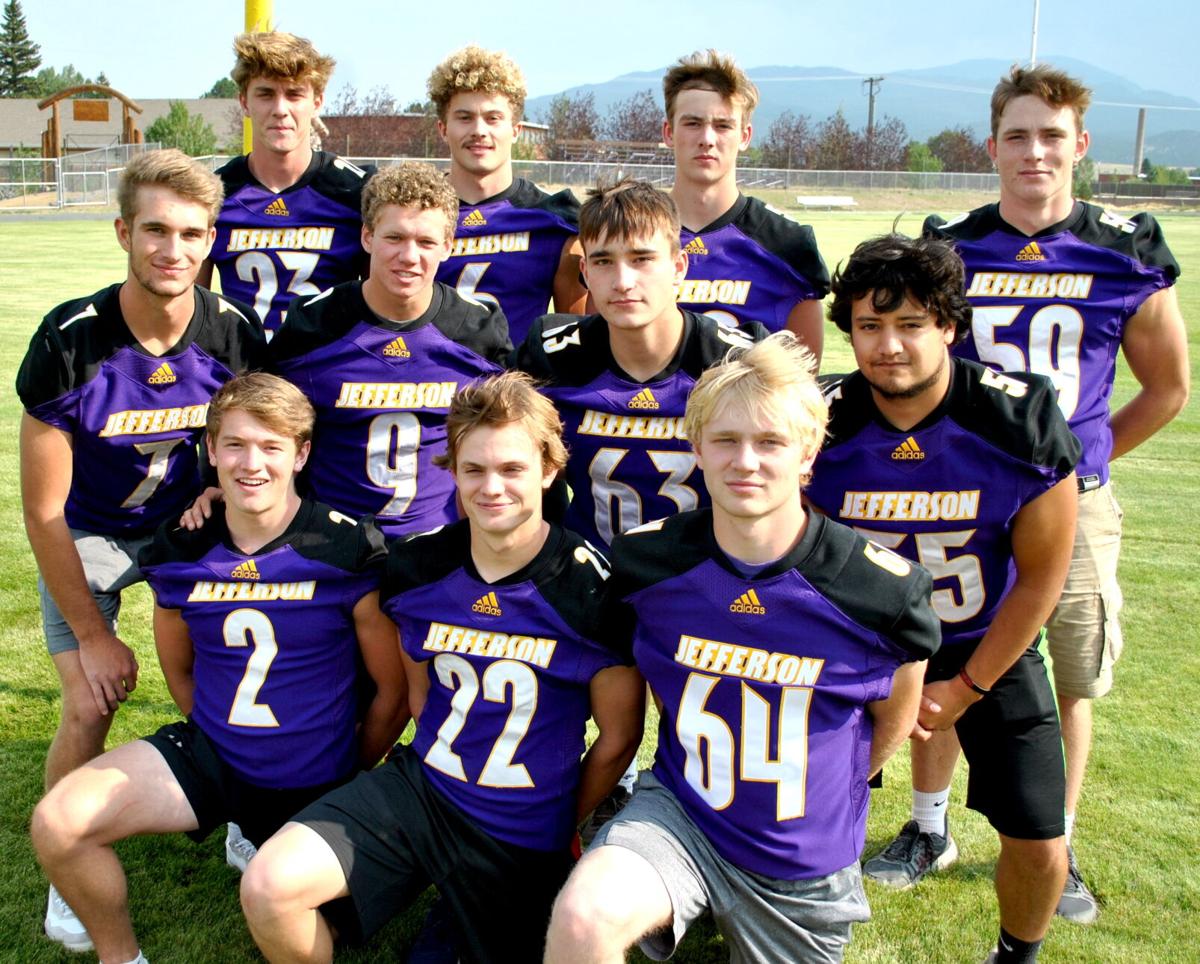 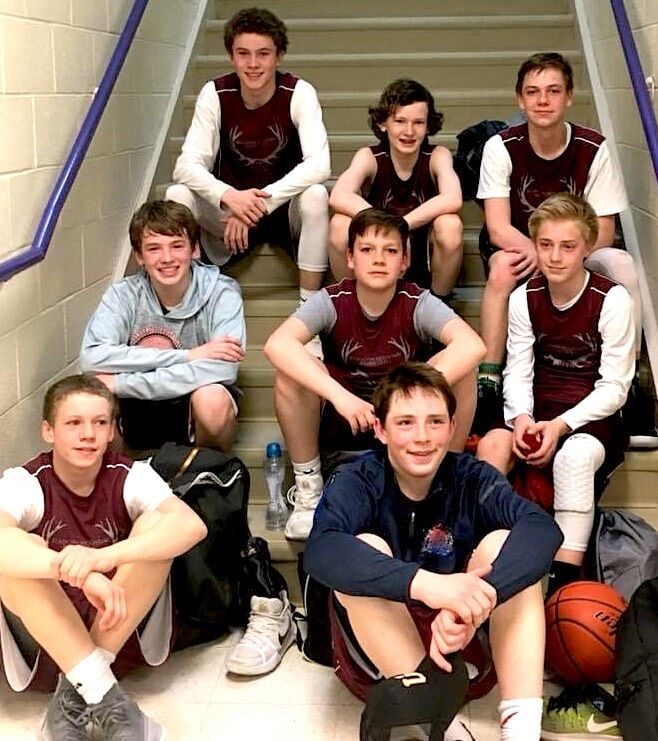 It all started in fifth grade. Or really, in first grade.

Well, no: Perhaps it started back in 1994, at Butte High School. That’s where Kevin Harrington and Josh Morris became friends. Josh and his then girlfriend, Erika, would eventually marry and settle in Boulder; Harrington and his wife Trish would move to Clancy.

And they would have boys. And their boys would play sports.

In first grade, there was flag football, and Elkhorn youth basketball. Harrington’s son, Tyler, and Morris’ son, Braden, were the same age. Tyler had been friends with Joe Visser, another Clancy kid, since kindergarten. Morris connected with Heather and Eric Rykal, whose son Wade was at Boulder Elementary. And Harrington knew Mary and Kyle Eckmann; their older sons had played sports together, and now Luke Eckmann was the right age.

And that was it: Tyler, Braden, Joey, Wade, Luke. The original Boys.

“You could see from an early age,” says Kevin Harrington. “They just wanted to be good. And they had great chemistry together.” They were just little kids, of course; they were playing for fun, and the competition was less intense.

But already, they were displaying a competitive streak. Rykal “liked to tackle, he liked to be physical,” his mother, Heather, says. “He would be excited about going to practice.” Tyler and Joey would try to outdo each other in practices, Tyler says. “We always tried to better the other.”

The parents started talking. “They get to chatting, and everybody’s interested in their kids having opportunity to play,” Harrington recalled. What if they could bring together their talented sons early on? What if the boys could start playing together in fifth or sixth grade, and keep playing together, and go to high school together?

What might happen if they all landed at Jefferson High?

In many small school districts, that sort of path is a given. In Manhattan or Whitehall or Three Forks, everybody goes to the same grade school and then moves up to the same high school. Kids play together from day one knowing they’ll likely graduate together. In Jefferson County, though, kids are split between elementary schools in Boulder, Clancy, and Montana City—and then some spin off to high school in Helena.

So, the parents came up with a plan. The Boys—that’s what the boys came to call themselves—began playing “Small Fry” tackle football together. And they formed a club basketball team, with Harrington as coach and Morris his assistant.

From October to March each year, they played 40 games, jammed into cars for long trips to tournaments, packed into hotel rooms together. “It was awesome, so much fun hanging out with those guys,” Visser says now. “It’s special that we got to grow up together.”

The Boys expanded. Luke Eckmann had known Jake Genger in Montana City since kindergarten. Jake’s mom and dad, Jenny and Noah, liked the other parents in the group—“solid people,” Jenny says—and the small-town feel of Jefferson High. Jake was in. Jayden Kemner and Trent McMaster, both Clancy kids, also joined up.

And the buzz started growing. This was a team with the talent, the drive and the chemistry to do really well. They took their divisions at tournaments in Helena and Great Falls—and in 2018, in their last club tournament together, they won the Bozeman Fall Ball Classic.

“Ever since eighth grade, we’ve been told, Jefferson High has never had a state championship in football, and we think this is the group of kids who can do it,” Tyler Harrington says. “There are high expectations,” added Visser. “And we don’t expect anything less than that ourselves.”

With few seniors on the 2020 Panther football team—only one, lineman Matt Riehl, played regularly—and none on the basketball squad, The Boys were effectively put in charge a year early. And they weren’t ready. They say their confidence was off. They made silly mistakes.

“I was disappointed,” says Braden Morris, the Panther quarterback. “We had a lot more potential than what last season showed.” They were upset by Sweet Grass County, 16-15, and dropped a close match-up to Whitehall, 13-7. They salvaged some pride with a tightly fought 24-13 loss to Manhattan, which ultimately cruised to the state title. But that still left Jefferson at a disappointing 2-5 for the season.

Basketball went only a bit better: The Panthers went 8-7 in the COVID-shorted season, but they crashed out of the District tournament in just two games, including a loss to a Whitehall squad that had been winless during the regular season.

And then: Track and field. “We were doubted,” says Visser. But the Panther boys track and field team grabbed second at the Divisional Meet on May 20. And the following weekend, they took the state crown. Visser won the 300-meter hurdles, with Morris a hundredth of a second behind. Morris took the title for 110-meter hurdles, and placed fourth in the javelin and second in the triple jump. Rykal narrowly lost the shot put.

“That was huge confidence booster,” says Tyler Harrington. “State championships are a big thing.” Seeing their teammates Visser, Morris, and Rykal win one, “we started thinking, this is something we can do.”

So, here it is, senior year for The Boys. They say there’s a different energy this year. They’re working harder. Morale is higher. “There’s a big difference in the attitude of this team,” says Morris—now a co-captain along with Harrington, Rykal, and Genger.

These guys think they can win the conference, obviously. And they want to go to State. “We do think we can win,” Morris says.

They began their quest Sept. 3 with a 35-14 win over Whitehall, no longer a conference foe but still an arch-rival. It was Morris to Visser for six, twice, and Morris to Genger. Just like in fifth grade. “He’s been throwing to us for a long time,” Genger says of his quarterback. And it was Rykal leading the defense, with 11 tackles and a sack.

Jenny Genger watches her son and his nearly lifelong teammates and feels a lot of things. She thinks about second-grade Jake and Braden together in a baseball outfield, not really paying attention; and seventh-grade Joey toppling over Jake in a basketball game, giving him a concussion.

She remembers all these kids and their families have been through together. Sleeping over at the Morrises when the highway was too icy to drive north. Starting a Fellowship for Christian Athletes chapter at Jefferson High. Supporting each other through tough family issues. When Jake’s dad Noah, an Army battalion commander, was deployed overseas, she says, “they were there for Jake. That’s where the blessings of this friendship have really shown.” (Noah Genger is back in Montana City now—and he’s committed to being there for every game this fall.)

Jenny Genger thinks about all this, and says: “You win with attitude first. They all have each other’s backs, on and off the field.” And then: “I want this for them so bad. It’s going to be an amazing celebration if they can all do it together.”

Her son Jake added: “We’ve been looking forward to this for a long time. Since fifth grade.”