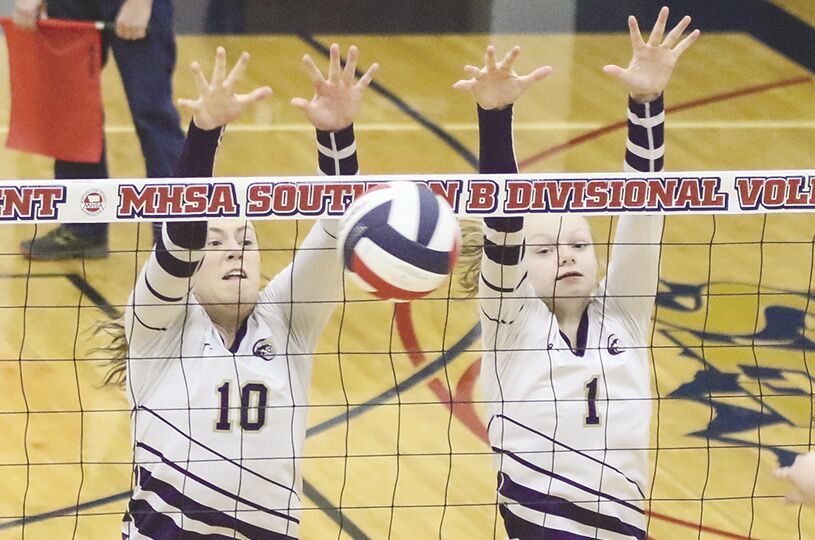 Brooklyn Pancoast and Dakota Edmisten go for a block against Colstrip. (Photo by Rose Johnson) 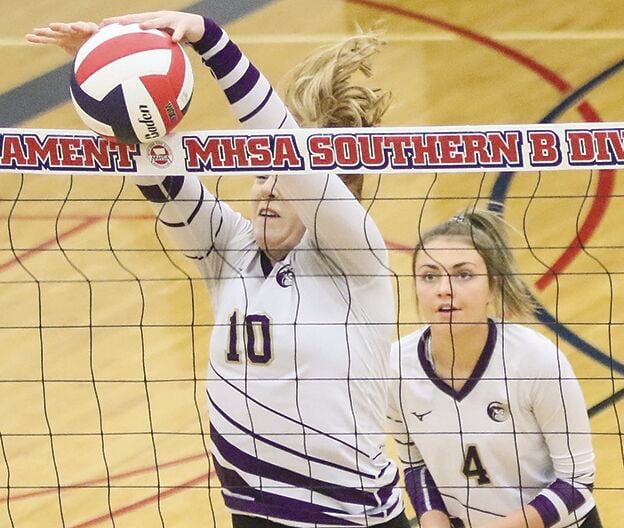 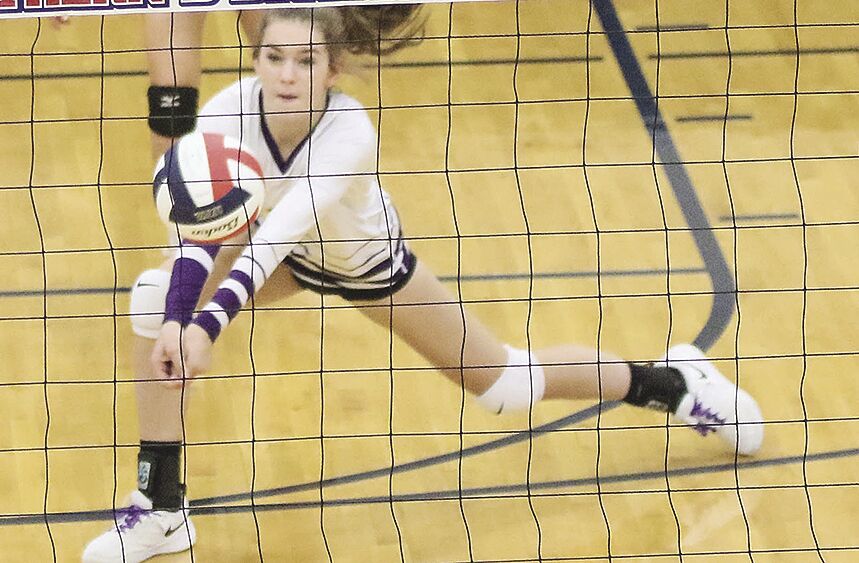 Brooklyn Pancoast and Dakota Edmisten go for a block against Colstrip. (Photo by Rose Johnson)

When you reach the Divisional volleyball tournament, there are no walkovers. That’s been especially true in Montana’s Class B South, which for years has brought together some of the state’s strongest squads.

Two years ago, an undefeated and highly heralded Jefferson High team had its quest for a state championship cut short at Divisionals. This year, another undefeated Panther team likewise made it to the Divisional tourney in Red Lodge – but couldn’t make it out.

The first match, on Thursday, was with Roundup. In the first set, the Panthers tied the score at 9 on an ace by Maddie Leiva and again at 14 on a kill by Hope Dobyns. But Roundup outscored Jefferson from there, 11-6, to pull out the set, 25-17. Double-hit calls hurt the Panthers; I’m not sure if I have ever witnessed that many in a match.

In the second set a block by Brooklyn Pancoast put the Panthers up 2-0, and Dakota Edmisten put the Panthers up 8-4. Rachel Van Blaricom put a sneak over to make it 11-7, and Sydney Mace scored an ace for a 14-11 lead. From then on, though, the Panthers struggled to put points on the board. Breaks went Roundup’s way as they produced a 14-3 run to take set two, 25-17.

The third set was a marathon. The teams were tied three times in the early going, before a block point by Hope Dobyns produced an 8-6 lead, and a couple of kills by Edmisten made it 13-10. The teams were knotted many times up to 25 — and then well beyond, before the Panthers took the win, 35-33.

The fourth set saw Jefferson go up 6-5 on a Sam Zody point and a serve by Grace Alexander that hit the net and fell over made it 7-6. Then, once more, it turned into a fierce battle. The score was tied at 12, then Roundup took the next four points for a 23-18 lead. The Panthers fought back, pulling to within one point on a Van Blaricom kill and a Dobyns block, but Roundup prevailed for the 25-23 win and the match.

Grace Alexander led the team with 27 digs, while Van Blaricom and Zody each had 22 digs, Leiva 20 assists, Edmisten 26 kills, and Dobyns five blocks.

The loss put Jefferson in the consolation bracket against a tall Forsyth team. This exciting match would go five sets. In the first, Forsyth jumped out to a 7-3 lead before Van Blaricom responded with a pair of aces. Then, down 18-13, the Panthers fought back, with a Leiva score and two Edmisten kills bringing them back to 20-19. Van Blaricom added two kills to tie the score at 23 — but Forsyth was able to put over the last two points to win 25-23.

Set two was close most of the way. Jefferson went up early 7-4 on an Edmisten kill, Forsyth came back to lead 12-9, and then the Panthers crept back, with an ace by Mace tying the score at 12. The teams were tied at 14, 15 and 16 before the Panthers took over. A score by Leiva scored followed by a kill by Edmisten and a block by Pancoast and a Grace Alexander ace led to a 25-19 win.

Forsyth took the third set, 25-18, leaving the Panthers in a do-or-die situation. But Jefferson responded in the fourth, winning a close one, 25-23, on a Van Blaricom kill.

The Panthers had fire in their eyes in the fifth and determining set, jumping out to a 7-2 lead, Edmisten made it 13-9 to provide a little breath of air, Dobyns made it 14-9 and the panthers finally took the win, 15-9. Alexander led the squad again with 32 digs along with one ace and one assist. Van Blaricom added three aces, 16 kills, and 16 digs; Leiva one ace, two kills, one block, 19 assists, and 10 digs; Dobyns one kill, two blocks, and four digs; Edmisten one ace, 20 kills, one block, one assist, and 22 digs; Zody 13 assists, and 22 digs; Emma McCauley one assist and 16 digs; Maddy Johnson 10 digs; Bailey Toney one dig; Mace one ace and one dig; and Pancoast one kill, one block, one assist, and three digs.

Then came Colstrip, a strong team that won the 3B title. The teams stayed close in the first set, with the Panthers working their way to a 13-9 lead on a tap by Van Blaricom. Dobyns made it 16-14 with a block, and Jefferson went on to a 25-18 win.

Colstrip started the second with a 8-3 run and widened its lead to 16-8 before the Panthers started fighting back, pulling to 16-12 on a Dobyns block, an Alexander ace and a block by Abbie Youde. But they could not overcome the slow start, falling on the wrong end of a 25-18 score.

In her final high school game, Alexander notched 34 digs, one ace and one assist. Van Blaricom had 11 kills, one ace, and seven digs; Leiva 16 assists and seven digs; Dobyns one kill and one block; Edmisten 18 kills, two blocks, and 12 digs; Zody one kill, 13 assists, and 24 digs; McCauley one assist and four digs; Johnson one ace and three digs; Youde one block; Toney one dig; Mace two digs; and Pancoast one kill, two blocks, and five assists.

It was a disappointing loss, but the Panthers played very well, finishing the shortened season with a 13-2 record and the District 5B title. They lose some great seniors but will be returning seven juniors and one sophomore next year for a strong core.

Jefferson High sports will take a break until practice starts December 7 for girls and boys basketball, wrestling and cheer.