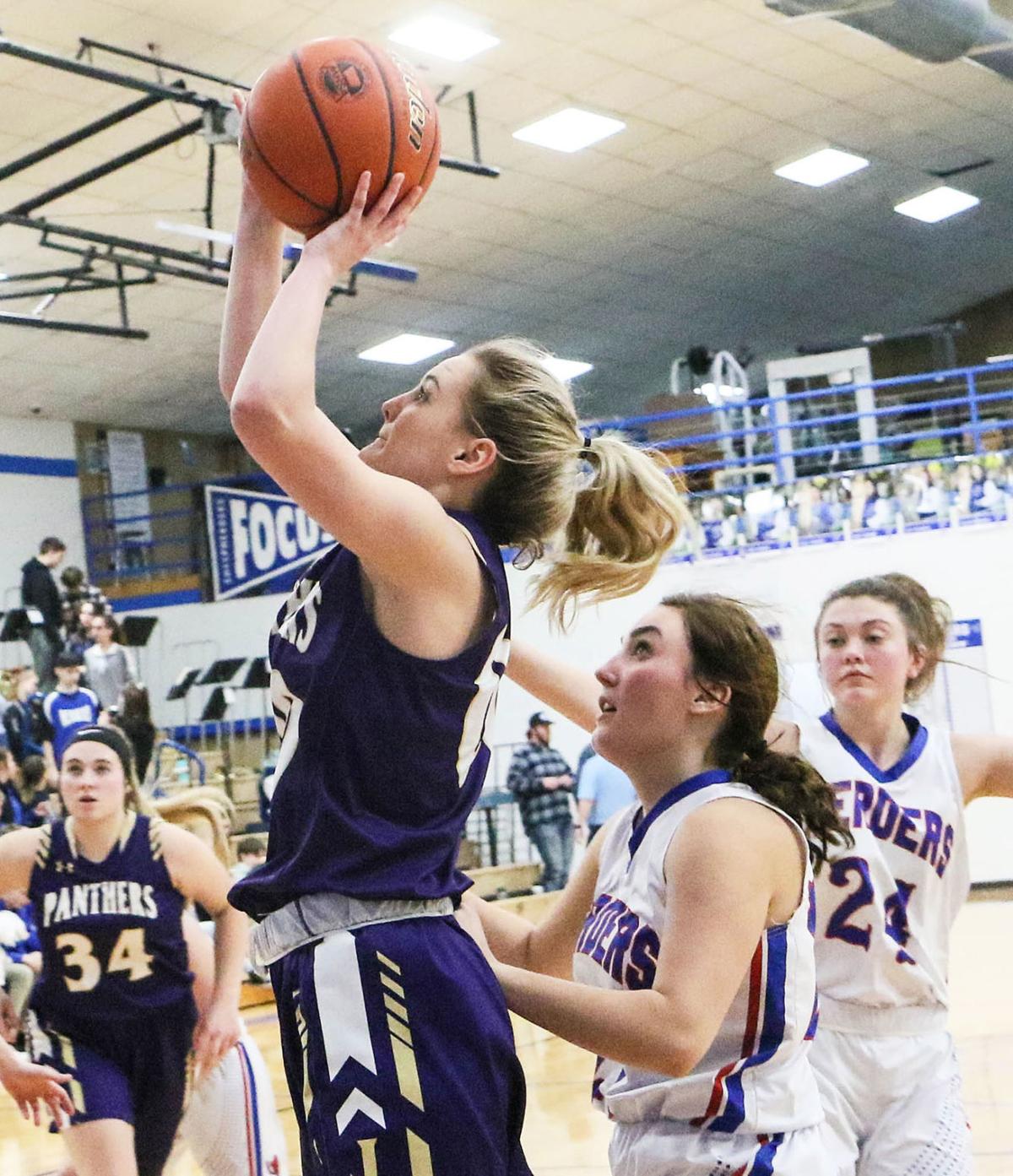 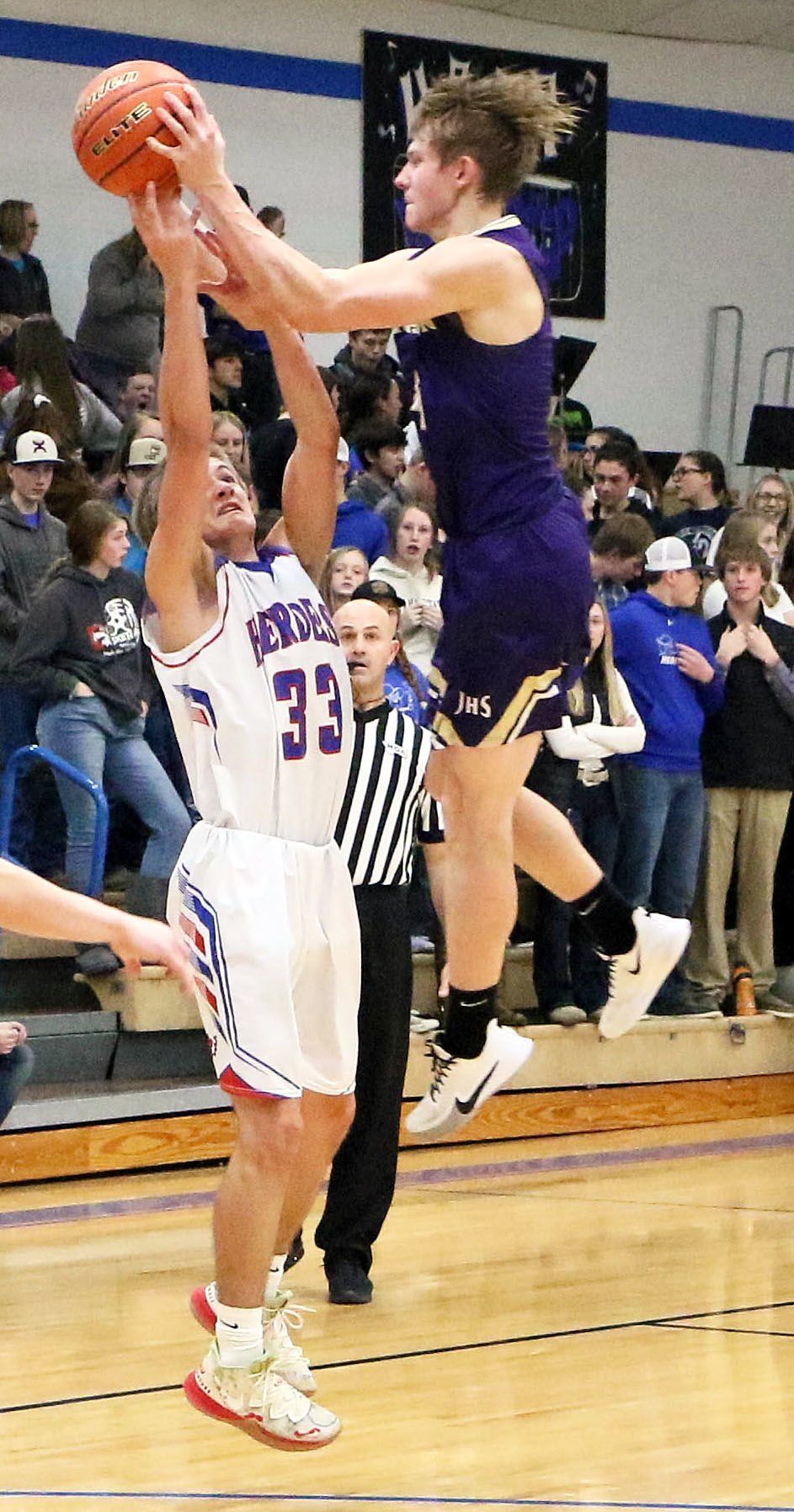 Avery Stiles gets away with a steal against Big Timber.

Avery Stiles gets away with a steal against Big Timber.

Basketball is in full swing at Jefferson High, with eight of 18 scheduled games in the books. The Panther boys picked up two wins over the weekend —by 65-49 over a scrappy White Sulphur Springs team and by 43-41 in a great match-up with Sweet Grass County in Big Timber.

In White Sulphur Springs, the Panthers were a little surprised by the Class C Hornets, who surged to a 10-7 lead in the first four minutes. Coach Anthony Connole called a time-out to shift the flow, reminding his squad to play better defense.

And that did the job: Down 11-13 after one period, Avery Stiles hit a two, Josiah Williams hit a pair of free throws and Stiles added an old fashioned three-pointer to put the Panthers up 18-13, a lead they would not lose again. Tyler Harrington added a two, and a great assist by Jaxson Yanzick to Braden Morris produced another bucket. A Trent McMaster three-pointer and a Joey Visser two ended the first half scoring, with the Panthers up 32-19.

Jefferson rolled to a 46-28 lead at the end of three — and then the bench saw action in the fourth as the Panthers cruised to the win. Scoring leaders were Stiles with 19, Visser with 15, and McMaster with 14.

Saturday saw a defensive battle with the Herders in Big Timber, a close match that kept both sides on edge. Williams put the first points on the board just shy of two minutes into the game, and the Panthers were down one after the first quarter. Harrington started the second with two baskets, and a three by Stiles provided a 21-14 halftime lead.

The Herders came back to take a 34-32 lead heading into the final 8 minutes of play. But in the fourth, Morris provided some spark with two baskets, and a long pass from Yanzick to Harrington tied the score at 40. Williams put up his 11th point of the game with 2:10 remaining for a two-point edge, and then Coach Connole instructed the Panthers to play a control game. The Herders had a chance to tie the game with five seconds left but missed one free throw out of two, and McMaster hit one of two with three seconds left to seal the win.

Williams was the only Panther to score in double figures with 11; Stiles had 9, Harrington 6, and Yanzick 5. Conor Giesecke led Sweet Grass County with 15. The win puts Jefferson in a tie for third place in the district standings.

The Lady Panthers traveled to Manhattan Christian last Thursday night for a non-conference game, replacing their canceled match-up with White Sulphur Springs. The Panthers dug themselves an early hole as they found the taller Eagles hard to keep away from the basket; Manhattan Christian closed out the first period with a 9-1 run to go up 19-8.

The Panthers came back in the second as Emma Grange and Ashton Oxarart both scored off steals – Grange twice – to cut the deficit to three. Dakota Edmisten nailed a three-pointer, and Jefferson ended the half down just 30-26. Two baskets by Grace Jones tied the game at 30 with 6:22 left in the third, but the Eagles closed out the third with another run for a seven-point edge.

Oxarart started the fourth with a three, but a cold spell doomed the Panthers, and Manhattan Christian sealed the 59-45 win. Jones led the panthers with 15 hard-earned points, while Grange added 7.

Against the undefeated and league-leading Sheep Herders in Big Timber, the Panthers clearly missed their leading scorer, Rachel Van Blaricom, still out with an ankle injury. The Herders, led by some sharp shooters as well as a couple of 5’11” girls, jumped out to an 18-6 lead before Laurynn Armstrong hit a free throw and Abbi Youde followed with a two to cut the deficit to nine.

The second quarter was slow going for both teams, and the halftime score was 26-14, Herders. But the second half saw Sweet Grass County outscore Jefferson 29-10, as they cruised to a 55-24 win. Grace Jones led the Panthers with 9 points.

This week the Panthers host Deer Lodge for “Pack the House Night” on Thursday, then travel to Townsend on Friday night.