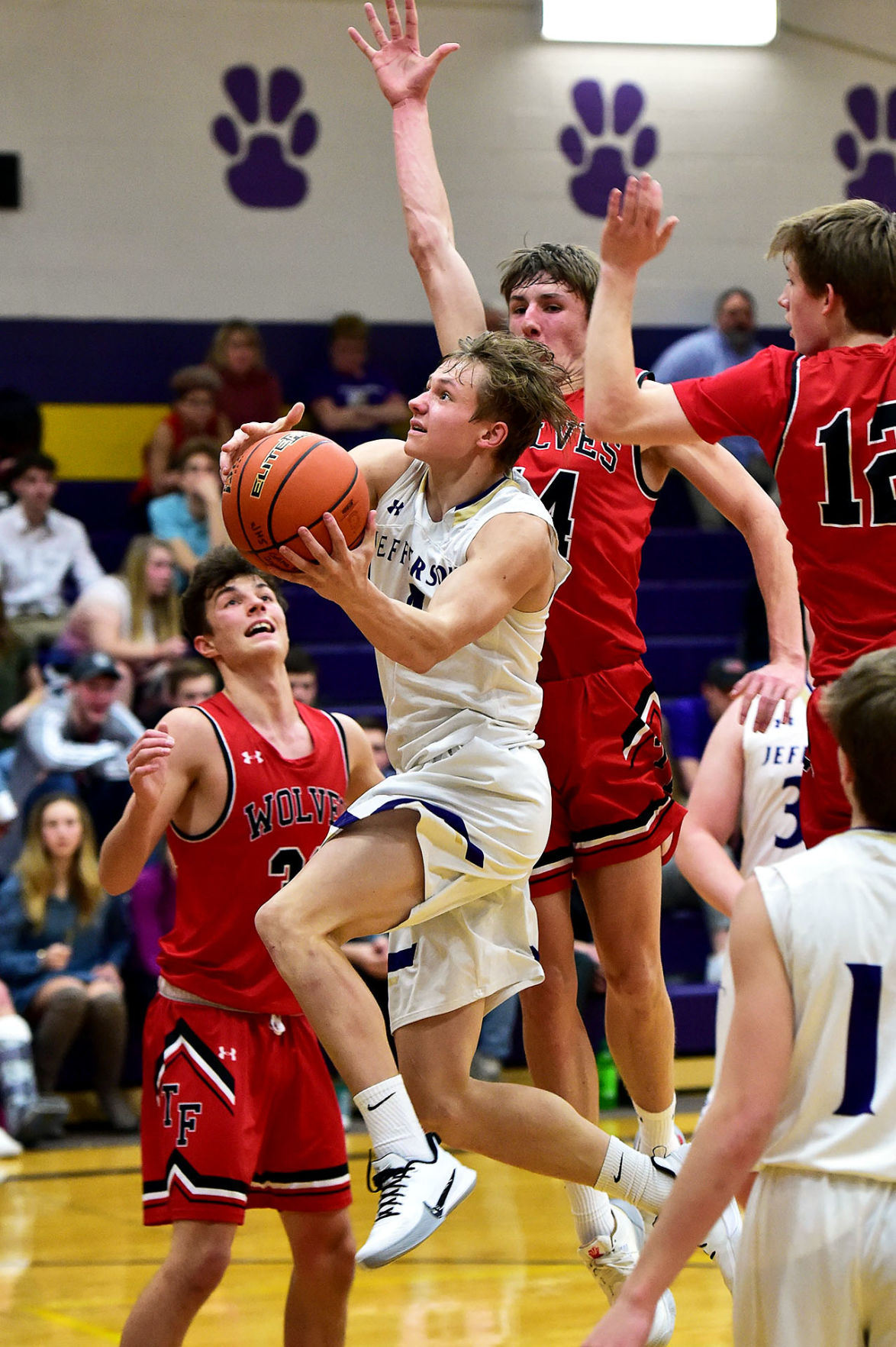 Panther Avery Stiles weaves through a crowd of Three Forks athletes on his way to the basket. 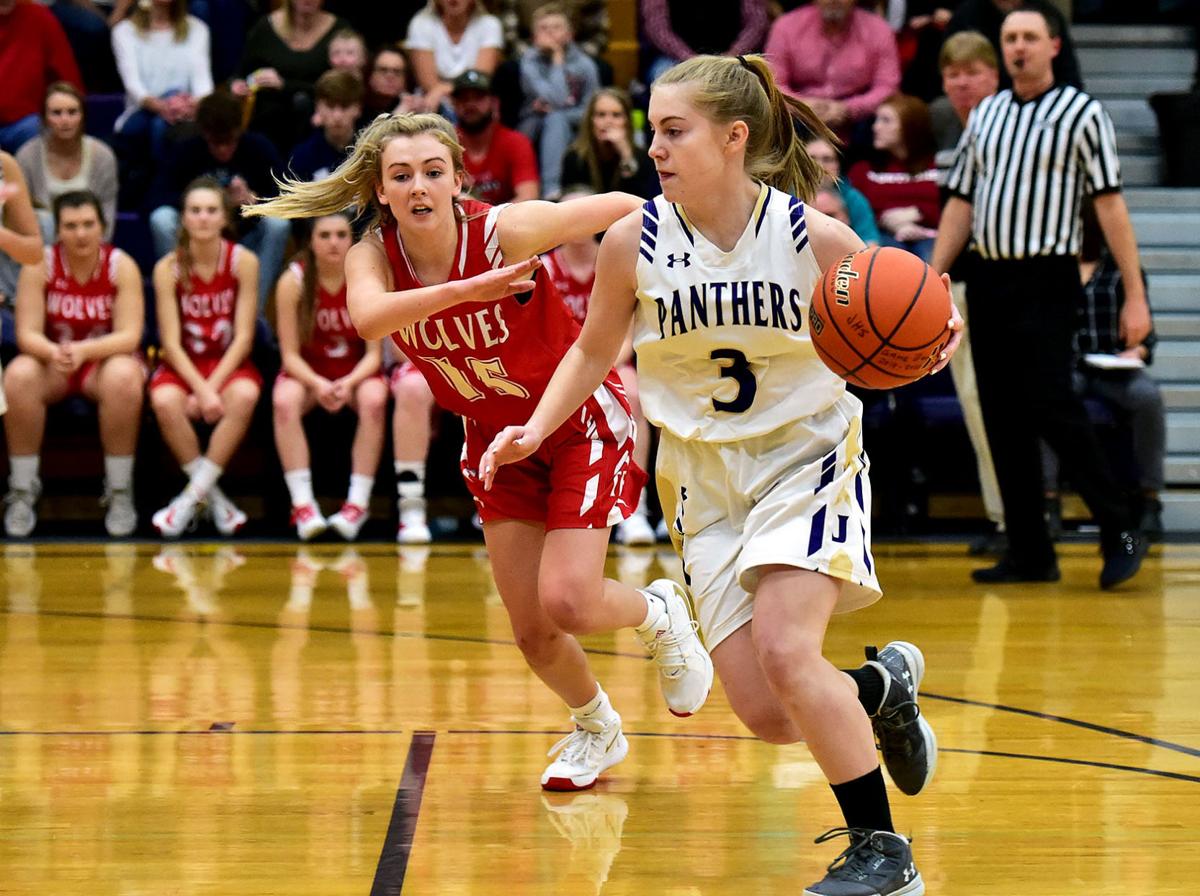 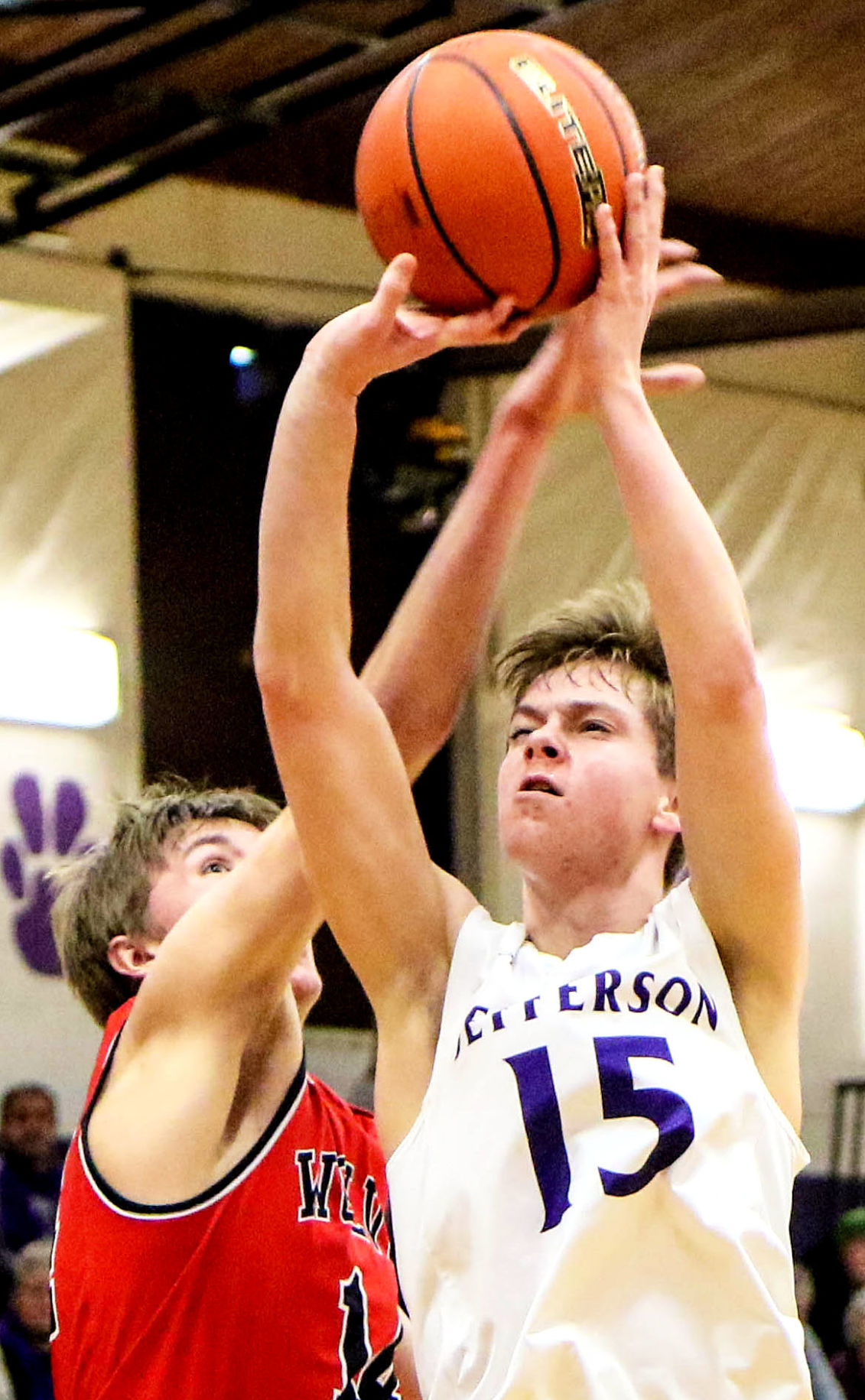 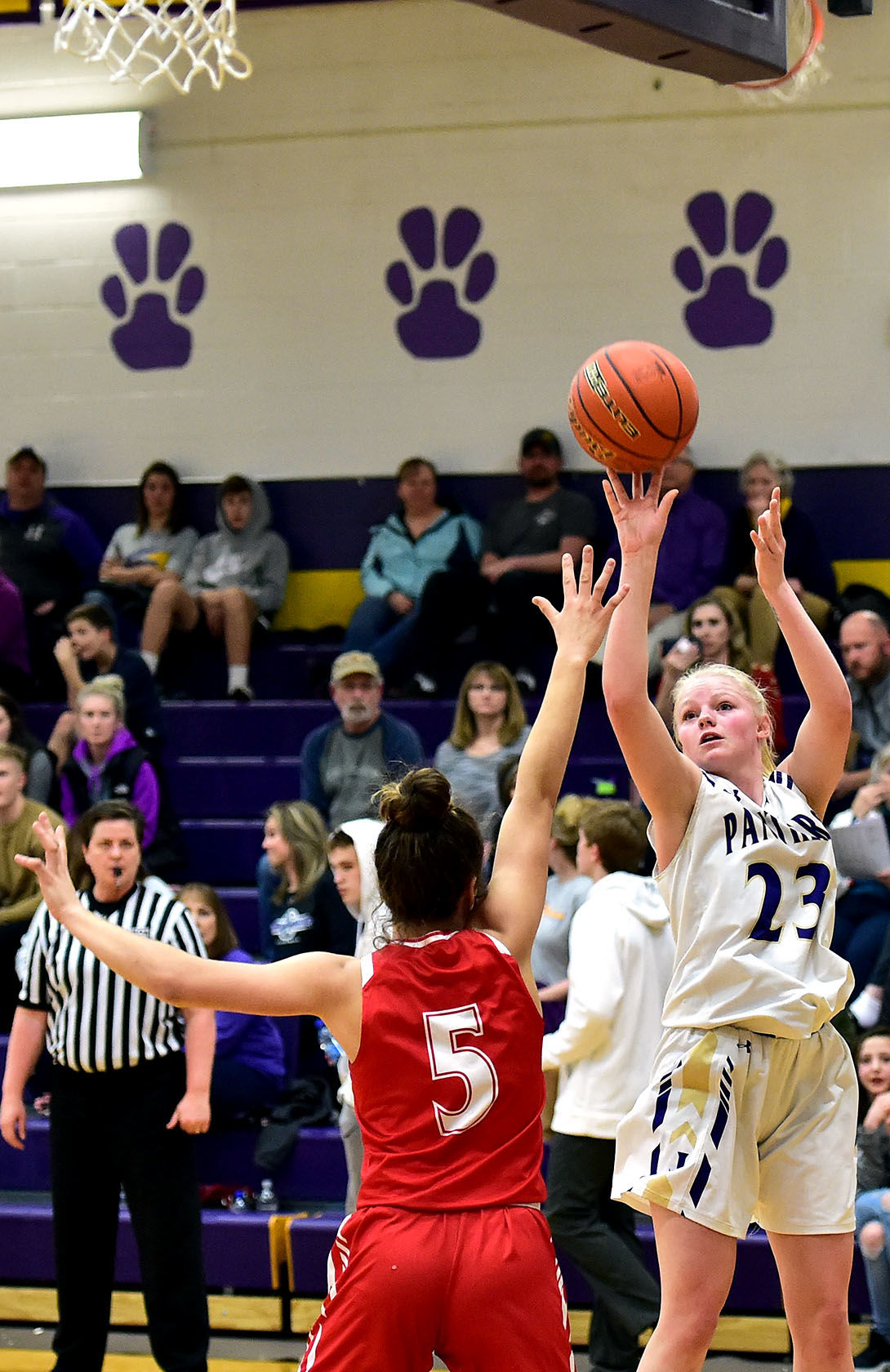 Mykala Edmisten shoot over the outstretched arm of Keaton Lynn from Three Forks.

Panther Avery Stiles weaves through a crowd of Three Forks athletes on his way to the basket.

Mykala Edmisten shoot over the outstretched arm of Keaton Lynn from Three Forks.

Jefferson High’s girls basketball team hit up against the reality that it is one squad with Rachel Van Blaricom, and a different one without.

Van Blaricom, the sophomore standout who leads the Panthers in scoring, hurt her ankle in practice last Thursday. It turned out to be a sprain and not a break, as had originally been feared – but it was bad enough to keep her out of the weekend’s two games.

Without her, the Lady Panthers came up in short in non-conference match-ups with Three Forks and Choteau. They made both games close, but came out on the losing end.

The Panthers owned the second, outscoring the Wolves 19 to 12, including a 10-5 run in the fourth quarter, but the damage had been done.  Final: 33-27, Three Forks. Dakota Edmisten and Laurynn Armstrong each had six points, while Grace Jones and Olivia Lyons chipped in four each.

The next day, the Panthers traveled to Choteau. They took an early 6-2 lead, but Choteau came back to go up 14-11 at the end of one. Laurynn Armstrong started the second with a three to tie the score at 14, and a two by Dakota Edmisten gave the Panthers a 16-14 lead – but again, Choteau fought back for a 24-20 edge at the half.

The third quarter was the difference: Choteau went on a 19-10 run to go up 43-30 with eight minutes remaining. The Panthers exploded for 22 points in the final period, but it wasn’t enough. Choteau held on for the 58-52 victory. Mykala Edmisten led the Panthers with 14 points, while Jones and Armstrong contributed 10 each.

Jefferson’s boys also dropped two. Against Three Forks, the Panthers led just once, when Jaxson Yanzick dropped a three 48 seconds into the contest. After that, the Wolves put on the pressure and showed their speed, rushing to a 24-10 lead at the end of the first. The Panthers came back in the second with determination, led by Josiah Williams’ seven points. Jefferson cut the deficit to four with 2:45 remaining in the half, but the Wolves bumped it up to nine, 41-32 at the buzzer.

Three Forks came out on fire in the second half. A pair of baskets by Derek Nygaard kept Jefferson in range, 51-38, but a run by the Wolves gave them a 67-45 lead heading into the final eight minutes of play. The Panthers kept battling in the fourth, eating into the Wolf lead a little at a time. Avery Stiles hit nine of his 13 points in the period, as the Panthers outscored the Wolves, 16-9 in the fourth. But the final was 76-61. Nygaard led the panther scoring with 16 points, while Stiles added 13, Trent McMaster 8, Josiah Williams 7, and Yanzick 6.

In Choteau, the Panthers were slow to get going, and found themselves down 5-0 before Yanzick knowed down a three. That started the Panther engine, as Stiles added a three, Nygaard a two, McMaster a three and Brandon Morris another three to give Jefferson a 14-8 lead. A rare four-point, a made three with a foul, brought Choteau to within two, but another Stiles three at the buzzer gave the Panthers a 20-15 edge after one.

Jefferson continued to shred the Choteau defense in the second period, building a 37-30 lead, and McMaster started the third with a three to bump the margin up to 10. Sooner after, though, the Panther offense stuttered, and the Bulldogs took advantage, pulling to 47-43 at the end of three and taking the lead early in the fourth. McMaster briefly put the Panthers back on top, 49-48, but from then on it was Choteau’s game. The final: 65-57. Stiles led Jefferson with 21 points on seven three-pointers. McMaster added 14, and Braden Morris 9.

The Panthers will hit the road in different directions this week. On Tuesday, Jefferson’s C teams were set to host Sheridan’s JV squads. The JV and varsity girls and the C boys travel to Manhattan Christian on Thursday, and the C girls and JV boys travel to White Sulphur Springs on Friday. On Saturday, all teams go to Big Timber to take on the Sweet Grass County Herders.

How about a story on the undefeated girl's junior varsity basketball team?