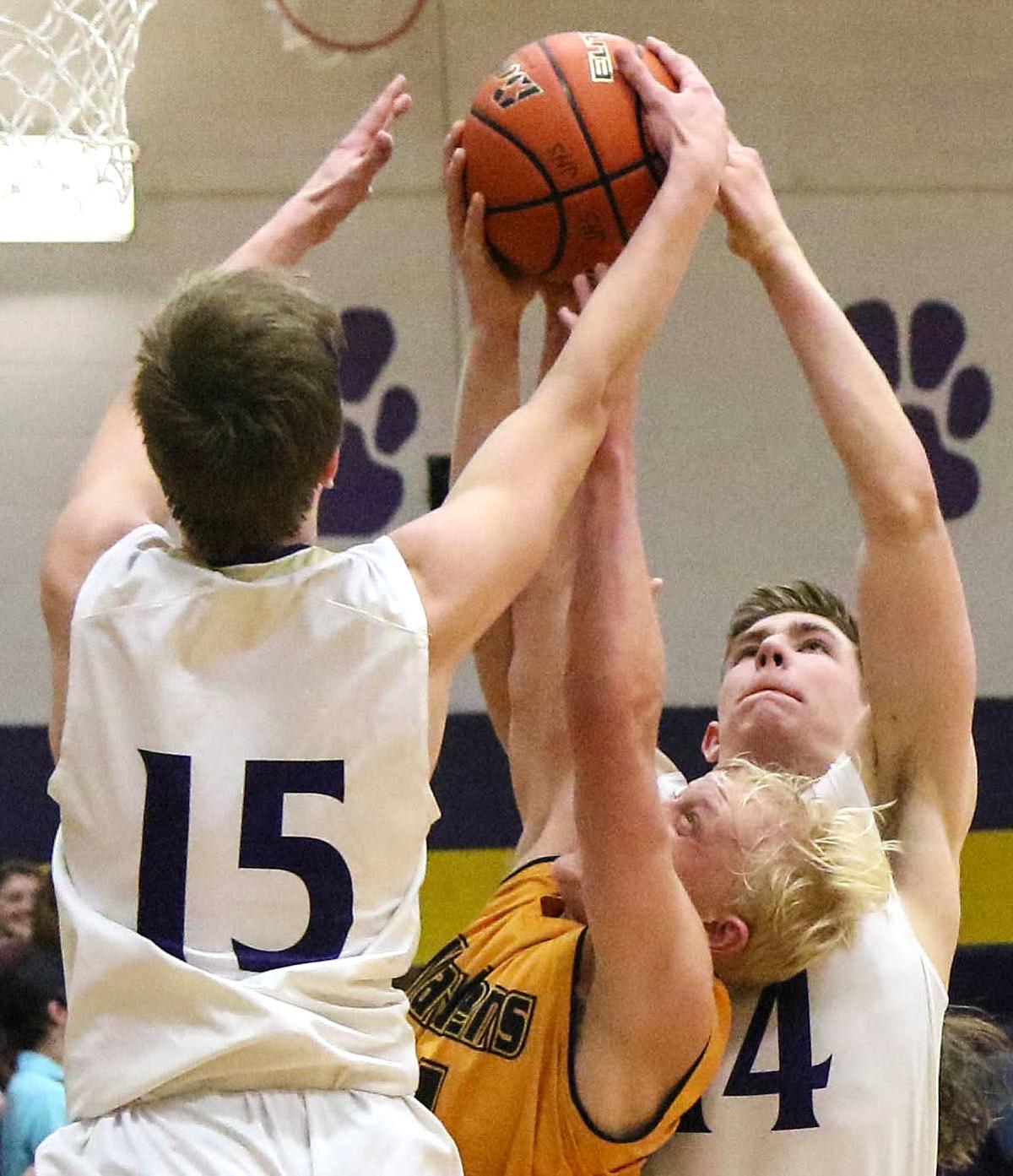 Josiah Williams and Trent McMaster out rebound a Warden player. 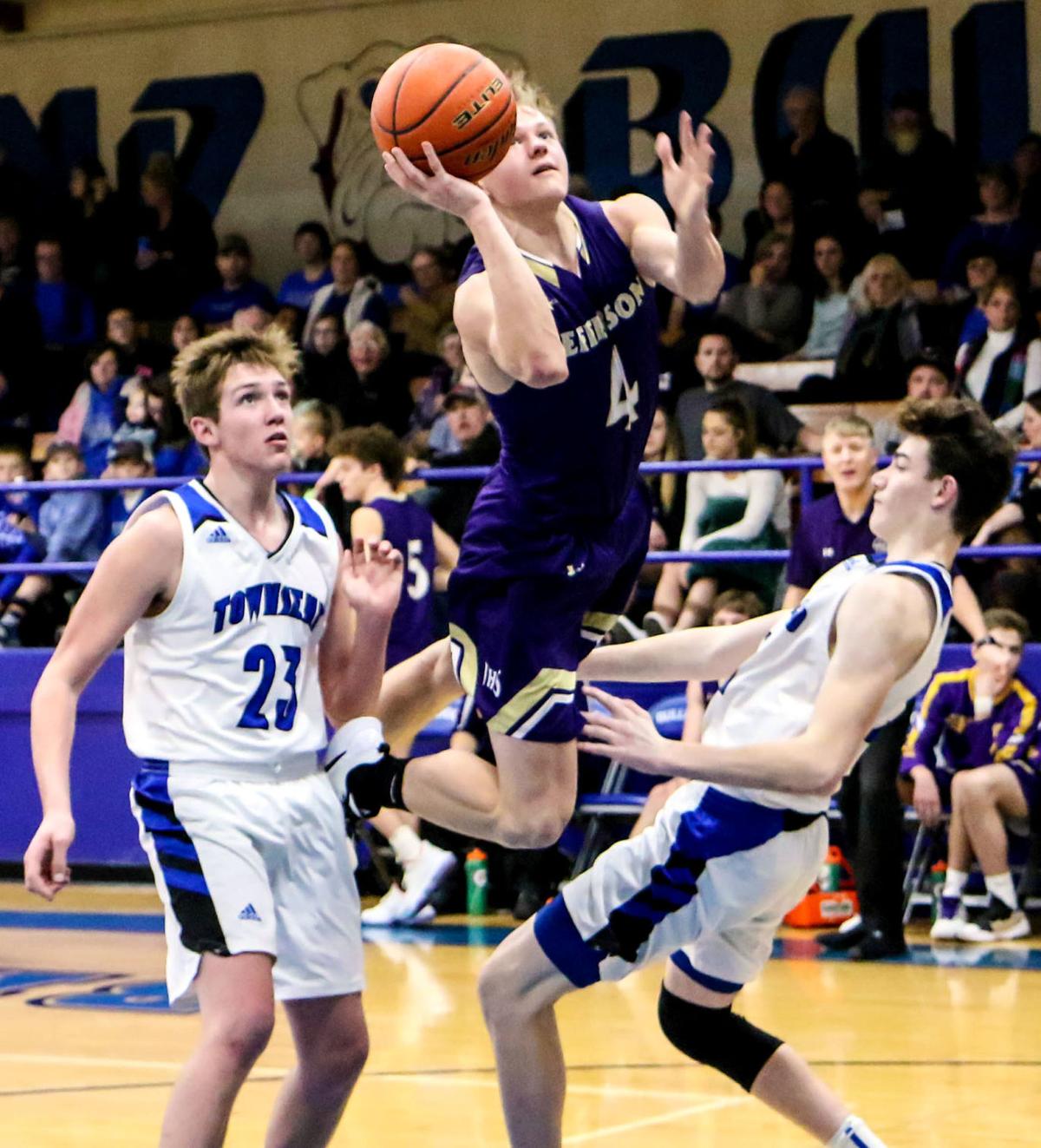 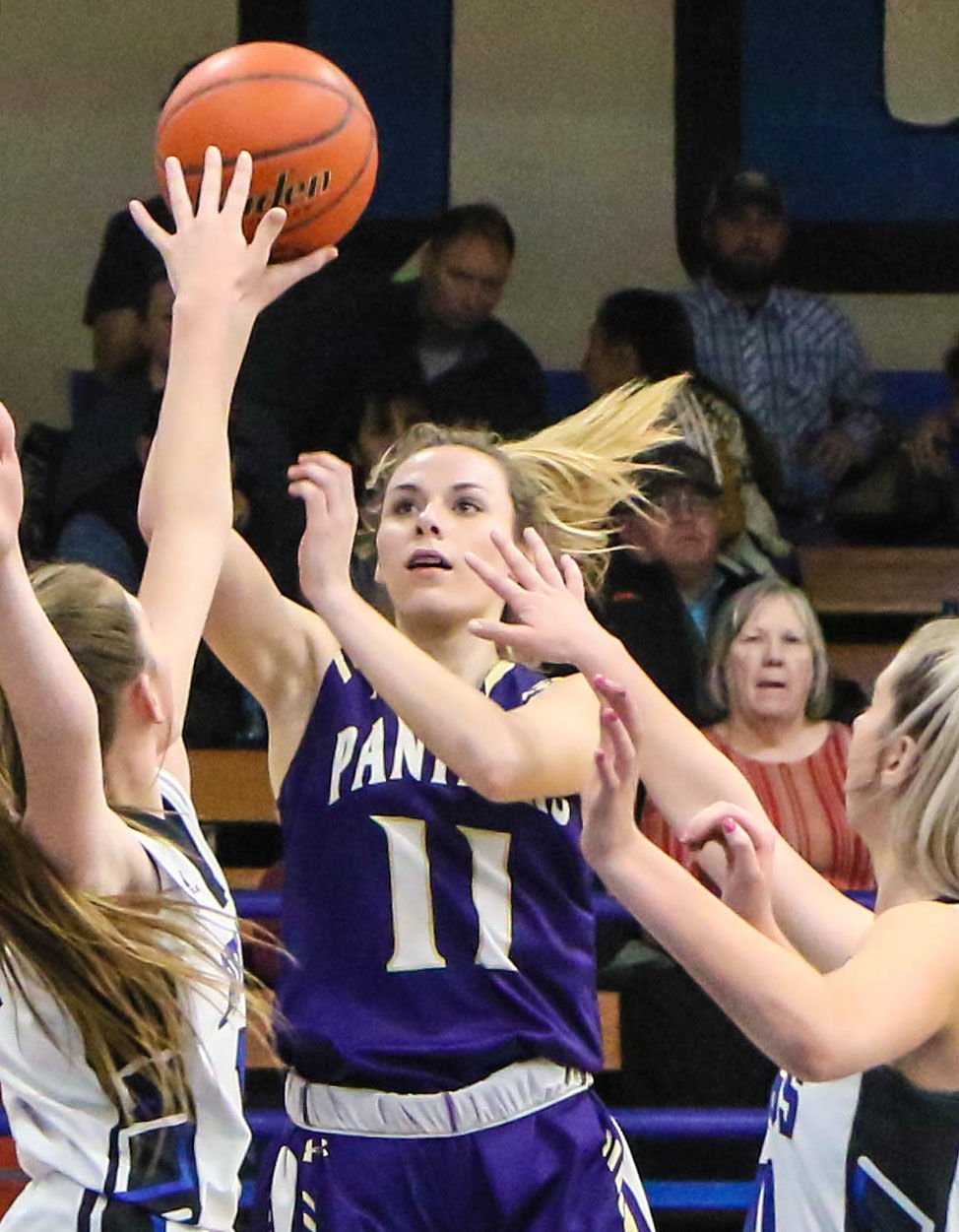 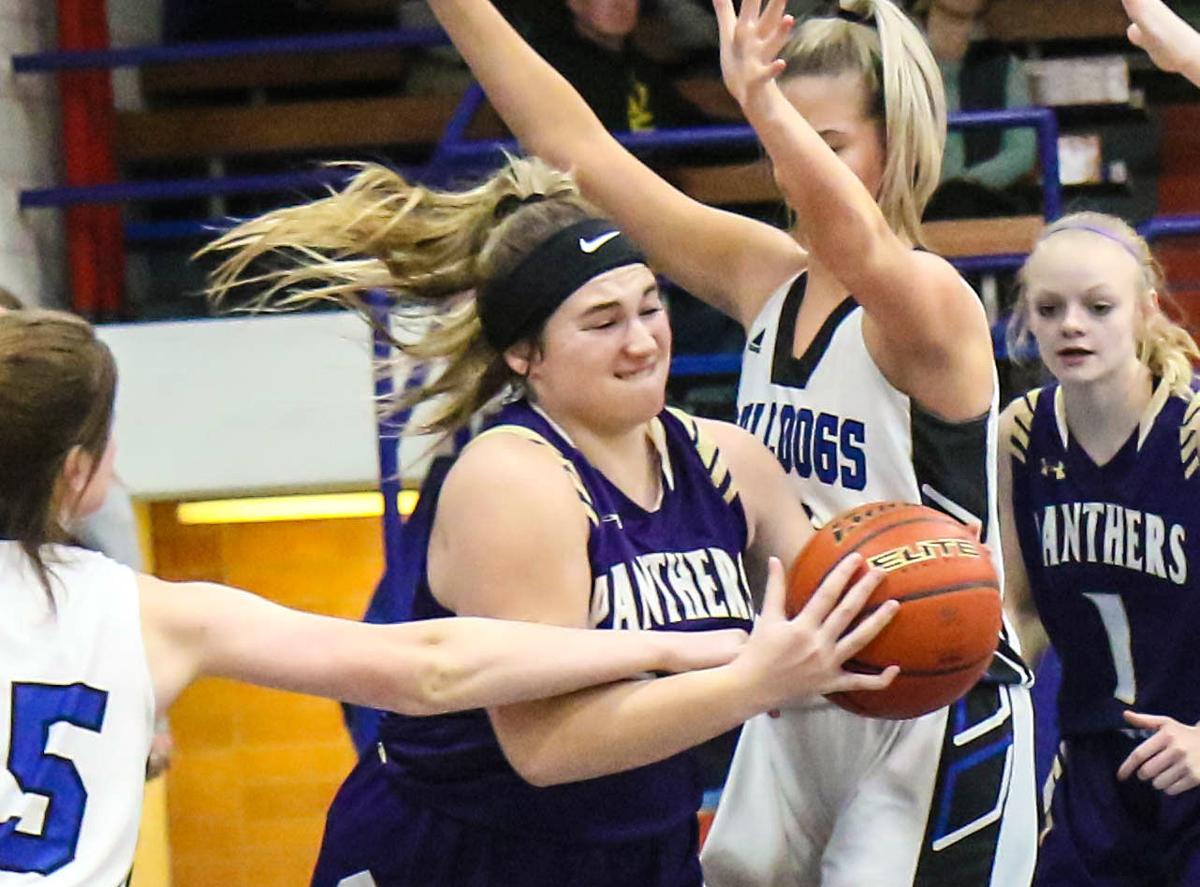 Josiah Williams and Trent McMaster out rebound a Warden player.

Van Blaricom, who missed two weeks of play after spraining an ankle in practice, was able to ease back into play just in time for Thursday’s “Pack the House Night” – and the Lady Panthers’ reunion with their leading scorer in front of a raucous home crowd was a happy one.

In the match-up against Powell County, Emma Grange started the scoring 30 seconds in. Grace Jones added a two, Laurynn Armstrong hit another, and Ashton Oxarart nailed a three to put the Panthers up 9-0 at the end of one.

Jefferson continued to pull away in the second. Dakota Edmisten put down a three, and scores off steals by Oxarart and Van Blaricom sent the Panthers up 23-6. The girls kept the pressure on in the third, padding their lead to 34-15. With the Panthers subbing freely in the final period, the Wardens closed the gap a bit – but the final was 41-26, Jefferson. Oxarart led the scoring with 11 points, while Van Blaricom added 7 and Jones 6.

The next night, the Panthers traveled to Townsend for an important conference contest. Mykala Edmisten and Grange scored in the first two minutes, but the next three went by without a Panther basket – and the Bulldogs came back to tie the score at 6 after one.

Olivia Lyon started the second with a basket, and the score stayed tight, with both teams struggling to find the basket. Van Blaricom’s steal and score ended the half with the Panthers up 14-11. The scoring drought continued in the third, and the tally was just 16-14, Jefferson, going into the final period.

Sam Zody started the fourth with a basket, and the Panthers took a 21-14 lead with 6:55 left. The Bulldogs answered with four points, but Jefferson came back with a 10-5 run – and that was all they needed. Final: 31-23. Mykala Edmisten and Van Blaricom each had 8 points.

The Panther boys, meanwhile, came up short twice, losing 48-41 to Powell County and dropping a tough one at Broadwater, 44-45.

Facing Powell County, Trent McMaster’s two baskets staked the Panthers to an early 4-3 lead, but the next six points went to the Wardens as the Panthers’ shooting went cold. Josiah Williams finally made one of two free throws, but Jefferson was down 9-5 at the end of one.

The Panthers’ dry spell continued through the second quarter, as they managed just five points. But Powell County struggled, too, leaving the score just 14-10 at the half.

Things started heating up in the third. Avery Stiles hit a three, Jaxson Yanzick and McMaster connected on two for a 17-16 lead with 5:40 left, and a bucket by Tyler Harrington tied the score at 19. But then the Wardens went on a 9-2 run that left the Panthers down by seven going into the final eight minutes.

Four three pointers in the first four minutes of the last period gave the Wardens the edge they needed. Avery Stiles completed a rare four-point play to energize his team, and the Panthers clawed back to within three with 15 seconds left – but the Wardens held on for a 48-41 win.

I’m not sure if I’ve ever seen a game where a team hit just one two-point shot – but Powell County did just that, making up for it with 11 three-pointers and 13 of 18 free throws. Stiles led the Panthers with 16 points, including four threes, while McMaster added 9 and Harrington 6.

In Townsend, Stiles started the scoring with a three-pointer, then stole the ball and scored to put JHS up 5-0. He added another seven points in the quarter and Harrrington notched a three for a 15-7 Jefferson lead. Yanzick started the second with a three and a free throw, Williams hit a two, and a nice assist by Yanzick to Derek Nygaard made it 23-9 with 3:30 left in the quarter. But Broadwater put in the next 8 points to make it 23-17 at the half.

Williams started the third with five points, and Stiles added a basket for a 30-17 Panther lead. But suddenly, Jefferson’s shooting went cold, and Broadwater pulled to within six heading into the final quarter. Things didn’t improve for the Panthers in the fourth, as they struggled to make anything good happen – including free throws. Jefferson made 2 of 10 from the line, allowing the Bulldogs to come back for a 38-38 tie at the end of regulation.

A Panther turnover to start overtime led to the Bulldogs’ first lead of the game. After that, the teams traded free throws until Stiles hit a three with less than 10 seconds left to tie the game at 44. Broadwater made one of two free throws with 4 seconds left, and the Panthers’ final shot failed to drop, allowing Broadwater to escape with a 45-44 win.

The Panthers were 9 of 27 on free throws for the game, while the Bulldogs went 12 of 23 – and that was the difference. Stiles led the scoring with 22 points, while Williams added 7 and Yanzick 6.