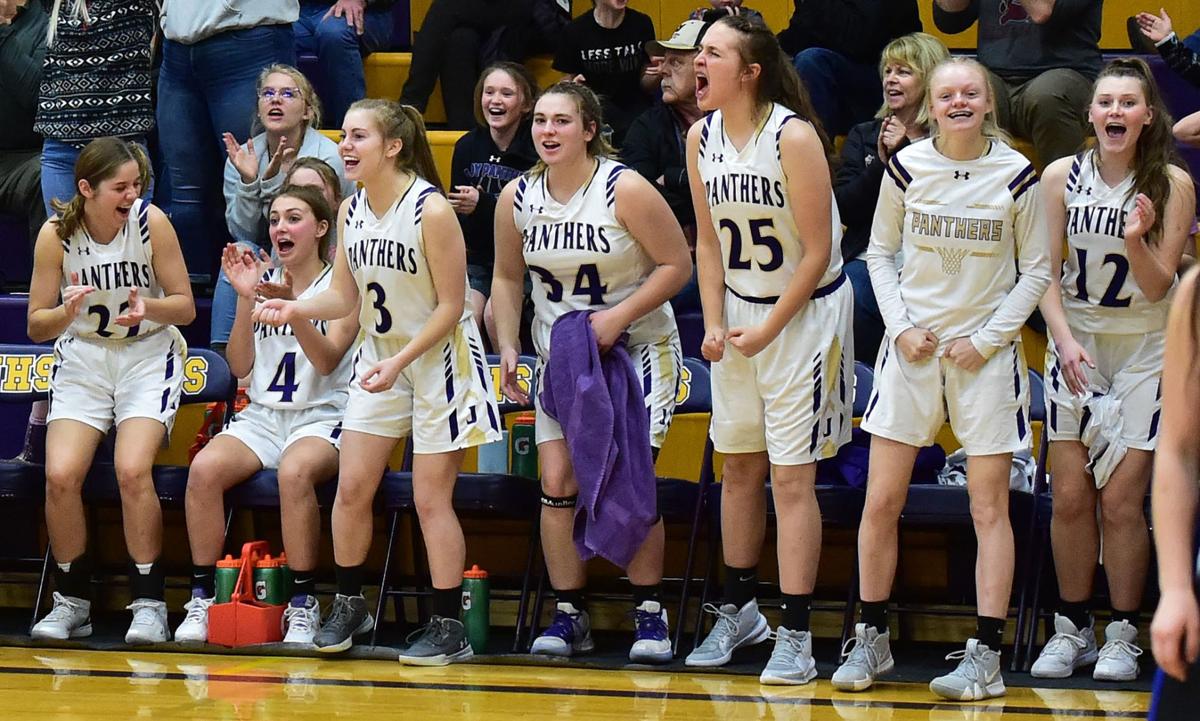 The Lady Panther bench cheers their teammates during their triple-overtime win against Broadwater. 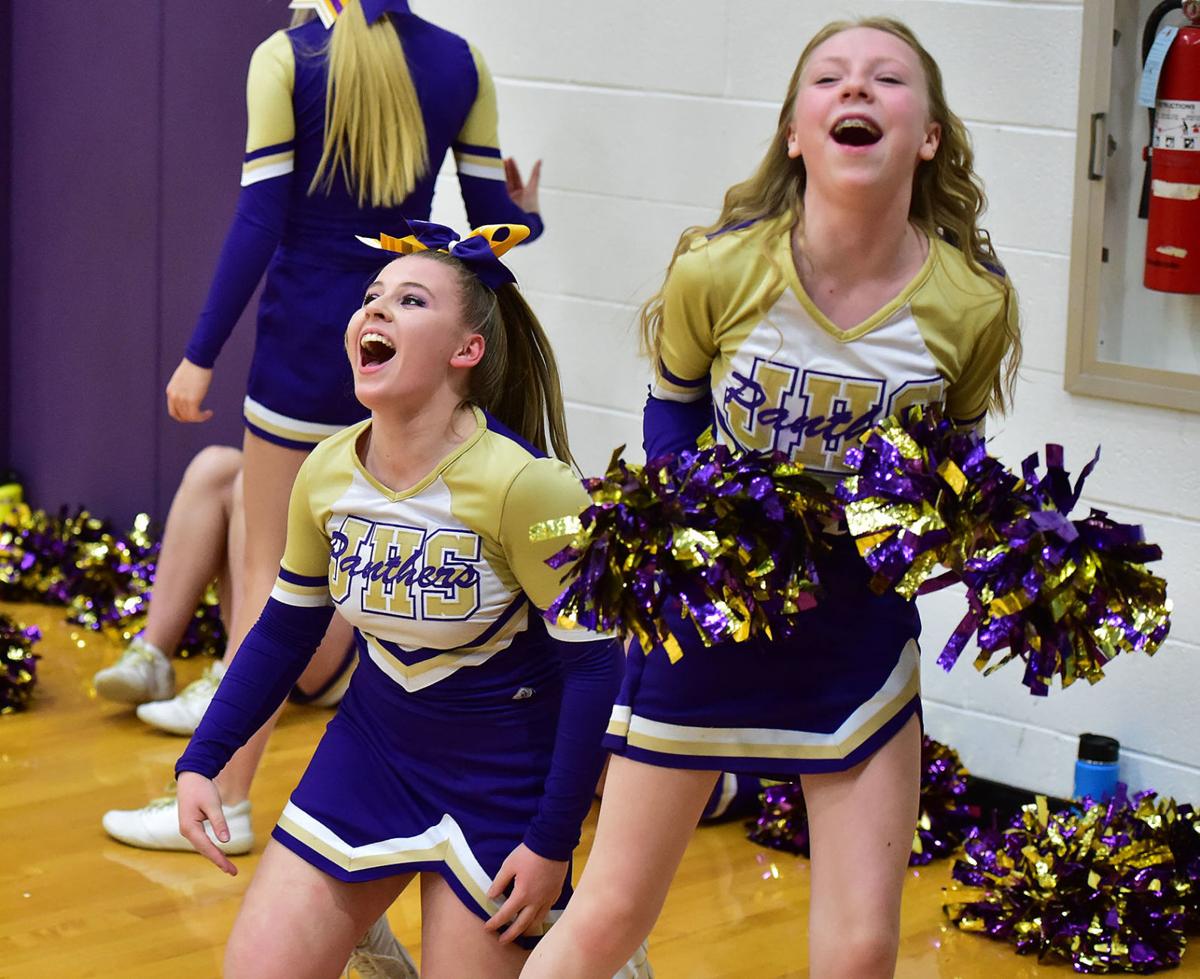 Morgan Walters, right, and Allie Supalla cheer the Lady Panthers in their game against Broadwater. 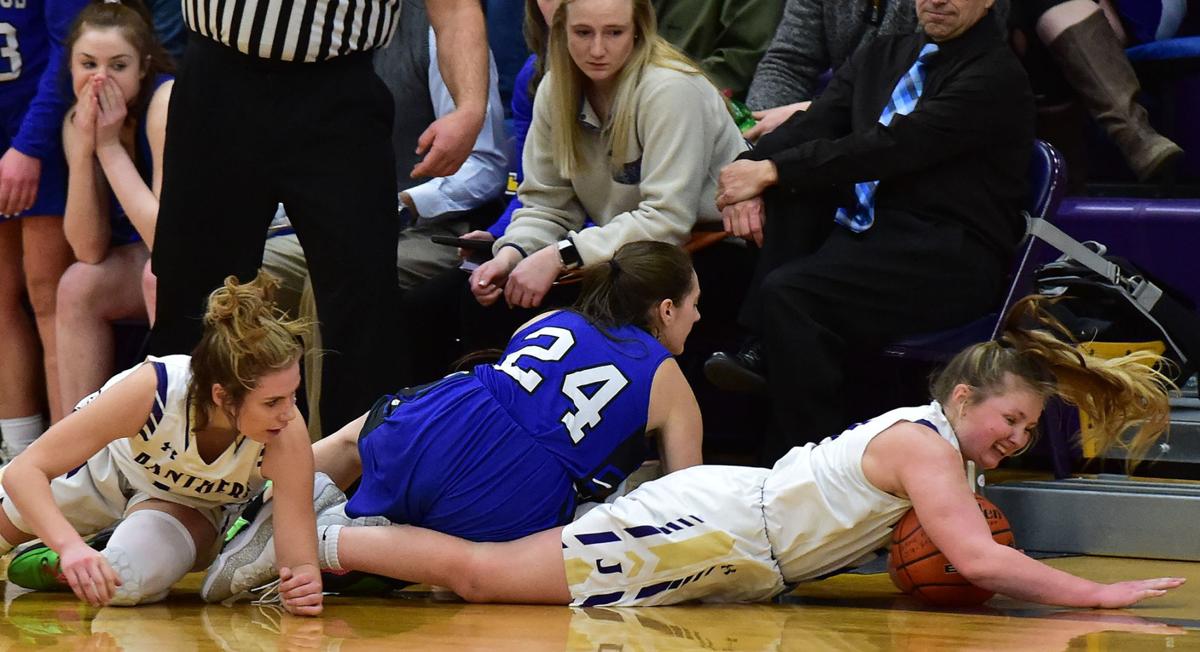 Laurynn Armstrong, right, slides and nearly collides with the stairs in an effort to save a loose ball during the Panther girls’ triple-overtime, home-court 62-55 win against Broadwater Saturday. 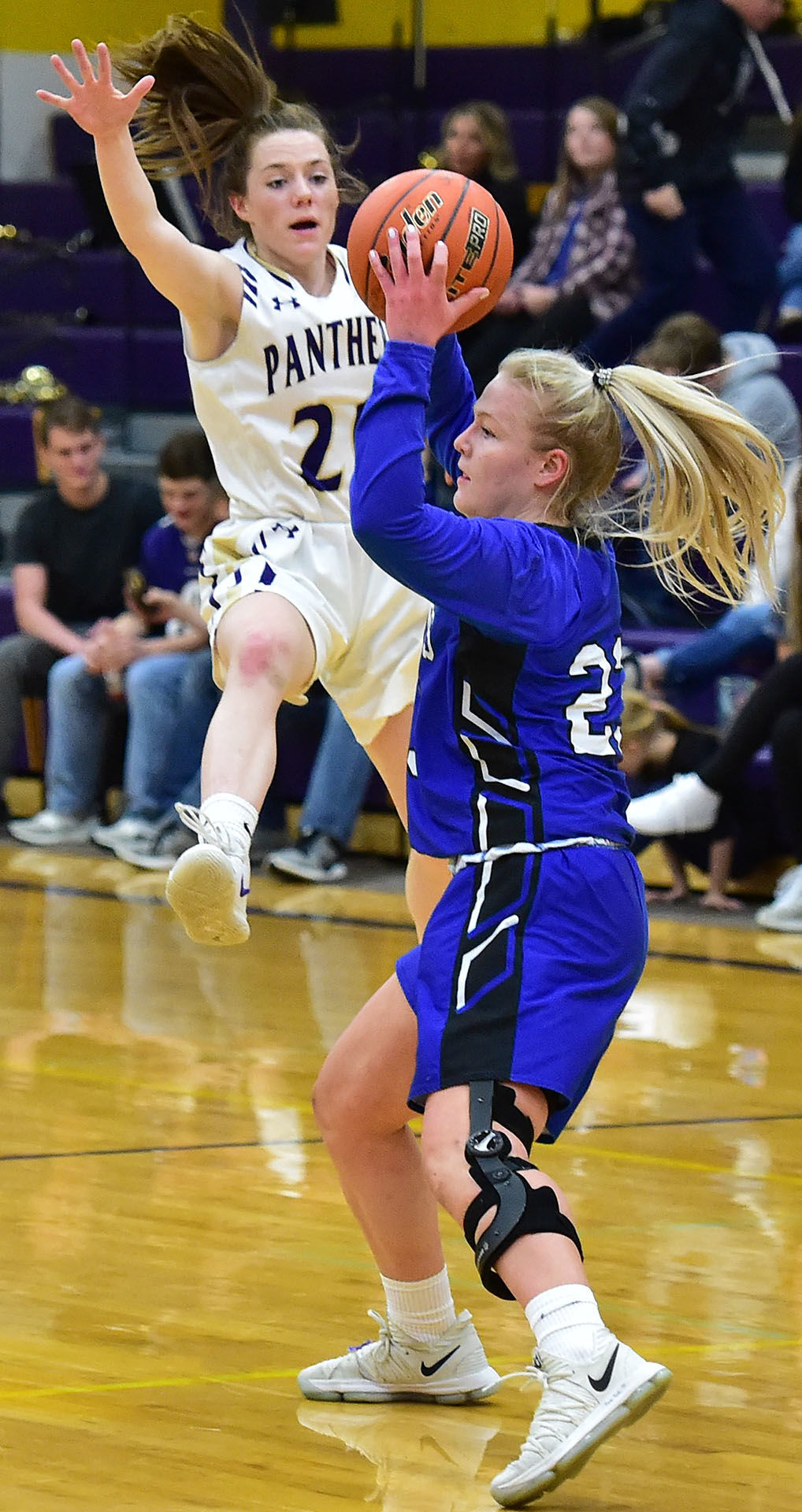 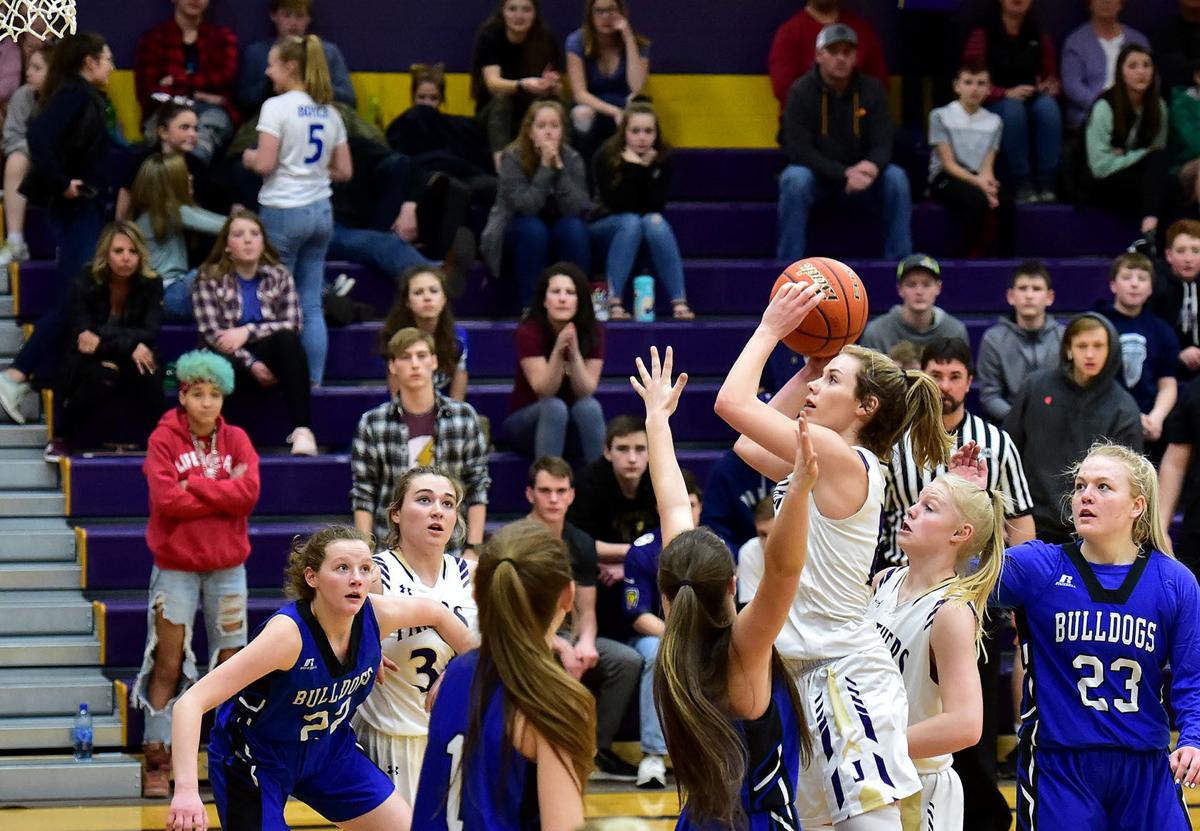 Rachel Van Blaricom rises above to get a good shot off against Broadwater. 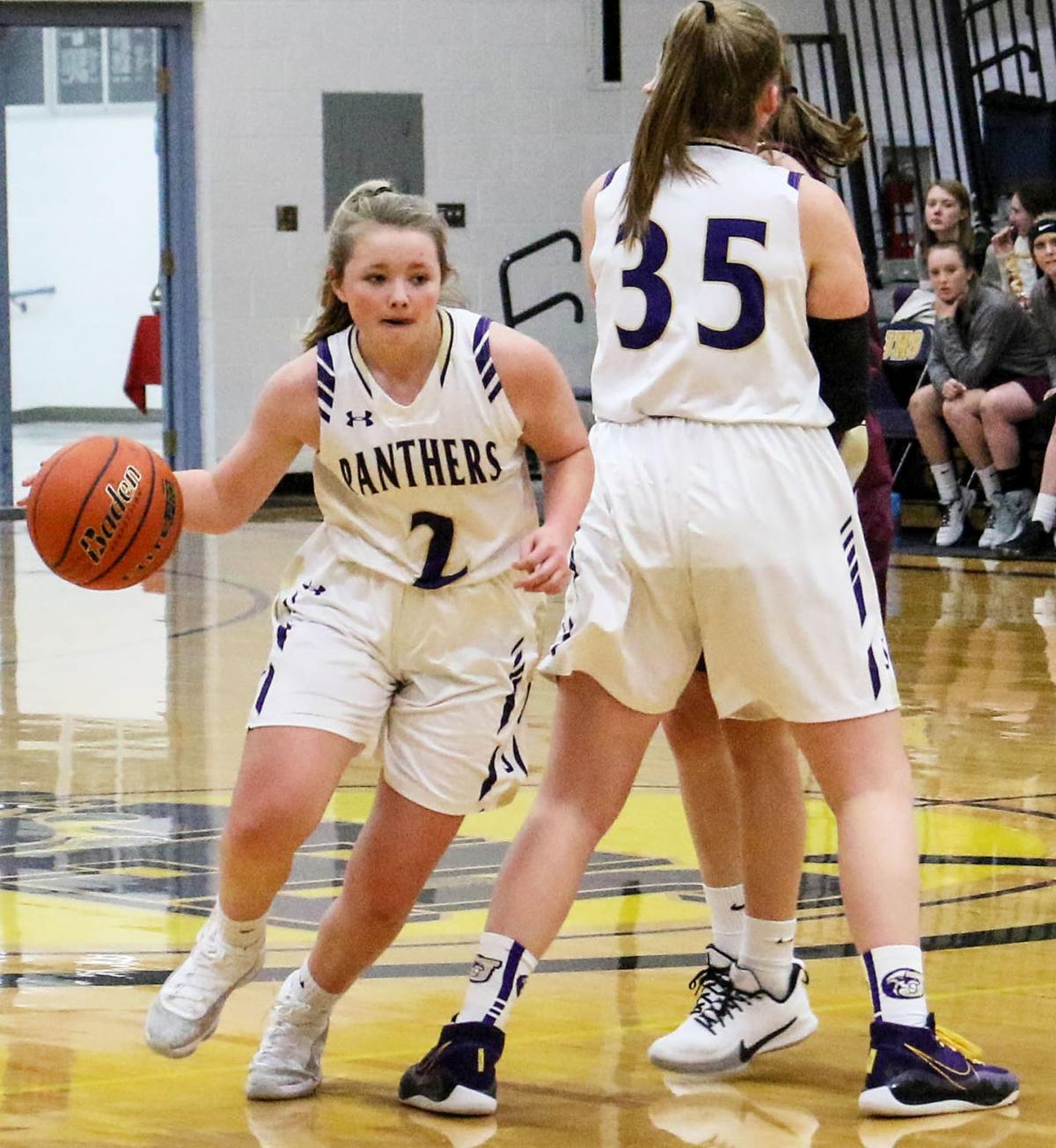 Laurynn Armstong drives around the screen set by Olivia Lyon against Choteau. 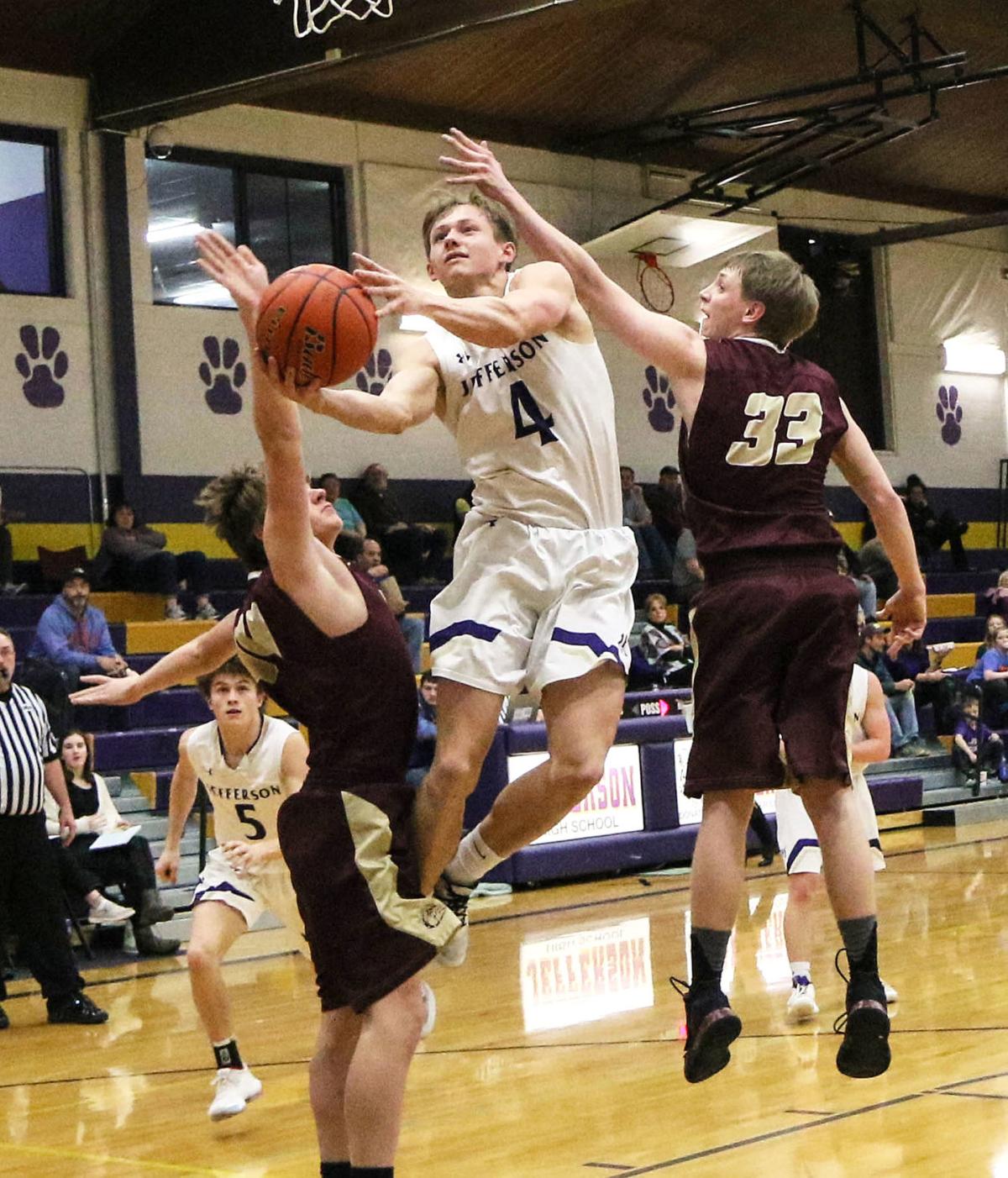 Avery Stiles goes for 2 points between the Choteau defense. 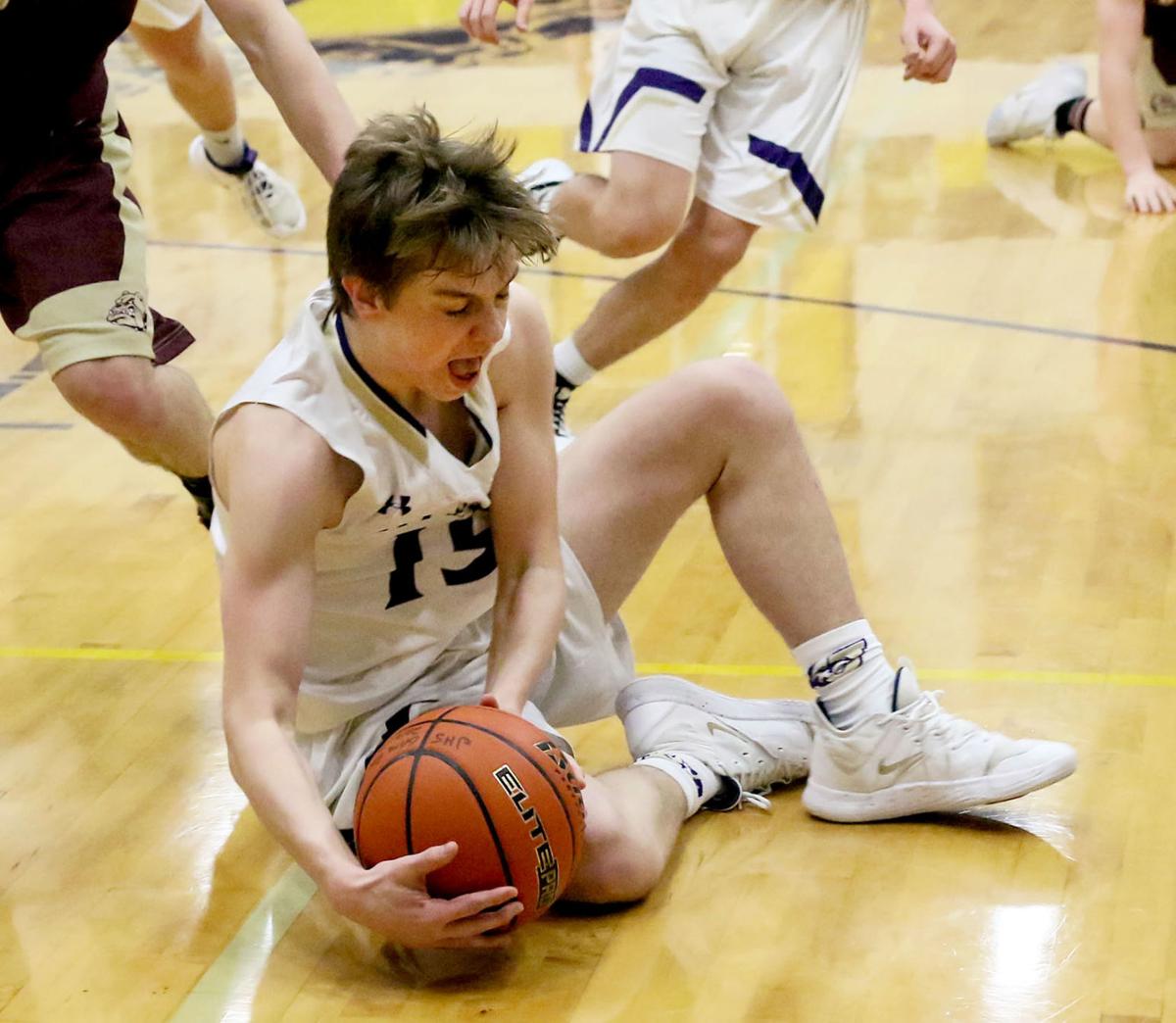 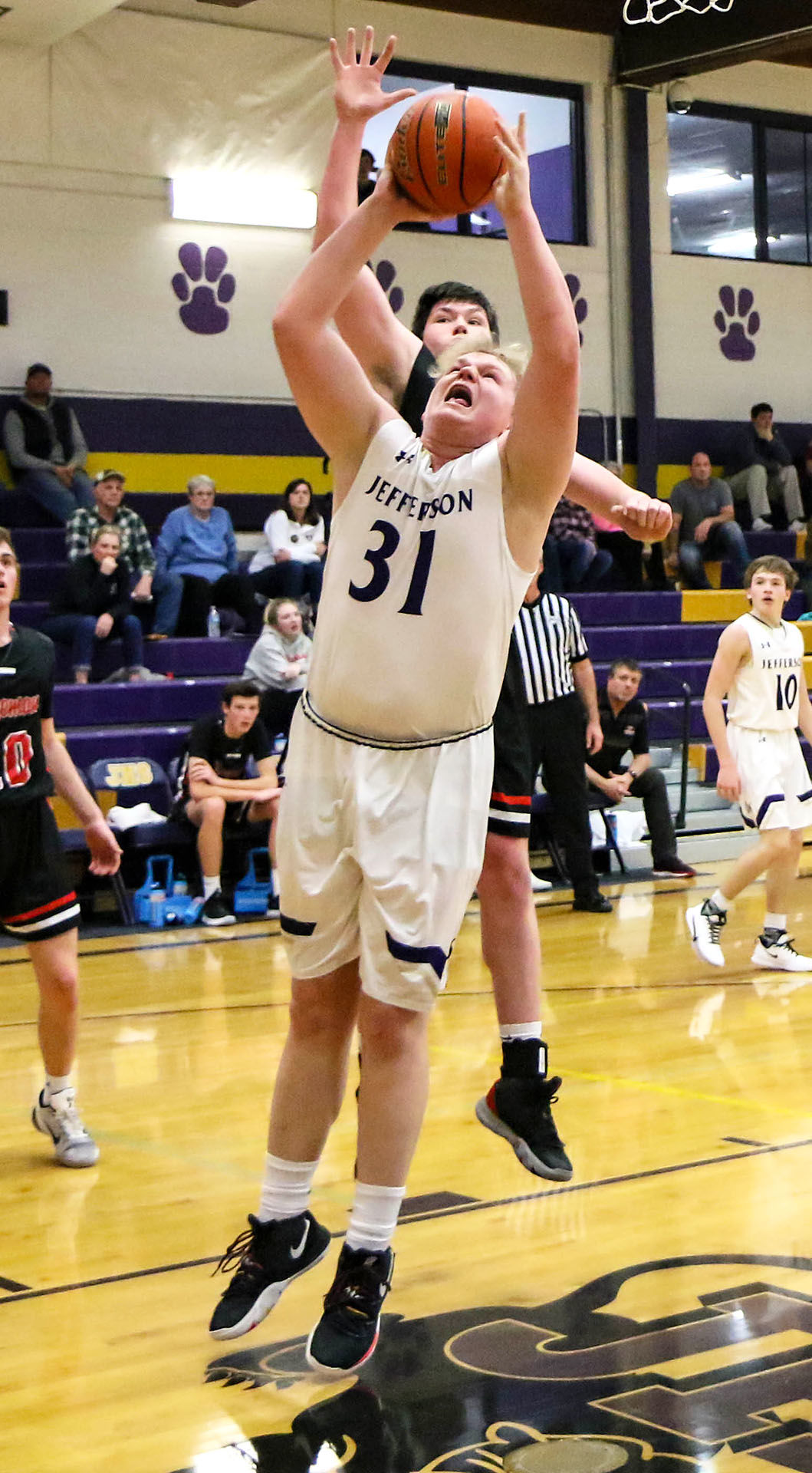 Derek Nygaard shoots for 2 against Bozeman.

The Lady Panther bench cheers their teammates during their triple-overtime win against Broadwater.

Morgan Walters, right, and Allie Supalla cheer the Lady Panthers in their game against Broadwater.

Laurynn Armstrong, right, slides and nearly collides with the stairs in an effort to save a loose ball during the Panther girls’ triple-overtime, home-court 62-55 win against Broadwater Saturday.

Rachel Van Blaricom rises above to get a good shot off against Broadwater.

Laurynn Armstong drives around the screen set by Olivia Lyon against Choteau.

Avery Stiles goes for 2 points between the Choteau defense.

Derek Nygaard shoots for 2 against Bozeman.

Triple overtime. The words alone sound exciting: Two teams who both refuse to lose, going at it until one blinks.

So it was on Saturday afternoon when the Jefferson High girls’ basketball squad took on Broadwater in front of a nearly full house of cheering fans from both schools. This was the regular season finale – and a chance for the Panthers to move up in the standings in advance of the District tournament.

The Panthers took an 11-5 first-quarter lead. But the Bulldogs fought back to make it 19-18 at the half, then started the third with a 6-0 run to take their first lead, 24-19. Olivia Lyon put in a two-pointer to stop the Panther’s dry run, but Townsend kept a 31-27 edge at the end of three.

The final period got exciting. A two by Rachel Van Blaricom gave the Panthers back the lead, Grace Jones made it 35-33 and Mykala Edmisten made a pair of free throws make it 37-36. Finally, Emma Grange sank a free throw to knot the score at 39 and send the game into overtime.

Five points in a row by Laurynn Armstrong gave the Panthers a 45-42 lead with 22 seconds left in the first OT – but then a long Bulldog three-pointer tied the game at 45. On to the second overtime. In that one, Jefferson were up 51-49 with 57 seconds left, but once again the Bulldogs managed to tie. On to the third.

By this time both sides of the bleachers had fans on their feet and encouraging their teams. I don’t think I have ever seen that much enthusiasm and noise at a basketball game.

Van Blaricom started the third OT with a two, then Armstrong was fouled on a shot and made one free throw. Ashton Oxarart weaved around the Bulldog defense and scored to give the panthers a 56-51 lead with three minutes left, and another free throw by Armstrong made it 58-53. Panther fans were feeling a win, but it wasn’t nailed down. Armstrong made it 60-55, then Van Blaricom iced a pair of free throws to finally ensure the 62-55 win.

What fun! Van Blaricom led the scoring with 16, while Grange contributed 13 and Armstrong 11.

That was the Panthers’ third win of the week. In a rare Monday night contest, Jefferson made up its game with Choteau. The Lady Panthers played to a first quarter tie of 13, then turned it on in the second with an 8-2 run. A three by Armstrong made it 21-15, and a nice assist from Van Blaricom to Grange helped the Panthers to a 29-19 halftime lead. It was 41-29 going into the final quarter, then back to back three pointers by Dakota Edmisten and Armstrong sealed the deal. Final: 54-37.

And on Thursday, Jefferson took a team from Bozeman High School made up of JV, Sophomore and C players.  The panthers surged to an early 9-2 lead, then Grange knocked down a three and Armstrong added a pair of free throws to make it 16-4 at the end of one. Bozeman picked up ground in the second closing to 23-14. But Mykala Edmisten started the third with a three and the panthers widened their lead to 32-17. The Hawks pulled to within 38-33 with two minutes left. But the Panthers closed out the game with a 5-0 run to take the win 43-33. Grange led the scoring with 11, while Oxarart added 9.

The Panther boys started slowly in their Choteau match-up. Choteau scored the first five points, and three minutes expired before Jaxson Yanzick connected on a three. With three minutes left in the first, it was 13-3, Choteau.

Then, finally, the Jefferson shots started falling. Buckets by Trent McMaster, Tyler Harrington, Derek Nygaard, Avery Stiles and Joey Visser knotted the score at 13 at the end of one, and the run continued into the second as the Panthers cruised to a 22-13 lead just two minutes in.  A three by Josiah Williams made it 34-21 lead at the half.

Stiles started the third with a two and followed with a three, and Harrington added a two to make it 41-21. The Panthers held a 55-37 lead at the end of three. The subs came on with two minutes left in the game, and the Panthers took a 73-47 win. Yanzick and Harrington led with 14 each while Stiles notched 13.

Against Bozeman, the Panthers went on an early tear, paced by three-pointers from Yanzick , Stiles and McMaster, to take a 15-4 lead at the end of one. The Hawks came back with a run to pull to 30-21 at the half and outscored the panthers 15-7 in the third to make it close, 37-36, heading into the 4th quarter.

In the final period, the Hawks increased their lead to 42-37 before the Panthers got back in the flow. A long pass from Stiles to Harrington for a lay-up started an 8-0 run that put Jefferson up 45-42. Then, free throws took over: The Panthers hit 9 of 15 in the quarter, including five in the final 28 seconds to cap the 54-48 win. McMaster made 6 of 7 free throws, a three and six two-pointers to lead the scoring with 21 points.

The Panthers’ regular-season finale against Broadwater nearly equaled the girls’ for excitement.  Yanzick started the game with a three-pointer and hit two more long-range bombs in the first, and a long assist from Harrington to Williams gave Jefferson a 15-12 lead after one. The teams stayed close in the second, with the Bulldogs narrowing the gap to 28-27 at the half.

Townsend went on an 8-0 tear early in the third, but the Panthers countered with an 8-2 run to lead by 39-37 going into the final period. There, the Bulldogs took a 44-40 lead before three-pointers by Yanzick and Stiles and a two followed by a three by McMaster put the Panthers up, 48-46, with 1:41 left. But Townsend was able to hit the last four points to escape with a 50-48 win. Yanzick topped the scoring 14, and Stiles and Williams had 11 each.

The loss did not change the final District standings, with the Panthers taking third and the Bulldogs fourth. The District 5B tournament kicks off on Thursday at the Belgrade Special Events Center; tickets are available at JHS.