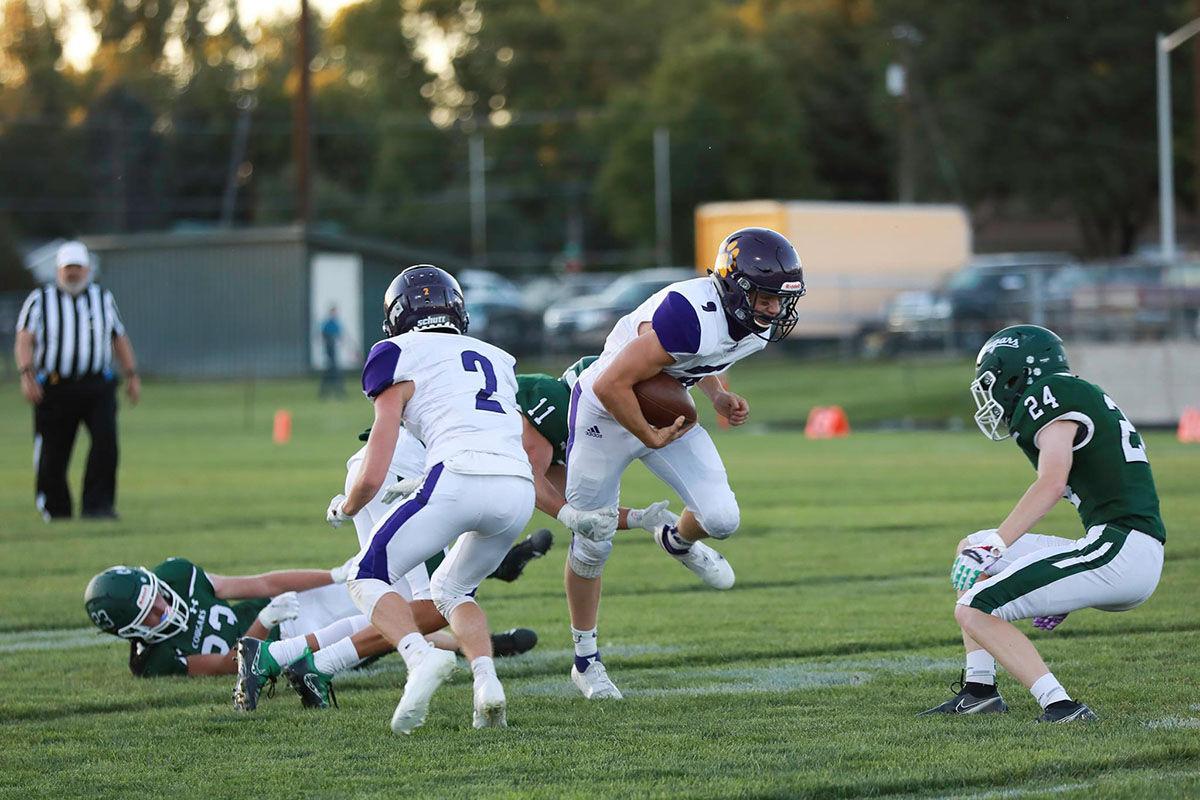 The Panthers’ #9 Braden Morris works his way through the Cougar defense as #2 Tyler Harrington assists.  The Panthers defeated Columbus on the Cougar’s home turf, 20-18. (Photo by Dawn Smartnick)

The Panthers’ #9 Braden Morris works his way through the Cougar defense as #2 Tyler Harrington assists.  The Panthers defeated Columbus on the Cougar’s home turf, 20-18. (Photo by Dawn Smartnick)

The cross country teams got in another meet. This time they were able to run the course at the Three Forks golf course on a very nice day for being outside in beautiful Montana. Next up will be a long trip to Red Lodge on Saturday, Sept. 19. This will be a first for the Panthers and will again put them on a course with views of the mountains. Races start at 10:30 a.m.

The JHS Panther football team traveled to Columbus on Friday night to take on the Cougars. This is a conference counter and it was thought by some that the Panthers would be in for a really tough time as Columbus had defeated Red Lodge the week before while putting 62 points on the score clock. It looked bleak at the start of the game, the Cougars took the opening kickoff, dodged around Panther defenders down to deep Panther territory. Seconds later they put the first points on the scoreboard, taking a 6-0 lead with 11:37 on the clock, but the PAT was not good. The Panthers started on their own 33, Riley Stock ran for 7 yards and the Panthers moved down to the Columbus 41 on a pass from Braden Morris to Tom Meyer. Then on 4th and 2, the pass went in and out of the Panthers’ grip and Columbus took over. A deep pass went to the Panthers 9, and on the next play, Columbus tacked on another six points, but a pass for two was no good and their lead was 12-0 with 5:27 left in the first.

The Panthers could have laid down and given up, but instead they made every Panther fan who had made the 190 mile trip and those watching on their computers very proud. Playing with determination and grit, the Panthers combined a running and passing game to keep the Cougars guessing.

The Panthers put their first points on the board with Stock rushing TD 46 seconds into the second quarter, a pass for two went just over the hands of the receiver and it was a new game, 6-12. A nice long kickoff by Caleb Smartnick gave the Panthers some field to work with and the defense took advantage, Columbus was not able to get much of anything going and had to put the ball back into the hands of the Panthers.

Then came the bomb that took the wind out of the Cougars and gave the Panthers and their fans plenty to cheer about. A pass from Morris to Jace Oxarart went 84 yards for a Panther touchdown, PAT good by Smartnick and the Panthers took a 13-12 lead with 8:15 left in the half.

The Cougars answered with a touchdown three minutes later, PAT no good again, for a 18-13 lead with 5:29 left in the half. The Panthers moved down the field and with two passes from Morris to Joey Visser, who were on the Cougar 20, but the drive ended when the Cougars intercepted a pass.

The second half was defense at its best for the Panthers.

The Cougars were knocking at the door, and on 4th and goal, Joey Visser knocked down a pass that turned the ball over to thePanthers. Visser intercepted a pass shortly after to give the ball to the Panthers and they took advantage. Stock broke tackles on the way to the 10 yard line, and shortly after a keeper by Morris, gave the Panthers the lead, and PAT by Smartnick made it 20-18 with 1:01 left in the third. The defense for both teams clamped down in the fourth and the Panthers held on for the conference win 20-18.

Stock had a great night rushing for 133 yards; the 84 yard pass reception and TD  by Oxarart was huge; Visser and Jake Genger each hauled down interceptions; and Morris had a great night passing for 197 yards.

The JV game that was scheduled for Monday VS Columbus in Boulder has been rescheduled. The Panthers first home game of the season is this Friday, Sept. 18 against Sweet Grass County, with a game time of 7 p.m. This is also homecoming week.

At Townsend, the first set saw the Panthers trailing most of the first set, down 15-21, but the Panthers then showed their true grit. An ace by Rachel Van Blaricom made it 20-22, but down again at 22-24, it looked bleak, but the determined Panthers out score the Bulldogs 4-1 to pull out the win.

Set two saw the teams stay close. Dakota Edmisten executed a kill that rolled along the top of the net then fell for the point, followed by an outstanding dig by Grace Alexander, which gave the Panthers a 4-1 lead. Abbie Youde came up with a big block to keep the Panthers in the lead, and the Panthers won the set with a kill by Edmisten, finishing with 25-22. The Panthers started the third with a 6-2 lead and held it the entire set. Hope Dobyns put down a kill to make it 22-19, Edmisten powered over a kill to put the Panthers up 24-21 and Sam Zody served an ace to give the Panthers a 25-21 win.

The Panthers rolled to a 25-13 win in the first two sets in Big Timber, then stumbled a little in the third and lost, 20-25. They regrouped in the fourth set to take the win 25-19.

The Panthers were at Whitehall on Tuesday, Sept. 15 and on Thursday, Sept. 7, they will host Manhattan for homecoming.