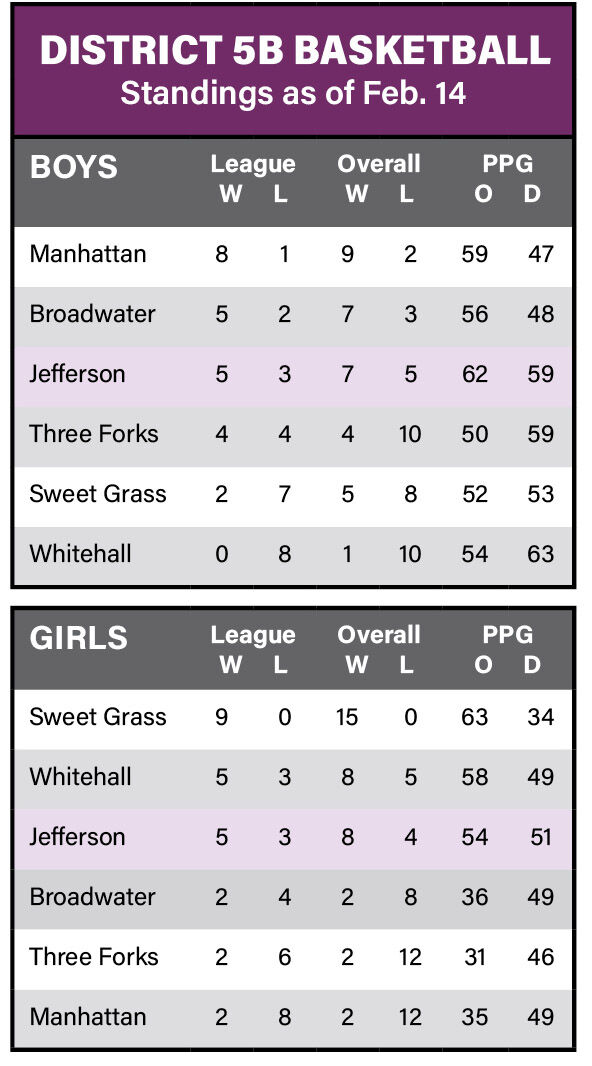 Whew. This was the sort of week that gives sports columnists heart palpitations. Five basketball games in five days – and four of them nailbiters. It made for great high school sports – and Jefferson High’s Panthers mostly came out on top.

Jefferson’s packed week began with rare Monday games on February 8, a by-product of the season’s late start due to COVID-19. The Panthers traveled to Manhattan for important conference match-ups, and the boys’ varsity played first.

League-leading Manhattan jumped to an early lead, 8-4, but the Panthers came back and tied the score at 10 on a basket by Joey Visser. Jake Genger’s free throw left Jefferson down by just two points at the end of the first period.

The offenses took a few minutes to heat up in the second – and Manhattan’s got hotter. Even with McMaster’s pair of three pointers and a two, the Tigers went up 31-21 at the horn. And the second half was all Manhattan, as the Tigers outscored Jefferson 33 to 17 to take a 64-38 win. McMaster led the Panthers with 18, while Braden Morris added 5.

The ladies’ game started slowly. Cia Stuber swished a three for the Panthers, and Dakota Edmisten scored on an assist by Rachel Van Blaricom, who hit a two shortly after. At the end of one, the score was knotted at seven.

The teams stayed close in the second, with neither able to open more than a four-point lead. MacKenzie Layng knocked down a three and Van Blaricom followed with a two to put the Panthers up 19-17 at the half.

Jefferson went on a run to open the third, with Edmisten, Stuber, Van Blaricom and Grace Alexander putting in points. Stuber added a pair of threes to give the Panthers a 34-25 lead at the end of three. But the last three minutes of the game got interesting: Manhattan pulled to within two points with five seconds left before Layng sank two free throws to seal the 46-42 win. Van Blaricom led her squad with 13; Stuber added 12, Layng 7, and Edmisten 6.

Two days later, the Panther boys found themselves playing Manhattan again, making up a rescheduled game. This time, they came out with a lot more energy. Morris started the scoring and then hit a three shortly after, McMaster hit back-to-back three-pointers, and Genger ended the first with a basket to give Jefferson a 15-11 lead.

A three by Tyler Harrington and Wade Rykal’s two put the Panthers up by 10, and they held a 29-20 margin at the half. But Jefferson cooled off in the third, and Manhattan chipped away at the lead, pulling to 39-37 going into the final period.

The fourth quarter was a wild one. The Panthers were up 46-41 with four minutes left only to see the Tigers come back to take a 50-48 lead at 1:29. Visser hit a pair of free throws to tie it, then another with 28 seconds left for a one-point lead. The Panther defense held and Visser went back to the line with nine seconds left. With nerves of steel he swished them both and the Panthers held on for a 53-52 win.

It was the first conference loss for Manhattan. McMaster led the Panthers again with 18, while Visser scored 9, Morris and Harrington 7 each, Rykal 5, Genger 4, and Zach Zody 3.

Jefferson’s hoopsters were back at it on Friday as the schedule shifted again. Townsend’s teams had to go into quarantine, so those games were rescheduled to this coming Saturday. In their place, Whitehall came into town – and two more exciting games would keep both sides of the bleachers on edge.

Visser started the boys’ game with a three, Whitehall answered with a three and the race was on. With county bragging rights at stake, this would prove to be one of the best games to watch this year.

Harrington’s three gave the Panthers a one-point edge, but the Trojans led 17-14 at the end of one. In the second, four three-pointers by Visser kept the Panthers close, and a basket by Rykal tied the score at 35 at the half.

Whitehall, led by Brandon Wagner, outscored the Panthers 19-13 in the third to go up 54-48 with eight minutes to play, and it was 57-50 before Jefferson came back to life. Then, Morris, Harrington and Genger scored to cut the deficit to one with 2:58 left. Whitehall was still up, 63-62, with seconds left.

But with five seconds on the clock, McMaster took the ball end to end and swished a two from inside the free throw line to put the Panthers up. A last-ditch heave by the Trojans bounced off the top of the backboard and the Panthers took the 64-63 win. Whitehall’s Wagner led all scorers with 35 points, but Visser was just behind with 32, including seven three-pointers. McMaster added 16, Harrington 10, Rykal 4, and Genger 2.

The ladies’ game would prove to be another crowd pleaser. Whitehall scored first, but then Edmisten turned it on with seven of the Panthers’ first-quarter points. Van Blaricom added four and Stuber swished a three to give Jefferson a 14-13 lead.

Stuber caught fire in the second, knocking down a pair of three-pointers and three free throws to give the Panthers a 37-33 halftime lead. Jefferson cooled off in the third, managing just six points while Jada Clarkson’s seven led the Trojans to a 48-42 lead going into the last eight minutes of play.

The Panthers came back in the fourth led by Edmisten’s 13 points and Van Blaricom’s nine. Grace Alexander hit a giant three for a 59-53 lead, then Whitehall closed the gap to 65-63 with three seconds left. But Edmisten calmly hit two free throws to seal the deal. Final: 67-63, Panthers. Edmisten led the scoring with 28 points; Van Blaricom added 17, Stuber 15, Hailey Stiles 4, and Alexander 3.

Jefferson now enters the final week of the regular season. The ladies were scheduled to play Anaconda in Boulder on Tuesday, while the boys traveled to Anaconda the same day. Three Forks will be at Jefferson on Friday for senior night, and the teams will finish out the schedule on Saturday in Townsend. The District 5B playoffs will start on Tuesday, February 23;  watch the JHS website for brackets next week.