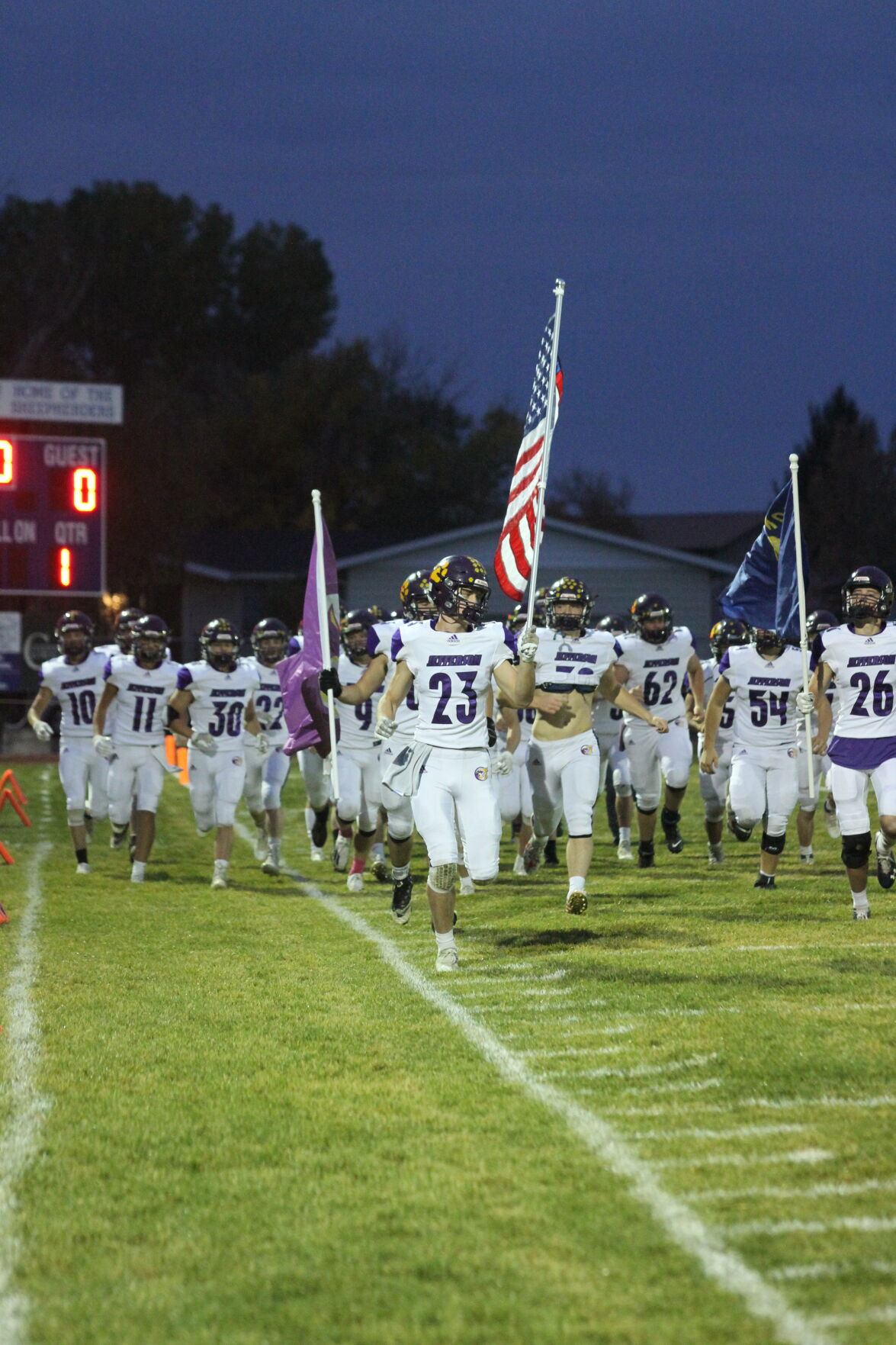 Jake Genger (23) leads the Panthers onto the field in Big Timber on Oct. 8. 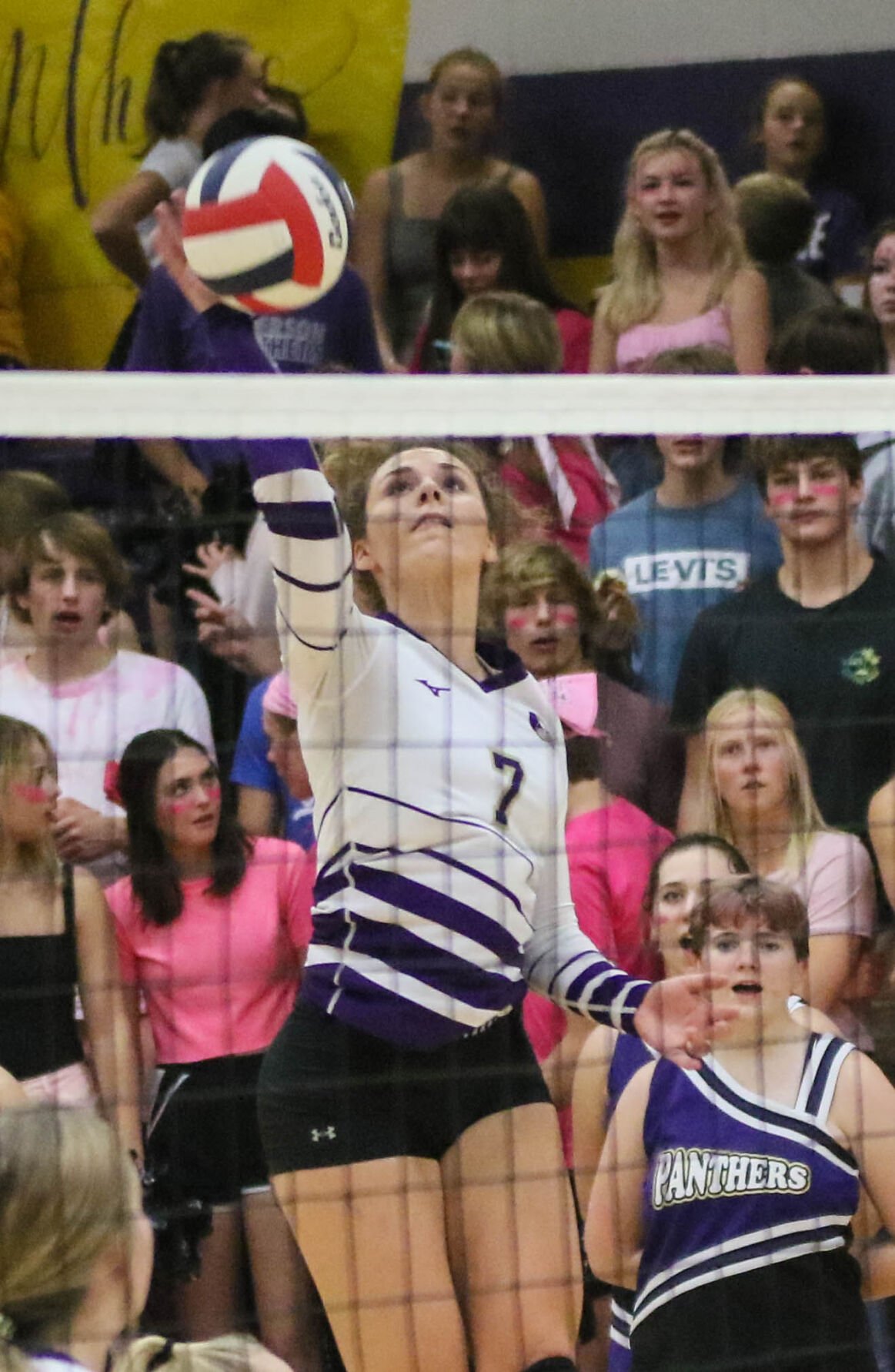 Rachel Van Blaricom tips the ball over the net, playing against Broadwater in Boulder on Oct. 5.

Jake Genger (23) leads the Panthers onto the field in Big Timber on Oct. 8.

Rachel Van Blaricom tips the ball over the net, playing against Broadwater in Boulder on Oct. 5.

It was payback time. Last month, Broadwater High handed Jefferson High its only volleyball loss of the season in a bruising four-set match. On Oct. 5, the Bulldogs visited Boulder—and this time, the result wasn’t close, as the Panthers came away with a sweep.

Dakota Edmisten launched the match with a kill, Sophie Livesay blocked for a point and the Panthers took charge. They went up 15-5 on a kill by Bailee Toney, and an ace by Sydney Mace and a kill by Rachel Van Blaricom made it 17-5. Edmisten was slamming the ball over for kills and then put over a sneak tap for a 25-10 first-set win.

Van Blaricom started the second with a kill, and a block by Edmisten followed by a hard kill put the Panthers up 4-0. They built their lead to 9-4 before the Bulldogs woke up, staying even until 17-12. Then, the Panthers rediscovered their groove; behind Edmisten’s nine kills in the set, they cruised to a 25-19 win.

Jefferson started the third set with an 11-4 run, but Broadwater picked at the lead and pulled to 16-14. But kills by Van Blaricom and Mace, and a block and two aces by Toney, sealed the deal; the Panthers finished the sweep, 25-16.

On Friday, Jefferson traveled to Sweet Grass County for its second conference match of the week—and came home with another three-set win. Edmisten paced the Panthers to a 6-0 lead in the first, an ace by Emma McCauley made it 19-9, and the first set ended with a 25-15 win.

The second set started tight, with the teams tied at 5 before kills by Van Blaricom, Livesay, Edmisten and Toney gave the Panthers some breathing room. Another McCauley ace made it 24-16 and the Panthers took the win 25-17. The third set was close all the way, with ties at 13 and 14. Gracie Leiva’s ace made it 16-14, but the Herders tied it again at 21 before the Panthers closed it out with a 5-1 run.

It’s great fun to watch these girls play. On Thursday, they’ll host Whitehall, with the JV squad starting at 5 p.m. and varsity to follow. On Friday and Saturday, the varsity squad travels to the Butte Central tournament with 26 teams—mostly Class A—competing. The Panthers will be at Butte Central all day Friday; depending on the results, they’ll play Saturday at either Central or the Butte Civic Center.

For the ladies, Renea Parker had a great time of 20:01, with Izzy Morris finishing at 26:02 and Austie May at 26:53. The squads will finish the regular season this Saturday at the Townsend meet, with the start at 10:30 a.m. depending on frost. Saturday, Oct. 23, is the state championship meet in Missoula.

The Panther football squad took a big step toward qualifying for the postseason with a 45-6 drubbing of Sweet Grass County in Big Timber on Friday. Jefferson is now 2-1 in the conference, trailing Broadwater—its last opponent of the regular season—and Columbus, which narrowly beat the Panthers last month. The top four teams make the playoffs.

In Big Timber, Jefferson wasted no time in getting points on the board. John Armstrong covered a squib kickoff by the Herders, and the Panthers were off: Braden Morris passed to Jake Genger for 8 yards, Dylan Root ran to the 34, Tyler Harrington moved it to the 23, and Morris took it to the 17. On 3rd and 5, Morris broke through to the 3 and then ran in untouched for a touchdown. Root’s extra-point kick was good, and it was 7-0 Panthers.

Then the defense took over. After Caleb Smartnick’s kickoff went into the end zone with no return, the Herders couldn’t move the ball and were forced to punt. Root made it through the line and blocked the punt, giving the Panthers the ball on the Big Timber 12. From there, Morris ran to the 5, and Root scooted in for a 14-0 lead.

On the Herders’ next possession, Joey Visser picked off a pass and returned it to the Sweet Grass 15. Jace Oxarart ran to the 7, but after a Panther false start, Morris was sacked. Root kicked a field goal to put the Panthers up 17-0 as the first quarter ended.

Jefferson picked right up in the second. Just 51 seconds into the quarter, Morris found Luke Oxarart, setting up another touchdown, and an extra point by Root. Now up 24-0, the Panthers weren’t letting up: Jace Oxarart scored from the 1 to make it 31-0 at the half.

Two minutes into the third quarter, a pass from Morris to Tom Meyer put the ball on the Herder 15. Another pass to Genger went to the 3, with three Herders needed to bring Genger down. Genger found the end zone on another pass from Morris, and it was 38-0.

From there, the clock was running—but the Panthers didn’t ease up. Wade Rykal’s sack and Harrington’s pass knockdown forced another punt. Zach Zody entered as quarterback—and found Meyer for a score, 45-0. Big Timber finally reached the end zone with 8:15 left on a 45-yard pass and two more passes. And that was it: 45-6. A nice win for the Panthers.

Jefferson has two regular season games remaining, both at home. Manhattan visits this Friday, and Broadwater will close things out Oct. 22.