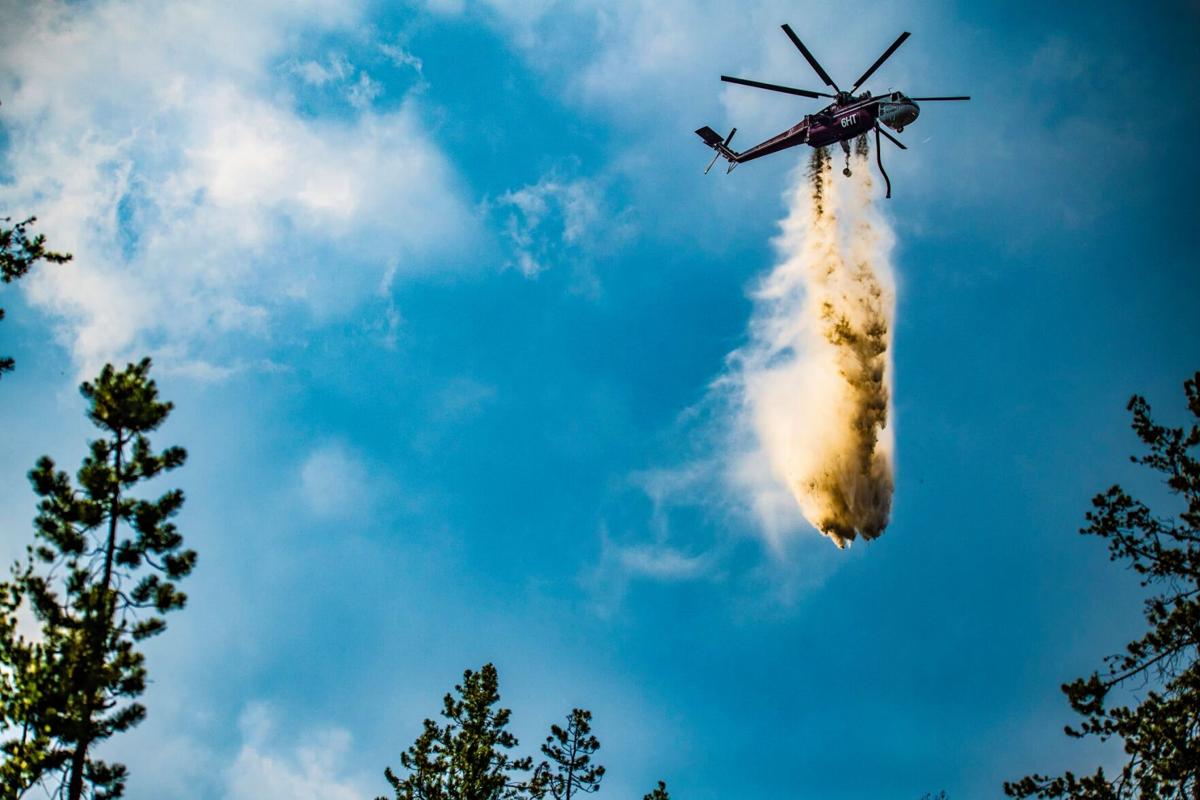 A skycrane helicopter drops water onto the Gatlin Gulch Fire southwest of Boulder on Sunday. 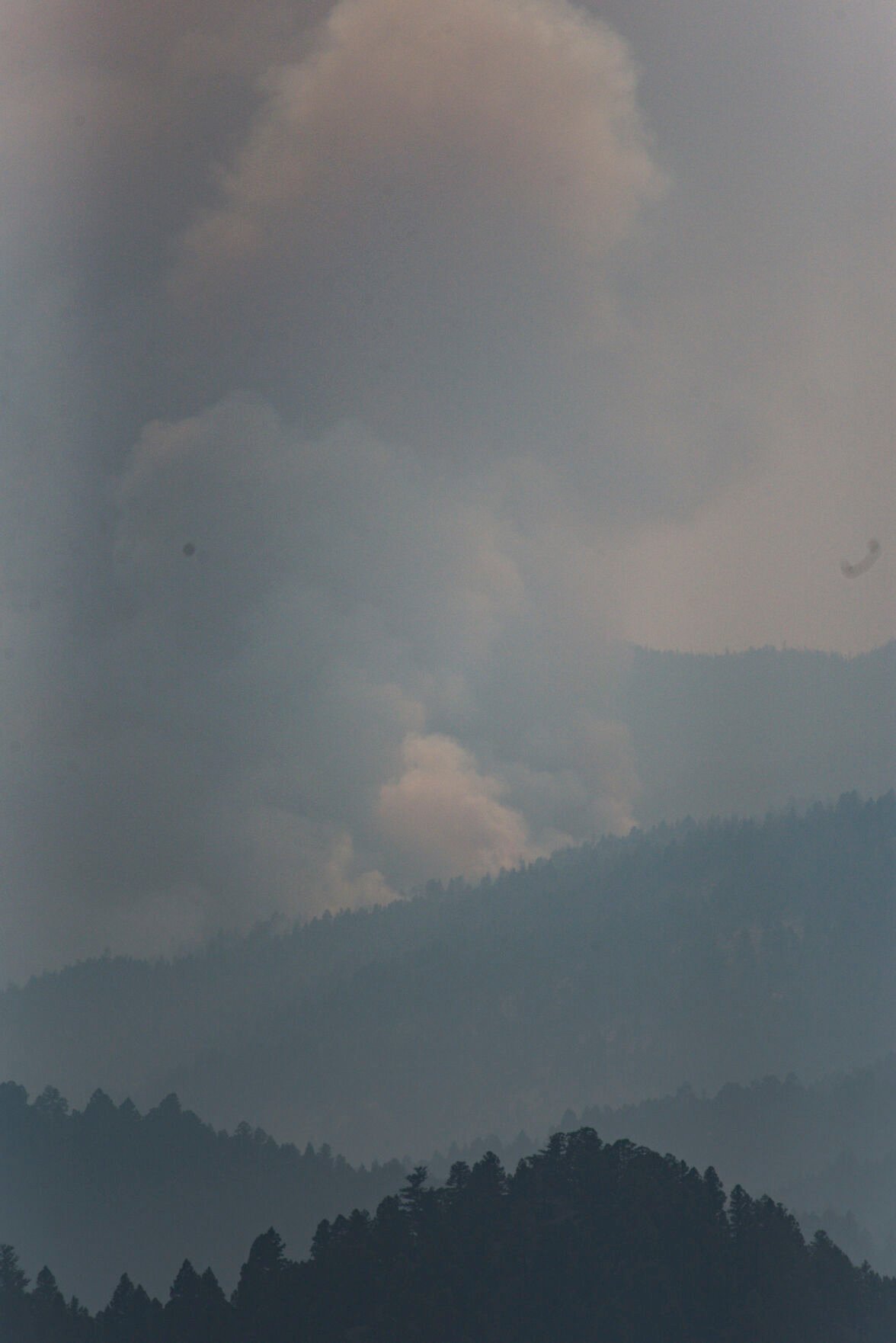 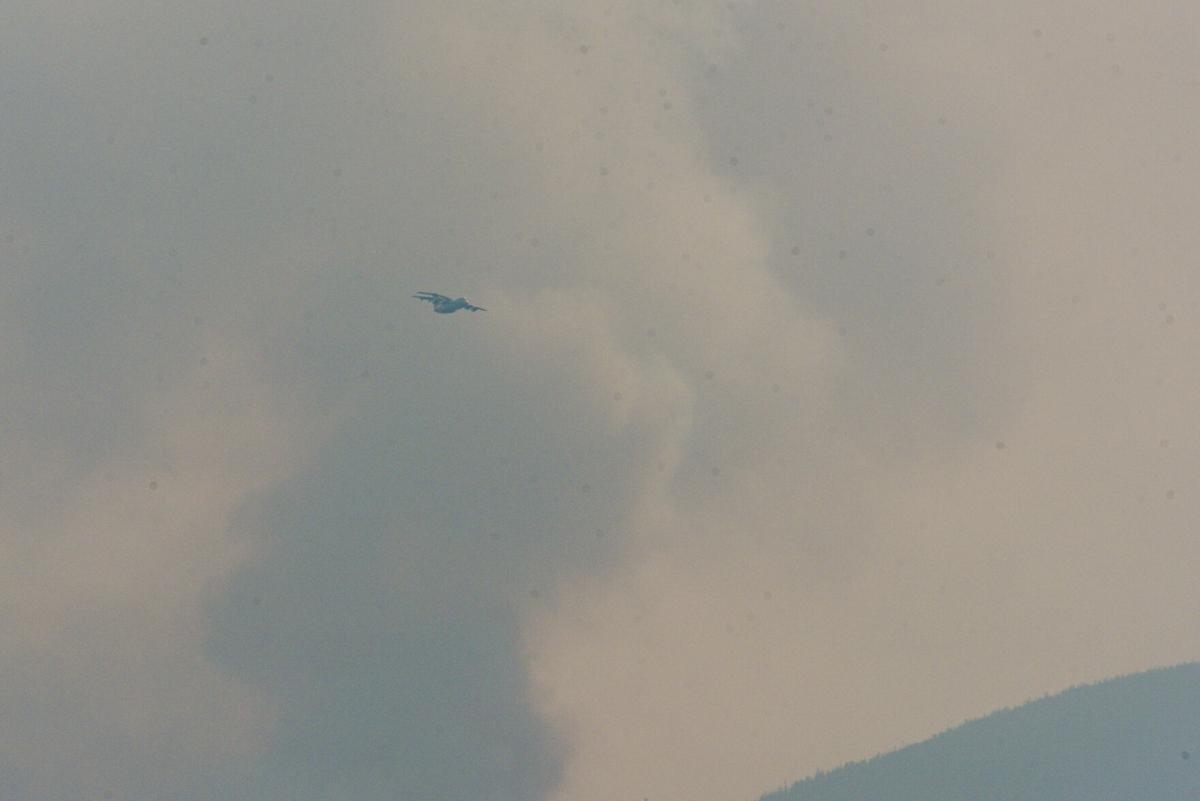 A skycrane helicopter drops water onto the Gatlin Gulch Fire southwest of Boulder on Sunday.

Multiple wildfires ignited and burned around Jefferson County in the past week, including the 60-acre Gatlin Gulch Fire southwest of Boulder that ignited on Friday and is being fought by a federal incident management team.

Brief but heavy rainfall on Monday slowed progress of the Gatlin Gulch Fire, which is about 5 miles southwest of Boulder along the Little Boulder River. Crews responded that afternoon and evening to new fires likely sparked by lightning from the storm system that brought the rain, and kept watch on a fire atop Haystack Mountain that started on Saturday.

At press time on Tuesday, ground crews and a helicopter were responding to a wildfire reported near Wickes at 12:55 p.m.

According to Beaverhead-Deerlodge National Forest Public Affairs Officer Catherine McRae, the area around the Gatlin Gulch Fire received about .02 inches of moisture by midday Monday. More rain fell in the afternoon and overnight.

"We did see some positive effects from even just that little bit," she said in an interview on Monday.

She said that crews continued to reinforce fire lines and assess structure protection in the area, and that aerial resources continued to fight the fire.

Bull Mountain Rural Volunteer Fire Department Chief Cory Kirsch, who is also a Jefferson County commissioner, said in a phone call Friday afternoon that local volunteer crews from Boulder, Basin and Jefferson City responded around 2:01 p.m. that day to the fire, which he said was about 1 mile off of Little Boulder Road to the north, between that road and North Fork Road.

He said that crews found a 3–5-acre fire with "torching and spotting."

The fire grew to 40 acres by Saturday and 60 acres on Sunday, based on perimeter estimates shared by the Jefferson County Sheriff's Office and U.S. Forest Service.

McRae said that a type-three incident team from outside the forest would take command of the fire today. The incoming team was briefed on Monday afternoon and shadowed the Beaverhead-Deerlodge team on Tuesday, she said.

"That means that our guys are available the be the initial attack response" to other emerging incidents in the region, she said.

And the team will likely stay busy. McRae said that as of 1:30 p.m. on Monday, seven new fire starts had been reported in the forest in the past 12 hours.

McRae thanked the Boulder community for its support as crews work the Gatlin Gulch Fire and other nearby incidents, noting that the Tribal Nations Response Team's Pima Agency crew was eager to return to Boulder after mandated rest beginning on Tuesday.

"I thought that said a lot about how the community of Boulder is receiving them," she said, adding that she has received messages from locals offering assistance to support firefighters.

Crews working the Gatlin Gulch Fire are based at the county fairground south of Boulder and enjoyed sharing the facility with a wedding on Saturday, she said, and firefighters "greatly appreciate the public support."

Crews responded on Monday to a wildfire reported north of Homestake Pass in southwest Jefferson County, about 4 miles north of Interstate 90, just west of Camp Caroline Road. The fire was reported at 12:34 p.m. and estimated at 0.5 acres, burning in heavy dead and downed timber, according to preliminary information from the Beaverhead-Deerlodge National Forest's Dillon dispatch center.

A Facebook post from the forest on Monday night said that the fire was about 0.5 acres and that "crews are responding."

McRae said that the Haystack Fire—reported on Saturday around the top of Haystack Mountain, east of Elk Park, between U.S. Interstate 15 and Whitetail Reservoir, according to an interactive map maintained by the state Department of Natural Resources and Conservation—was determined to be about .01 acres and atop a knob, and had "low spread potential."

According to radio traffic, crews from Bull Mountain Rural Volunteer Fire Department responded on Monday evening to a fire in a field at the Dawson Ranch on state Highway 69 southeast of Boulder. The fire was reportedly caused by a lightning strike in the field.

The Helena Interagency Dispatch Center received a report of a wildfire following a lightning strike on Strawberry Butte east of Clancy at 2:34 p.m. on Monday, according to radio traffic and dispatch records. The report was later listed as a false alarm. Radio traffic and dispatch records indicated that crews responded on Monday night to reports of smoke on the north end of Bull Mountain, spotted from Boulder, and near Muskrat Creek northeast of Boulder, spotted from I-15. Responding crews did not find any fires.

‘This is going to be a bad one:’ fire outlook grim

This year's fire season could be among the worst in years, due to a combination of weather and environmental factors including dry fuels, hot …