You are the owner of this article.
Edit Article Add New Article
You have permission to edit this article.
Edit
Home
COVID-19
News
Sports
Features
Surveying the Views
Multimedia
Obituaries
e-Edition
Classifieds
Legal Notices
1 of 7 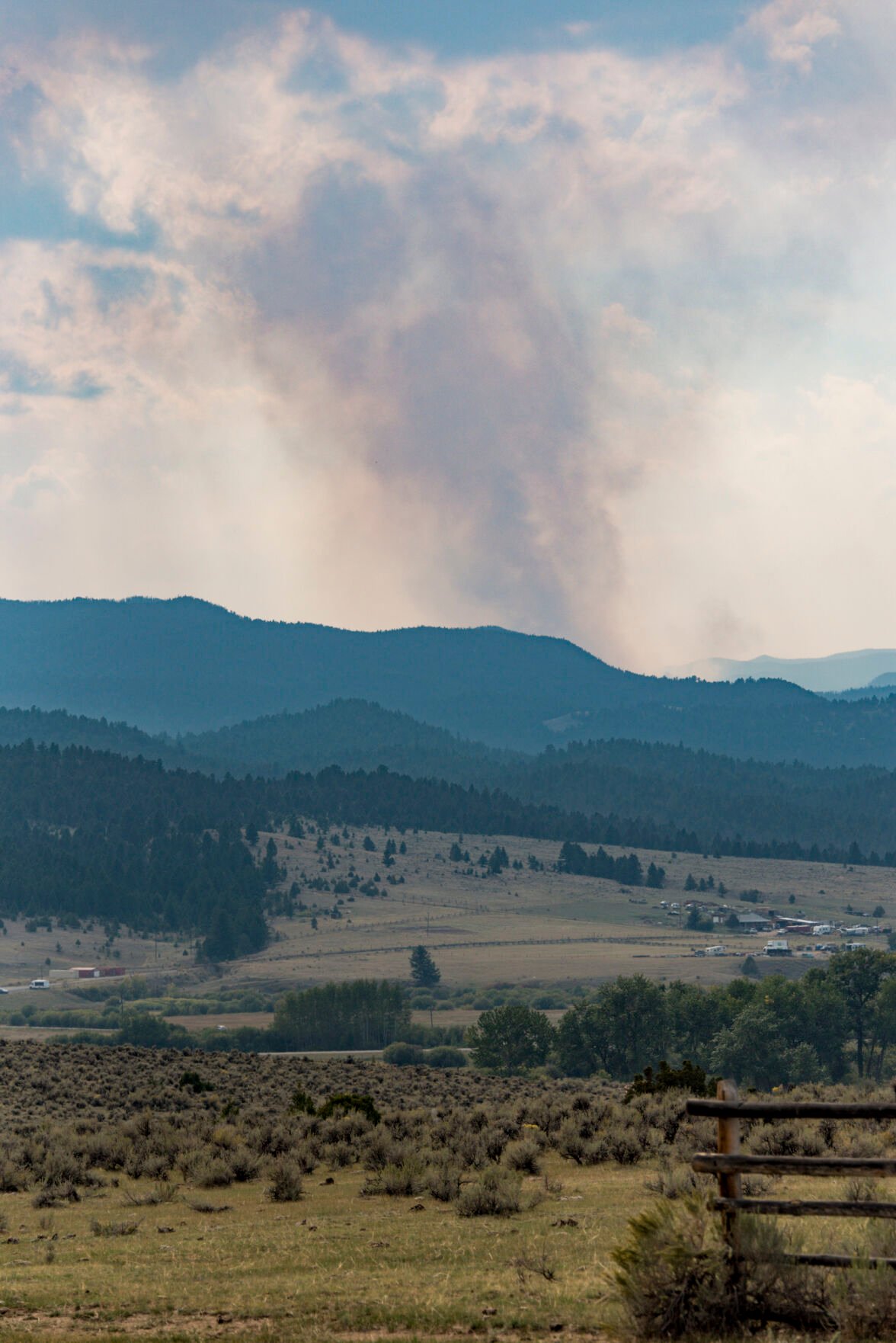 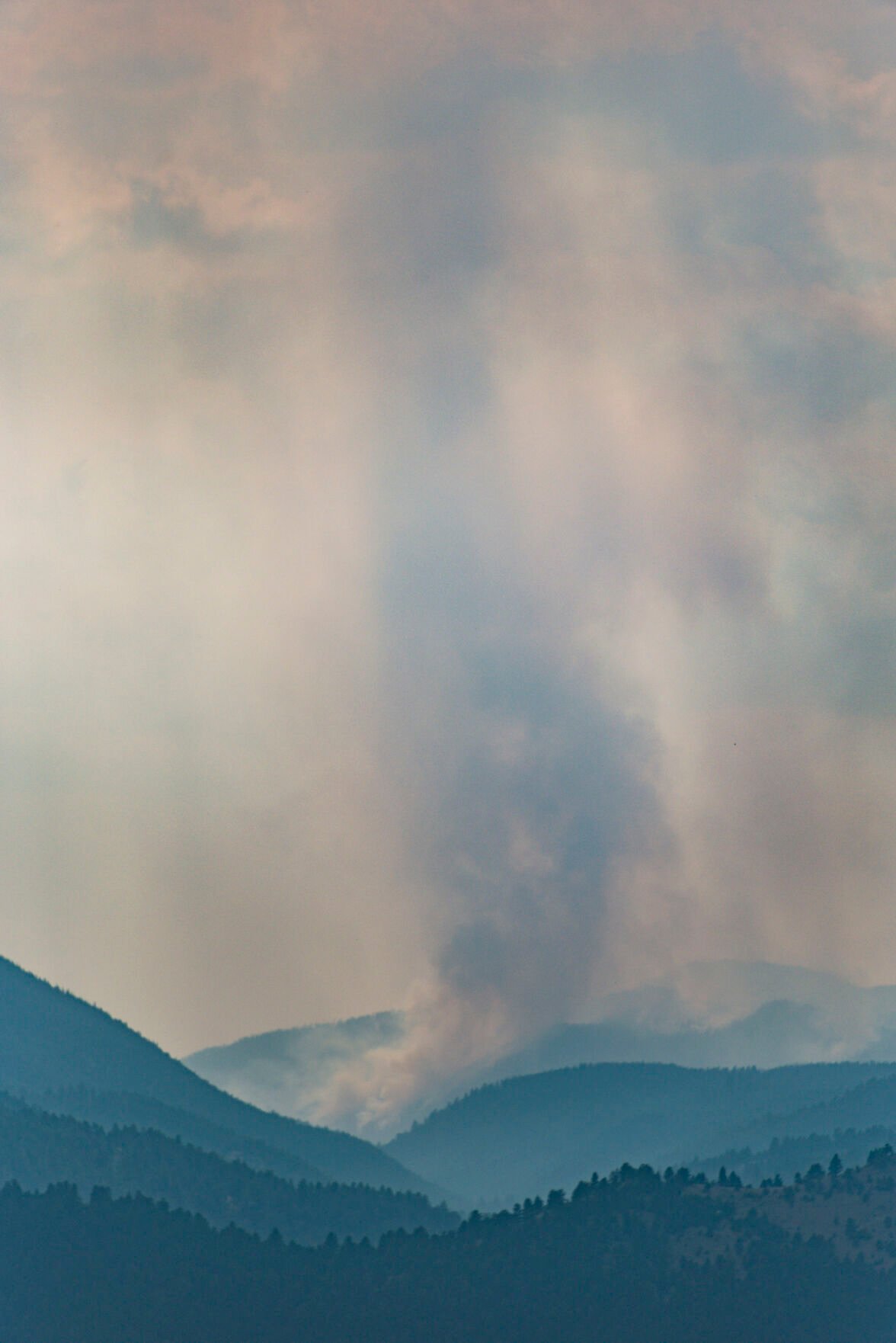 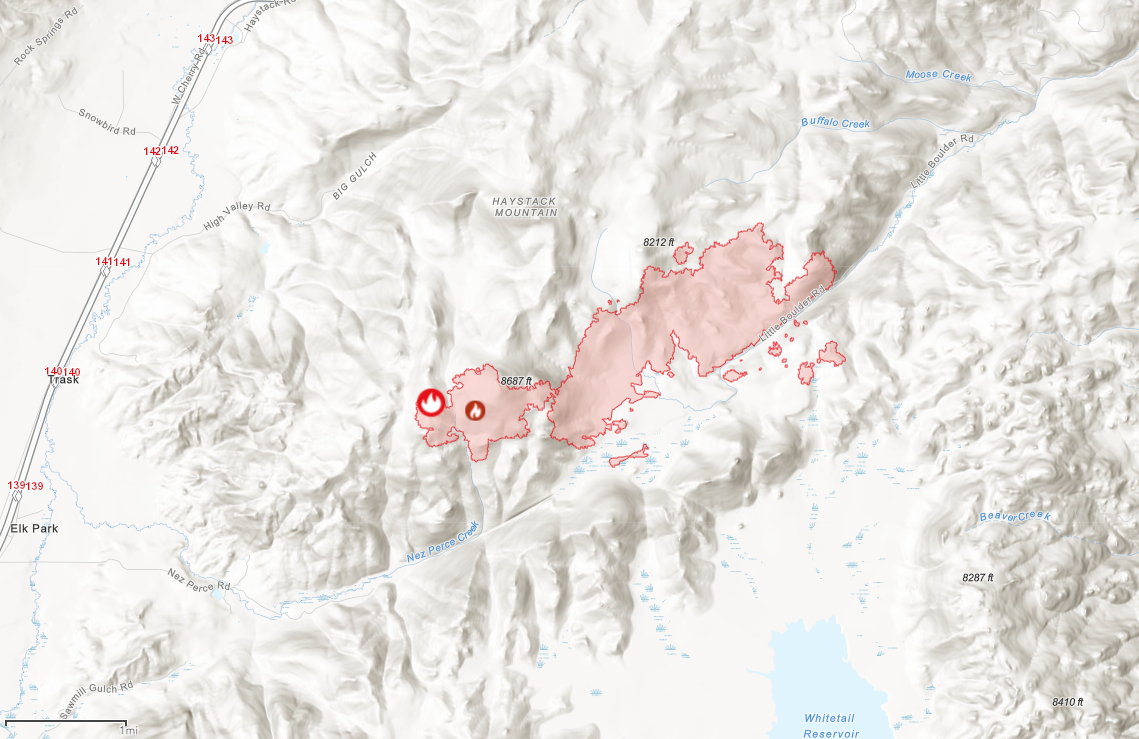 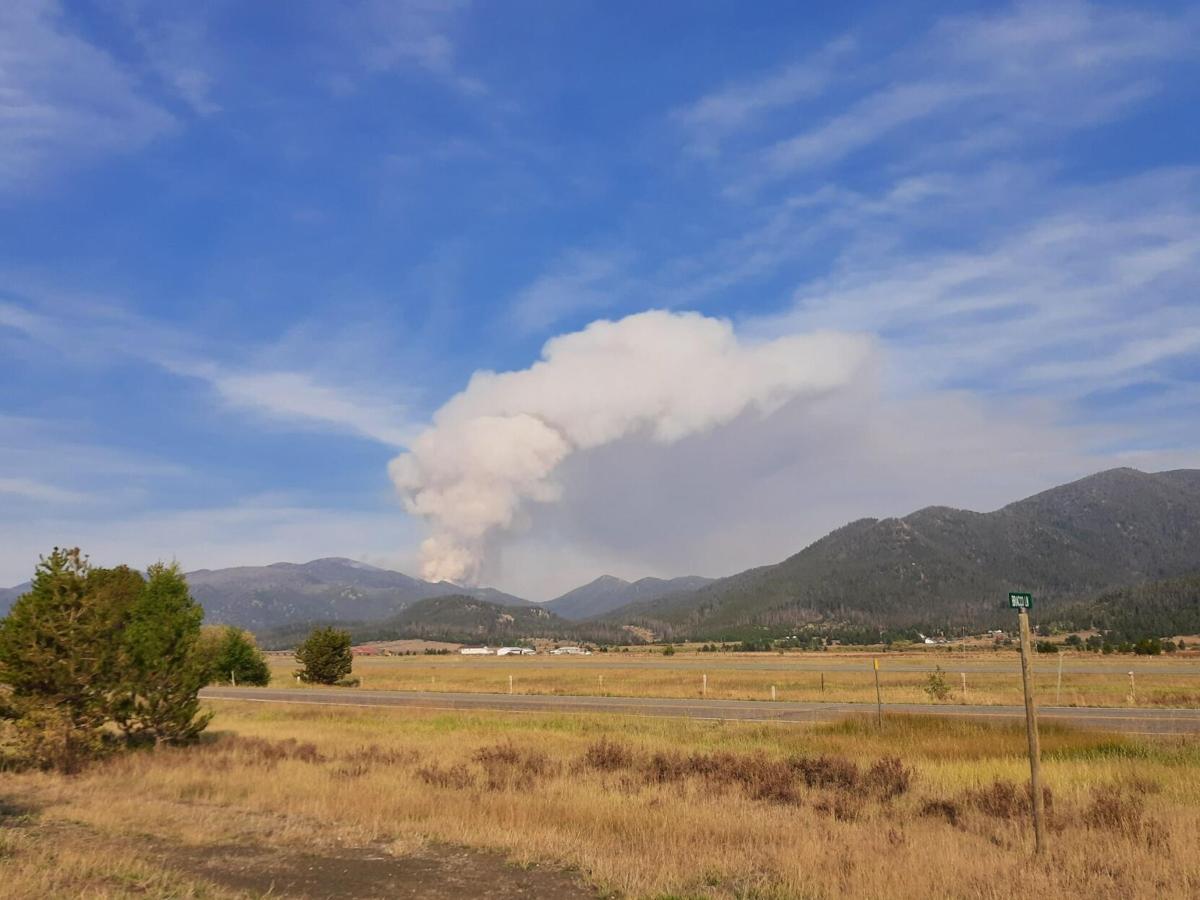 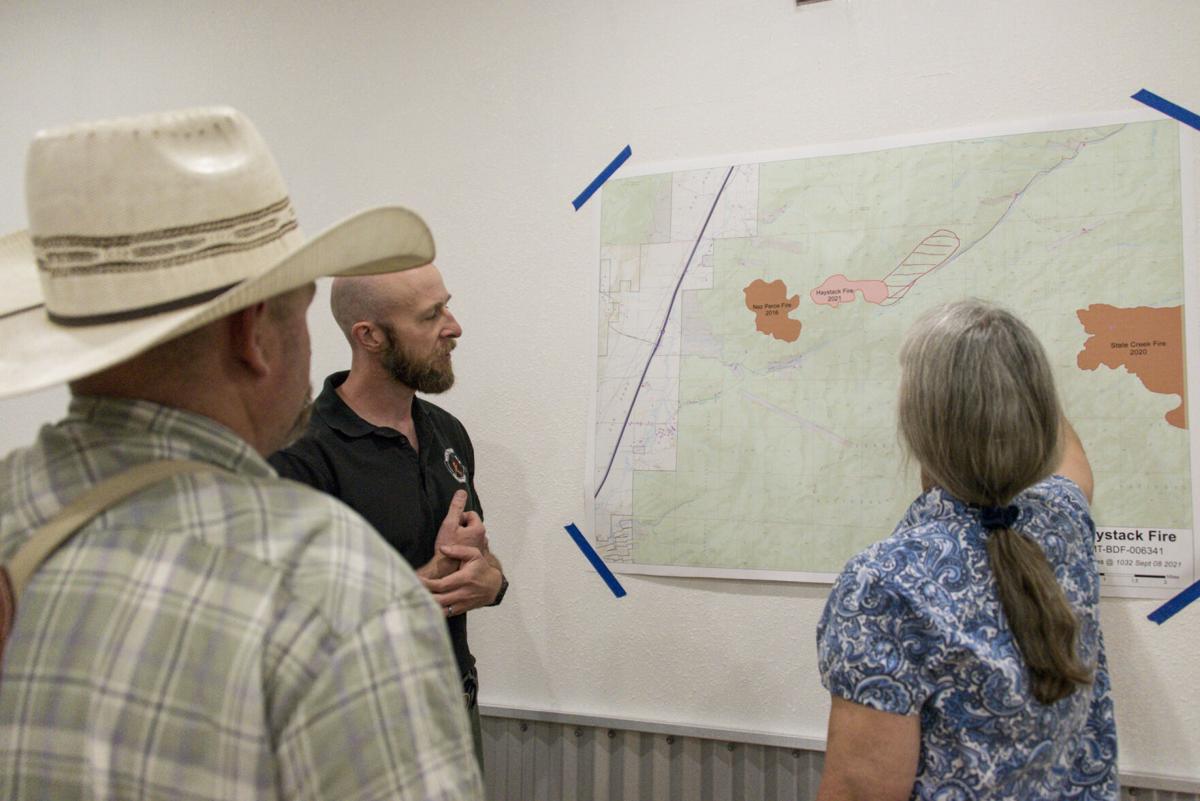 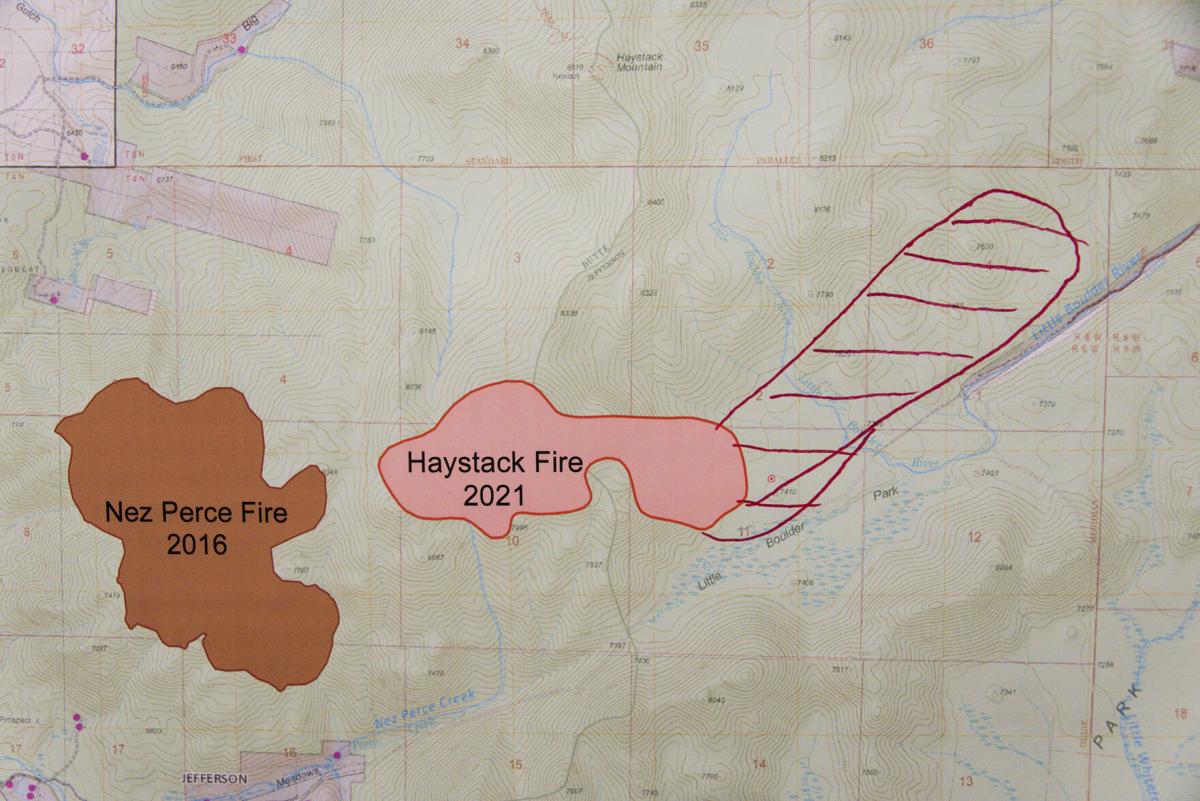 The Haystack Fire southwest of Boulder was estimated at 1,651 acres on Monday morning according to an interactive map maintained by the state Department of Natural Resources and Conservation, showing growth to the northeast on the north side of the Little Boulder River and Little Boulder Road, and minimal growth in patches of timber across the river to the south that ignited at the end of last week.

The Hyatsack Fire grew to about 1,400 acres by midday on Friday and had expanded to areas across the Little Boulder River—to the south of the river and just north of Whitetail Reservoir—according to an interactive map maintained by the state Department of Natural Resources and Conservation. The map indicated multiple isolated patches of fire across the river from the bulk of the fire's area.

The Haystack Fire east of Elk Park has grown to more than 1,200 acres and is burning in the upper reaches of the Little Boulder River drainage after high winds, low moisture and hot temperatures helped the fire run about 1.5 miles to the northeast on Wednesday, expanding it by hundreds of acres.

By Wednesday evening, the head of the fire was in the upper reaches of the Buffalo Creek drainage off of the Little Boulder River, according to Shane Martin, the assistant fire management officer for the Butte Ranger District of the Beaverhead-Deerlodge National Forest, in which the fire is located. Crews performed structure protection for seasonal cabins up Little Boulder Road, including the Shields, Iron Side and Moose Creek cabins. The road is closed at Elder Creek. Trail 778, from Eureka Mine to Moose Creek, and Trail 4082, the Haystack Mountain Trail, are also closed.

The front of the fire was about 9 miles southwest of Boulder and 8.25 miles directly south of Basin. It's about 4.5 miles north-northeast of Whitetail Reservoir. The fire continues to move northeast, and the head of the fire is now about 5 miles northeast of the point of ignition, which was just east of Elk Park and to the south of Haystack Mountain.

Martin, District Ranger Tim Lahey and Public Affairs Officer Catherine McRae held a public meeting at the Elk Park Fire Hall on Wednesday night to address public concerns and update residents on the fire's progress and how the forest plans to fight it. Lahey said a large column of smoke rising from the fire when it burned a pocket of timber on Tuesday prompted the meeting.

"Yesterday, Shane and I were looking at the column coming up and he said, 'I think we ought to have a meeting' … and we pulled this together in less than 24 hours," Lahey said to a packed fire hall.

Martin said Wednesday night that the fire "went a mile and a half today," which Lahey clarified "is not unusual in these conditions."

"I wouldn’t be surprised if it’s down to the Shields and Iron Side cabins [Thursday]," Martin said. "It’s kinda staying on the hillside" to the north of the Little Boulder River. He said his concern is that the fire could jump the river and spread further, something he said is a possibility.

"It wants to keep going east and north, so that’s where most of our attention is going to," he said, noting that the fire is moving into terrain with more consistent fuel coverage as it progresses down the drainage. "It is getting to an area where we’re out of the rock more."

Winds from the south and west, and the burn scar from the 2016 Nez Perce Fire, have kept the fire from spreading west from its point of origin, which would threaten homes and property in the Elk Park area.

Lahey and Martin said that helicopters have been dropping water on the fire since the Forest Service became aware of it on July 31, responding when the fire has shown increased activity. The fire smoldered at around a few acres for weeks before intermittently growing throughout late August, experiencing occasional flare-ups but remaining smaller than 500 acres until a few days ago.

The fire's slow growth, they said, was due to the terrain in the area being mostly rock and large boulders with occasional vegetation, rather than a densely timbered forest where the fire could explode.

"That ground is so rocky up there, it needs wind to go from one piece of vegetation to the next one," Martin said. "It's a pile of rocks with some trees interspersed with it." Lahey said that on flights over the fire since it ignited, he observed that the terrain is "boulders the size of houses and cars."

And that's why, with firefighters' advice, Lahey made the decision at the start of the fire not to fight it on the ground, he said on Wednesday.

"Their advice was strongly, do not put people in here. That’s my decision, I’ll own that," he said, arguing that it was not worth someone getting hurt or killed over "dead lodgepole" and a fire that, until recently, did not threaten any structures.

Martin said that on "that piece of ground, there’s no way to get anyone out of there" if someone was injured. It would also be "nearly impossible" to cut firelines or perform any effective ground-based firefighting in that terrain, Lahey added.

However, as the fire moves toward and into more accessible terrain—more fuel-laden terrain that could allow the fire to burn more and expand faster—Martin and Lahey said crews will work to protect cabins in the Little Boulder area and will continually reassess the viability of ground-based firefighting. The fire could approach fire lines cut last month around the Gatlin Gulch Fire, about 5 miles southwest of Boulder, they said, noting that the Haystack Fire was initially spotted by aircraft fighting the Gatlin Gulch Fire and likely started from a lightning strike around the same time.

However, "moderating weather and potentially up to a half-inch of rain" beginning on Friday could slow the fire's progress, Martin said.

Lahey explained at the meeting that "this is the natural cycle of lodgepole," noting that much of the area the fire is burning is covered in dead and downed trees, and the area will likely be healthier in years to come because of this fire.

The Placer Fire south of Whitetail Reservoir was about 9.5 acres on Tuesday, and though it is remote, Martin said on Wednesday night, crews have performed structure protection at the nearby St. Anthony Mine site and other nearby cabins, and helicopters have been dropping water on the fire.

The fire was discovered on Sept. 4, according to the U.S. Forest Service’s Dillon dispatch center. According to the dispatch center and an interactive map maintained by the state Department of Natural Resources and Conservation, the fire is 7.55 miles west of Whitetail Road, 2 miles south of the southern shore of Whitetail Reservoir and 5 miles northeast of Delmoe Lake.

Martin said that wind could push the fire down the Spring Creek drainage. It's burning in terrain that is rocky and remote, but not as rocky or remote as the Haystack fire, he said.

"That’s where we think it will go," he said.