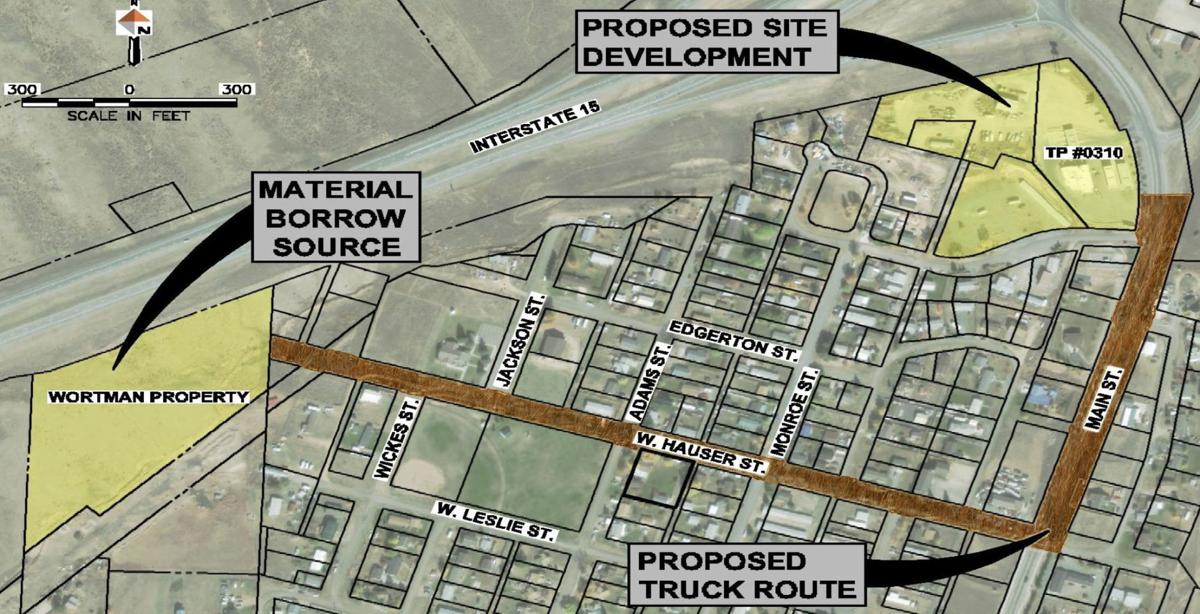 This provided map shows the proposed route to haul fill from its source to Town Pump property. 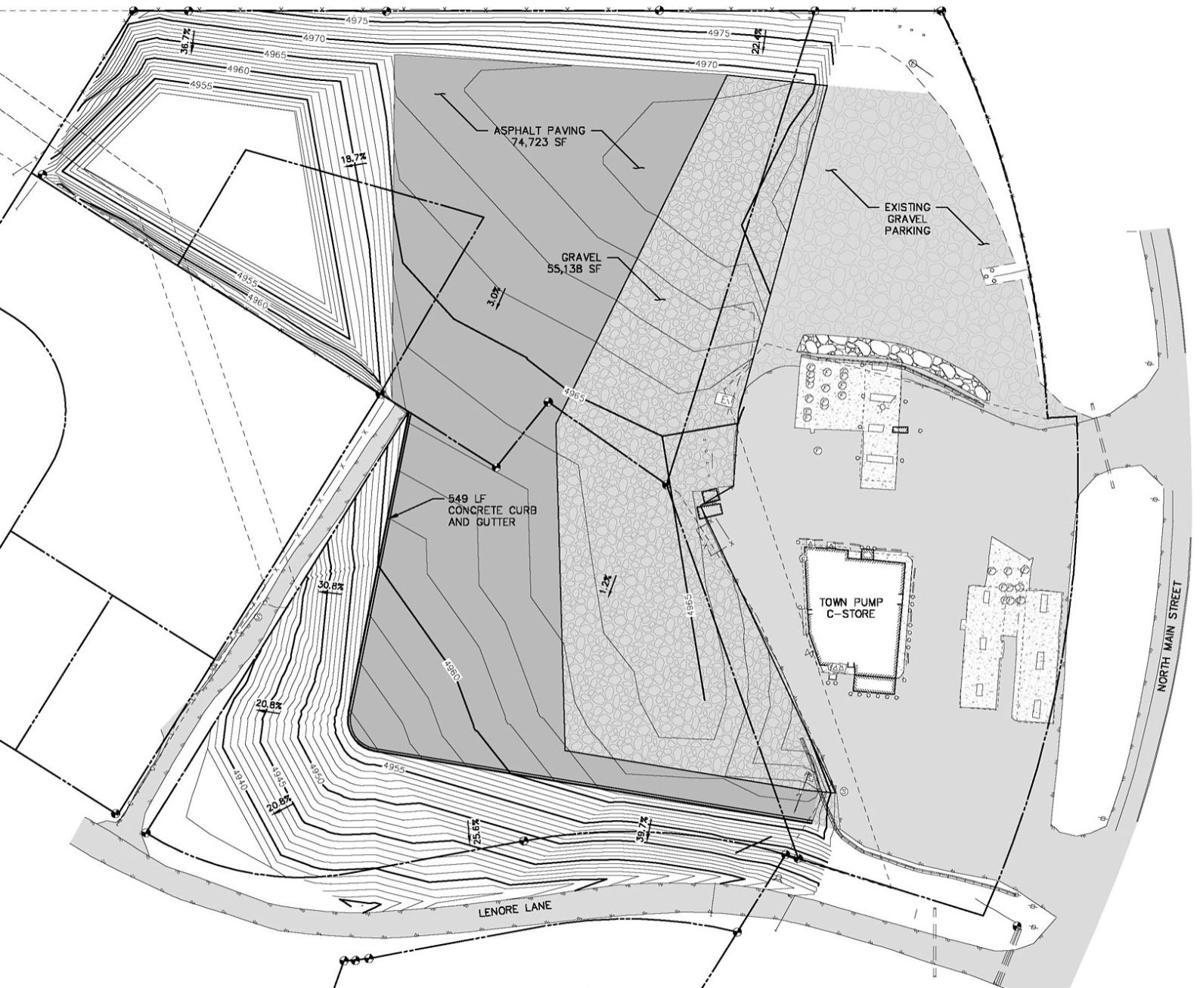 This provided rendering shows the proposed phase 1 construction in dark gray: The use of fill to enlarge the lot, and the creation of a retention pond. 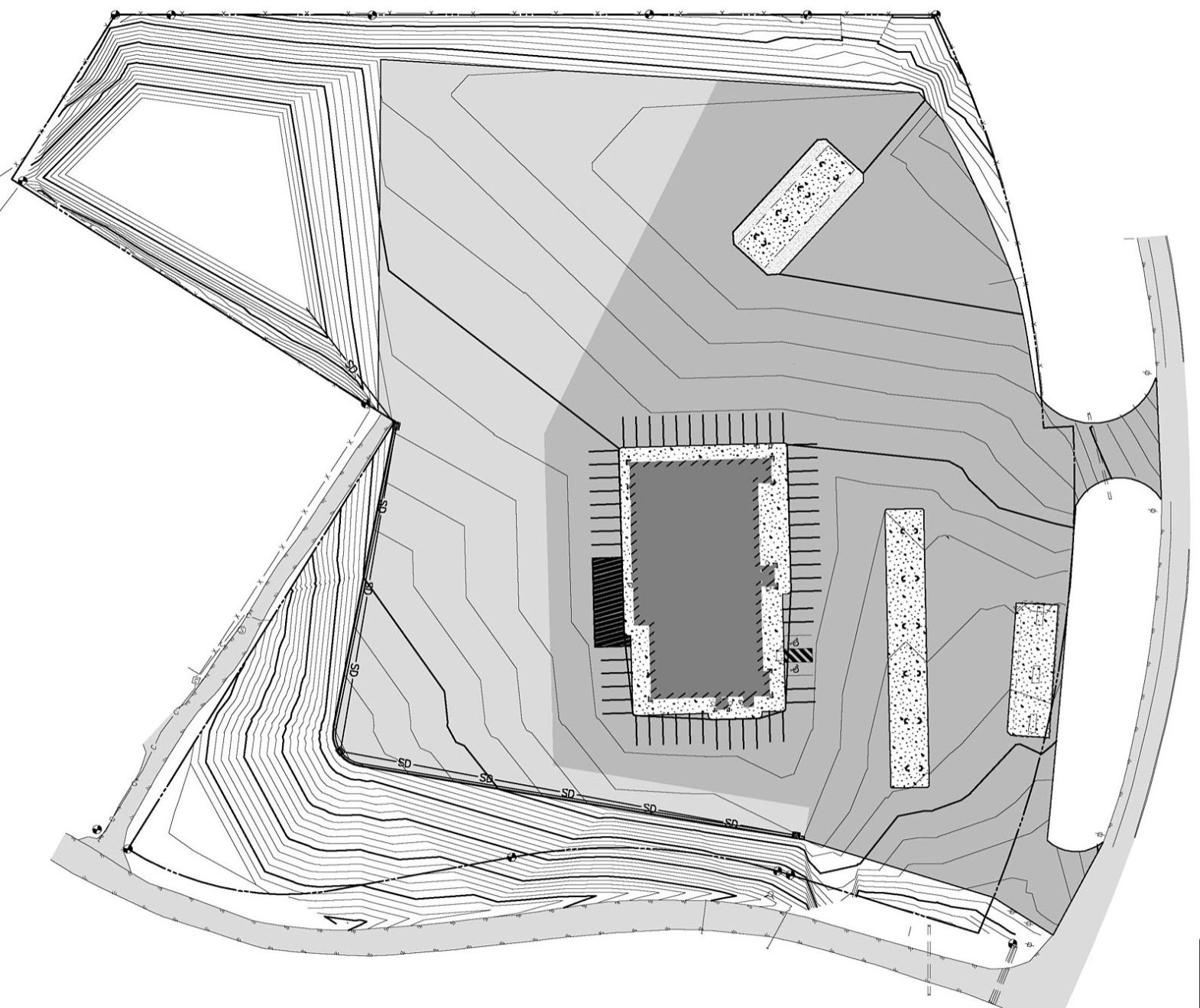 This provided rendering shows the proposed phase 2 construction, of a larger store and parking area, in dark gray.

This provided map shows the proposed route to haul fill from its source to Town Pump property.

This provided rendering shows the proposed phase 1 construction in dark gray: The use of fill to enlarge the lot, and the creation of a retention pond.

This provided rendering shows the proposed phase 2 construction, of a larger store and parking area, in dark gray.

Representatives from Town Pump shared at the Feb. 18 meeting of the Boulder City Council the company’s plans to expand its Boulder store.

According to the draft plan, presented by Dan Sampson, Town Pump’s construction and development manager, and Jeremy Salle of DOWL engineering, construction would happen in two phases and could start as soon as early April.

In addition to an expanded store and casino, construction would add or reposition fueling islands and better separate semi truck traffic from the general traffic flow.

Town Pump wants to begin phase 1 in early April and phase 2 in mid- to late summer, a schedule Sampson wrote the company hopes to firm up “in the next month or so” following the selection of a contractor and depending upon the permitting process.

As far as when the new store might open, Sampson wrote “it is a bit of an educated guess at this point as we still have to go through permitting and complete phase 1 … [but] if all went right and we suffered no further delays we would expect to have the new store open during the spring of 2021.”

At the City Council meeting, the plan for phase 1 was met with two main concerns. One involved transporting the large amount of fill to the site. Sampson said that Town Pump has a “handshake” agreement with Karen Wortman and her husband to take the fill from their property at the west end of West Hauser Street, and he and Salle stated that the plan was to transport the fill to the construction site via West Hauser Street and Highway 69 -- a process could see up to 3,000 truckloads moved along the quiet residential street and busy state highway over several months. People questioned the impact of truck traffic on the street surface and on residents’ quality of life and safety, particularly of children walking to and from Centennial Park.

Sampson and Salle said that the contractor chosen for the project would be required to submit a plan for traffic control, would likely work Monday through Friday and would be expected to return the street to its original or better condition.

In his email to The Monitor, Sampson said that once a traffic plan is approved it would be shared with city officials and all affected residents.

The other issue raised at the City Council meeting was related to the retention pond, which is intended to hold stormwater that flows off the asphalt parking lot and allow it to dissipate by seeping into the ground and through evaporation. Jan Anderson, a homeowner at the north end of North Adams Street, said she was concerned that if the pond ever overflowed it might exacerbate existing local flooding issues.

At the City Council meeting, Sampson and Salle indicated that the pond would be over-engineered to be able to handle a theoretical 100-year, 24-hour storm -- up to approximately 60,000 cubic feet of water.

In his email to The Monitor, Sampson said that “the pond is designed in such a fashion that it would hold all water resulting from nearly all storm events without any [overflow] taking place.”

“The planned design for this pond exceeds the required design standards exponentially,” he continued. “We chose this path because we realize through our previous work with [Mayor] Rusty [Giulio] that there are already some drainage issues with the City storm drain system and we do not want to exacerbate that problem. All ponds must have an outfall so that in the wake of a catastrophic storm event any potential discharge can be controlled without causing damage to the surrounding properties.”

At the meeting Mayor Giulio raised concerns with both the impact of truck traffic on city streets and on whether the retention pond could potentially exacerbate historical flooding issues. He also expressed a concern that the proposed haul route would be a “hard sell” to residents. He reiterated a previous suggestion to explore locating the retention pond on Skytop Ranch land west of Town Pump’s property -- a decision he said would provide a fill source, impact fewer residents during hauling and help alleviate flooding issues.

Sampson responded that he was not opposed to further discussions, but stressed that Town Pump had already invested much time and money in planning and also had to consider its agreements with the Wortmans.

Much of the fill will be used to build a slope down from the parking lot that will cover what is now the RV park on the north side of Lenore Lane. Sampson said the storage facility next to the RV park was offered to the Wortmans “if they wish to salvage it.”

“If the Wortman’s decide they do not want it, it will be torn down,” he wrote.

Sampson noted that the project is entirely funded by the company.