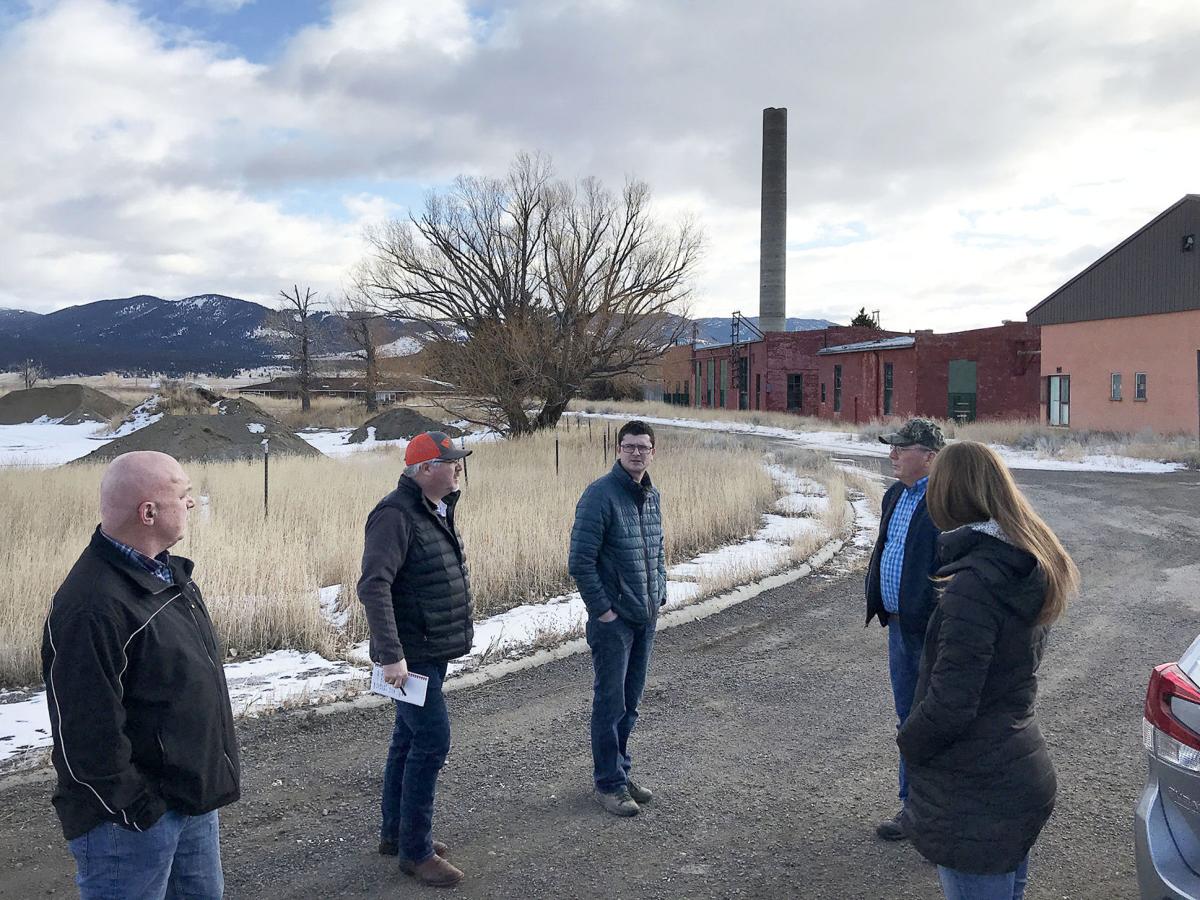 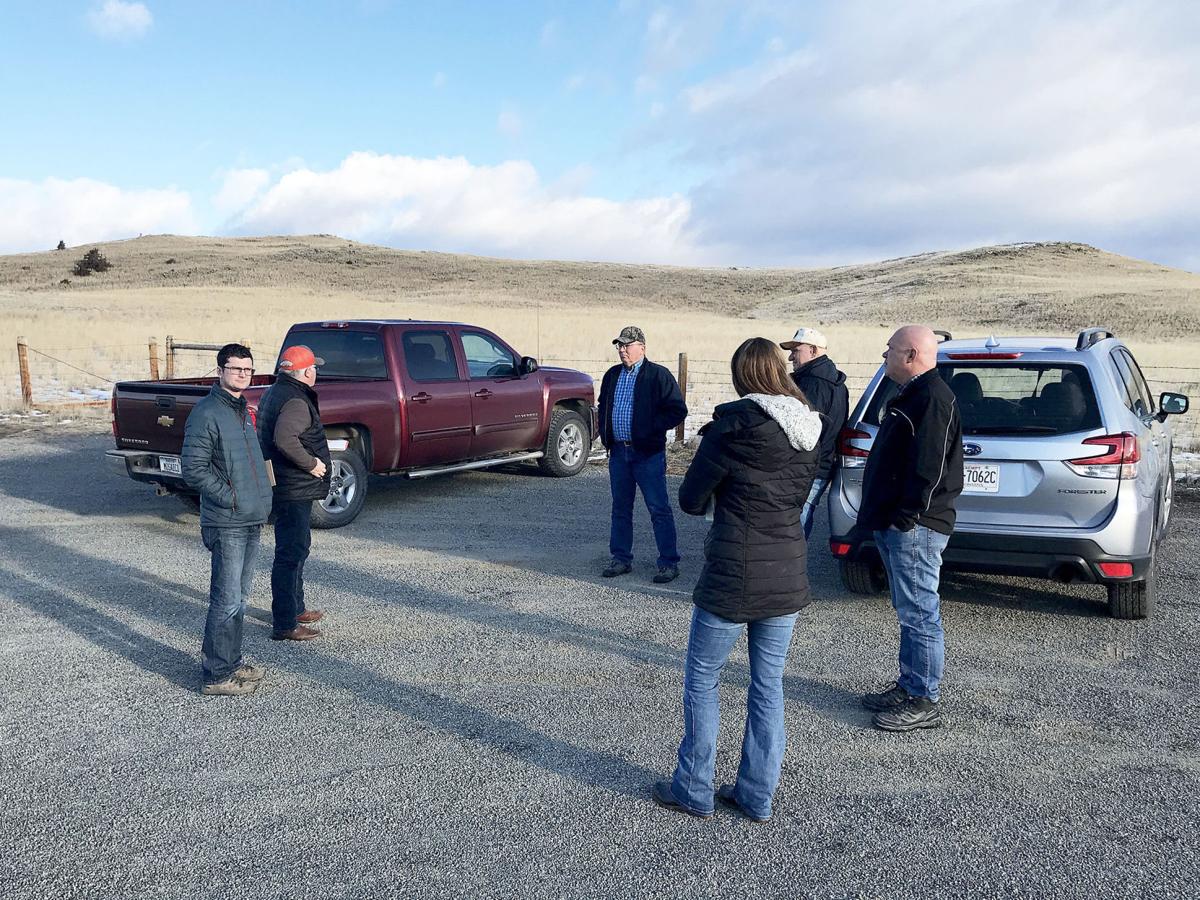 Local officials and representatives of Mosaic Architects and Great West Engineering tour the area west of the I-15 interchange Dec. 13.

Local officials and representatives of Mosaic Architects and Great West Engineering tour the area west of the I-15 interchange Dec. 13.

The project stems from a proposal that originally sought to build the Montana Cowboy Hall of Fame and Western Heritage Center on the west side of the I-15 interchange.That idea died, but the County still hopes to create something similar, either on its own or with another partner.

Matt Aune of Helena-based Mosaic Architecture, the firm hired by Jefferson County to produce preliminary architectural and engineering reports, said the tour’s purpose was to identify at least three sites to evaluate for development potential according to various criteria.

With input from County Commissioners Cory Kirsch and Leonard Wortman and Tom Harrington of Jefferson Local Development Corporation, the evaluation criteria they identified included accessibility, visibility, expandability, infrastructure, cost and the opportunity for a site to spur nearby economic development.

The primary purpose of the Preliminary Architectural and Engineering Report, or PAER, is to suss out development potential for a particular site and estimate the costs involved in making it happen, with the goal of helping to inform a community’s decision for whether and how to proceed with development.

The three sites identified for evaluation are the west side of the I-15 interchange in Boulder; the area of the Bull Mountain Fire Station just south of Boulder, and the Jefferson County Fairgrounds.

Earlier this year, the County’s proposal to locate the Montana Cowboy Hall of Fame and Western Heritage Center on the west side of the I-15 interchange was turned down. Since then, talks have continued to develop something similar there, and the Montana Pro Rodeo Hall and Wall of Fame has expressed interest in somehow collaborating on such a development with the County.

Strengths of the I-15 interchange site include ease of access, “great views” and high visibility from the south, Mosaic’s Ben Tintinger said.

“It’s a little harder to see coming from Helena,” he said, before reminding of an earlier idea where sculptures of cattle could be placed along the southbound lanes of I-15 to attract attention.

Boulder Mayor Rusty Giulio, who tagged along on the tour, expressed concern that development at the I-15 interchange would be a “hard sell to the community,” given that infrastructure already exists elsewhere in town and because “we have so many projects going,” a reference to ongoing talks with the State of Montana of taking over and developing the former Montana Developmental Center campus.

Though the concept of a rest area hasn’t been taken off the table, at least for any development near the I-15 interchange, it was noted that Town Pump’s planned expansion might effectively turn it into what Tom Harrington referred to as a quasi rest stop.

“That’s probably a consideration,” he said.

Commissioner Leonard Wortman acknowledged that representatives of Sky Top Ranch haven’t firmed up any commitment to providing land for the proposed development.

“I haven’t given him definite proposal yet,” Wortman said.

Tintinger said the mostly county-owned area in the vicinity of the Bull Mountain Fire Station “could be really good site” for development, ticking off space for expansion and access to traffic and infrastructure as pluses.

Aune said development at the location potentially could “bring people right to town” and perhaps be a good location for a “smaller scale rest area.”

The existing facilities at the Jefferson County fairgrounds were praised for providing a “western feel” that could suit the proposed heritage center and an accompanying enclosed arena, Aune said.

Other positive aspects included nearby infrastructure and “decent” visibility, despite it being a bit farther from town. Possible negative aspects raised include potential deed restrictions limiting what the land can be used for and limited expandability.

“We don’t have a lot of property left out here,” Kirsch said.

The local officials nixed two sites Mosaic put forth for consideration. One was comprised of ranchlands owned by Sky Top Ranch just north of Cap Hill in Boulder, the other was downtown Boulder itself.

The former location was deemed too close to neighboring properties and land where Giulio said future residential development could conceivably occur, while downtown Boulder has no room for development of the envisioned scope, he said.

One item still undetermined is what to name the project, which has been referred to as some variation of Western Heritage Center, Western Legacy Center or rodeo or cowboy hall of fame.

Commissioner Cory Kirsch noted that referring to the project in terms of a rodeo hall of fame might be “too limiting,” while the MOSAIC representatives said the final name can wait because the PAER will identify the best uses for the sites under evaluation.

Tintinger told The Monitor the PAER might be completed by February and followed by workshops to gather feedback from residents.