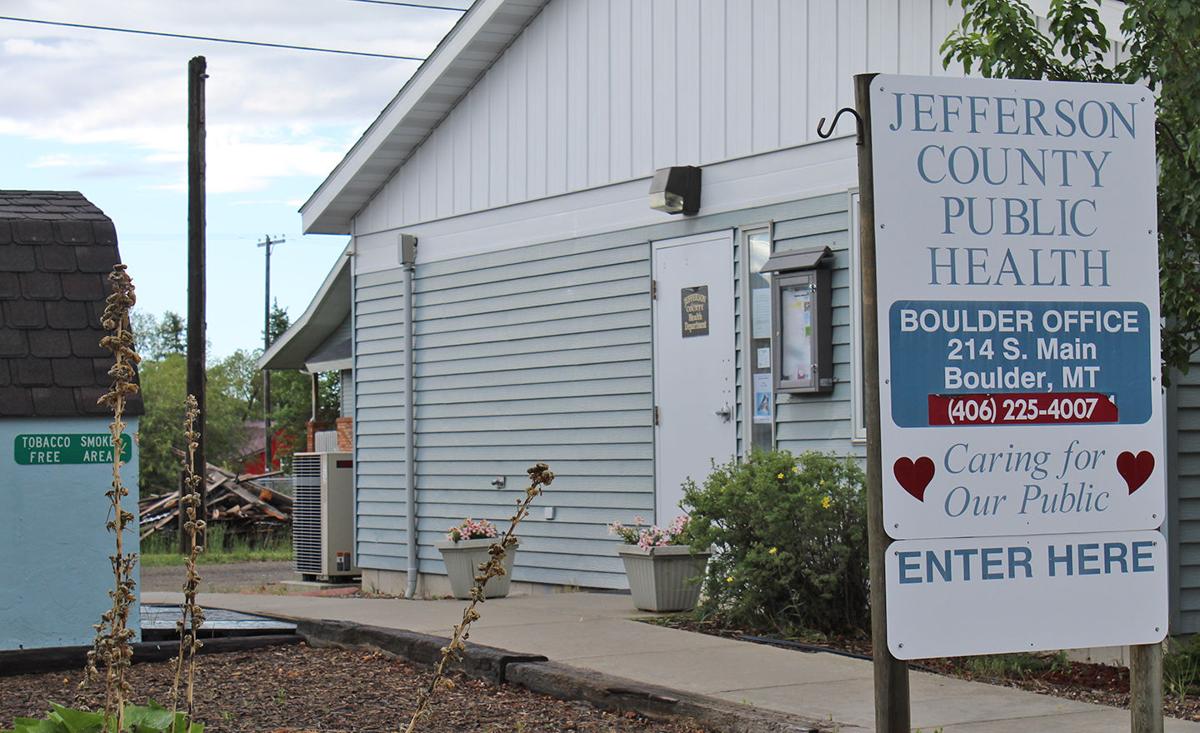 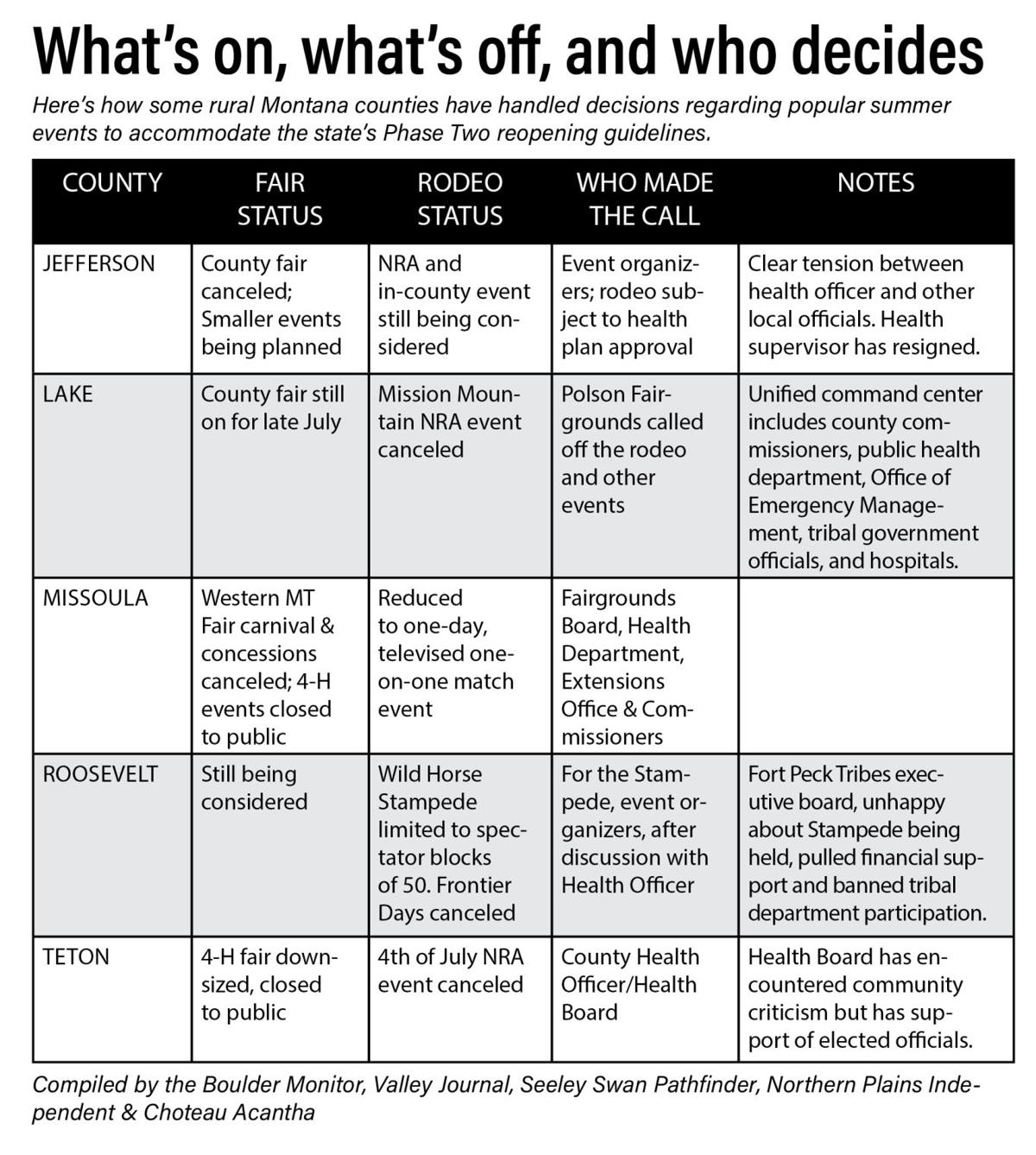 As Montana’s reported COVID-19 cases spike to their highest levels since the pandemic began, tension has emerged between local officials as Jefferson County navigates the line between public health and economic resiliency.

County Public Health Officer Joan VanDuynhoven says she has not much support from local public officials for her state-mandated role to, among other things, “forbid persons to assemble in a place if the assembly endangers public health.”

“I’m not going to let [a public] event of thousands of people happen to let businesses survive. I can’t balance business health with public health” Van Duynhoven said, pointing out that she is a trained nurse and public health is her job.

VanDuynhoven singled out County Commissioner Leonard Wortman, who has been vocal about his objections to the state COVID-19 guidelines publicly, and who recently told the Boulder City Council, “Jefferson County has been led down the primrose path. Jefferson County should be open for business.”

The strain has been growing since the coronavirus crisis hit the state in March. It reflects the different priorities that local officials hold regarding public health and economics. It also reveals how state law regarding county health boards and the health officer role can be open to some interpretation.

Montana statute 50-2-116 empowers local boards of health to “supervise or make inspections for conditions of public health importance and issue written orders for compliance or for correction, destruction, or removal of the conditions;” and to “bring and pursue actions and issue orders necessary to abate, restrain, or prosecute the violation of public health laws, rules, and local regulations.”

It also charges health boards with appointing a health professional as Health Officer, who shall, among other things, “take steps to limit contact between people in order to protect the public health from imminent threats, including but not limited to ordering the closure of buildings or facilities where people congregate and canceling events.”

Health plans for groups of more than 50 people are part of Gov. Steve Bullock’s Phase 2 reopening guidelines for COVID-19 — but the exact size of an event allowed in any locality is at the discretion of the community’s leadership and based on current circumstances.

As of June 25, the health department had received two health plans — from Frontier Days in Whitehall and for a wedding, said Molly Carey, clinic coordinator for the county Health Department. Both of those were approved by the health officer.

Organizers for the Jefferson County Fair and Rodeo are also planning to submit plans. The volunteer-run Fair Board has opted to cancel the full fair, scheduled for late August, and will instead propose a significantly scaled back event. The Jefferson County Rodeo Association plans to continue with its plans for a Northern Rodeo Association-sanctioned event in August. (See story page 1).

The county Health Department has created a form for those wanting to put on events of 50 or more. But that form is more of a guidance tool than something that is approved or rejected outright, Carey explained. The Health Department will work with applicants until an event is deemed acceptable, she said.

Beginning June 25, any plans submitted go to the health officer with copies provided to the Jefferson County Health Board, according to Health Board Chairperson Christina Binkowski.

VanDuynhoven said she then works with the applicant to develop the plan.

Board member Sandy Sacry said the Health Board is discussing whether or not it wants to have the final approval on the health plans. How that works within the law is also being reviewed by the county attorney, she said.

Violations of the governor’s directives can be elevated to a misdemeanor citation, but Jefferson County Attorney Steve Haddon said he favors education rather than what he describes as a “strong arm” approach to COVID-19 violations.

Any prosecutorial action must come from a complaint, and if a citation is issued, the complainant must be willing to testify in court, said Haddon.

Haddon is unsure if a small town atmosphere might make someone reluctant to complain. He said, personally, that locally there seems to be a “somewhat of let’s not rock the boat approach.”

VanDuynhoven said one way the health department has attempted to get around that issue is to tell those who may call in with a complaint to go to Montana’s Consumer Food and Safety website and file it in writing.

This provides a paper trail of complaints to reduce the grudges that people have against each other in a small town, said VanDuynhoven.

“If it is just people telling on each other, that is a psychological issue, not a public health issue,” she said.

For a one time event, VanDuynhoven can’t imagine that anyone would report a violation to the health department — especially if it occurred over a weekend.

The health department is not a 24/7 operation, she said.

In the case of a business not regularly complying with the guidelines, such as social distancing, sanitizing and other actions, VanDuynhoven said she could ask the sheriff to send a deputy to issue a citation, but he would have to agree to do so.

Jefferson County Sheriff Craig Doolittle was asked by email if he would be willing to assist the health officer with issuing citations for violations, but he did not respond.

Wortman said he is not supportive of shutting anything down right now, and did not appreciate the health officer suggesting early in the pandemic that the county consider stopping all events. He was pleased that the health officer has approved the Frontier Days health plan and hopes she does the same for the rodeo and scaled-down version of the fair.

Wortman said if folks don’t feel comfortable going to certain places, then don’t go. As far as being a role model for the governor’s directives, “I don’t agree with them at all,” he said.

VanDuynhoven acknowledged that COVID-19 has added a layer of tension in the community, and it has been an issue for her department. One staffer, Jefferson County Public Health Department Supervisor Karen Wandel, recently resigned her post.

Wandel said that the COVID-19 pandemic gave her a chance to reevaluate where she could be most effective and concluded that it was time to go help her parents in Spokane. She said her job has always been educational, as well as following up with various communicable diseases, such as contact tracing for COVID-19. Enforcing COVID-19 guidelines was not her role, she said.

Binkowski said the Health Board and Commissioners are passionate about the community and what is in the best interests of the public. Binkowski believes the Board and the health officer have received support from the Commissioners on the difficult decisions that have arisen due to the pandemic.

“This has been a team effort and none of us have ever had experience with anything like this pandemic, so it’s had to become a team effort. The Jefferson County attorney has also been a great help in guiding us through the legal aspects of our responsibilities,” said Binkowski in an email.

The tensions over COVID-19 may have also ignited a common aspect of living in a small community.

When asked if he thinks folks in a small town fear being bullied or ostracized for reporting violations, Haddon said that could be the case.

However, if businesses and events put up signs, make announcements about social distancing and other directives and people do not comply, “how are you going to police that,” said Haddon.

The establishment or event could ask violators to leave, he said.

“There has to be a degree of common sense to this,” said Haddon.