Skip to main content
You are the owner of this article.
Edit Article Add New Article
You have permission to edit this article.
Edit
Home
COVID-19
News
Sports
Features
Surveying the Views
Multimedia
Obituaries
e-Edition
Classifieds
Legal Notices
1 of 6 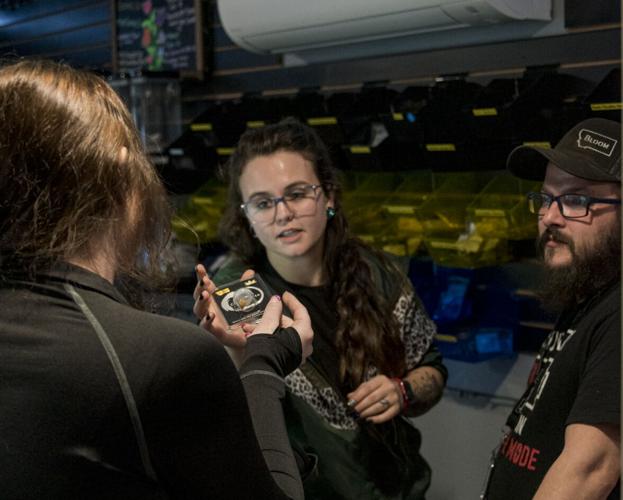 A Boulder resident (left) purchases marijuana products from store manager Kaylee O’Brien (center) and budtender Jeramy Frederick (right) at Bloom Dispensary in Boulder on Monday. Recreational sales of marijuana products in counties and towns across Montana, including in Boulder, began on Jan. 1. 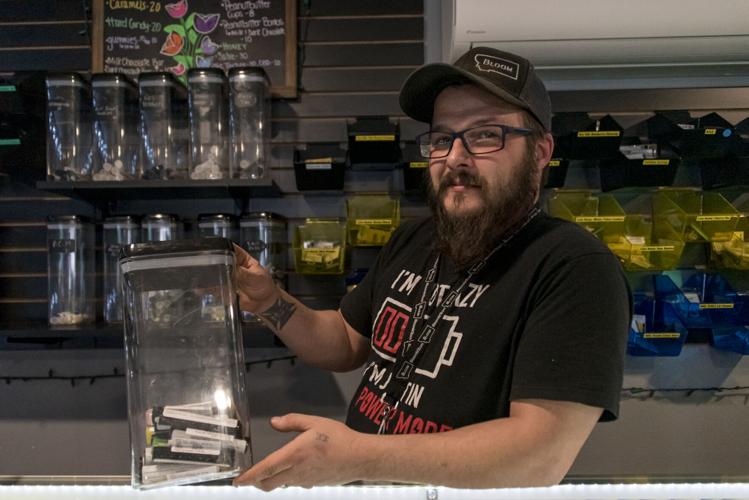 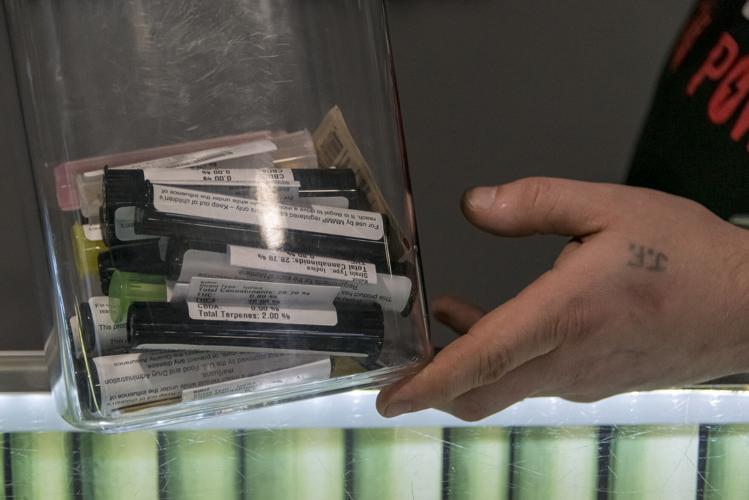 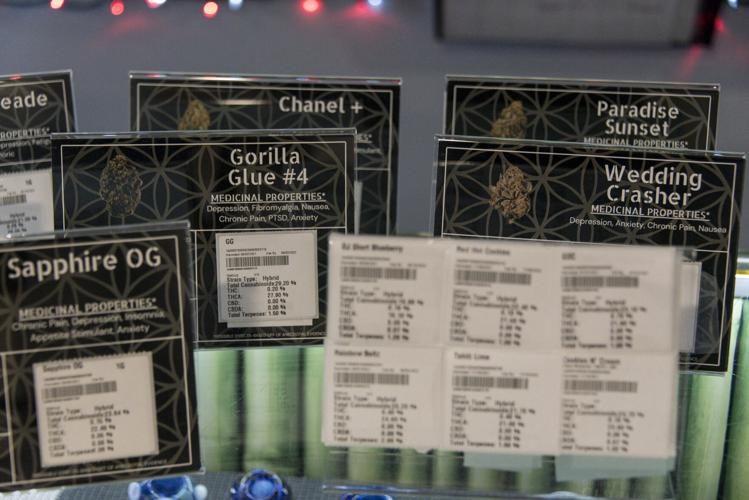 Placards at Bloom dispensary in Boulder display an array of attributes of various strains of cannabis products available for sale on Jan. 17. 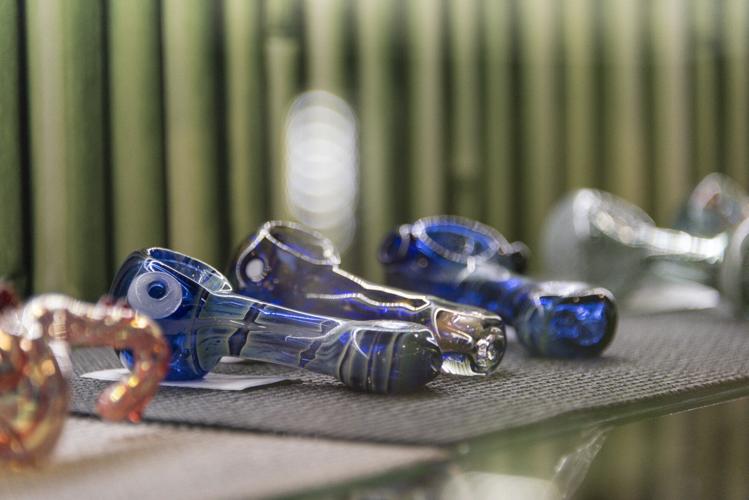 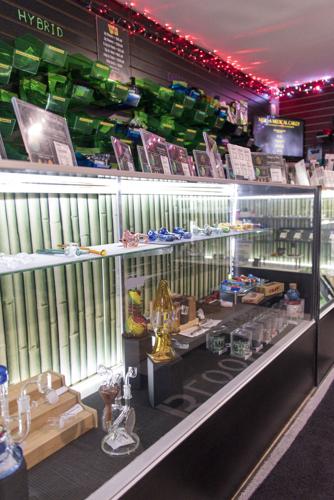 A Boulder resident (left) purchases marijuana products from store manager Kaylee O’Brien (center) and budtender Jeramy Frederick (right) at Bloom Dispensary in Boulder on Monday. Recreational sales of marijuana products in counties and towns across Montana, including in Boulder, began on Jan. 1.

Placards at Bloom dispensary in Boulder display an array of attributes of various strains of cannabis products available for sale on Jan. 17.

Editor's note: Because of incorrect information on Bloom dispensary's website, a previous version of this story stated the wrong street address for the Bloom location in Boulder. The story has been updated to reflect the correct address.

Almost three weeks have passed since recreational cannabis sales became legal in Montana on Jan. 1, and at Bloom dispensary in Boulder, the change has boosted sales and brought a diverse array of customers into the store—and the brisk business shows no sign of letting up.

The dispensary, located at 102 Lenore Lane, is part of a chain of 21 cannabis dispensaries across Montana. Opened in early 2020, the store sold exclusively medical cannabis, or marijuana, products to Montanans with a valid medical license.

But on Jan. 1, 2022, recreational pot got the green light in counties across Montana, including at Bloom's Boulder location. Montana voters approved recreational cannabis sales in 2020, when Initiative 190 passed with 57% of the vote statewide. In its 2021 session, the Montana Legislature established a regulatory framework for sales and passed legislation that allowed recreational sales only in counties where a majority of voters supported legalization, so-called green counties.

Jefferson County went green on Jan. 1, and the response at Bloom, according to store manager Kaylee O'Brien, has been overwhelmingly positive.

She said that the addition of recreational sales—the store still caters to medical card holders—has brought "So many good things, definitely for the better. We’ve not only doubled our sales, but customer-wise we’ve doubled the customers.

O'Brien, a 28-year-old longtime Boulder resident, said that edible products containing activated THC, a psychoactive compound found in cannabis, and pre-rolled marijuana cigarettes, generally called joints, have been the top-selling products at the store so far this year.

"Just something for people to pop out the door with quick," she said, adding that fears of supply shortages, particularly among medical cannabis products, have yet to be realized at the store. "We’ve got tons and tons of recreational edibles available. We still have tons of medical specific items up there as well ... We’re definitely able to keep up with the demand, which is great."

And that demand has markedly increased. O'Brien said that daily sales before recreational cannabis was available were about $400 to $600. Now, recreational and medical sales combined bring in about $1,100 to $1,500 daily, and that increased business has been steady.

"It’s been pretty consistent, we do get a few rushes every now and then ... and that seems to be right after work time," she said. "Otherwise it’s very consistent throughout the day."

The customer base, however, is anything but consistent: Recreational cannabis, she said, has attracted droves of clients from first-time buyers who just turned 21 and are newly eligible to purchase cannabis, to elderly folks who span a broad spectrum from longtime consumers of marijuana to first-time buyers or those who are simply curious.

"We have quite the elderly community that come into our store. They’re great," she said, adding that the question she fields most often from older customers is, "Are there other elderly people beside me that come in?”

The answer, she said, is an emphatic yes, although the customer base is not only elderly people.

"I’d say we don’t have a specific group, it’s pretty generalized—definitely more leaning on the elderly side, but at the same time it’s pretty broad," she said. "I’d say it’s a pretty good mixture. We literally see everybody in a day, probably. Your working-class mom comes in when she’s off work, the construction workers up there [at Town Pump], we had an 80-year-old man come in, then we had some 23-year-old girls."

Some customers are well versed in the wide variety of cannabis products available at the dispensary, O'Brien said, including the 55 strains of cannabis available in concentrate oil, pre-rolls and simple marijuana flower. For the uninitiated, O'Brien and her two expert budtenders—"actual cannabis professionals"—are on-hand to walk customers through the buying process.

"We kind of like to feel the person out, what they’re looking for," she said, noting that the entire staff is continually training and familiarizing themselves with new product that arrives weekly. "We're here to help people."

As a certified nursing assistant, O'Brien said she has found herself educating recreational customers on the benefits of cannabis beyond simply getting high. She said that she consumes CBD, a non-psychoactive compound found in cannabis, instead of prescription anxiety medication.

But there's also a raft of regulation to educate about, too. Recreational customers must be 21 or older and prove their age with a valid photo ID—out-of-state IDs and passports are fine, she said—and customers are limited to an equivalent of 1 ounce of product each day: about 28 grams of marijuana flower, 8 grams of concentrate or 800 milligrams of edibles. Products cannot be opened or consumed in Bloom or on the premises, she said, noting that she cannot control how customers consume their purchase after they leave.

"They’re still liable to get a DUI if they get pulled over," she said.

But so far, O'Brien said, she hasn't heard any negative feedback around town about the dispensary, her working there, or the dawn of recreational cannabis in Montana.

And in the store, it's "just happy customers, curious customers, even if they’re just here to check it out for the first time."