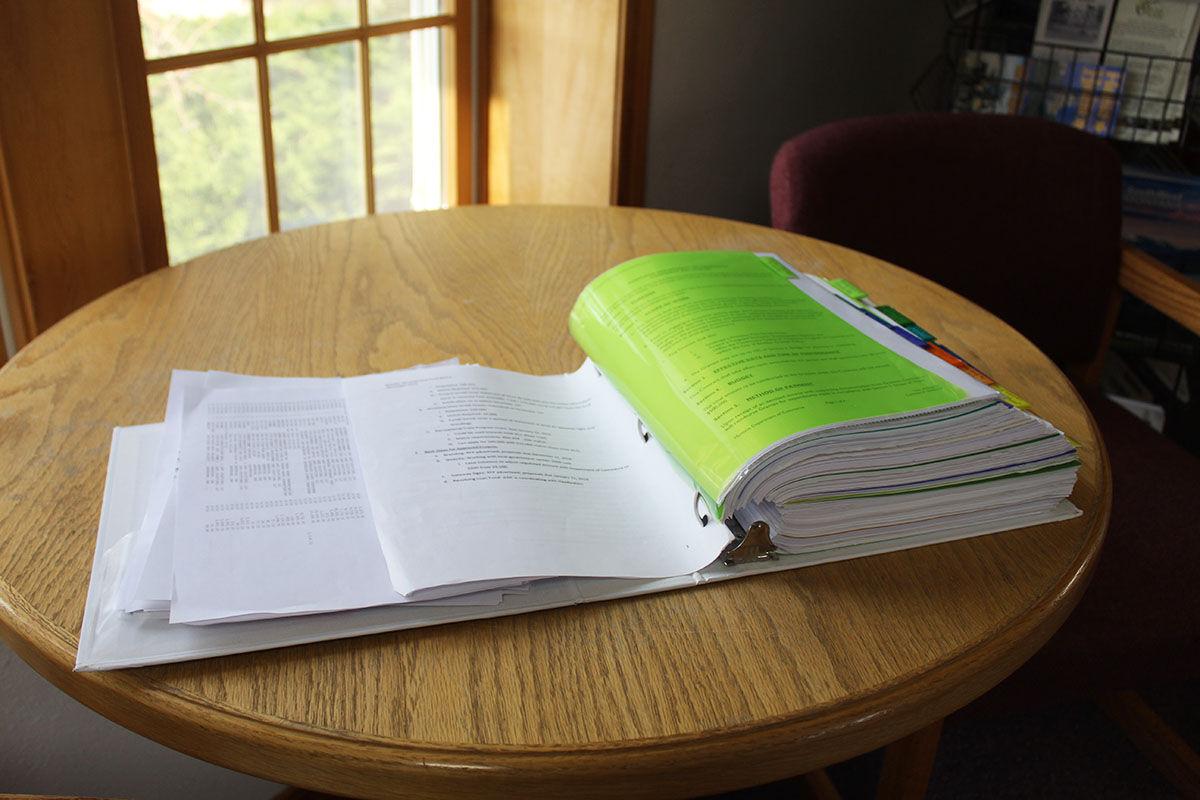 The project book used by the city to keep track of the Boulder Development Fund documents. 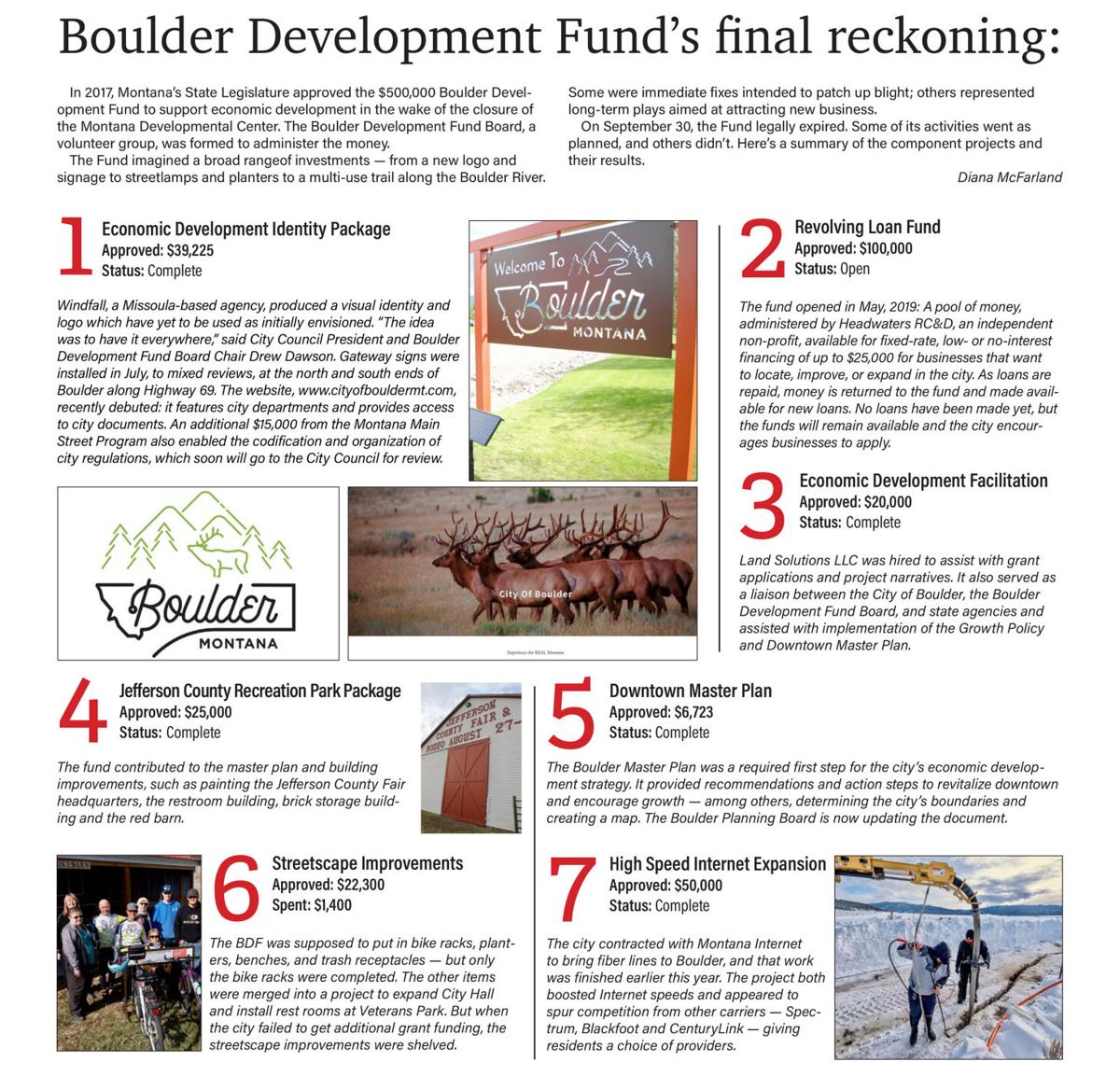 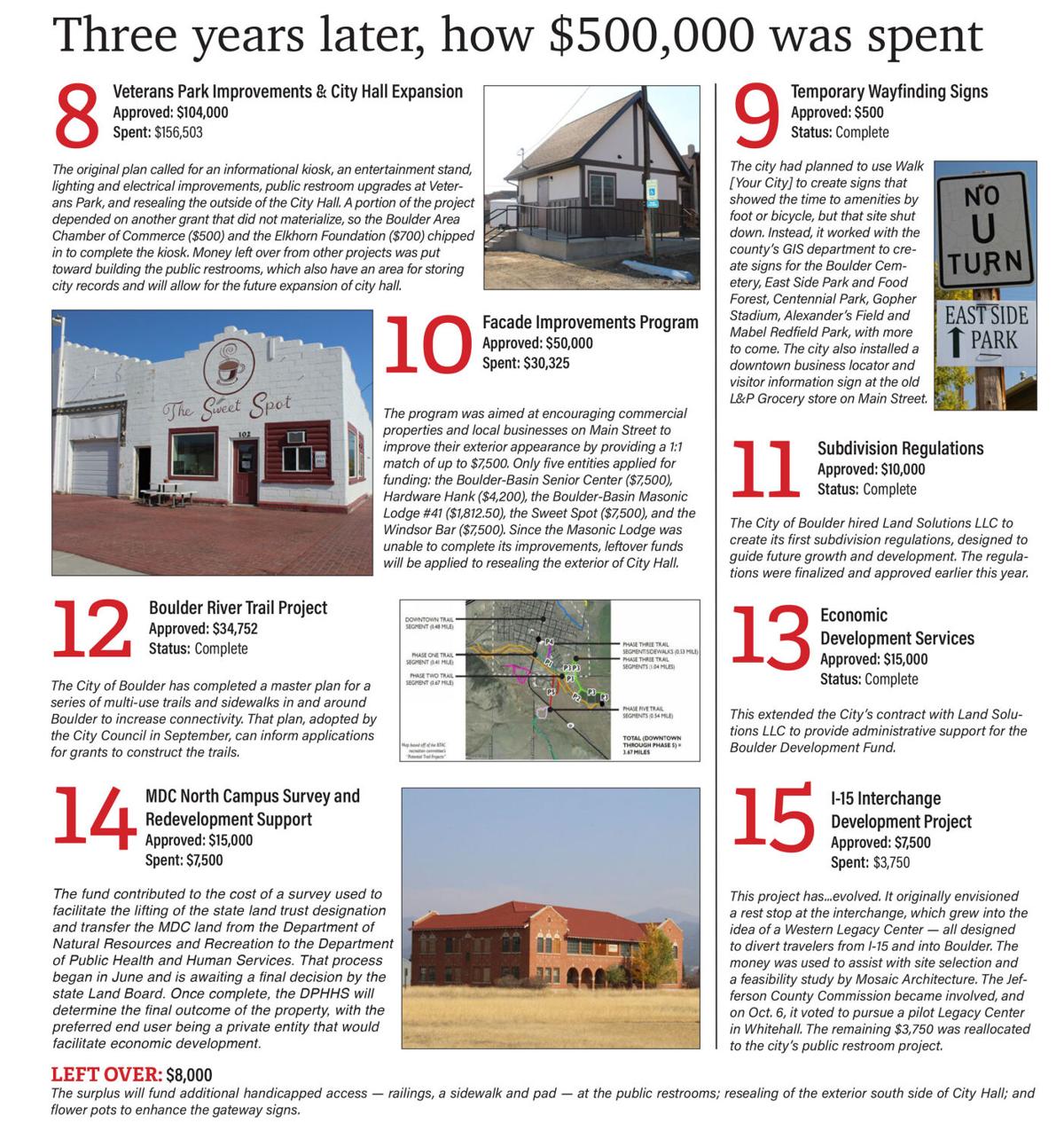 The project book used by the city to keep track of the Boulder Development Fund documents.

The process that began during the grieving period following the 2015 announcement that the Montana Development Center would close culminated last month as the City of Boulder sent off its final invoices for the 15 projects that comprised the Boulder Development Fund.

“We spent every penny,” said Boulder City Council President Drew Dawson, who also chaired the Boulder Development Fund Board, of the $500,000 that had been appropriated by the Montana Legislature in 2017 to compensate the city for the loss of 250 jobs, and to help it devise a plan to move forward without the MDC, which had been an integral part of the city for generations.

The closing of the MDC had galvanized the city’s residents, and over the years had evolved into a community effort to identify priorities to revitalize Boulder, launch projects to accomplish those goals, and obtain the required funding.

In the end, the city identified 15 projects that ranged from creating a trails plan to devising new subdivision regulations.

“This process gave the community a sense of investment, input and visibility. The entire project enhanced pride and visibility in Boulder,” said Dawson.

Tom Harrington, project coordinator with the Jefferson Local Development Corporation, said the Boulder Development Fund gave the community an opportunity to pull together and see what it could do, giving it some control over its destiny following a decision — the MDC closure — it could not control.

The process began with small study groups, followed by the formation of the Boulder Transition Advisory Council, which approached the state legislature for funding. The legislature appropriated the funding package to be administered by the Department of Commerce.

“Everyone starts feeling like they have an impact,” said Harrington, adding that as the Boulder Development Fund projects have been completed, residents have been able to see the finished products and know they were a part of it.

Some pieces of the overall project have led to immediate and visible results, such as adding high speed internet, the facade improvement program and the public restrooms at Veterans Park, said Dawson.

Others are more subtle, but will provide a foundation for the city as it moves forward, such as the Downtown Master Plan, the Boulder River Trail Master Plan and Feasibility Study, and the codification and organization of the city’s regulations.

The most disappointing part of the overall project was the failure to complete upgrades of Veterans Park and streetscape improvements, said Dawson. The original plan had included trash receptacles, benches and planters on Main Street, and an entertainment stand, lighting and electrical upgrades at Veterans Park.

Because those items also relied on an additional grant that was not successful, that project had to be changed, said Dawson.

The city will consider ways to revisit the streetscape and Veterans Park improvements, but limitations exist with manpower and funding, said Dawson.

In the end, however, the city was able to build new public restrooms, which are located behind city hall at Veterans Park.

The other project that changed over time was the development of the I-15 interchange — with an eye on attracting motorists traveling along the interstate into the city. It began as a rest stop, which did not make the state’s improvements list. The project then morphed into an attempt to relocate the Montana Cowboy Hall of Fame — an effort that also failed. The final iteration was a Western Legacy Center at the I-15 interchange, but due to funding concerns, the Jefferson County Commission voted instead to investigate the feasibility of putting a pilot facility in an existing building in Whitehall.

Dawson believes that a facility in Whitehall can still have a positive impact on Boulder by heightening awareness of other amenities in the county, as well as providing a gift shop where local artisans and entrepreneurs can sell their wares.

And over the years, the process provided other intangible benefits, such as getting different groups to work together on a unified goal.

What worked particularly well was the cooperation between the JLDC, the city and the Boulder Transition Advisory Committee, said Dawson.

The Boulder Transition Advisory Committee is made up of volunteers that meet monthly with an informal format that has been good for generating ideas and energy, said Dawson.

Meanwhile, the JLDC managed the funds, the city kept track of procurements and expenditures, and the public was able to track the transparency of the process, said Dawson.

The city also avoided the temptation of “frittering away the money” on pet projects, he said, adding that the many volunteers who worked on the projects contributed to their success.

Dawson hopes that the momentum and collaboration forged through the Boulder Transition Advisory Committee will continue.

“We need to keep that process. It has produced results, he said.