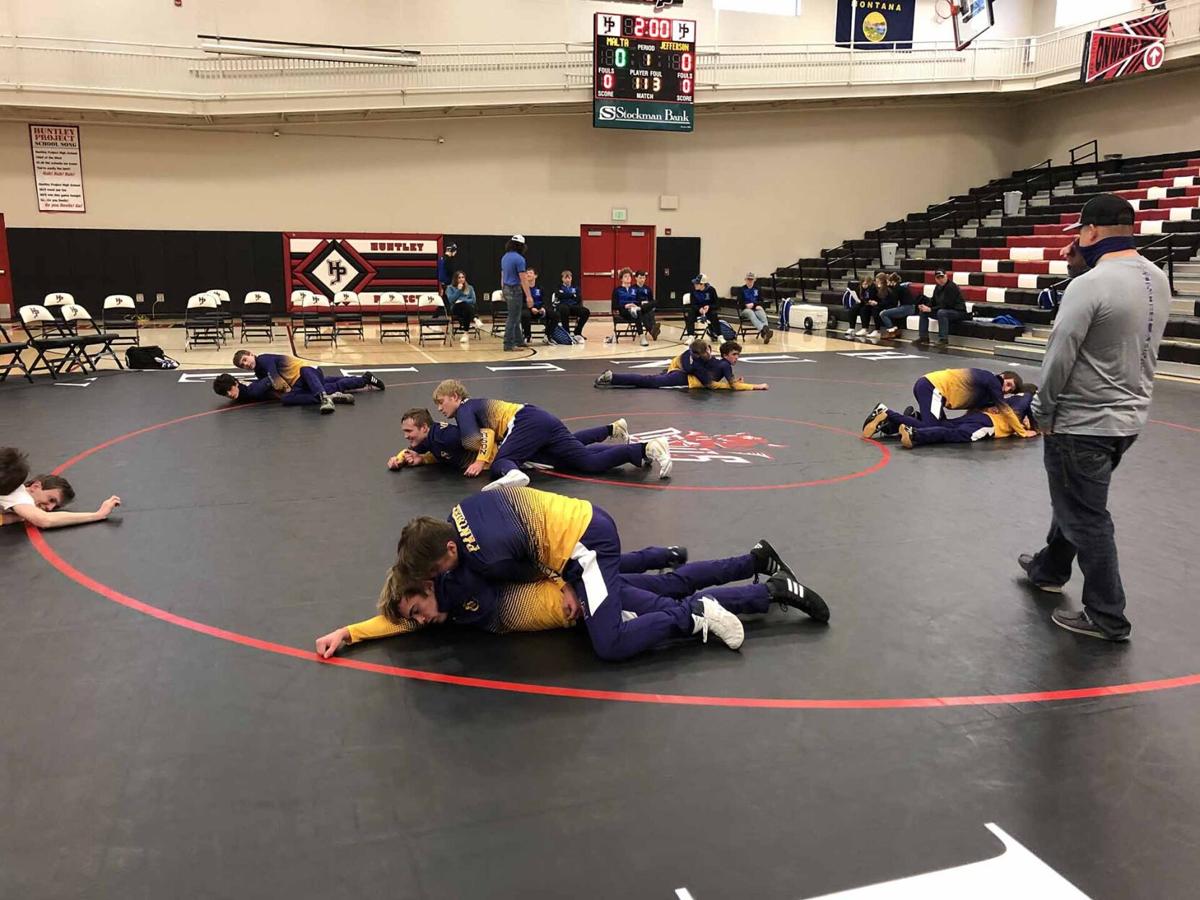 The Jefferson High School wrestling team warms up before taking on Huntley Project on Saturday. (Photo by Troy Humphrey) 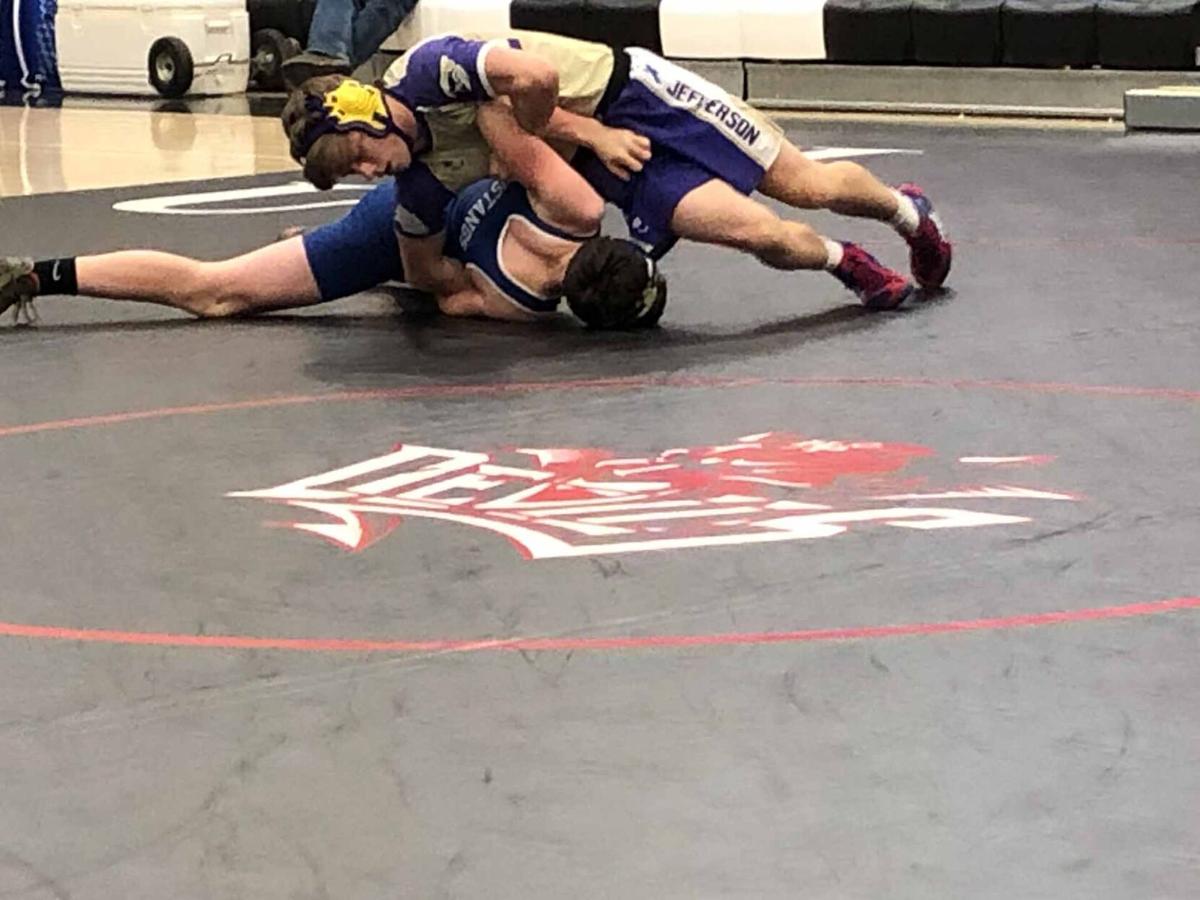 Jace Oxarart gets the advantage on his opponent Saturday against Huntley Project. (Photo by Troy Humphrey)

The Jefferson High School wrestling team warms up before taking on Huntley Project on Saturday. (Photo by Troy Humphrey)

Jace Oxarart gets the advantage on his opponent Saturday against Huntley Project. (Photo by Troy Humphrey)

A quarantined Anaconda team sidelined the Panthers without a match on Friday, but the team went on the next day to defeat Malta and make a strong showing against last year’s state runner-up, Huntley Project, on the Red Devils’ home turf.

Huntley Project also had most of its athletes return this year.

Leo Anderson, (103 pounds) started off the match against the Red Devils with a quick takedown and a pin, securing six points for the Panthers.

Dylan Mikesell was defeated 11-3 at 113 pounds.  Jefferson would forfeit 120 pounds.  Huntley would win the next two weight classes against Isaac Van Blaricom at 126 pounds and Zack Supalla at 132 pounds.  Jefferson was able to get back some team points when John Armstrong got a first period pin at 138 pounds.  At 145 pounds, Jace Oxarart showed a lot of heart to come from behind to win his match 8-6 in the final few seconds.  The team score stood at 22-15 in Huntley’s favor, but the home team got on a roll and put the dual out of reach.

Huntley would secure victories at 152 pounds over Keaton Poulsen, 170 pounds over Miles Dodge and 182 pounds over Braeden Jones.  Jefferson did not have a wrestler at 160 and 205 pounds which enabled Huntley to score team points in both those weight classes.  In the final match of the varsity dual, Matt Riehl (285 pounds) would win by second period pin in a wild match that went back and forth. Huntley would win the dual 52-21.

In exhibition matches, Dominick Davis would be defeated twice, Mikesell won by pin and Colman Thornton would also win by pin.  Van Blaricom was defeated to finish out the matches.

Next up that day was Malta.

Davis got the team scoring with a win at 113 pounds, followed by Mikesell at 120 pounds, Van Blaricom at 126 pounds and Supalla at 132 pounds.  Armstrong stapled his opponent in the first period at 138 pounds, while Poulsen scored team points as well at 145 pounds.  Oxarart scored a third period pin at 152 pounds to put Jefferson up 48-0.  The Panthers would again forfeit 160 and 205 pounds, this time giving Malta 12 points.  Braeden Jones won a 7-0 decision at 182 pounds while Miles Dodge and Matt Riehl were defeated at 170 and 285 pounds, respectively.  Anderson added the final six points for the team at 103 pounds, giving the Panthers a win with   51-24.

Coach’s take: We wrestled great as I team and I was super proud to see how we competed against some of the best competition in the state, especially with so many freshmen in the lineup.  Although we are going to do a lot of traveling this season, it is really important to seek out tough competition to make us better as a team.

Mikesell has been selected by his coaches as the JHS Panther Wrestler of the week.  Mikesell recorded two wins on the day and in his match against Huntley he was paired up against an opponent that finished second at state last year.  Mikesell hung in the match and showed a lot of grit for a freshman to only be defeated by a major decision.

Mikesell also had the quick pin of the week for the Panthers when he pinned his opponent in 28 seconds during the Huntley Project exhibition matches.

The next action for the Panther wrestling team will be a home dual on Friday, Jan. 15 against Cascade at 3 p.m. and Deer Lodge at 6 p.m.  The team travels to Townsend to take on Colstrip and Red Lodge on Saturday, Jan. 16.  Action gets underway at 1 p.m.