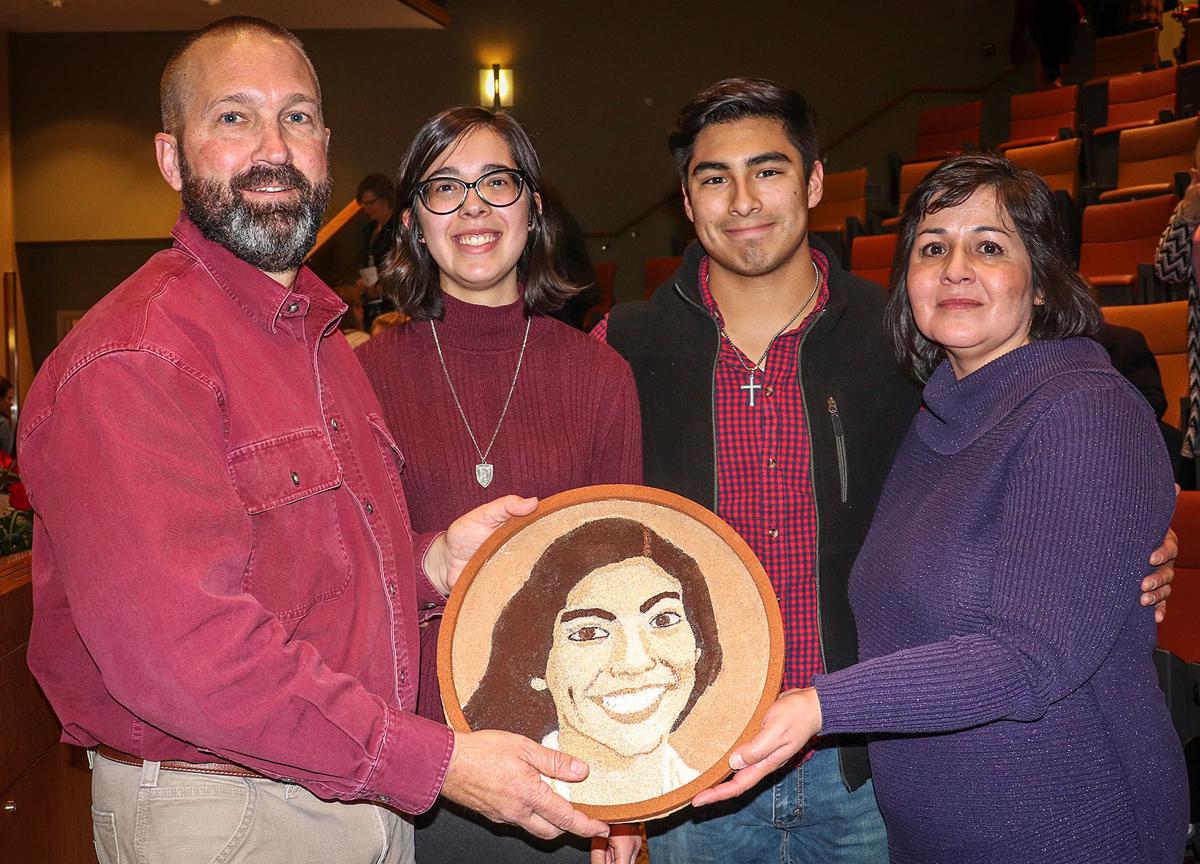 The Shepherd family — from left, Derrek, Lauren, Sam and Janene — hold a floral portrait of their late daughter Julie at a Nov. 12 event in Great Falls honoring her organ donations. 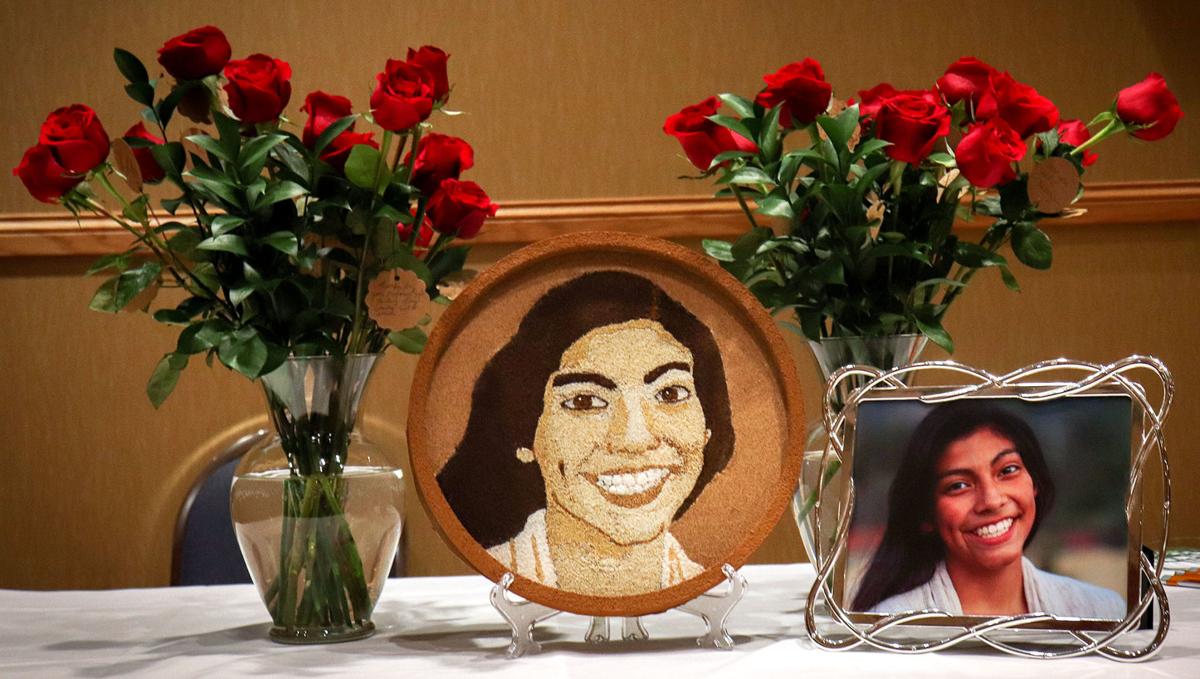 A floral portrait, or floragraph, of Julie Shepherd sits next to the photograph that served as its source at a LifeCenter Northwest event held Nov. 12 in Great Falls in honor of her organ donations. 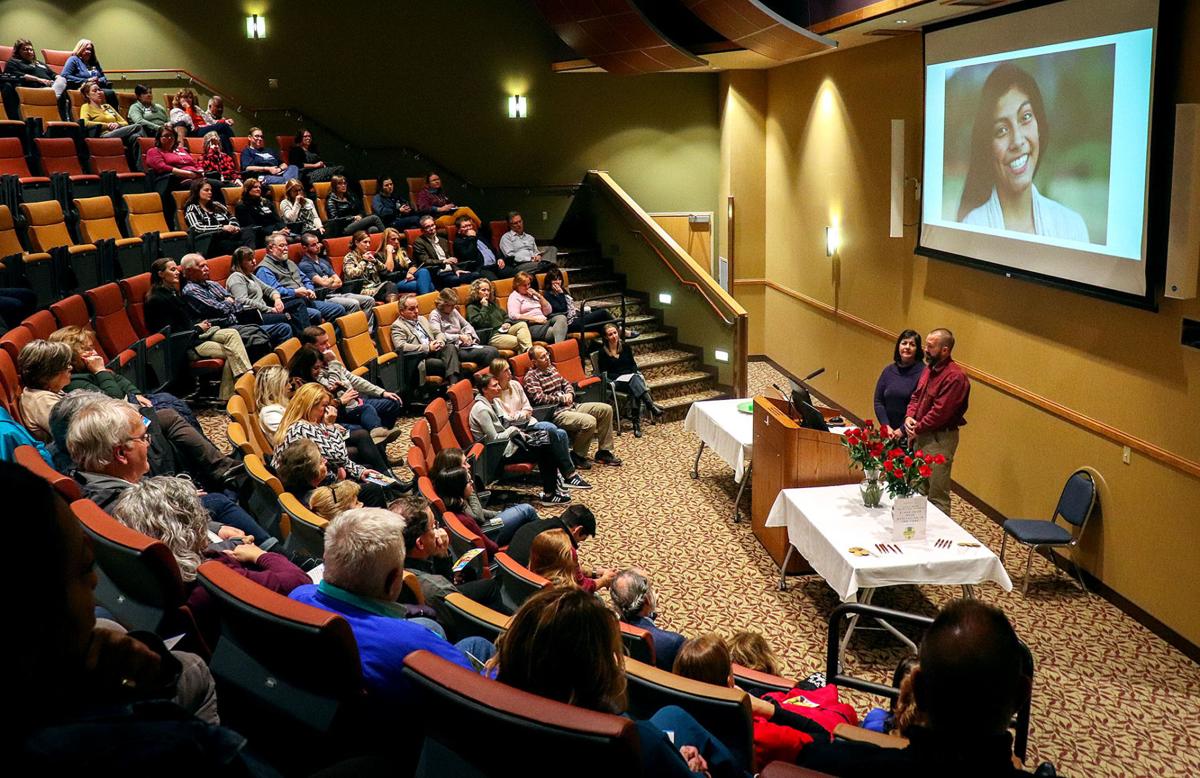 Janene and Derrek Shepherd, at the podium at lower right, speak about their late daughter Julie beneath a photo of her at a Nov. 12 event in Great Falls honoring her organ donations.

The Shepherd family — from left, Derrek, Lauren, Sam and Janene — hold a floral portrait of their late daughter Julie at a Nov. 12 event in Great Falls honoring her organ donations.

A floral portrait, or floragraph, of Julie Shepherd sits next to the photograph that served as its source at a LifeCenter Northwest event held Nov. 12 in Great Falls in honor of her organ donations.

Janene and Derrek Shepherd, at the podium at lower right, speak about their late daughter Julie beneath a photo of her at a Nov. 12 event in Great Falls honoring her organ donations.

In early January 2017 at the age of 17, Julie Shepherd of Jefferson City cut short her long, dark hair and donated it to an organization that makes wigs for children undergoing treatment for cancer.

That gesture — symbolic of her caring ways, said her father Derrek — made it easy for her family to agree to donate her organs after she took her own life, less than a month later, following a serious depression.

“She cared about people a lot,” he said. “We knew it would be something she wanted.”

This past July, Julie’s family — father Derrek, mother Janene, brother Sam and sister Lauren — learned that she would be honored for her organ donations in the Rose Parade on New Year’s Day in Pasadena, California.

The honor comes by way of LifeCenter Northwest, the organization that made it possible for Julie’s heart, pancreas, liver, lungs and both kidneys to benefit six people.

Julie is one of 44 deceased donors selected by LifeCenter Northwest and similar organizations nationwide whose likeness — in the form of floral portrait called a floragraph — will ride on the “Donate Life” float.

According to a LifeCenter Northwest news release, the float is part of a national initiative, organized by the Los Angeles-based OneLegacy, to help share the power of organ, eye and tissue donation — and each year LifeCenter Northwest chooses one donor from its four-state service area to honor on it.

The floragraphs are made using dried flowers, spices, seeds and other organic materials. They’re mostly completed by craftspeople in Pasadena before being sent to the donors’ families to fill in the eyebrows.

The Shepherds did so at an event held Nov. 12 at Benefis Health System in Great Falls, where Julie was flown from St. Peter’s Health in Helena before passing away.

As the family completed Julie’s eyebrows before cameras and a crowd, Derrek realized the material they were using was ground coffee.

“Which is funny, because Julie was a big coffee drinker,” Derrek said.

Julie was also an athlete in her junior year at Helena High School at the time of her death. There she played softball and was a state record holder in powerlifting despite weighing only 122 pounds. She also loved being out in nature “whenever she could,” swimming in lakes …

“[And] shopping, of course,” Derrek said.

Following his daughter’s organ donations, Derrek said the entire family also became organ donors. At LifeCenter Northwest’s request, Derrek has also spoken at various events to encourage others to do the same.

“It’s a terrible situation and nothing’s going to take that away,” he said. “But at least there’s some good that came from it. Six people are either alive or doing better than they would have been.”

One of those six people the Shepherds have come to know. Maddy, a competitive high school swimmer from Salt Lake City who suffered from congenital heart disease and had a heart attack at the age of 14, received Julie’s heart. With their consent LifeCenter Northwest put the two families in touch, and arranged for Maddy and her parents to attend the Nov. 12 event in Great Falls. The Shepherds previously had visited Maddy and her family in Utah.

What was “crazy,” he added, was learning that Maddy never really liked ice cream before the heart transplant and now loves it.

“That was a big treat Julia would always get,” Derrek said.

The Shepherds will attend the Rose Parade as guests of LifeCenter Northwest, which also holds a dinner and other events for families such as theirs and for living organ, eye and tissue donors and recipients.

Once he got involved with organ donations, Derrek said he was amazed to learn that less than 1% of people are actually able to donate any of their organs, a factor that energizes his desire to spread the word.

“Just the circumstances have to be so perfect, for lack of a better word,” he said. “So the more people that you sign up to be organ donors, the better the chances are they’ll have somebody that can actually do it.”

Most people know they can elect to be an organ donor when getting or renewing a driver’s license. If they’re in between, Derrek said they can register with LifeCenter Northwest “because they’re the ones who will show up to try and find matches and get everything organized.”

“You never want to think about your own death, but then when you see it up close and you’re like, wow, this could happen to anybody [and] you just don’t know,” he said. “You see the good that comes out of it.”

With the passage of time Derrek said he still hears about the impact Julie had on the lives of others she touched. One of the first such occasions happened at her funeral.

“She worked at Park Avenue Bakery [in Helena],” he explained. “And after she passed, we found out that there was a young woman who’s nonverbal autistic, and she used to come into the bakery just to see Julie. Because Julie would talk to her, and compliment her clothes, and stuff like that.”