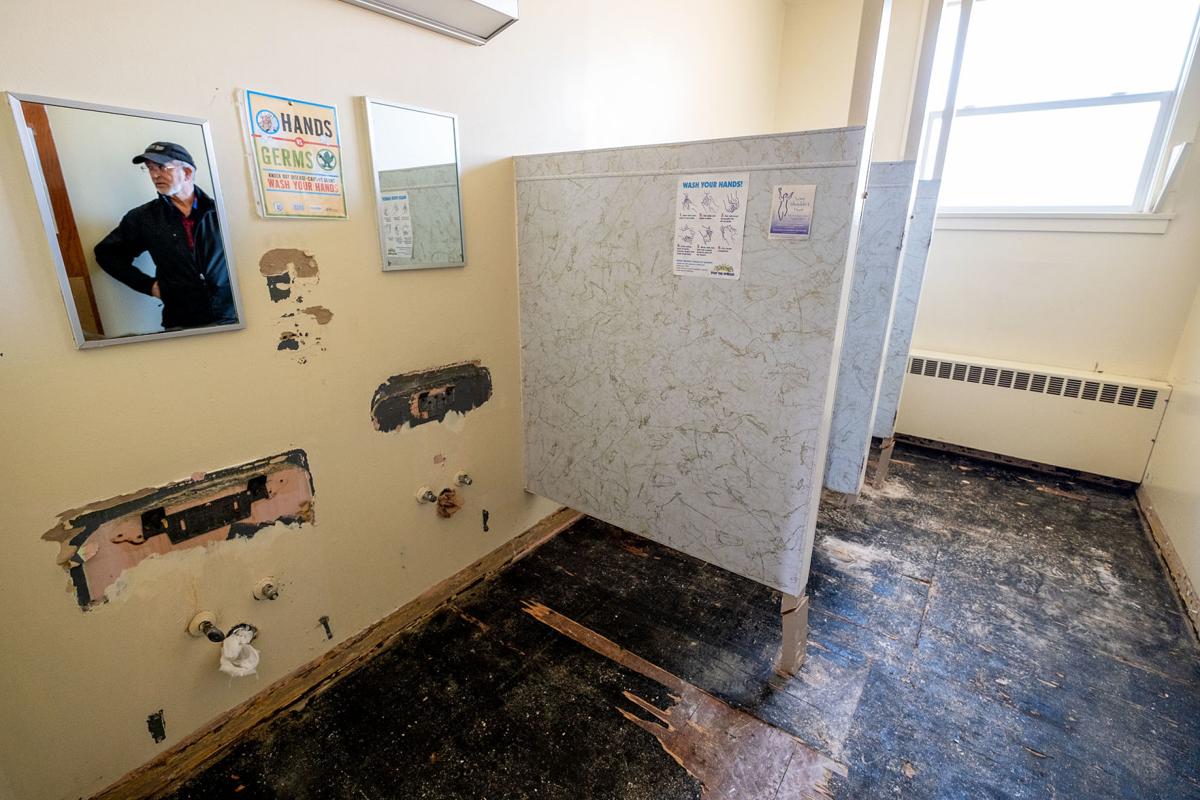 Gary Carlson of Clancy Old Red Schoolhouse Foundation stands  March 5 in one of the two public restrooms under renovation inside the building. 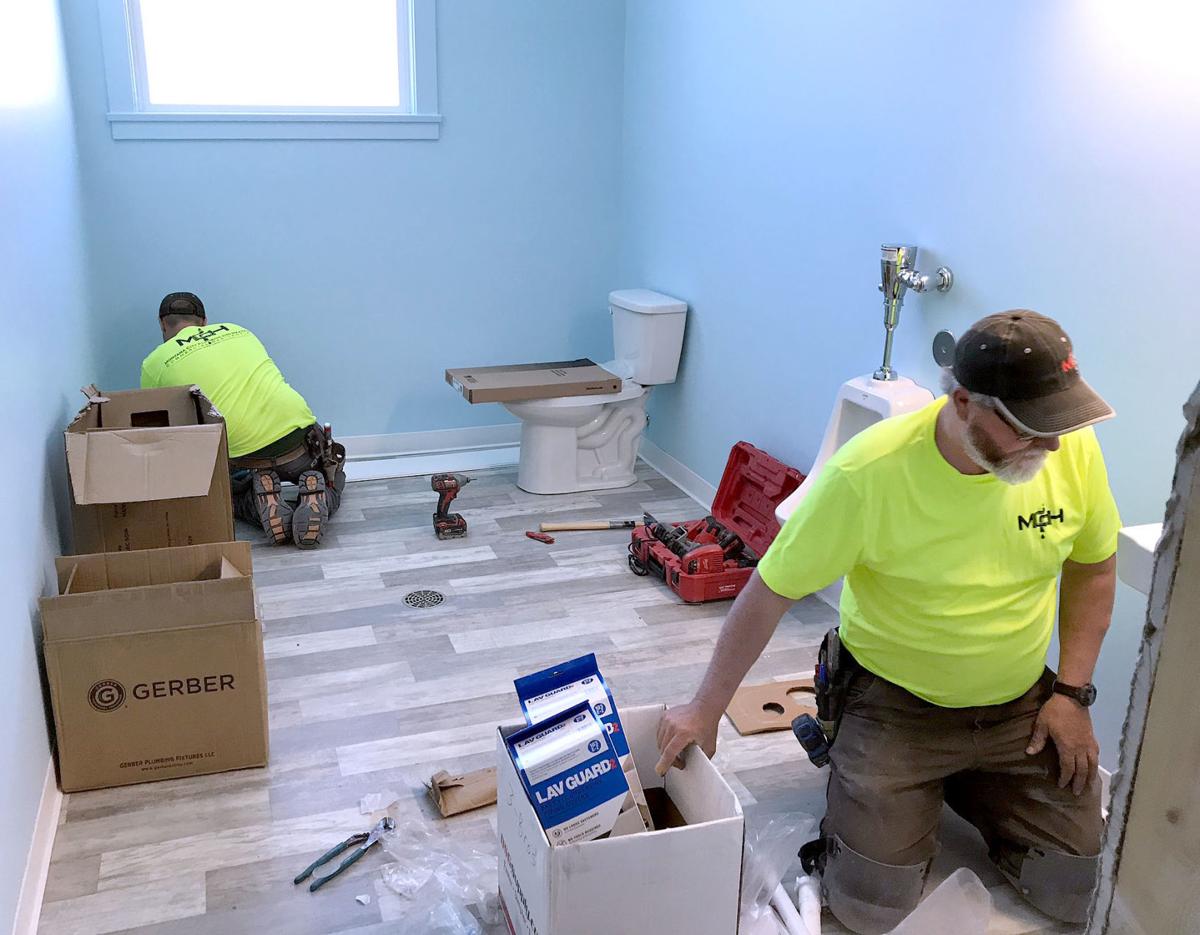 Montana City Plumbing employees Luke Jones, left, and Mike Hedden, right, work on one of the two public restrooms under renovation inside the Clancy Old Red Schoolhouse on April 29.

Gary Carlson of Clancy Old Red Schoolhouse Foundation stands  March 5 in one of the two public restrooms under renovation inside the building.

Montana City Plumbing employees Luke Jones, left, and Mike Hedden, right, work on one of the two public restrooms under renovation inside the Clancy Old Red Schoolhouse on April 29.

The nonprofit foundation was established in 2011 “to raise funds for the preservation, maintenance, beautification and operation” of the historic building, according to its mission statement. Since then it’s methodically and patiently undertaken projects intended to shore up the facility, which opened in 1898, was expanded in the 1950s and currently houses the Jefferson County Museum, the Clancy Library, a Jefferson County Health Department satellite office and a community meeting room that’s used hundreds of times a year.

According to Gary Carlson, the Foundation’s president, the nonprofit’s contributions towards these projects have totalled about $30,000 — all of it “nonpublic” — sourced funds, he noted — through 2019. Prior projects have included replacing gutters, windows and the museum’s front steps; adding handicap accessibility; landscaping to improve drainage; and increasing ceiling insulation in an older part of the building.

Carlson said planning for the remodel began in January 2019. In addition to refreshing the decades-old restrooms, the then-estimated $25,000 project’s goal was to make them compliant with the Americans with Disabilities Act. As part of its fundraising, the Foundation in September 2019 applied for a grant from Helena-based Treacy Foundation, which had contributed $10,000 toward installing windows in 2012. This time it again awarded $10,000 -- with the stipulation that the grant wouldn’t be disbursed unless the remaining $15,000 was raised from other sources. In-kind contributions from contractors include fixtures from Dakota Supply Group, initial bathroom concept drawings for community promotions from Golden Eagle Construction and project engineering and planning from Montana City Plumbing, Carlson said.

Carlson and the six other Foundation board members put the word out and succeeded in fulfilling the Treacy Foundation’s requirement. Among nonprofits, the local Ash Grove Foundation contributed $7,500; the Friends of the Jefferson County Museum and Friends of Clancy Library gave $500 and $200, respectively; and the Elkhorn Community Foundation awarded a $500 grant. In addition, seven local businesses put in about $3,500 and 35 individuals gave about $7,500. All told, almost $30,000 was raised from community sources. In addition, the Jefferson County Board of Commissioners have allocated $10,000.

Carlson credits “a big affinity to this building” as to why the community has shown so much support for it over the years.

“Families for generations went through this particular building,” he said. “And I think the other part is, because so much of the support came from people locally, if you will, is because of the affinity to the community center, the building itself, the value to the community.”

The restrooms remodel began March 2 — with Golden Eagle Construction and Bulkley Electric, both of Helena, and Montana City Plumbing as contractors — and originally was expected to end in early April. A few items have pushed back the project’s completion, including the discovery of mold that had to be abated and supply interruptions caused by COVID-19 restrictions. Carlson estimated that the bulk of the work will be done by May 8. Meanwhile, Carlson said a revised estimate put the project cost upward of about $30,000.

What the Foundation’s next project will be and when it will happen have not yet been determined, though Carlson indicated that a leak in part of the library’s aging stone foundation is a concern — “we’ve got to fix that wall” — along with installing about half a dozen windows.