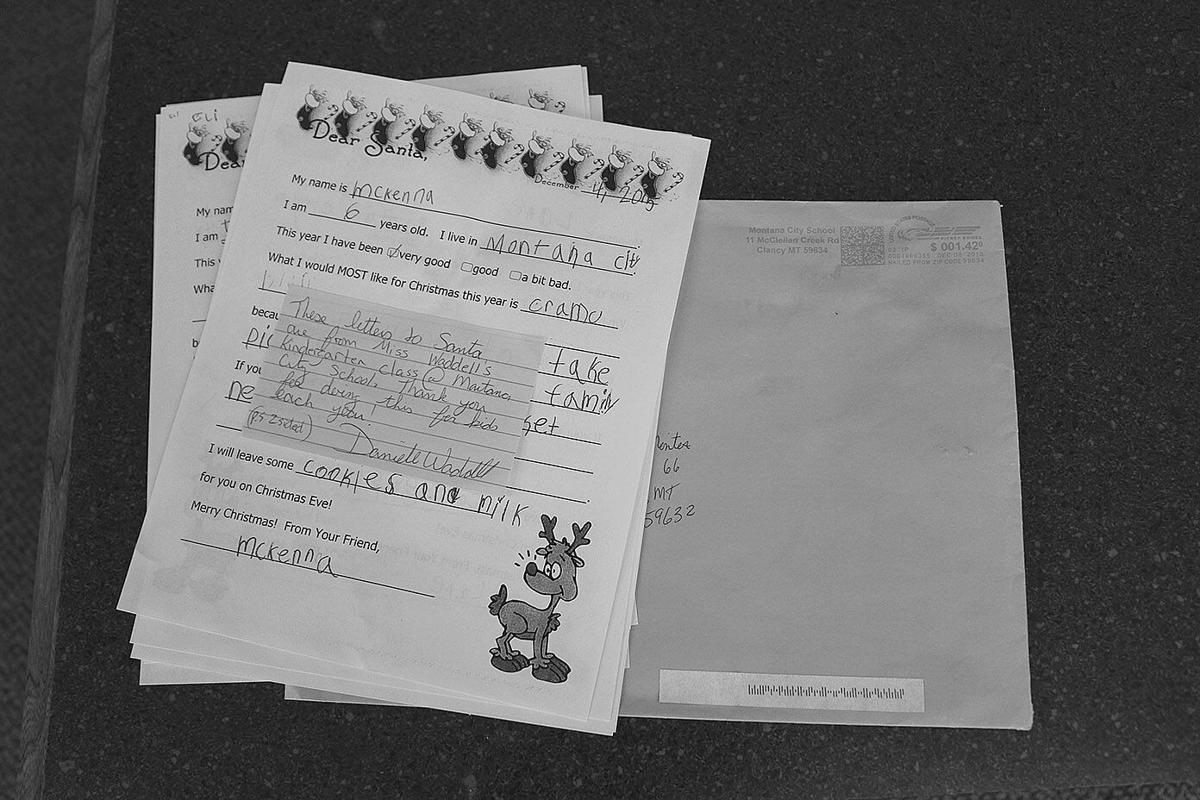 An envelope of Santa letters arrived at The Boulder Monitor five years late. Where they were during those years remains unknown. (Diana McFarland/Boulder Monitor)

An envelope of Santa letters arrived at The Boulder Monitor five years late. Where they were during those years remains unknown. (Diana McFarland/Boulder Monitor)

With reports of mail delays due, in part,  to higher volumes because of COVID-19, the Boulder Monitor staff wasn’t too surprised to receive an envelope full of Santa letters — and seemingly more than a month late.

They were from Danielle Waddell’s kindergarten class at Montana City School.

Each year, the Monitor publishes letters to Santa from local schoolchildren as part of its Christmas issue.

The newspaper staff contacted the school to let Waddell know that they had been received late and that’s why they hadn’t been published in the paper.

“So weird,” said Montana City School Administrative Secretary Jeanne Dorrington in an email, adding that Waddell had left the school a few years ago.

Dorrington wondered what year the envelope was mailed.

Upon closer investigation, the postmark, metered at the school, was dated Dec. 8, 2015 — five years ago. At the bottom of the envelope was a bar code sticker. There was no other information indicating where the envelope had been.

The Boulder Monitor contacted Floyd Wagoner, a spokesperson with the U.S. Postal Service, and sent photos of the envelope.

Wagoner passed the information to a team of postal investigators who determined that the barcode showed the envelope was processed in Salt Lake City on Dec. 8, 2020 — the same day, but five years later.

Wagoner thought that perhaps the date on the postage meter was wrong, but the envelope’s contents indicated that the letters were indeed five years old.

Why the two dates were the same — except for the year — is unknown, said Wagoner.

The Monitor found Waddell through her Facebook page. She was surprised to hear that the letters had just been received. Waddell said she would have given the envelope to the staff at the school.

Dorrington said she meters the mail and the post office picks it up.

Waddell said she was unaware that the letters had never run. She had simply told parents to watch the Monitor for the letters. As to why the envelope passed through Salt Lake City, Waddell had no idea.

“I wish we could know more,” she said.

Wagoner had nothing more to add either.

“Every piece of mail presented to the USPS for processing and delivery is identified by an adhesive barcode placed on the letter’s envelope during processing.  The first time the un-mailed Montana City letter was processed by the USPS was in December 2020. Where the un-mailed letter was before that time is not for the USPS to speculate,” he said.

Meanwhile, it’s not known if Waddell’s kindergarteners got their Christmas wishes fulfilled that year. McKenna, 6, wanted a camera to take photos of her family. Gavin, 6, wanted a new puppy and a LEGO set, while Joey, 5, wanted a trampoline because “I love them.”  All of the 15 students promised to leave Santa cookies on Christmas Eve.