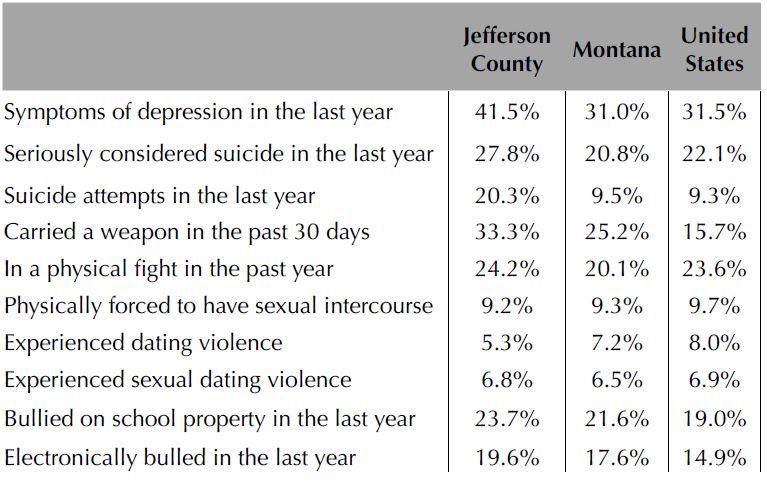 Following the completion of the Jefferson County Community Health Assessment, the county’s Public Health Department anticipates a November start date for the next step: the formation of a Community Health Improvement Plan.

“The assessment really validated some of what we knew and felt,” said Department Supervisor Karen Wandel.

According to the assessment, the top health-related concerns in Jefferson County are access to health care, particularly mental health care; mental and behavioural health issues in youth and adults; and access to affordable health insurance. (See Figure 1.)

“Without a hospital and with limited clinical services in the county, access to care ranked as a key concern among survey respondents,” the assessment states. “Stakeholders were asked to rank access to different types of care that are most concerning. Access to mental health care was the top concern, with no providers in Boulder and few in Whitehall and Montana City. Ranked next highest were access to transportation, specialty care and support for disabled and aging individuals.” (See Figure 2.)

“Mental health is a serious concern among high school students in Jefferson County,” the assessment states, and then summarizes findings from the Centers for Disease Control and Prevention’s 2017 Youth Risk Behavior Survey: “One in four report bullying on school property in the last year and one in five report being electronically bullied, slightly more than youth surveyed in Montana and the U.S. as a whole. Youth in Jefferson County were also more likely to report symptoms of depression. They are also more than twice as likely to report attempting suicide in the last year.” (See Figure 3.)

In the works since January, the Community Health Assessment was released Aug. 24. Wandel said September was spent distributing print and electronic copies to departments, cities and institutions countywide, while much of October was spent “knee deep in flu shots.”

“I anticipate the next steps will take place in November when things calm down a bit for us,” she said.

Funding for the Community Health Assessment -- 2012 was the last and first time the county compiled one -- was granted last August by DPHHS. A cross-county steering committee was formed and included Katie Loveland of Loveland Consulting in Helena, who was hired to assemble the document.

It also measures the perceptions and opinions of 101 local stakeholders who completed an online survey in which they were asked to rank their top four health concerns in Jefferson County and their perception of the quality of services available here.

Those who responded to the survey represented education, local government, medicine, mental health, community and faith groups, first responders, businesses and substance abuse, “with more than one-third working in each of the three primary population centers,” the assessment states.