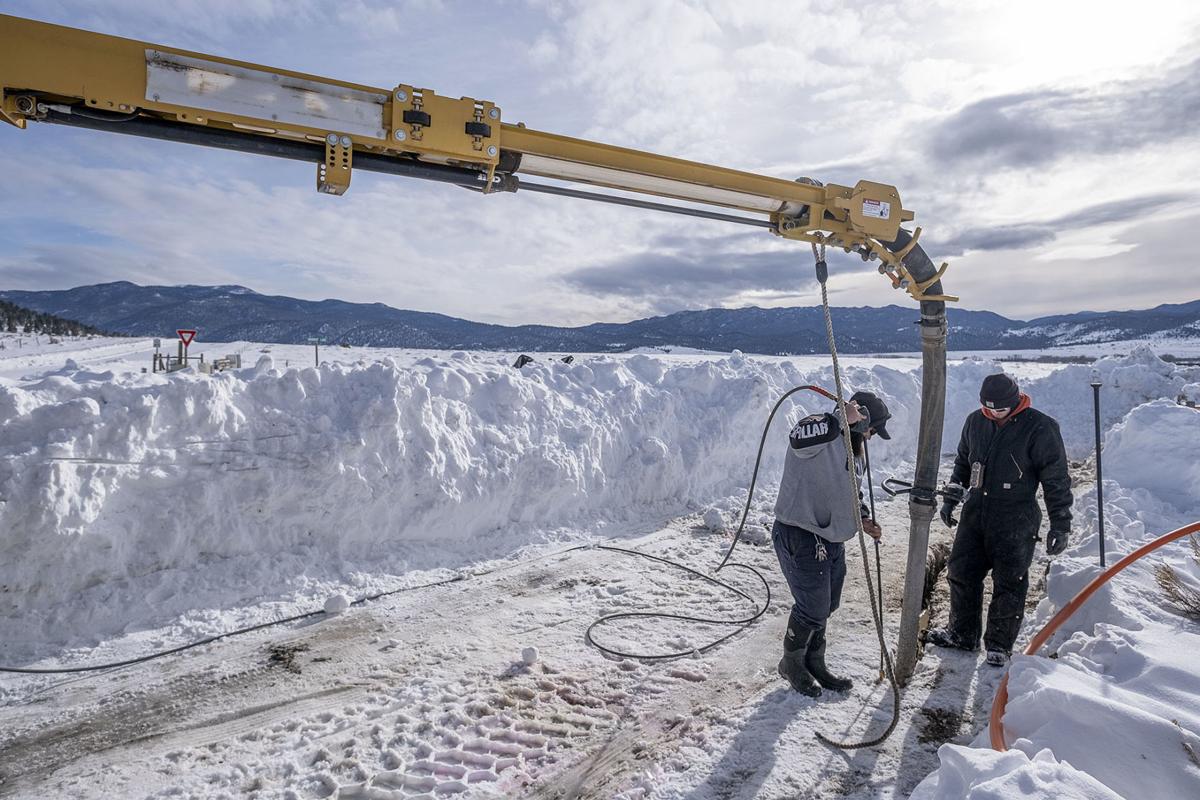 Montana Internet employees John Lancaster, left, and Ryder Jackson dig a path for fiber optic cable near the intersection of Muskrat Lane and Upper Valley Road in Boulder on March 8, 2019. 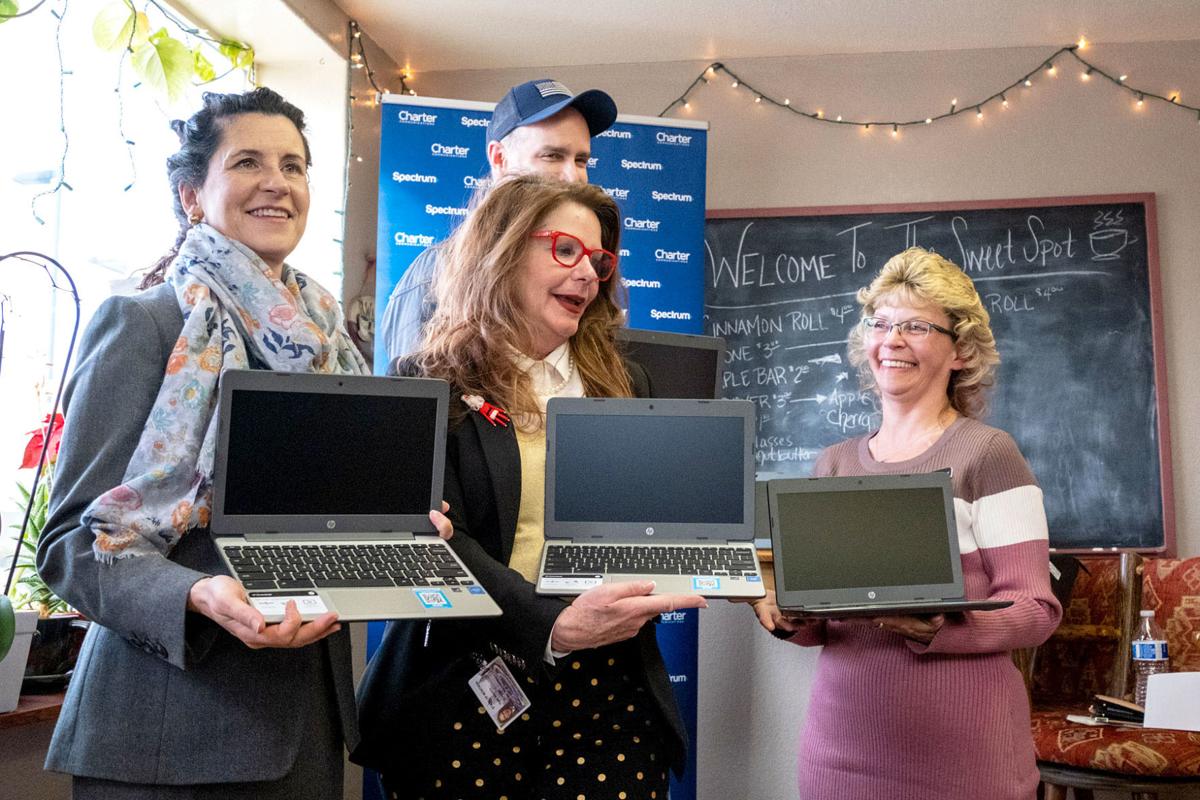 Librarian Jodi Smiley of Boulder Community Library, right, joins, from left, Mary Roehr of Charter Communications, Montana Superintendent of Public Instruction Elsie Arntzen and Jefferson County Commissioner Cory Kirsch at a press event at The Sweet Spot in Boulder Dec. 17, 2019. They posed for photos with some of the 25 HP Chromebooks Charter donated to the library.

Montana Internet employees John Lancaster, left, and Ryder Jackson dig a path for fiber optic cable near the intersection of Muskrat Lane and Upper Valley Road in Boulder on March 8, 2019.

Librarian Jodi Smiley of Boulder Community Library, right, joins, from left, Mary Roehr of Charter Communications, Montana Superintendent of Public Instruction Elsie Arntzen and Jefferson County Commissioner Cory Kirsch at a press event at The Sweet Spot in Boulder Dec. 17, 2019. They posed for photos with some of the 25 HP Chromebooks Charter donated to the library.

A year ago, much of Jefferson County was a broadband backwater, with pokey, funky Internet service that seemed to sputter as often as it sped.

Now, Kristeana Sherwood’s Internet in Basin “never cuts out. It’s enough for six devices to stream, and it doesn’t lag.” Switching to CenturyLink’s high-speed DSL service from Blackfoot in December, she says, made “a world of difference.”

And Dawn Smartnick saw a “huge difference in upload time” for customers purchasing her photographs online after she moved to Spectrum’s cable-based service. “I couldn’t afford to operate my business at 1 Mbps,” she says; now, she gets ten times that.

Credit what appears to be a burgeoning Internet performance war between three providers that have been building out their infrastructure and improving offerings in Boulder and other Jefferson County communities.

Montana Internet, a small Helena-based company, has run fiber cable to Boulder, creating a new backbone for expansion in Montana City, Clancy and Jefferson City. That new infrastructure has allowed it to offer direct fiber connections to businesses in downtown Boulder – and to expand the capacity of its wireless tower serving the city.

At the same time — and possibly in response to Montana Internet’s investment — national cable provider Charter Communications has made hardware and software upgrades to its existing Spectrum network that allow it to offer high-speed Internet in Boulder for the first time. CenturyLink Communications says it has been upgrading its DSL service since 2017, putting fiber in Basin, Boulder, and Clancy; it now offers service at speeds of 20 Mbps and 40 Mpbs.

All of which may represent a mostly unintended but fortuitous outcome for the Boulder Development Fund, which in 2018 earmarked $50,000 of its $500,000 state grant to a contract with Montana Internet that, in effect, subsidized the extension of its fiber optic line to Boulder. The fund did not issue a request for proposals at the time, says Mayor Rusty Giulio, because “Montana Internet was the only one that would even talk to us.”

The Development Fund grant, says Montana Internet CEO Josh Romandia, “changed the economics.” The cost of installing fiber optic cable is high – an average of $27,000 per mile, according to a 2017 U.S. Department of Transportation study. Romandia wouldn’t disclose his company’s actual expense – but in general, it’s difficult to justify high capital investment in rural areas with low population density.

The numbers worked in part because Giulio and Buster Bullock donated the services of their respective excavating companies to dig 2.5 miles of trench connecting an existing fiber trunk line on Upper Valley Road to Montana Internet’s tower on Capital Hill, and to downtown Boulder.

Montana Internet has since made direct 1 gigabyte fiber connections to Boulder’s city hall and water treatment plant, as well as to Jefferson High School; it’s giving the school free service for now in hopes of a contract later. Romandia says the company expects to start serving businesses on the east side of Boulder’s Main Street with fiber later this year.

Meantime, the new fiber line has allowed Montana Internet to improve the capacity of its radio tower on Capital Hill, which provides wireless Internet to residential customers. Before that upgrade, the company’s $55-a-month residential service poked along at 2 Mbps; now it offers 8 Mpbs for the same price, with higher speeds available.

And its subsidized infrastructure investment appeared to spur competition. Last September, at an event at The Sweet Spot café, Charter Communications’ Spectrum announced the launch of its high-speed Internet service for Boulder customers. Its advertised base speed of 100 Mbps costs $49.99 a month with a one-year contract; speeds and prices go up from there.

“We’re continually looking for ways to expand, factors include distance to existing network, and feasibility,” says Bret Picciolio, Charter Communications’ senior director of communications. “Boulder is one of many smaller rural towns where we’ve expanded” recently. Townsend, in Broadwater County, is another.

Montana Internet’s investment “absolutely energized the other providers,” says Tom Harrington, co-manager of the Jefferson Local Development Corporation. He said county and city officials had met with Internet providers in the past, but had been told that Boulder didn’t have the population base to justify investment. With Montana Internet’s entry, he said, “we’ve seen Century Link and others upping their game.”

The county’s Internet boom reflects a nationwide effort to bring high-speed Internet to more rural communities. The Pew Research Center reported last year that 63% of rural Americans reported having a broadband connection at home, up from 35% in 2007. The gap between rural residents and Americans overall narrowed to 12 percentage points, from 16, over that period.

The Federal Communications Commission’s 2017 study, “Mapping Broadband Health in America,” reported that 52.4% of Jefferson County’s population had access to fixed broadband at the time — higher than most Montana counties but lower than in many other rural areas across the nation. A 2019 FCC survey appeared to show that broadband penetration in the county had increased to 80.8%.

Increases like that have been a function, in part, of the FCC’s Connect America Funds, which have provided subsidies to phone companies that offer broadband in rural markets. On January 30, the Commission announced a new effort, the Rural Digital Opportunity Fund, which will direct up to $20.4 billion in financing over ten years to telecom providers in unserved rural communities.

Jefferson County won’t see any of that money – but its upgrade seems likely to continue. Montana Internet hopes to begin digging new cable trenches in Boulder this month. It has brought fiber connections to homes on Crossfire Drive and the South Hills neighborhood near Montana City – though South Hills’ rocky terrain makes construction difficult.

For now, Boulder is literally the end of the line for the company’s fiber investment. “We don’t have plans to go south” to Basin and less populated areas of the Boulder Valley, Romandia says. But “it’s a long-term play for us. We see the next 25 years as important, so as much as we can stay in the fiber game, we’ll do it.”

All that await the deployment of 25 HP Chromebook laptop computers at Boulder Community Library are inventory tags.