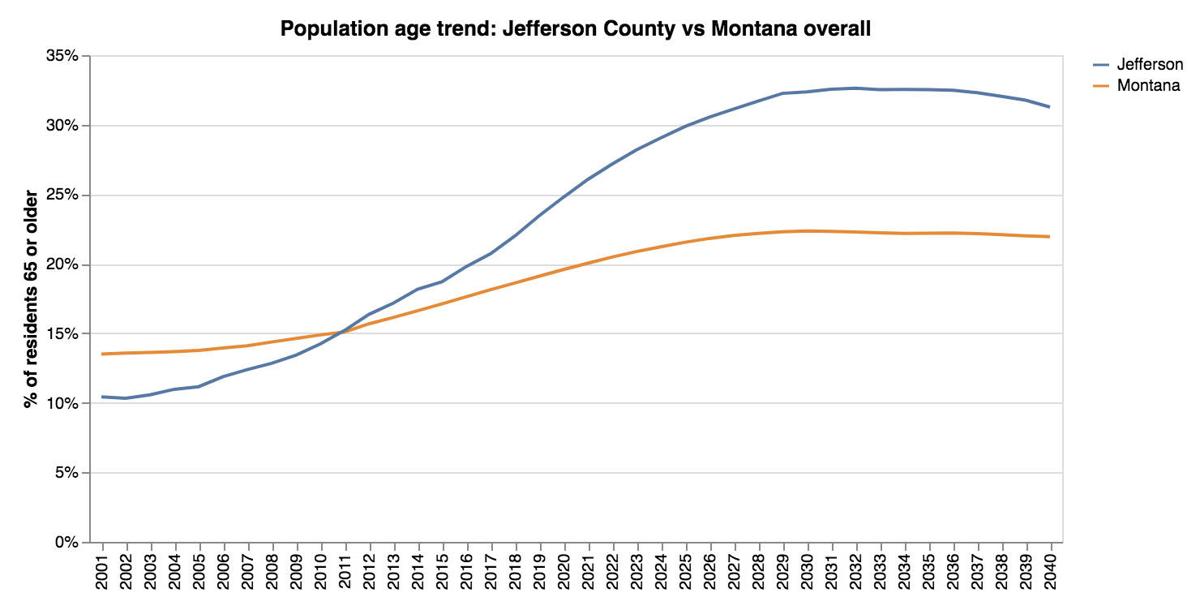 People have been parsing the human lifespan into a taxonomy of ages forever. Aristotle proposed three categories: youthful, prime of life, and elderly. Two thousand years later, Shakespeare’s Seven Ages of Man carved human chronology into seven slices, with the body’s final frailty circling back to the original oblivion of infancy. And in the 1980s, British historian Peter Laslett proposed a revised map of three ages, with a caveat for the third: it could be a time of post-retirement fulfillment and achievement, or it could collapse, a la Shakespeare, into dependence and decrepitude.

The character of any individual’s third age hinges on some key factors, including health, wealth, community, and the government policies and cultural customs that influence them. Navigating those factors requires independence, assistance, access, and education. The latter, especially, is lacking. Missoula Aging Services Executive Director Susan Kohler told a room full of Montana journalists in November that one of the biggest impediments to a fulfilling third age is “lack of preparedness.”

Already, Montana is the oldest state west of the Mississippi, according to median age statistics from the U.S. Census Bureau. With half the state’s population 40 or older, we’re the 9th oldest in the nation, out-grayed only by Florida, Maine, and a few other eastern states.

Peak age is yet to come, according to demographic projections produced for the state Department of Commerce by consulting firm REMI. As of 2017, the baseline year used by those projections, 18% of Montanans were 65 or older, up from 14% in 2001. The figure is expected to climb to 22% by 2030 then plateau through 2040 as boomers reach the end of their lives.

Different parts of the state, however, are on very different trajectories. Sparsely populated rural counties tend to have higher percentages of seniors and are, in many cases, on track to become even more disproportionately older. Petroleum County’s 520 residents make it the lowest-population county in Montana, and by 2030, 37% of county residents will be past retirement age, up from 23% in 2017. For Teton County, northwest of Great Falls, the 2030 figure is projected to be 27%, up from 22%.

Population centers like the Billings area tend to trend closer to the state as a whole, age-wise, though college towns Missoula and Bozeman are substantially younger than other urban areas, and are expected to stay that way. Seniors 65 and over accounted for 16% of the population of Yellowstone County (including Billings) and 12% of the population of Gallatin County (including Bozeman) in 2017. Those figures are projected to rise to 21% and 15%, respectively, by 2030.

Why the state is aging

Driving those trends are three key demographic forces: birth, death, and migration. Higher birth rates pull areas younger while longer lifespans populate communities with more elders. Migration, in turn, tends to siphon young, mobile residents away from some places and toward others.

Montana’s population is skewing older, in part, as the oversized generation of baby boomers born in the aftermath of World War II, between 1946 to 1964, reaches retirement age. According to the U.S. Census Bureau, longer life expectancies and declining birth rates are also a factor that’s aging American communities across the nation. While average life expectancy in the U.S. was 68.2 in 1950, according to the National Center for Health Statistics, it was a decade longer, 78.6, in 2017.

In Montana, the median age of death is now 75 for men and 82 for women, according to the state Department of Public Health and Human Services. Montana’s Native communities are younger in part because death typically comes much earlier for American Indian Montanans, with DPHHS reporting a median age of death at 60 for Native men and 63 for Native women.

Counties with larger Native populations also tend to have higher birth rates, which means more young residents. For example, Roosevelt County, which is 57% Native, saw a rate of 22.3 births per 1,000 residents annually between 2010 and 2018, according to a Montana Free Press analysis of census data. The equivalent figure for Yellowstone County, in comparison, was 13.2.

Migration rounds out the picture. While Montana attracts some older migrants looking for a change of scenery in retirement, migration is on the balance a youthening force for destination communities, because young people constitute the lion’s share of movers. According to census estimates based on surveys conducted between 2014 and 2018, 58% of Montana’s new arrivals to Montana are under the age of 30, versus just 11% who are 60 or older.

As such, migration patterns also contribute to the graying of places where there aren’t enough new arrivals to balance the number of young people moving away for school or work, creating the “brain drain” dynamic that has posed a challenge for swaths of rural Montana for decades.

What it means for Montana

At a community level, an older population means more demand for health care services. A 2012 study by economists at Montana State University, for example, estimated that the state’s aging demographics would necessitate increased state Medicaid spending. And with large portions of the health care system funded by the state-administered Medicaid program, aging creates public policy questions at the state government level as well.

At the same time, an aging population is predicted to diminish the proportion of state’s residents who are in the workforce and available to staff nursing jobs, not to mention other businesses. Montana’s working-age population of residents between the ages of 15 and 64 was 64% of the populace as of 2017. While the total number of working-age Montanans is projected to increase with population growth, the working-age share of the population is expected to decrease slightly, to 60%, by 2030.

That study also concluded that the aging of Montana will produce a modest shift in state revenue sources away from income taxes, which are highest for workers in the peak of their careers, and toward property taxes, which are higher for older adults, including retirees, who tend to live in more valuable homes than younger residents.

What it means for you

It affects churches and nonprofits and all manner of governmental safety nets, whose funding structures are already strained.

It affects the aging and the aged, many of whom face financial insecurity and isolation. And it affects the generations behind them, who are increasingly called on to care for elderly parents, even as many raise their own children, who may one day help care for them.

The average American life expectancy rose by three decades over the 20th century, contributing to the aging of America and suggesting the need for what a 2018 Stanford Center on Longevity initiative calls a “new map of life” that reimagines education, work, retirement, intergenerational relationships, financial planning and health care to support a society in which more of us than ever are living in Laslett’s third age.

Montana is on the forefront of that trend, giving residents an opportunity to, as Center on Longevity Director Laura Carstensen wrote in the Washington Post, “redesign how we live.”

Montana is the oldest state west of the Mississippi, and demographic projections show the state growing collectively older as more Montanans e…