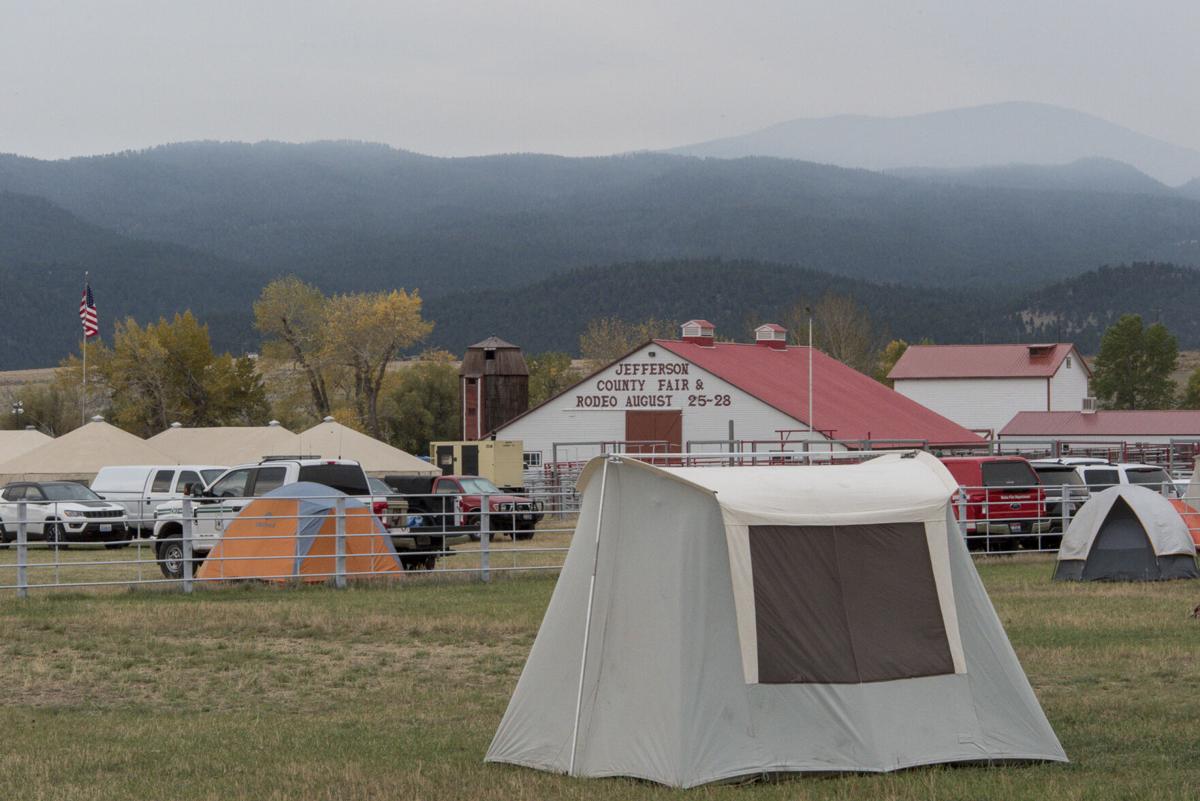 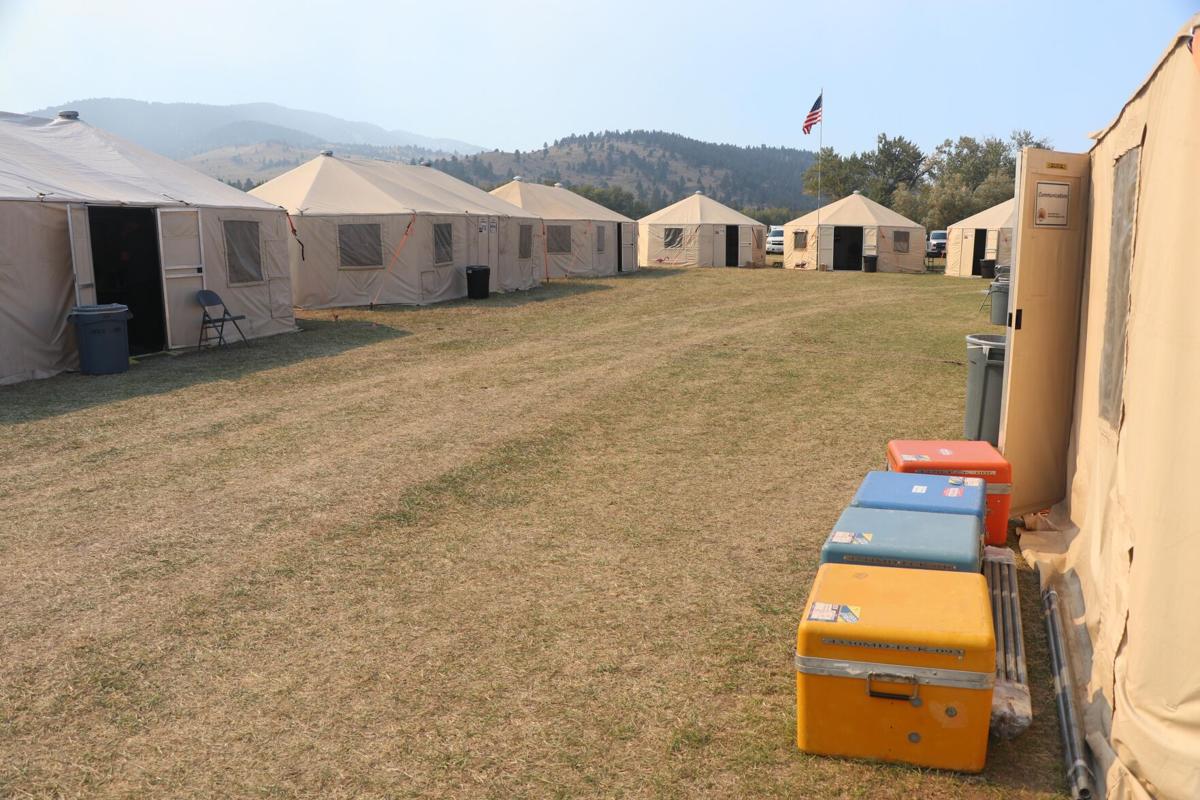 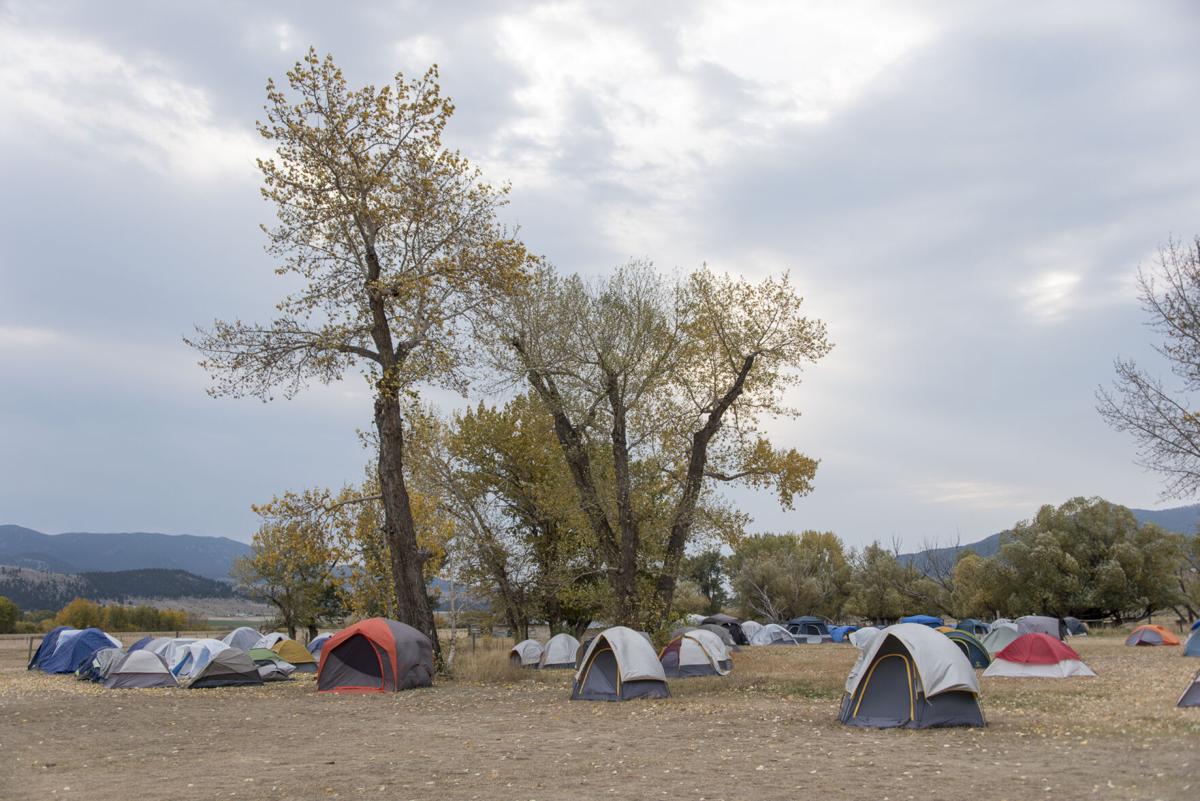 Cold temperatures including freezing overnight lows, as well as a dusting of snow early this week, considerably reduced the activity of the Haystack Fire south of Boulder, which stood at 24,011 acres and 88% contained on Monday.

According to an Oct. 7 update from the Butte Ranger District of the Beaverhead-Deerlodge National Forest, "more of the fire perimeter moves into a patrol and monitor status," including the northeastern side of the fire nearest to Boulder. Some crews continued to work on increasing containment of the fire, which started on July 30 and smoldered for weeks before exploding and racing toward Boulder last month, while others were repairing areas damaged by the construction of fire lines, according to the district. An Oct. 9 update from the district said that crews were raking surface debris and topsoil back across fire lines to repair the ground.

The district is using the Bull Mountain Rural Volunteer Fire Department's station south of Boulder as an incident command, and crews are staying in hotels in Butte and Helena, according to Incident Commander Shane Martin, the assistant fire management officer for the district.

An area closure remains in place from Whitetail Road on the east to Interstate 15 on the west, bounded by Whitetail Reservoir to the south and the upper reaches of Galena Gulch to the north. The Bureau of Land Management has reopened the Galena Gulch Campground along I-15 between Boulder and Basin.

On Monday, as snow fell across southwest Montana and Jefferson County, the district stated that "the snow is greatly impacting the fires across our forest by dampening and diminishing fire activity," but crews would continue to work the Haystack and other fires because the snowfall wasn't expected to be a "season-ending event."

About 97 personnel were working the Haystack Fire by Sunday, down from more than 450 people from mid-September through early October. The drastic decrease is noticeable not just in updates from agencies managing the fire, but also at the Jefferson County fairground south of Boulder, which for two weeks served as the incident command post for Great Basin Type-2 Incident Management Team 4, which oversaw firefighting efforts from Sept. 22 through Oct. 4. The Great Basin team arrived in response to the fire’s dramatic expansion beginning Sept. 18, when winds up to 60 mph propelled flames toward homes and property south of Boulder, and air tankers dropping fire retardant maneuvered through the landscape. The number of personnel fighting the fire hovered around 460 for much of the team's tenure in Boulder.

As the team moved in, the fairground, technically named the Jefferson County Recreation Park, transformed overnight from a quiet campus of empty fields and buildings to a bustling tent city that supported a coordinated firefighting effort on all sides of the rapidly growing fire.

"County fairgrounds work great, schools work great," Carrie Bilbao, a public information officer with the Great Basin team, said on Oct. 4, adding that, at some fires, the incident command post is spread across multiple facilities because no one facility can house the entire operation. At the Haystack Fire, though, the whole thing fit in—and filled—the fairground.

Sandwiched between state Highway 69 and the rodeo area, a horseshoe of tan oval-footprint tents housed what Bilbao called the "overhead" of the fire—the leaders who coordinated firefighting and everything that supported it, from mapping and weather data collection to accounting and payroll. Working and camping throughout the rest of the fairground, personnel carried out those functions, providing all the necessary support for firefighters at "spike camps" around the fire.

Based on the federal government's standardized Incident Command System, the incident command post, or ICP, for the Haystack Fire housed the incident commander—Tim Roide—as well as officers directly under him who oversaw safety, public information and liaisons with other agencies involved in the fire. Also in the array of tan tents, which featured indoor and outdoor conference spaces, were the operations, planning, logistics, and finance and administration sections, all organized as coequal branches of the incident command system operating under Roide.

Each section was divided into branches with specific purviews, which were then divided into units addressing specific duties within those branches. Individual positions, branches and units were staffed as necessary based on the needs of the incident.

"You can just add parts and pieces where you need them, when you need them," Logistics Section Chief Tyler Brown, 46, said of the Incident Command System. "It really is kind of location dependent."

The operations section was comprised of the personnel and resources fighting the fire, including divisions of ground-based crews—the Haystack Fire was broken into three divisions—and aerial resources. ("Fighting fire with fire: Crews burn lines around Haystack Fire," The Monitor, Oct. 6)

But those operations on the fire line and above the fire were made possible by the three other sections: planning, logistics, and finance and administration.

Outside a tent housing the ground support unit of the support branch of the logistics section, mechanic J.D. Harding , 35, explained that "pretty much anything that breaks down ... I get to look at."

Ground support, he said, is "keeping stuff supplied and getting stuff brought back," whether that meant repairing a brush truck or driving a rental car full of meals to a spike camp. He said he worked on "a lot of ATVs, a lot of pickups, water tenders," and that the job "keeps life interesting," whether he was fixing heavy equipment on the fire line or inspecting a departing water tender at incident command to make sure it was safe to head home on the interstate.

"We want the stuff in top operating condition when it comes here," he said, "and if it breaks down here we'll fix it."

Over at the supply unit, also within the logistic section's support branch and directly across from ground support, Supply Unit Leader Larry Garahana was overseeing workers packing up for demobilization on Oct. 4. His unit, he said, was responsible for ordering, receiving and coordinating the distribution of any and all supplies—"from Q-tips to a breast pump"—that were needed in the incident command and by firefighters out on the fire.

He said that "certain things we order right of the bat" for a type-2 fire like the Haystack Fire, and reorders and special orders occurred as needed. Garahana oversaw a flow of goods into the incident command that arrived in a caravan of semi trucks each carrying about a half-million dollars of products, he said. Some of the usual supplies, like crowd fencing for incident command and sleeping bags for personnel, came from a regional federal supply cache, while more consumable supplies like batteries and antifreeze were often purchased locally.

A mostly office-bound geologist in Utah the rest of the year, Garahana said that fire season 'is, by far, the highlight of the year," compared to his relatively "sterile" off-season desk job.

In the finance and administration tent at the end of the tent horseshoe nearest the highway, Finance Section Chief trainee Kayla Davin explained that "everyone's here to support the boots on the ground." In her section, workers tracked personnel hours and pay, and worked to begin calculating the overall cost of the fire, based on historical data and actual contractor rates, some of which are billed after the fire. The section also managed any land-use agreements necessary to rent land for the incident command.

"We interact with every resource that's on the fire," Davin, 29, said.

Across the horseshoe in the planning section tent, Planning Section Chief Tony Piscopo had just finished the daily meeting of the command and general staff. The planning section, he said, "builds the operational plan, or 'incident action plan,'" and also manages mapping and geographic information systems, or GIS.

Piscopo, 49, said that each day began with a "daily operational briefing" at 7 a.m., followed by the meeting of command and general staff at 9 a.m. Then, throughout the day, he said, planning staff gathered information to assess how the day's plan was actually performing. There was a tactics meeting at 5 p.m., a planning meeting at 6 p.m., and by 8 p.m. the planning section began compiling the next day's incident action plan, which they presented the next morning. The plans covered operations from 7 a.m. to 9 p.m. each day, he said.

"It's a lot and it keeps everybody busy," he said. "That's why you need the little city to keep it all going."

Brown, the logistics section chief, said it was his job to tie each part of that little city together.

"That's the fun of it, is trying to figure out how to make it all come together," he joked in the logistics section tent, noting that his section housed the communications, medical, food, supply, facilities and ground support units. "Nobody knows what logistics does until we don't do it."

But above Brown, overseeing all the sections and the whole of the firefighting operation, were Roide—the incident commander—and 43-year-old Steve Shaw, the team's deputy incident commander, who has a shot at taking over the lead role when Roide retires after this season, which ended after the Haystack Fire. The key to running a successful firefighting operation, Shaw said, was to "hire good people, have good people on your team."

Bilbao, the public information officer, said that "what's great about these large teams is that you'll have people from all over the country filling these positions," and Roide said that, "because we spend so much time working together in very close quarters," people's personalities were as important as their qualifications.

But a day later, on Oct. 5, all those people were gone and headed home for the season, and the fairground was empty again.