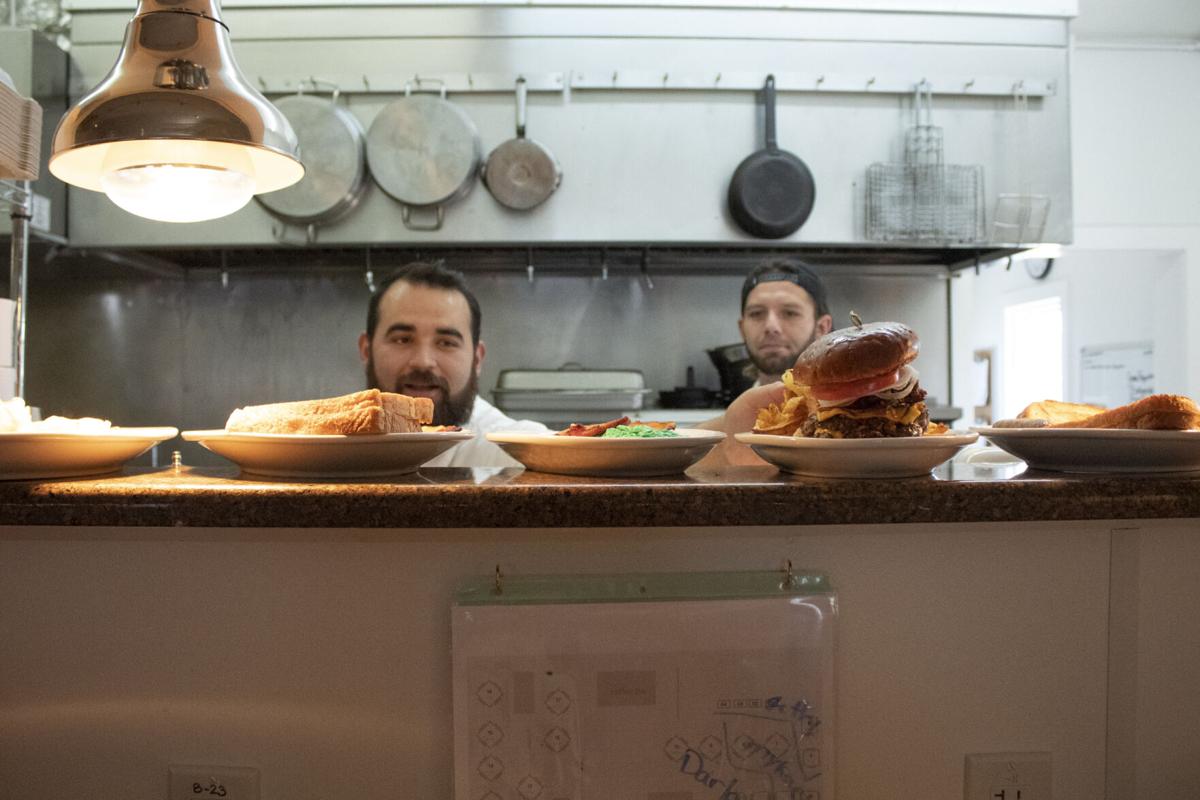 The Hardware Cafe chef, Chris Abrego (left) and Evan Eastep serve up food for the lunch rush on Sept. 3. 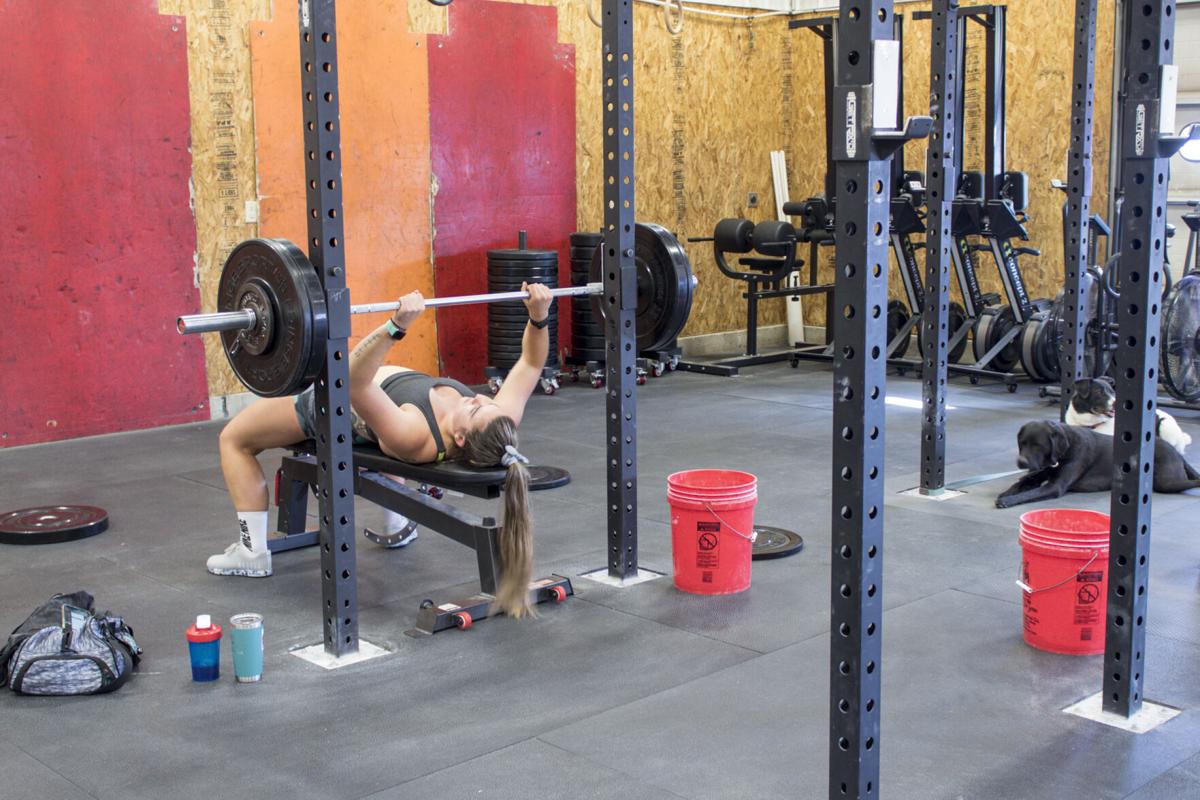 FireTower Athletics CrossFit instructor Emily Blaylock works out between classes on Sept. 2 under the careful supervision of her dogs, Raven and Stella.

The Hardware Cafe chef, Chris Abrego (left) and Evan Eastep serve up food for the lunch rush on Sept. 3.

FireTower Athletics CrossFit instructor Emily Blaylock works out between classes on Sept. 2 under the careful supervision of her dogs, Raven and Stella.

A cherished Montana City restaurant has reopened, and now there’s a new place in town to burn off those calories, too.

FireTower Athletics opened on June 15, and, under new owners, The Hardware Cafe opened for the first time in two years on Sept. 1, and both are settling in well in their new community.

“This new space is a better fit than our old one,” FireTower Athletics owner Jay Mattfeldt said. The gym had to move from its rented space in Helena when the landlord sold the building, he said.

The Montana City building, at 32 Bitterroot Lane, boasts 18-foot ceilings that are more conducive to rope climbing than the former building’s 12-foot ones, and it accommodates a loft for children to hang out while their parents exercise.

Inside, there is plenty of room for the gym’s CrossFit classes, some equipment and two large shelves: one for member shoes and another for the gym’s extensive collection of weights and barbells. While the classes are the gym’s main focus, the facility is open to members 24/7 for those who want a solo workout.

Mattfeldt said the new location is a good fit not only because the building is larger, but also because many of the gym’s members live in Clancy and Montana City. He said that while a couple of Helena-based members voiced concern about the distance, they found it wasn’t much more of a drive than the original location.

“To go to Helena from where we were before, you had to go through four stop lights past Walmart, where here, it’s just straight interstate—so it is further, but it’s only one or two minutes longer.” Mattfeldt said.

The move hasn’t led to a decrease in members, according to Mattfeldt. In fact, he said, he’s seen an increase of three to five new members a week, thanks to people seeing the new location while driving by, and the billboard near fellow Montana City business Discovery KidZone.

“This area is growing pretty fast,” Mattfeldt said. Despite housing small populations relative to Helena, Clancy and Montana City saw increases of 11.4% and 7.5% respectively in the past decade, according to the 2020 Census. Between the two towns, that amounts to 393 new people, making up more than half of Jefferson County’s 679-person increase from 2010 to 2020.

The Hardware Cafe’s manager, Jenna Abrego, said she also feels like there’s room in the community for her business.

“I feel a lot of love from this community,” she said. “I think they’ll be excited for what we bring to the table.”

Abrego and her husband, Chris, came to run the cafe after Jenna Abrego’s father, John Schachtner, bought it. The former owners, Rob and Paula Thomson, closed the cafe in August 2019.

“I called the bank and asked for Rob’s number. He was really excited that someone was interested in buying and reopening it,” Schachtner said.

Jenna Abrego said Rob Thomson has been very involved in the cafe’s reopening and willing to help whenever needed. “I think he really wants to see it succeed.” she said. The business is very much the Abregos’ thing, according to Schachtner, who hopes to see the restaurant stay in the family for years to come.

Chris Abrego, a cook, created the menu and can be found in the kitchen from open to close, while Jenna Abrego does what she calls “behind-the-scenes” work: accounting, managing the social media pages and website, and editing the menu.

There was a big turnout at the barbecues she and her husband held to get to know the community before the cafe’s opening, she said, with many people coming up to her to express their excitement about the reopening of the cafe.

This may be in part to The Hardware Cafe’s legacy in Montana City—the cafe was open for almost 10 years before it closed. “There are a lot of really awesome expectations to live up to,” she said. “It’s exciting to be a part of that.”

Unlike many businesses in the region that have reduced their hours due to a lack of staff, Jenna Abrego said, The Hardware Cafe was able to open earlier than its originally planned date of Sept. 7 because of a full, well-experienced staff. She said she and her husband are even planning on expanding to serve dinner in the near future.

There are still roughly 3,000 fewer people in the Montana workforce than there were pre-pandemic in February 2020, according to the Montana Department of Labor and Industry.

“We got really lucky,” Jenna Abrego said. “A lot of people showed up for interviews.”

While the Abregos are trying to take it one day at a time, Jenna Abrego said they are really excited to expand and grow over the years, noting they someday hope to use the space that was once a hardware store and maybe even do catering.