You are the owner of this article.
Edit Article Add New Article
You have permission to edit this article.
Edit
Home
COVID-19
News
Sports
Features
Surveying the Views
Multimedia
Obituaries
e-Edition
Classifieds
Legal Notices
1 of 4 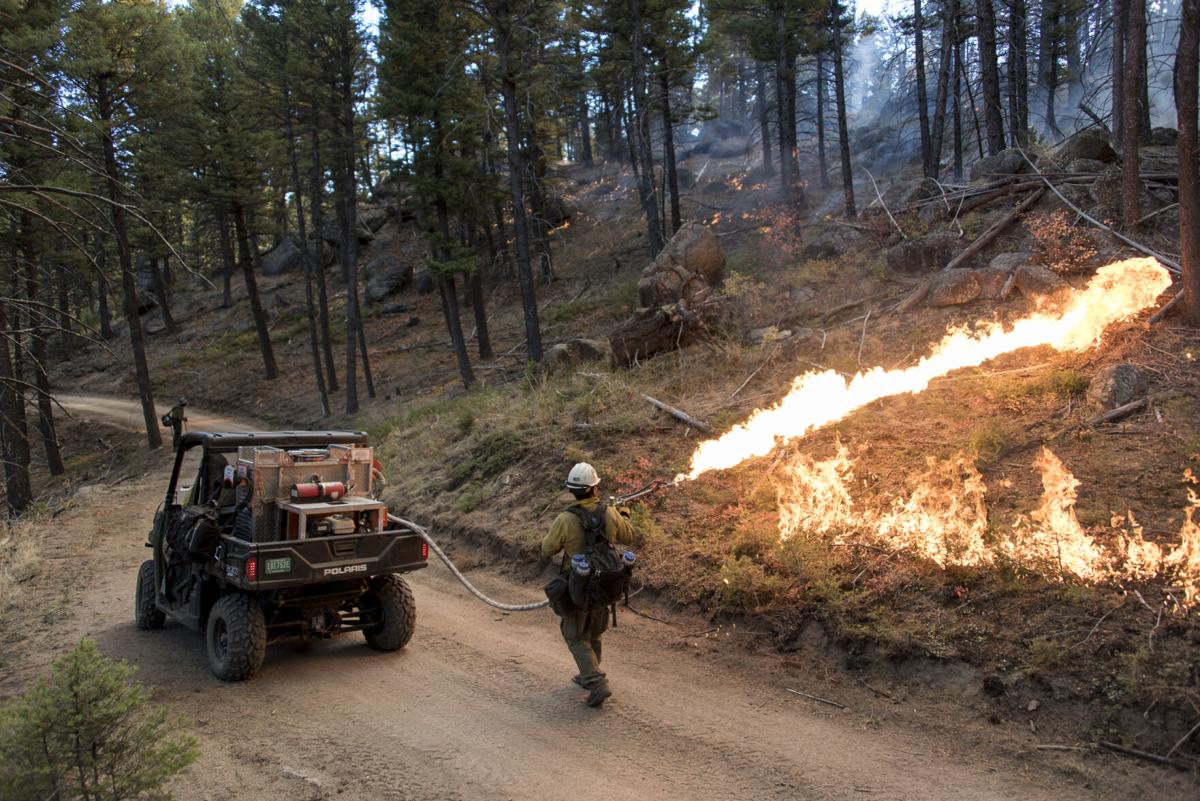 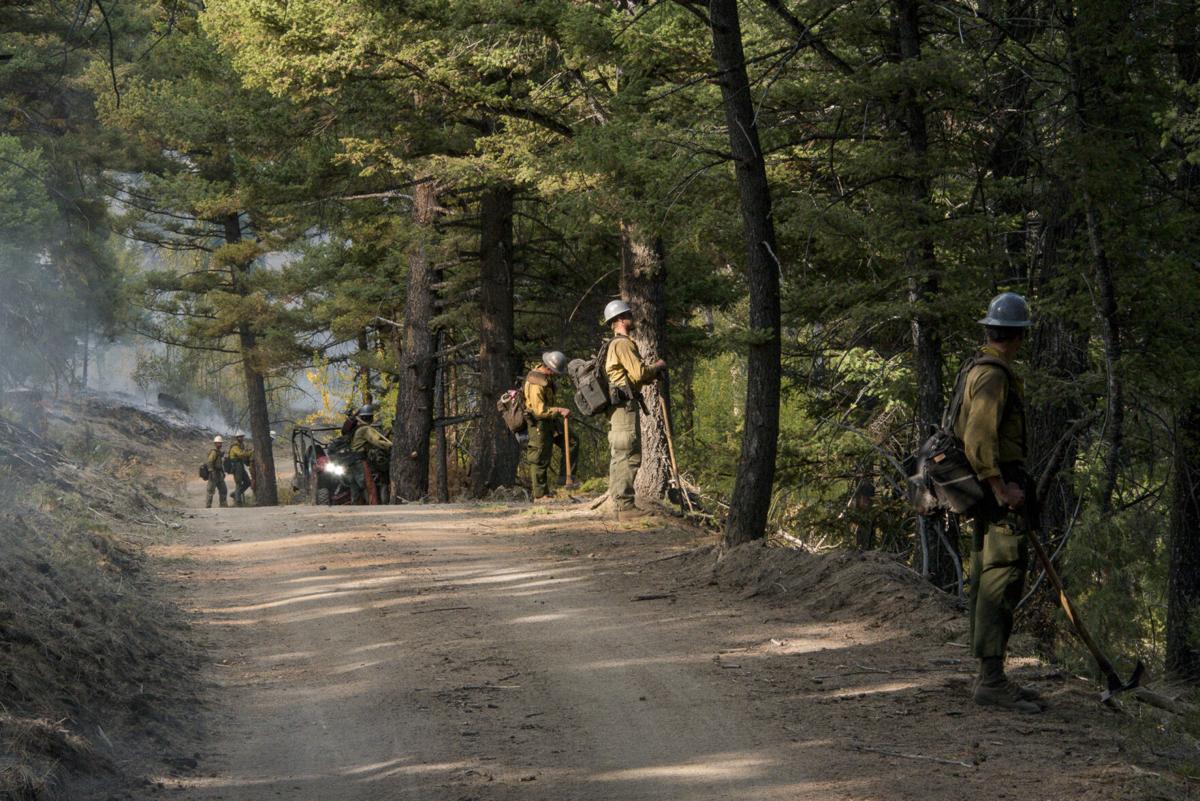 Firefighters from the Logan Hotshots work as a "holding crew" on Sept. 30, looking out for any spot fires that could be ignited beyond the fire containment line—the road—from back-burn operations behind them. 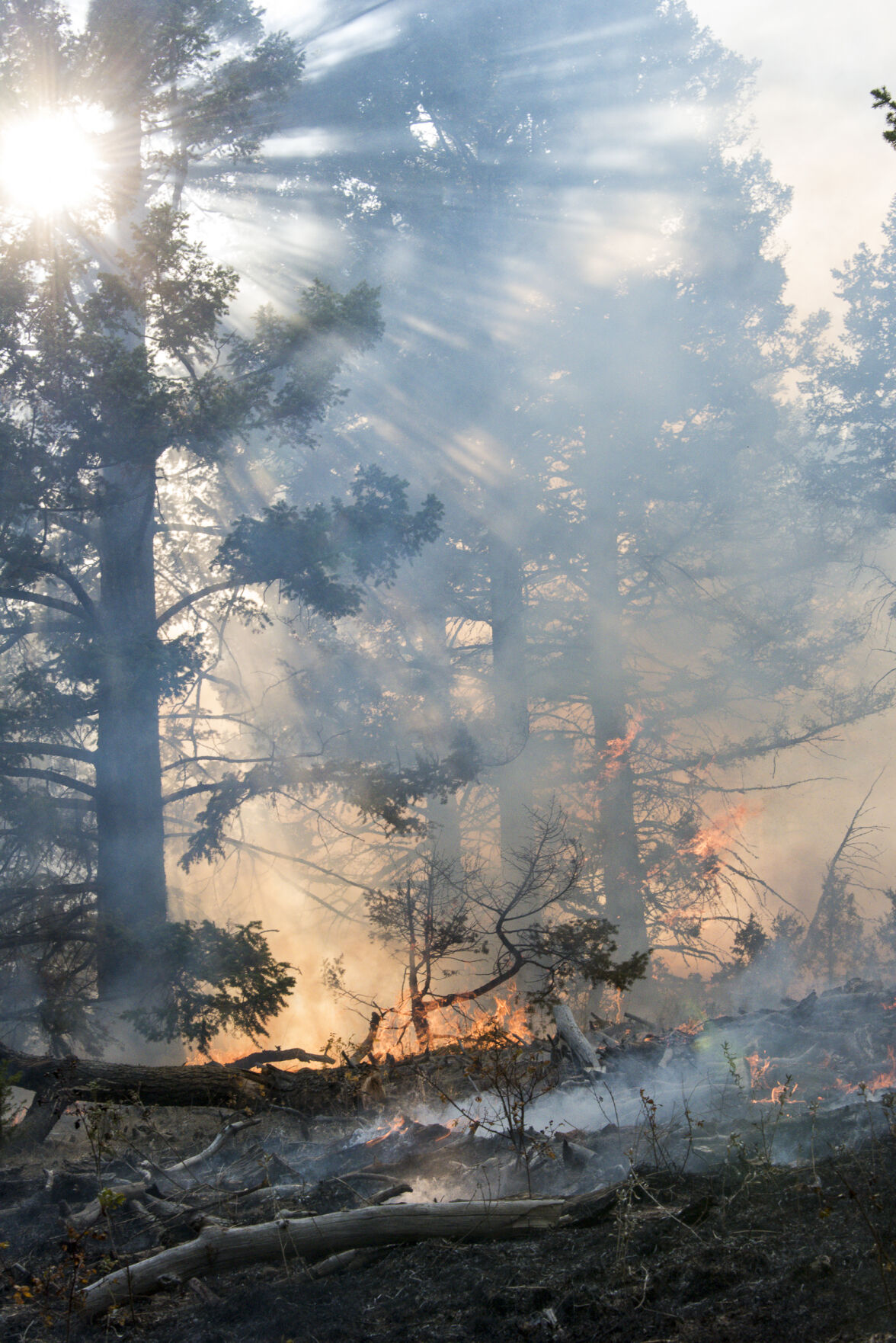 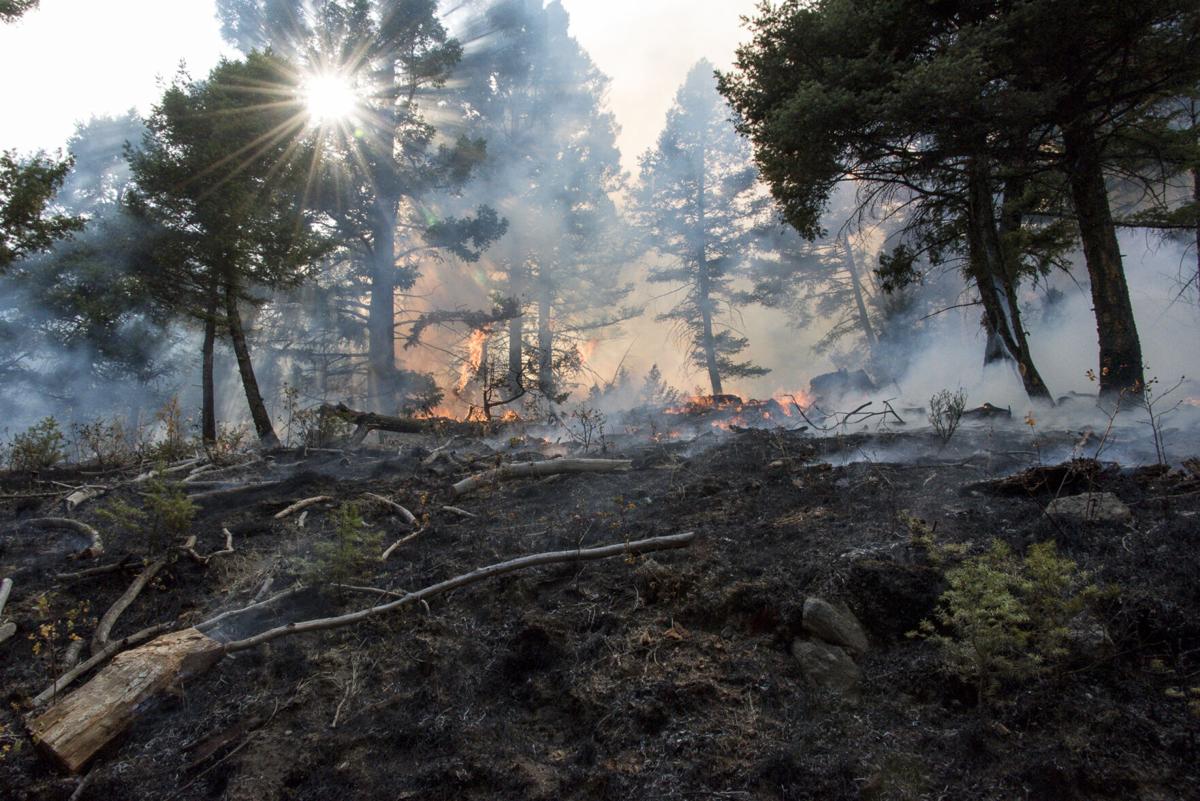 Firefighters from the Logan Hotshots work as a "holding crew" on Sept. 30, looking out for any spot fires that could be ignited beyond the fire containment line—the road—from back-burn operations behind them.

For a third consecutive weekend, a massive plume of smoke rose from the mountains south of Boulder and towered over the town and surrounding terrain to the north and east, depending on the wind. But the smoke this past weekend was different: It was more from fires intentionally lit by the firefighters battling the Haystack Fire and less from the wildfire itself, and it signalled progress in containing the wildfire.

The Haystack Fire, which started on July 30 and smoldered for weeks before exploding and racing toward Boulder last month, was 22,590 acres and 80% contained on Tuesday morning—up from 16,189 acres and 41% contained a week before. The Placer Fire south of Whitetail Reservoir was 184 acres on Tuesday morning and has been exhibiting "minimal fire activity" as crews continue to build containment lines around it, according to the Beaverhead-Deerlodge National Fire. The Placer Fire was discovered on Sept. 4.

On Tuesday, the Great Basin Type-2 Incident Management Team 4, which assumed command of the Haystack Fire on Sept. 22, handed control of the fire, and the approximately 310 people battling it, back to local leaders with the Butte Ranger District of the Beaverhead-Deerlodge National Forest—the same personnel who oversaw firefighting efforts before the national team arrived. The National Weather Service issued a red-flag warning, indicating dangerous fire conditions comprised of low humidity and strong winds, for Tuesday afternoon and evening, and hazardous fire weather was expected again on Wednesday. The conditions could cause "very active fire behavior" and more large columns of smoke, the Jefferson County Sheriff's Office stated on Facebook on Tuesday.

The Great Basin team arrived in response to the fire’s dramatic expansion beginning Sept. 18, when winds up to 60 mph propelled flames toward homes and property south of Boulder, and air tankers dropping fire retardant maneuvered through the landscape. The number of personnel fighting the fire hovered around 460 for the past two weeks. The fire has not reached the homes and all pre-evacuation notices for the area were lifted this past weekend, although an area closure remains in place from Whitetail Road to Interstate 15, bounded by Whitetail Reservoir to the south and the upper reaches of Galena Gulch to the north, and the Galena Gulch Campground remains closed.

In contrast to the scene two weeks earlier, when the fire tore through the Little Boulder River drainage, the imposing displays of smoke seen more recently have been a sign of success—the product of back-burning operations that have facilitated firefighters' gains in containing the fire.

On Sept. 30, the Logan Hotshots and Boise Hotshots—based in Utah and Idaho, respectively—were working toward each other to back-burn on the west side of a dirt road about a mile west of Whitetail Road, near Whitetail Deer Creek.

According to wildland firefighter Brian O'Donnell, the division supervisor for Division Sierra, one of three divisions of firefighting crews working the fire, in order to establish containment lines around a fire, crews must find a fuel-barren "holding feature"—a road through the forest, for example—and work to remove ground fuels between it and the fire when possible, often through burning those fuels in a "back-burn" toward the active fire front.

O'Donnell, 44, said that areas set to be back-burned are generally prepared for the operation in advance, with crews removing trees' lower limbs and other "ladder fuels" that could allow the intended ground fire to climb into tree crowns and torch entire trees—a phenomenon that is more likely to send embers across the intended containment line and cause spot fires.

"If there's no lack of fuels [already], they'll make it lack of fuels," O'Donnell said. "You're trying to stack the odds in your favor."

Under a billowing pillar of smoke emanating from the Boise crew's operation just to the southwest, Logan Hotshot Cody Fowler, 40, used a Terra Torch to quickly ignite swaths of ground fuels along the side of the road. Walking behind an ATV equipped with a tank full of a cocktail of diesel, gasoline and a thickening additive, Fowler, a resident of St. George, Utah, unleashed intermittent streams of seemingly liquid fire upon the hillside above, using the flamethrower with a hose that led back to the ATV-mounted tank. The thickening additive, he said, caused the diesel-gasoline mixture to stick to ground fuels better, and burn far longer, than a thinner concoction.

A few hundred feet ahead of the Fowler and his flamethrower, three other hotshots were igniting ground fire by hand using drip torches—handheld tanks of fuel with with spouts that end in ignitor tips.

Jordan Hanson, a 28-year-old from Logan, was working as a crew-boss trainee that day, helping to oversee the 22 Logan Hotshots on the line. He said that ignitors stagger themselves along the slope, with higher ignitors working farther ahead so that the fire won't trap anyone as it burns upslope behind them.

"You try to keep people in view," he said. "The goal is not to put fire beneath the person in front of you."

Generally, Hanson said, crews need "controlled or at least good conditions" to back-burn, and that "the winds have been pretty favorable for us."

That day, the wind generally blew flames and smoke toward the wildfire—the intended direction, and away from the Logan crew. Nevertheless, behind the ignitors, a "holding crew" of firefighters stood spaced-out along the road, backs to the flames, and looked to the east, scanning the forest for any sign of a spot fire ignited by flying embers.

Meanwhile, Hanson said, between the fire line and the fire front—farther in the interior of the intended back-burn area and well ahead of the ignitors on the line—a few hotshots were igniting a larger fire than the one along the line. The goal, he said, was for the larger interior fire to draw air from surrounding areas, creating localized wind that would pull the flames on the fire line toward it and away from the line. Overhead, a helicopter dropped incendiary "ping-pong balls" to feed the interior fire.

Hanson, who was rounding-out his seventh year of wildland firefighting—his first with the Logan Hotshots after six years with the U.S. Forest Service—said that the firefighters' days on the line generally started with a 6:30 a.m. wake-up at their "spike camp" along Whitetail Road, followed by breakfast and a daily briefing. Then it was off to the fire line by 7:30 or 8 a.m., where they'd stay for about 12 hours of work. At around 8 p.m., he said, they hiked back to camp, prepared gear and equipment for the next day, and ate.

And then they tried to get eight hours of sleep: "It doesn't always happen, but that's what we shoot for."

Hanson’s team makes up just a few of the hundreds of firefighters on the lines and at camps who have worked for weeks to contain the Haystack Fire south of Boulder. And as they move out after their rotation, new crews will arrive to continue the work until it's done.

"I enjoy it," Hanson said. "I enjoy the work that we do, the places we get to go and the people we do it with."