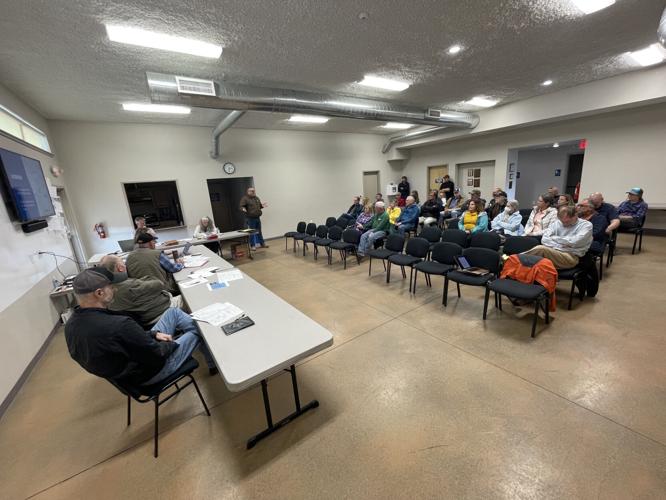 Members of the public fill the Montana City Fire Hall on April 26 for a Jefferson County Commission meeting and public hearing on a proposal to rezone 280 acres of land along nearby Holmes Gulch at the north end of the county. 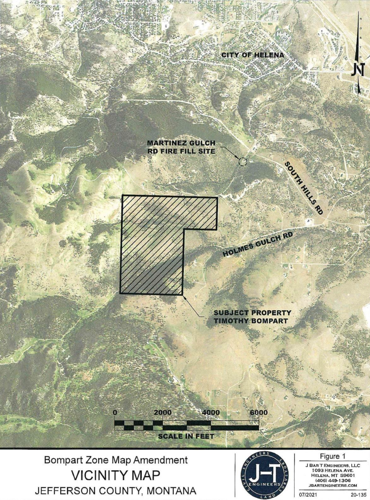 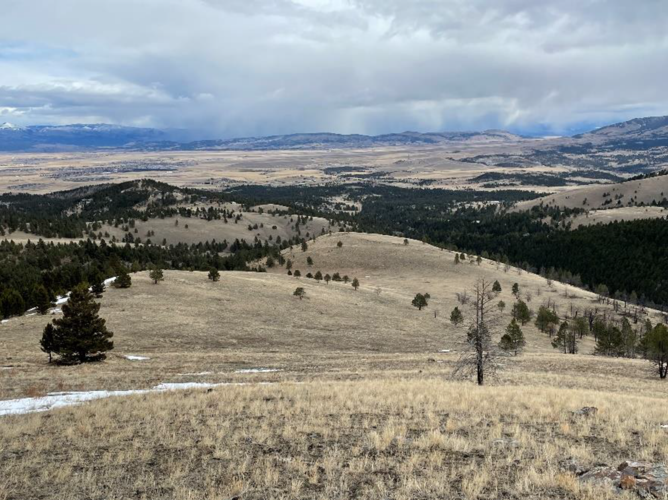 A photo from a Jefferson County Planning Department staff report on a proposed zoning change and residential development along Holmes Gulch Road west of Montana City shows the terrain of the land in question.

Members of the public fill the Montana City Fire Hall on April 26 for a Jefferson County Commission meeting and public hearing on a proposal to rezone 280 acres of land along nearby Holmes Gulch at the north end of the county.

A photo from a Jefferson County Planning Department staff report on a proposed zoning change and residential development along Holmes Gulch Road west of Montana City shows the terrain of the land in question.

A widely opposed proposal to rezone 280 acres of land along Holmes Gulch Road in northern Jefferson County was shut down last week when the Jefferson County Commission voted unanimously to deny the proposal. The commission's 3-0 decision aligned with a staff report and a unanimous Planning Board vote that both recommended denial, as well as an outpouring of public comments exclusively opposed to the proposal, which would have allowed residential lots of 5–10 acres on land where current zoning allows one lot.

Area residents, particularly those living near the property—in Helena's South Hills about 3 miles west of the Montana City interchange, but still within Jefferson County—packed into the Montana City Fire Hall's meeting room April 26, just as they did for a Planning Board hearing on the proposal held at the fire hall on April 14. No members of the public commented in support of the proposal at either hearing.

The land in the proposal is currently zoned basic resource. Landowner Timothy Bompart, of Rego Park, New York, signed a zoning map amendment application on Dec. 10, 2020, requesting that the property be redesignated as residential R-3. The amendment would have changed the allowed density from a minimum lot size of 160 acres to lots of 5–10 acres each. The staff report concluded that the proposal should be denied because it did not meet the review criteria outlined in the North Jefferson County Zoning Regulations, including compliance with the 2009 Jefferson County Growth Policy, road accessibility, appropriate fire coverage and availability of potable water.

At the Planning Board and County Commission hearings, public comments cited concerns about the viability of Holmes Gulch Road—a narrow, dirt road that eventually becomes private near the county line—as the primary access for the property. Nearby residents also voiced concerns about fire risk, water availability, impacts on wildlife, impacts on schools, and traffic impacts on Martinez Gulch Road, which had been suggested as a required secondary access point for the land.

Tony Prothero of J-T Engineers (pronounced "J bar T") spoke as a representative of Bompart and encouraged commissioners to approve the zoning change. He reiterated that impacts from any future development on the property would be mitigated as required by state and county regulations and governing bodies, with public input, during a subdivision approval process. But a subdivision process, which would more tangibly quantify the final density and scale of development and its impacts, couldn't begin unless the land was first rezoned to allow for subdivision, he said.

"There is no specific subdivision of any kind in mind right now. Obviously if this were to be approved, we recognize that would change. But right now there is nothing to be discussed as far as the number of lots proposed," he said. "The way this would normally work would be, if a zone change were approved, at that point somebody … would put together an application that defined the number of lots."

He said that R-3 was chosen as the desired zoning because the land to the property's north and east is already zoned R-3, but that not all of the land in this proposal could be developed to a density of 5–10-acre lots. The portion of the property south of Holmes Gulch Road is "very steep" and timbered, with grades up to 40 degrees that largely preclude development, he said. But to the north of the road, he said, "I think we could meet DEQ standards and I think we could meet county road standards," as well as subdivision requirements.

One of those subdivision requirements is the necessity for at least two points of access. While primary access to the land would likely be via Holmes Gulch Road, Prothero said, "I discovered a potential secondary access point" via an easement for Martinez Gulch Road, to the northeast of the property, that reaches the property. He acknowledged that neither road currently meets county standards.

"All I’m trying to point out here is it appears there are two access points to the property," he said. "To me, that lends some credibility to the fact that maybe something could happen on this project."

But Ken Vivrette, a local realtor and owner of Montana City Realty, said during the hearing that "I do take exception to [Martinez Gulch] being used as a second ingress-egress." He said he believed that just because an easement for Martinez Gulch Road reached the land in the proposal, that may not automatically grant legal access to that land via the easement. Commissioner Bob Mullen said Vivrette was basing his conclusion on a case-law precedent that likely didn't apply to the circumstances surrounding this property.

However, when asked by The Monitor after the meeting for the spelling of his last name, Vivrette denied making any comments during the meeting, and he refused to provide his name to The Monitor and then quickly walked away. But the county made an audio recording of the meeting, including public comments, as is standard practice.

County Planner LaDana Hintz said that Vivrette was originally listed on the rezoning application alongside Prothero as a representative of landowner Bompart. However, after the release of the staff report recommending denial of the proposal, Vivrette requested that his name be removed from the application, she said.

Regardless of the legal access, residents along Martinez Gulch Road said that the road, which they pay to maintain through a rural improvement district, cannot handle the additional traffic that could have resulted from rezoning and development of Bompart's property.

"Martinez Gulch Road … is not set to handle such traffic and would never be able to," Neil Brunett said, noting that further improvements would cost homeowners even more. "We put hundreds of thousands of dollars into that road already."

Brunett, echoing nearly all other public comments, raised concerns about the impact development would have on wildlife, particularly hundreds of elk that nearby residents said they regularly observe on the property.

"Wildlife doesn’t merely go away—we affect it," he said, pointing out that Helena is killing wildlife within the city. "There are so many things on that property that would be deleted off the face of this earth."

Mike Korn, a Montana City resident whose career with the Montana Department of Fish, Wildlife and Parks spanned 30 years—including time as the game warden in the Jefferson County region—and who helped originally craft the county's zoning regulations, said that wildlife biologists currently working with FWP confirmed to him that the land in the proposal is winter range for elk.

Area resident Alvaro Freyre said that "the reason I live here and many of us live here is because it’s so damn beautiful, it’s so beautiful, and it’s because it has open space by all our houses." He said that he and other landowners in the area bought property in the area because surrounding land was zoned basic resource, so they believed it would remain largely undeveloped.

Holmes Gulch resident Margaret Dufrechou argued that "zoning is the way that the county controls land use for the benefit of all of the county," and that Bompart's proposal would benefit only himself.

During the commission's discussion on the proposal—and the recommendations from staff, the Planning Board and the public to deny it—Commission Chair Leonard Wortman lauded the large public turnout and said that "this is how we find out things and how we learn."

Mullen, who represents the north county, asked those present if they "ever see a time when basic resource should ever be converted to another use." Many people who commented against the proposal, including Korn, replied that "it depends" on the circumstances of a proposal, but that this one did not pass muster in their opinion.

Freyre, admitting with a laugh that "I hate to say it, but I came from California more than 10 years ago," argued that lands zoned as basic resource could still hold immense value and development potential for their owners because many people would pay millions of dollars to have a home on 280 acres with a herd of elk on it.

"It’s got enormous value. People love it. I love it," he said.

Saying that "there's a balance" to property ownership and land use, and that "the zoning, in my mind, is up front, foremost and most important" because landowners count on it to steer future land use, Commissioner Cory Kirsch motioned to deny the zoning change.

Mullen seconded the motion, adding, "before I do it, I would like to thank Tony [Prothero] for probably being the bravest guy in the room."

Wortman seconded both remarks, and all three voted to deny the proposal.