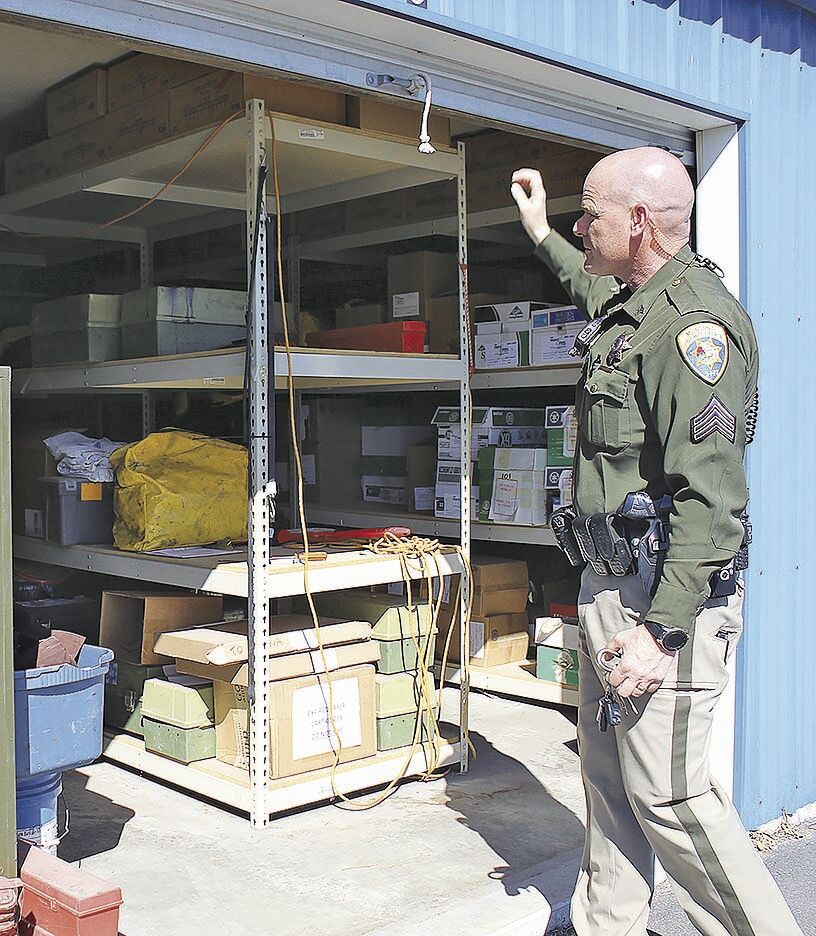 Sgt. Jay Nelson shows the inside of one of the MHP’s 17 outdoor storage units, all of which he describes as full. (Diana McFarland/Boulder Monitor) 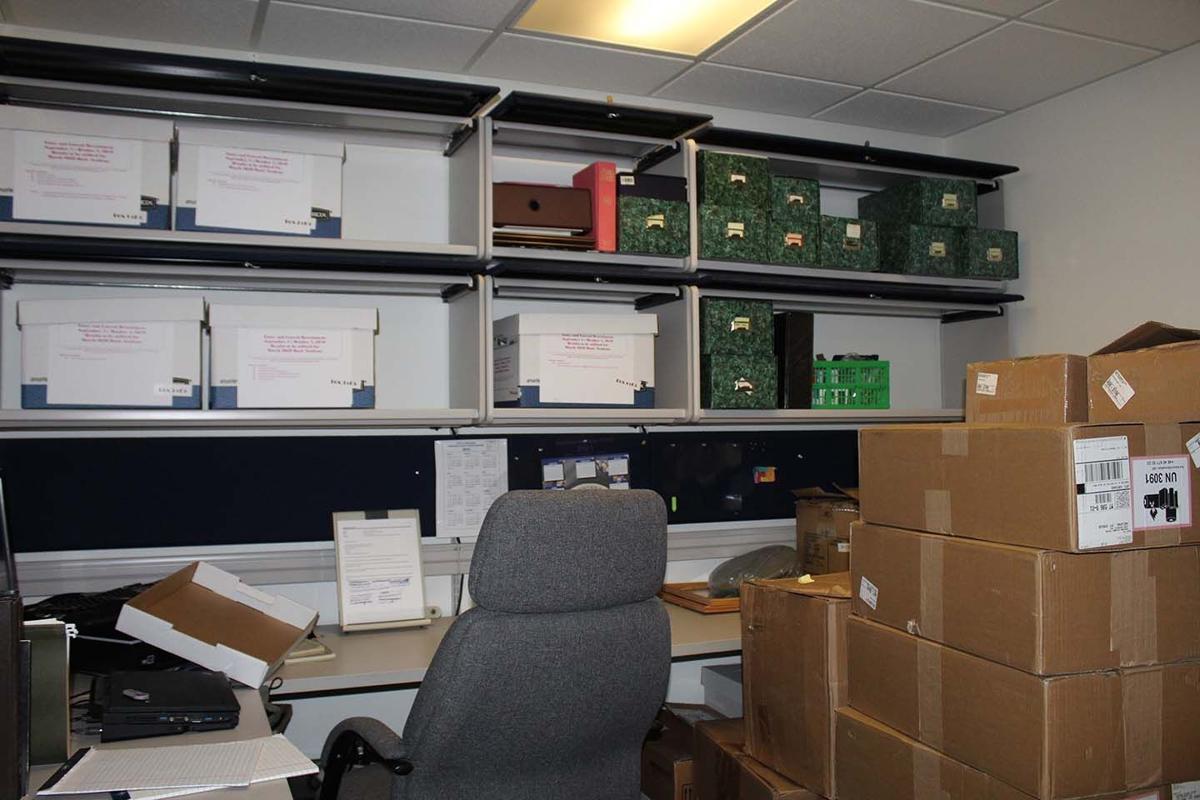 An office that is now used for storage. 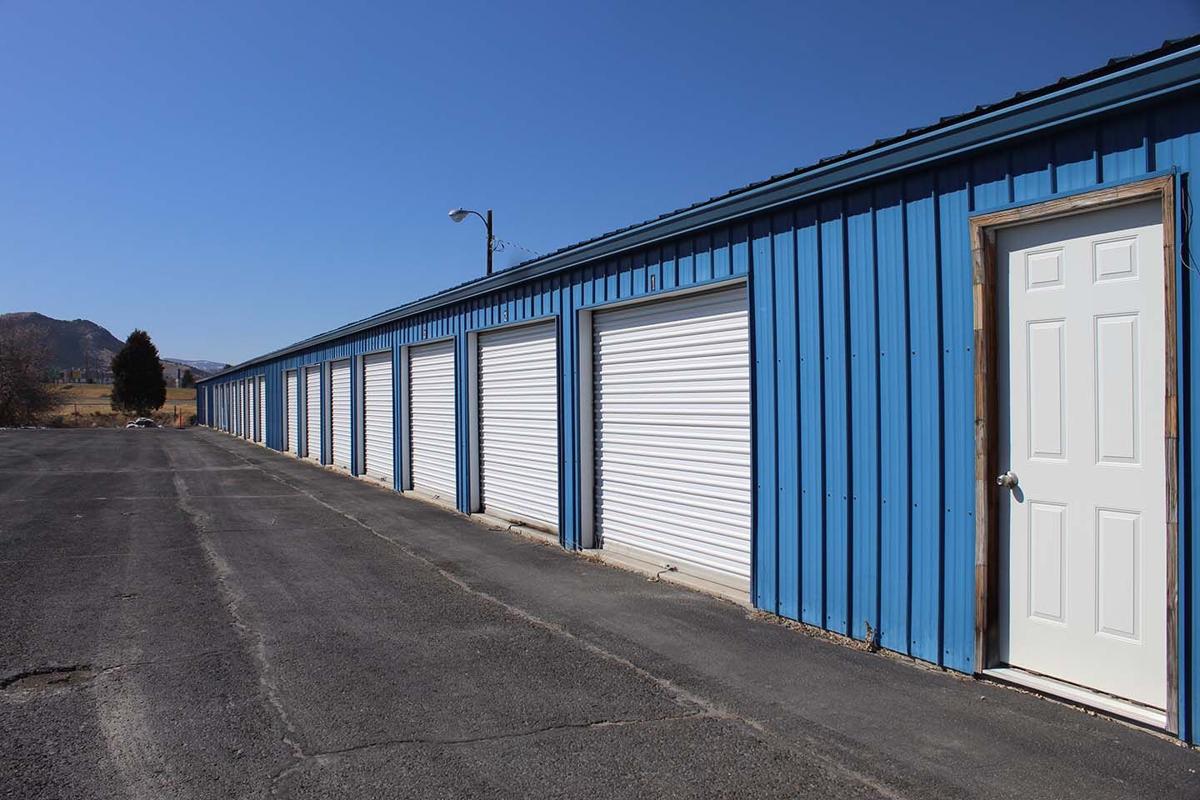 The outdoor storage units require employees to cross the parking lot to get to them. 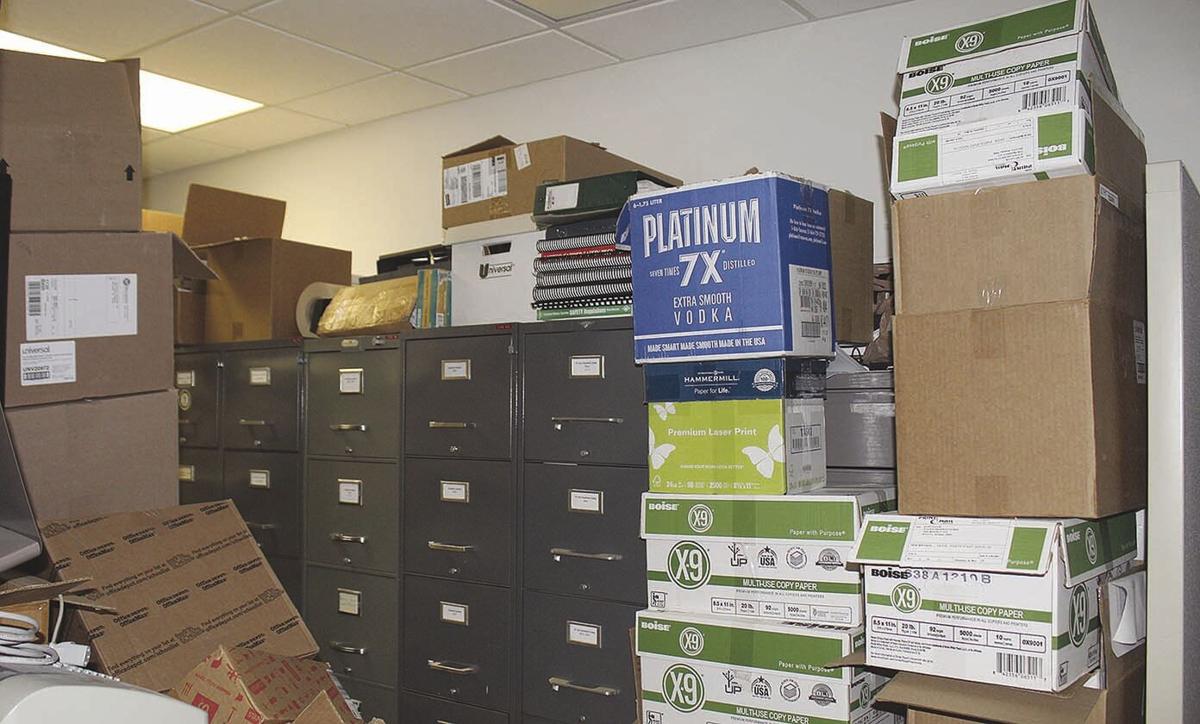 One of several rooms filled to overflowing at the Montana Highway Patrol headquarters in Helena. The move to the former Montana Development Center in Boulder would quadruple the amount of space available to the agency.

Sgt. Jay Nelson shows the inside of one of the MHP’s 17 outdoor storage units, all of which he describes as full. (Diana McFarland/Boulder Monitor)

An office that is now used for storage.

The outdoor storage units require employees to cross the parking lot to get to them.

One of several rooms filled to overflowing at the Montana Highway Patrol headquarters in Helena. The move to the former Montana Development Center in Boulder would quadruple the amount of space available to the agency.

A bill enabling the Montana Highway Patrol to move its headquarters to Boulder is making its way through the legislative process, but Sgt. Jay Nelson is still watching and waiting, as he won’t consider it a done deal until all the pieces are signed off by the governor.

And while Nelson, who serves as the Highway Patrol’s Special Operators Commander, waits for Gov. Greg Gianforte’s signature, the decision to make the move came about rather quickly.

It was Chief Deputy Attorney General Kris Hansen who initially got the ball rolling, a process she called “divine intervention.”

Hansen, who was serving as a legislator when the Montana Development Center was closed, had personally visited the campus during that time and remembered what a nice facility it was.

As the lease was expiring on the current MHP headquarters, she also realized that they needed to come up with an alternative.

“I got up on a Wednesday morning and I thought Boulder and that was it,” she said. That was followed with meetings with Montana Attorney General Austin Knudsen, MHP Colonel Steve Lavin and legislators involved with appropriations and budgeting. By Friday morning, the process had begun, said Hansen.

“I had no idea it would go that fast,” she said.

Meanwhile, those located at the Helena headquarters have for years worked in an office complex beset by piles of boxes and just plain stuff - stacked on the floor, on unused desks, on top of file cabinets or stored in multiple storage units located across the parking lot.

Nelson gave The Monitor a tour of the facility last week and provided a firsthand look at what led to the decision to move.

The Highway Patrol has occupied the offices at 2550 Prospect Ave. since 1996, and today uses all of the 7,500 square feet available — and more.

“It’s beyond cramped,” said Nelson about the space.

The move to the former Montana Development Center administration building in Boulder, with its 30,000 square feet — four times the size of the current offices — would allow the agency to operate with more efficiency, save money and enhance logistics, said Nelson.

Nelson said the current headquarters lacks adequate meeting space, requiring the agency to sometimes rent other accommodations — as well as put those from out of town in nearby hotels. The lack of in-house meeting space can also cause scheduling difficulties, said Nelson.

The 48-acre north campus in Boulder also boasts a series of cottages that could be used for housing up to 52 cadets going through the agency’s trooper academies, said Nelson.

Currently, the Highway Patrol shares accommodations with other law enforcement agencies in the state at the Law Enforcement Academy. If that facility is full, the Highway Patrol can also use the space at Fort Harrison or Carroll College. However, the latter two options cost money, said Nelson.

Since the former MDC campus is owned by the state — currently the Department of Public Health and Human Services with plans to transfer that to the Department of Justice — there would be no need to rent additional facilities — a cost savings, said Nelson.

That also goes for the headquarters offices, as the state leases the space in Helena, said Nelson.

The lease at 2550 Prospect Ave. expires at the end of June, meaning that once the legislative portion of the transfer is complete, the move would quickly be underway — with occupancy anticipated this summer.

The MHP currently pays $135,329 to lease the headquarters offices, said Nelson. The department paid $48,501 to Fort Harrison and $62,084 to the Holiday Inn in 2020, said Nelson, adding that the cost for Fort Harrison was a little higher than normal since the MHP had two academy classes that had to stay there.

The grounds at the former MDC campus would also lend itself to cadet advanced training in the agency’s various subspecialties, said Nelson.

Nelson said moving the headquarters to Boulder would also put it closer to I-90, where the majority of traffic incidents occur, providing that logistical advantage.

For the day-to-day office operations, the move would allow the agency to spread out and better organize its records and equipment — as the MDC administration building has an ample warehouse.

“Everything will be at our fingertips,” said Nelson of the increased efficiency of a single area for storing supplies, records and other materials.

In addition to stacking boxes on the floor, on spare desks and more, the current MHP headquarters uses 17 storage units, plus an additional facility.

The storage units are located outdoors and across the parking lot — and they’re full, said Nelson.

Nelson called keeping track of the contents of the various units a “nightmare.”

For Hansen, using outdoor storage units for equipment and other materials is simply not sustainable.

The headquarters, when fully staffed, has 25 employees. The offices have one male and one female bathroom, plus a small break room that serves the entire staff.

The administration building in Boulder has three to four restroom units, said Nelson.

The ample Boulder campus would also allow the agency to store its vehicles, and hopefully the two radio shop employees — who outfit the vehicles — can also make the move, said Nelson.

To prepare for the move, Major Kurt Sagar has been put in charge of Phase 1, which focuses exclusively on the administration building.

Phase 2 would include the cottages and the other buildings, but the emphasis is now solely on the administrative building, said Nelson.

The MHP headquarters employees were all offered their positions in Boulder. Those not wanting to make the move can pursue other opportunities within the state system, said Nelson.

“Change is sometimes hard,” said Nelson, but added that the move could take the MHP to the next generation.

What’s been particularly helpful is the enthusiasm expressed for the move by the City of Boulder and Jefferson County, said Nelson.

In addition to providing a new use for the long vacant campus, the move, with its more than 20 employees, will likely provide a boost to local business, said Nelson.