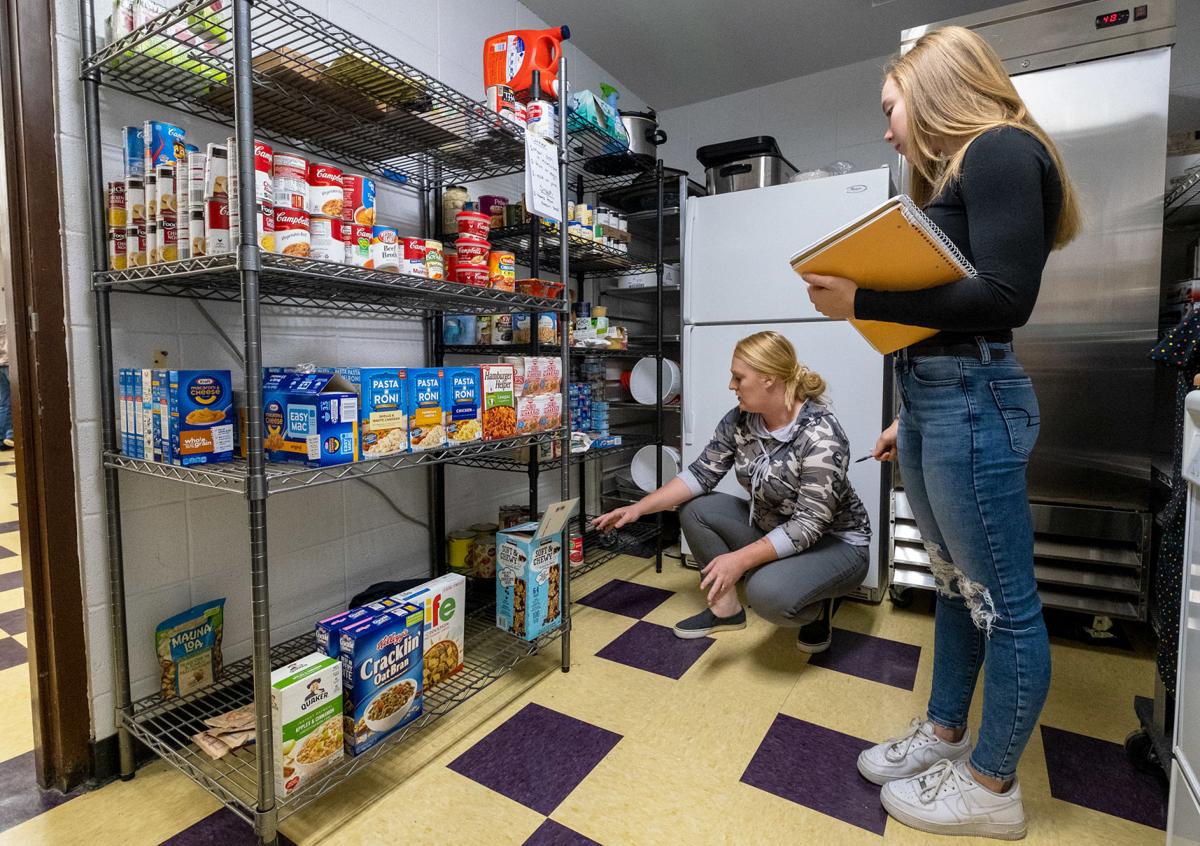 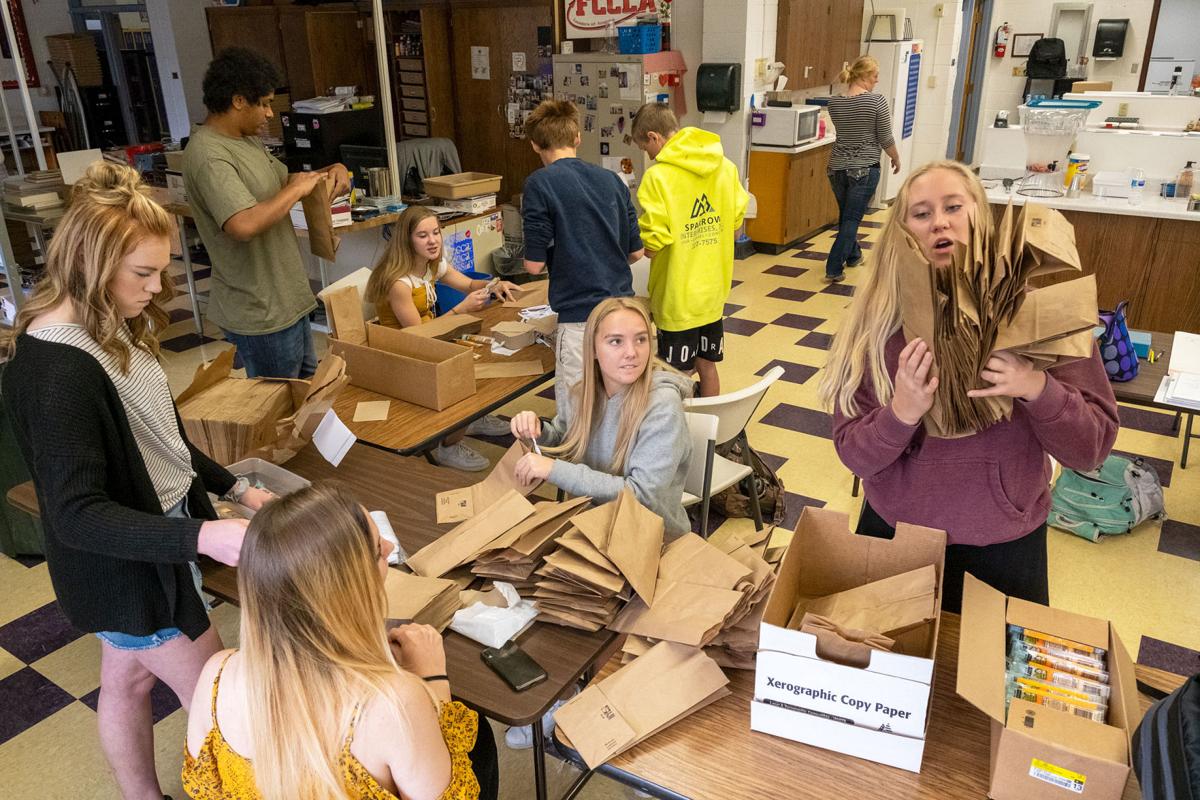 Students in Cassidy Parsons’s “The Breakfast Club” class prepare bags of food to sell for breakfast on Sept. 19. 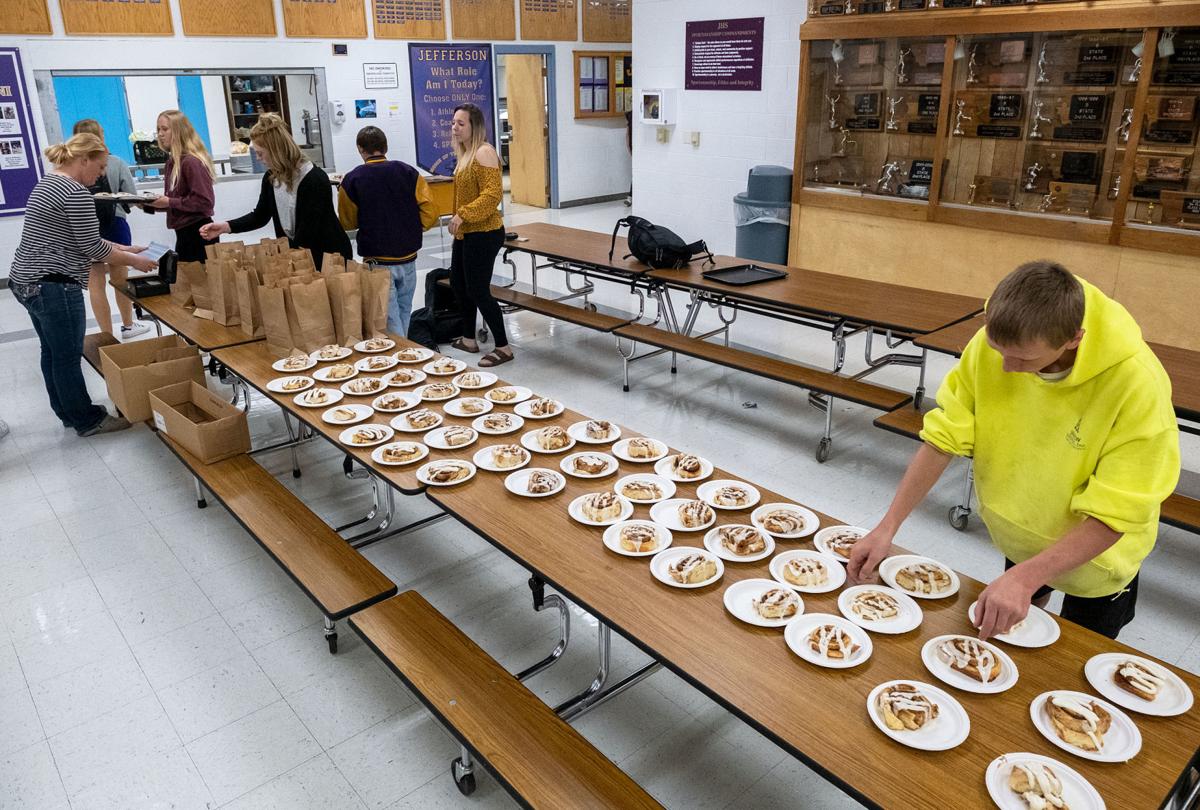 “The Breakfast Club” sets out cinnamon rolls and bags of food to sell at breakfast on Sept. 19.

Students in Cassidy Parsons’s “The Breakfast Club” class prepare bags of food to sell for breakfast on Sept. 19.

“The Breakfast Club” sets out cinnamon rolls and bags of food to sell at breakfast on Sept. 19.

Soon after starting her junior year in 2018, Jefferson High senior Jadyn Bellander sought a community project for a leadership program she was participating in. About the same time, she and her advanced drama classmates were helping at Boulder Elementary on Thursdays with KidsPack, a nationwide program to make sure needy children don’t go hungry outside of school.

“I thought about our school and how there is so much poverty in Boulder,” Bellander said. “Then I realized that some of these students have KidsPack K[indergarten] through eighth grade and then they get into high school and no one’s looking out for them anymore. So that broke my heart, that some of these students were going home and didn’t have sufficient amounts of food.”

Bellander met with Hesford to discuss starting a food pantry at Jefferson High. She then approached Cassidy Parsons, Jefferson High’s family and consumer sciences teacher, with the idea, and learned that Parsons had wanted to start a pantry but hadn’t yet been able to.

With Hesford’s help, Bellander organized a food drive from Jan. 28 to Feb. 11. The “really successful” results, sourced by a handful of local drop-off points and donations from Gallatin Valley Food Bank, formed the foundational inventory for the Jefferson High food pantry, Bellander said.

Now a busy senior “taking a lot of hard classes” and playing volleyball, Bellender said her work on the food pantry is “a lot more behind the scenes”; mostly she shops at Super 1 Foods in Helena when cash donations come in.

“I am not quite ready to let my project baby go, but I don’t have the time that I had last year to put into it,” she explained.

Fortunately, Parsons had a class ready to take it on.

By the time Bellander approached Parsons with her idea for a food pantry, Parsons had already that year begun her own project to feed students: a morning food-service class that prepares and serves breakfast for students.

Parsons said she started the breakfast service for students who could go to Boulder Elementary for breakfast at 7:45 a.m. were it not for Jefferson High’s 8 a.m. start time making it infeasible to do so.

Students in the food service class — Parsons calls it “The Breakfast Club” — are “in charge of all aspects” of what is essentially a small business. Students monitor inventory, crunch numbers and schedule tasks in addition to preparing and serving food.

On a typical morning, Parsons’s students serve 55 to 60 breakfasts. Because the meals are supported by private donations and sponsorships and not state funds, she said she is free to choose to help kids who may not otherwise qualify for free or reduced cost “so everyone can get breakfast.” Those who can pay $2.

When Bellander started working less on the food pantry, Parsons gave the responsibility to “The Breakfast Club.”

Parsons said the food pantry’s primary customers are kids in need, though kids “so stressed out they forgot to eat” are welcome to use it. She asks faculty and staff to refer students they believe might benefit from the food pantry. Deliveries are made discreetly to students’ lockers or classrooms at day’s end, or students can come and choose their own food items to take home. When students need an item not in stock, Parsons sends them to L&P Grocery with a cash-paid voucher for that item, which the store discounts. If necessary she will even let someone eat at school before going home.

The food pantry is replenished by donations and food drives and relationships with Gallatin Valley Food Bank, Helena Food Share and Cole’s Pantry, the latter which donated $1,000 toward starting up Jefferson High’s food pantry.

“We hand half out before Thanksgiving and the other half before Christmas break,” she said.

To those wanting to donate, Parsons suggests quickly prepared individual meals or items a student can bring home to the family. She also welcomes eggs, pancake mix and other items for serving at breakfast.

A recent addition to the food pantry is a selection of personal hygiene items, including shampoo, soap, deodorant and laundry detergent that Parsons said any student can choose from.

Despite her busy schedule, Bellander said fighting hunger is “something I never really want to let go, even if I don’t have an opportunity to do a big project like this.”

She recently applied for the State of Montana’s Youth Leadership Council, a program where twenty 7th through 12th graders are convened by the Governor and First Lady to engage in service projects addressing childhood hunger. If accepted, Bellander will attend an orientation in Helena on Nov. 22.

“I have been so blessed in my life and I’ve never really had to struggle for this and I grew up in a pretty well-off community [Montana City],” Bellander said to explain her motivation. “So I’d never been around this problem [of going hungry] before. And I honestly couldn’t imagine: How you could sit in class and be wondering what you’re going to eat and still be learning, because I’m also really passionate about education and learning” — she wants to be a teacher, she said — “and I just didn’t understand how you could learn without having nutrition in your life.”