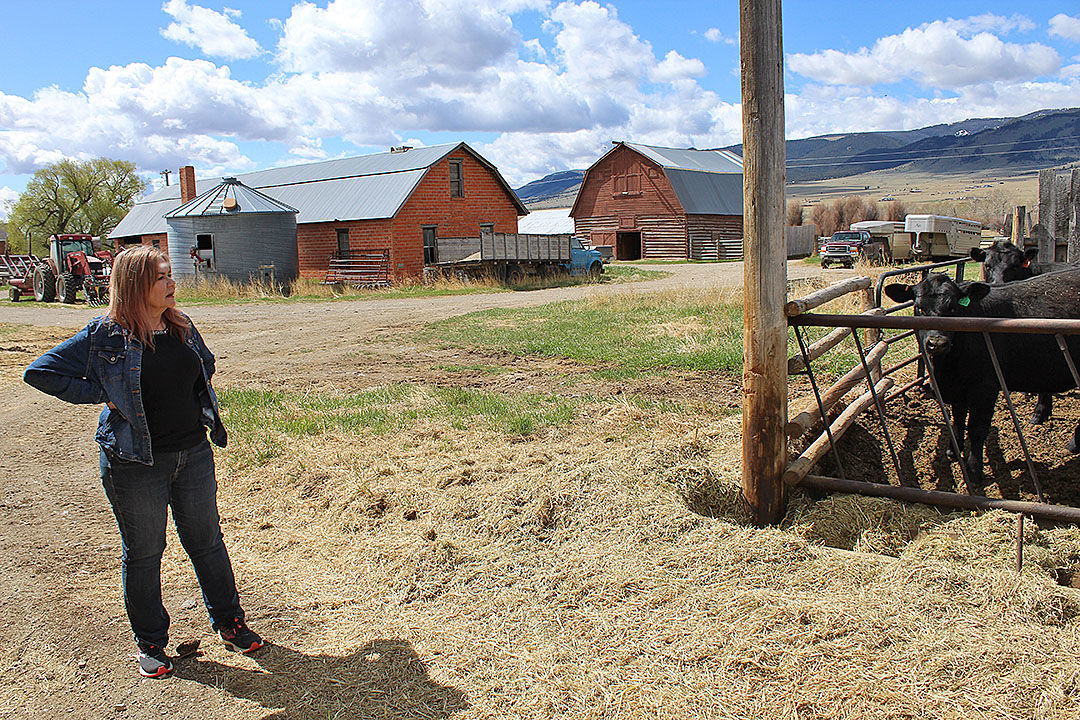 Boulder rancher Terry Minow explains how some heifers are not sold during the annual auction and instead are held over as replacement heifers for older cows being phased out of production. Local ranchers are taking a wait-and-see attitude toward the price of calves, given the complications introduced into the industry with COVID-19. 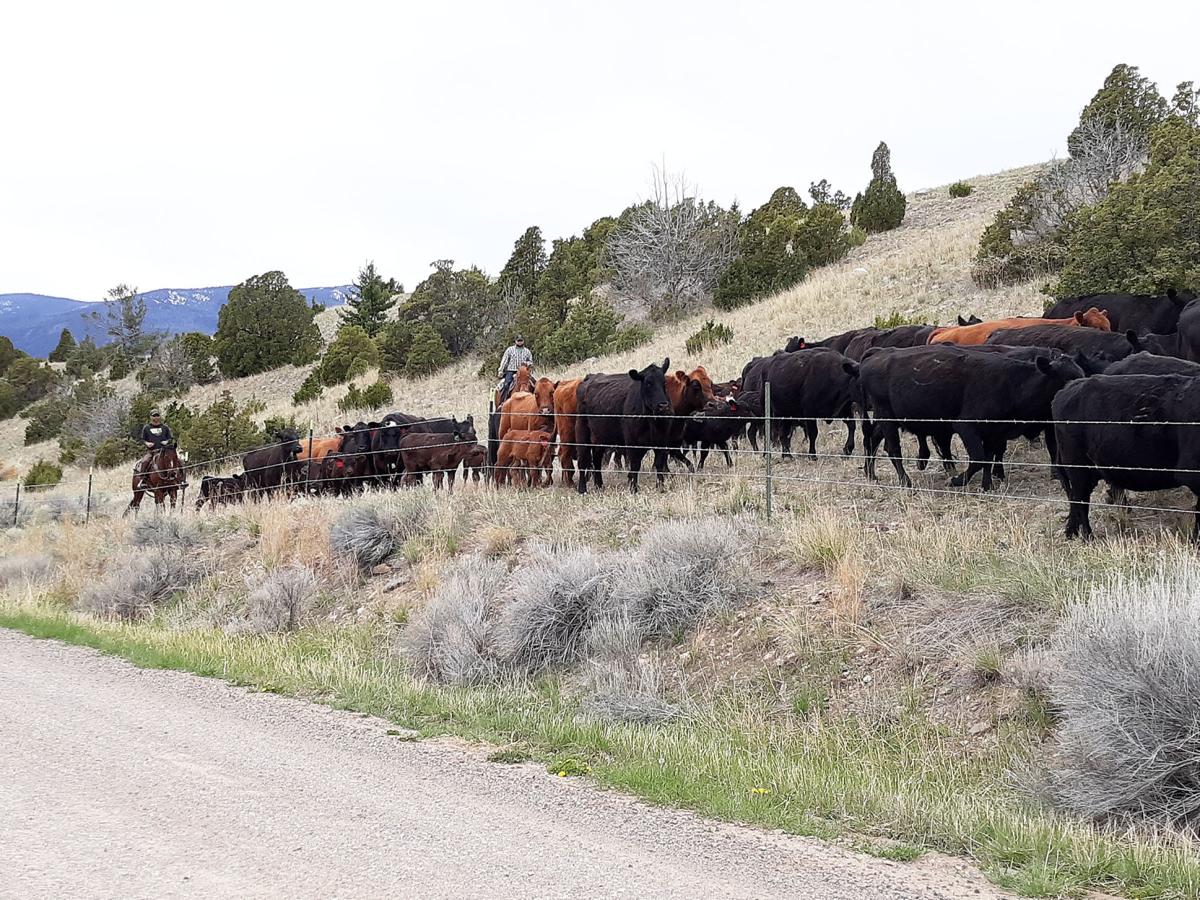 Cowboys with the Compton Ranch move cattle up to to fresh pasture Sunday along Elkhorn Road.

Boulder rancher Terry Minow explains how some heifers are not sold during the annual auction and instead are held over as replacement heifers for older cows being phased out of production. Local ranchers are taking a wait-and-see attitude toward the price of calves, given the complications introduced into the industry with COVID-19.

Cowboys with the Compton Ranch move cattle up to to fresh pasture Sunday along Elkhorn Road.

Jefferson County ranchers have struggled for the past five years with falling prices and rising expenses, but the COVID-19 crisis has exposed another crack in the system — a supply chain backup, leading to uncertainty for producers planning to sell their stock in the fall.

“We are in a race right now to increase the volume of cattle that can be slaughtered so we can reduce the bottleneck and backlog of cattle in the industry,” said Bill Bullard CEO of R-CALF USA, (Ranchers-Cattlemen Action Legal Fund United Stockgrowers of America) a membership-based organization that represents U.S. cattle and sheep producers.

Bullard is referring to the closure and slowdown of beef meatpacking plants due to COVID-19 infections among workers — an industry that is dominated by four national and multinational corporations. That domination — estimated at about 80 percent of the market — has led to lawsuits and investigations into alleged market manipulation and calls for legislation, such as country of origin labeling, to remedy the situation. Bullard said media attention due to COVID-19-related meatpacking plant closures has accelerated those efforts — and added more complexity — to an ongoing problem.

Local ranchers, meanwhile, are finishing up the calving season by watching and waiting to see how the markets respond to the COVID-19 crisis.

“Nobody knows what they’re paying,” said rancher Ed McCauley about the prices that will be offered when video auction sales for calves begin in June.

Terry Minow, who along with her husband, Brud Smith, own a ranch south of Boulder, said COVID-19 adds another layer of pressure to an industry that has already seen prices for feeder calves drop by 43 percent since 2015. Five years ago, Minow said they were getting $2.49 per pound, or $1,693 for the average steer. Last year, that fell to $1.53 per pound, or $963 per steer.

“COVID-19 is adding stress to what was already there,” said Minow, adding that her ranch produced 400 calves this year.

Boulder rancher Tom Carey said he’s started getting calls from those looking to buy “dry” cows - two to three year old cows who have not calved. Typically, those cows would have been sold off by now, he said. Carey said his operation held onto those cows longer this year because the market is 50 percent of what it usually is.

The calls represent a new development, said Carey, and he attributes the demand to COVID-19.

Carey said he has sold directly to the consumer before, but not at the volume he’s recently experienced.

With meatpacking plants shut down or having slowed production due to COVID-19, there are a half million cattle past the point where they are usually harvested, said Bullard.

For ranchers, like those in the Boulder valley, it could mean there will be no market in the fall, said Bullard.

Minow said that unlike pigs and chickens, cows can be overwintered, but that is not a situation most ranchers are prepared to deal with.

In a typical year, calves and cows are driven up to hillside pastures to graze over the summer, returning in the fall when the calves selected for sale go to auction, said Minow. They are purchased by those who operate feeder lots for finishing.

If the cattle were to be kept over the winter, they need hay, pasture and shelter, which are added expenses, said Minow.

In the pork industry, pigs are being euthanized because they are raised to exact weight specifications and with plant closures and labor shortages due to COVID-19, there is no way for them to be slaughtered and there is no room to keep them on the farm, according to the National Pork Producers Council.

The same situation is occurring with chickens, according to multiple news reports

The pork and poultry industries are also dominated by a few meatpackers, but those companies, such as Smithfield Foods, also practice what it calls “vertical integration.”

With vertical integration, the meatpacking corporation has control of the entire production cycle — from birth to reproduction to slaughter to processing — through the use of contract producers.

Bullard said the beef industry so far has been able to fend off those efforts.

As June approaches and contracts are set, Carey is keeping an eye on the calf market. He’s worried that prices will be the same as last year, or worse, with the added problems brought on by COVID-19.

McCauley said he feels a bit more insulated because he’s been selling to an individual buyer in Nebraska for years. However, if the packing plants remain backed up due to closures and slowdowns, then the feeders won’t bid on the calves, he said.

“All we can do is ride out the storm,” he said.