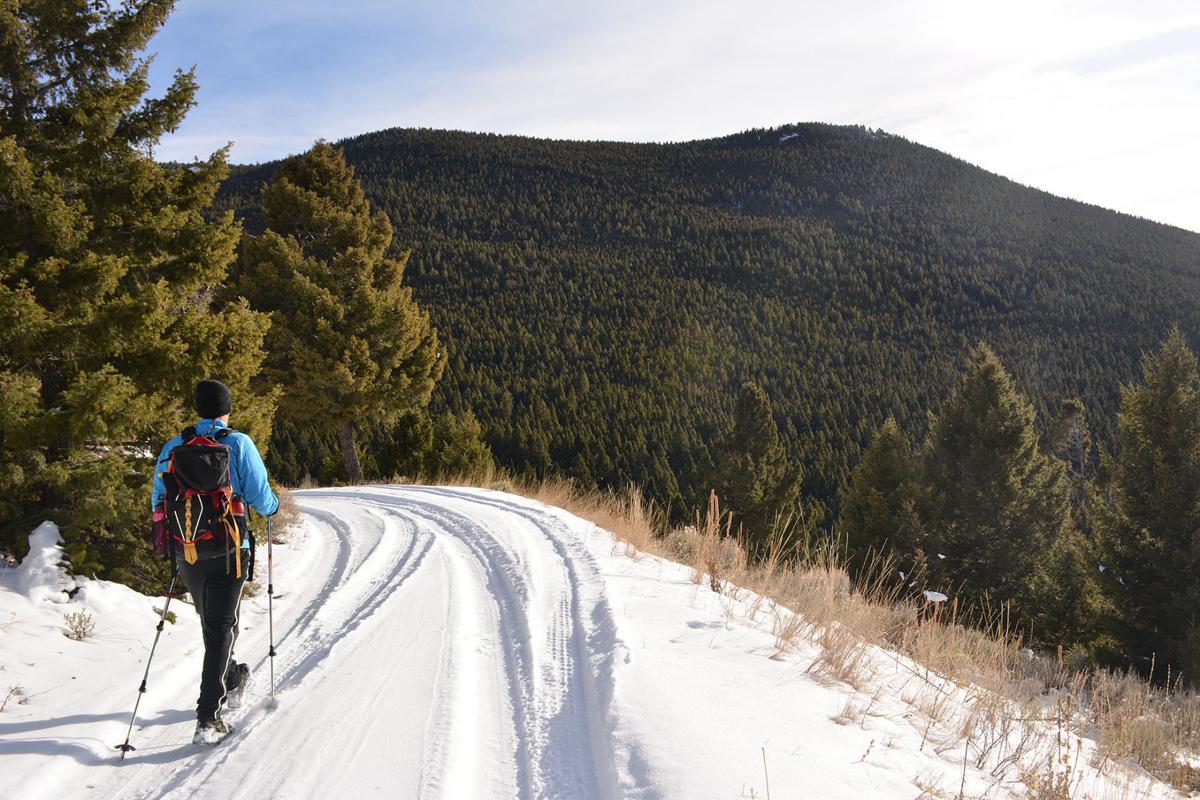 Snowshoer Jeff Errett, proceeding on Tramway Road, approaches views of the massively wooded ridge across Queen Gulch. Read more about enjoying this and the Diego Town Road in winter starting on page 10. 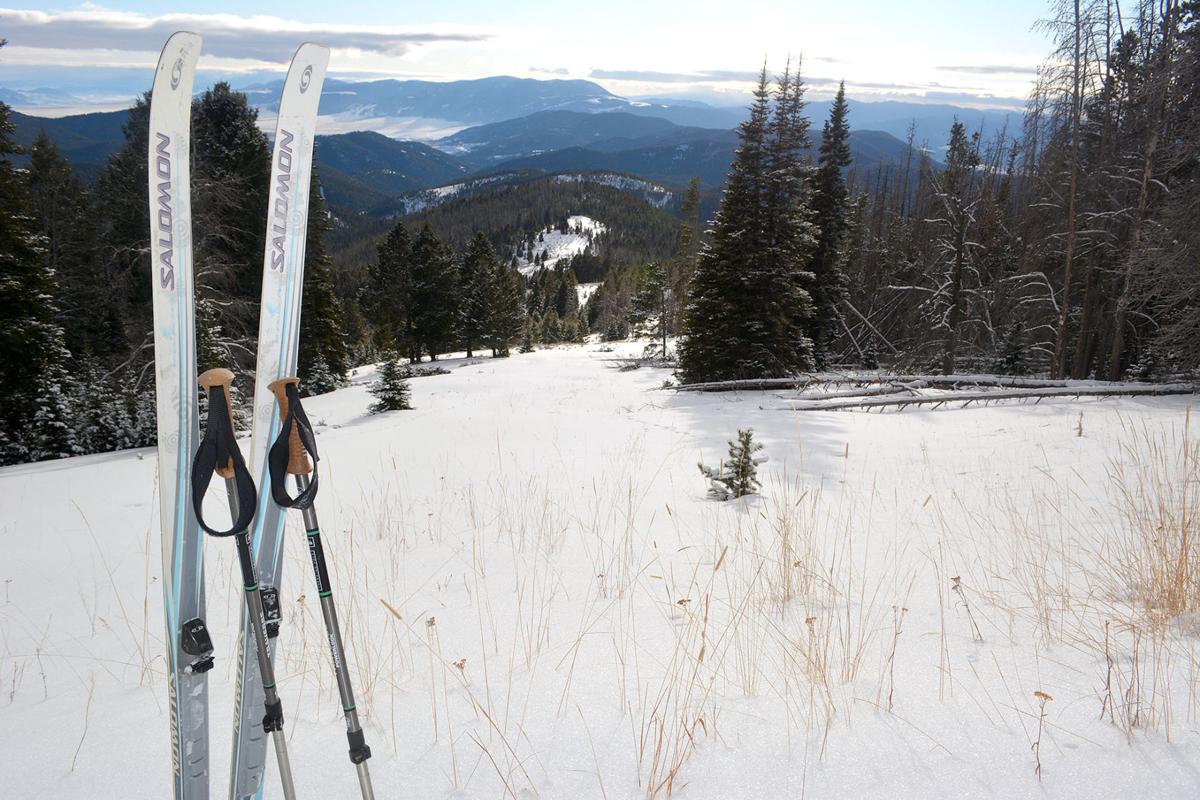 Wooded foothills unfold down the Elkhorn drainage toward the Boulder Valley from a skiable ridge off Diego Town Road. 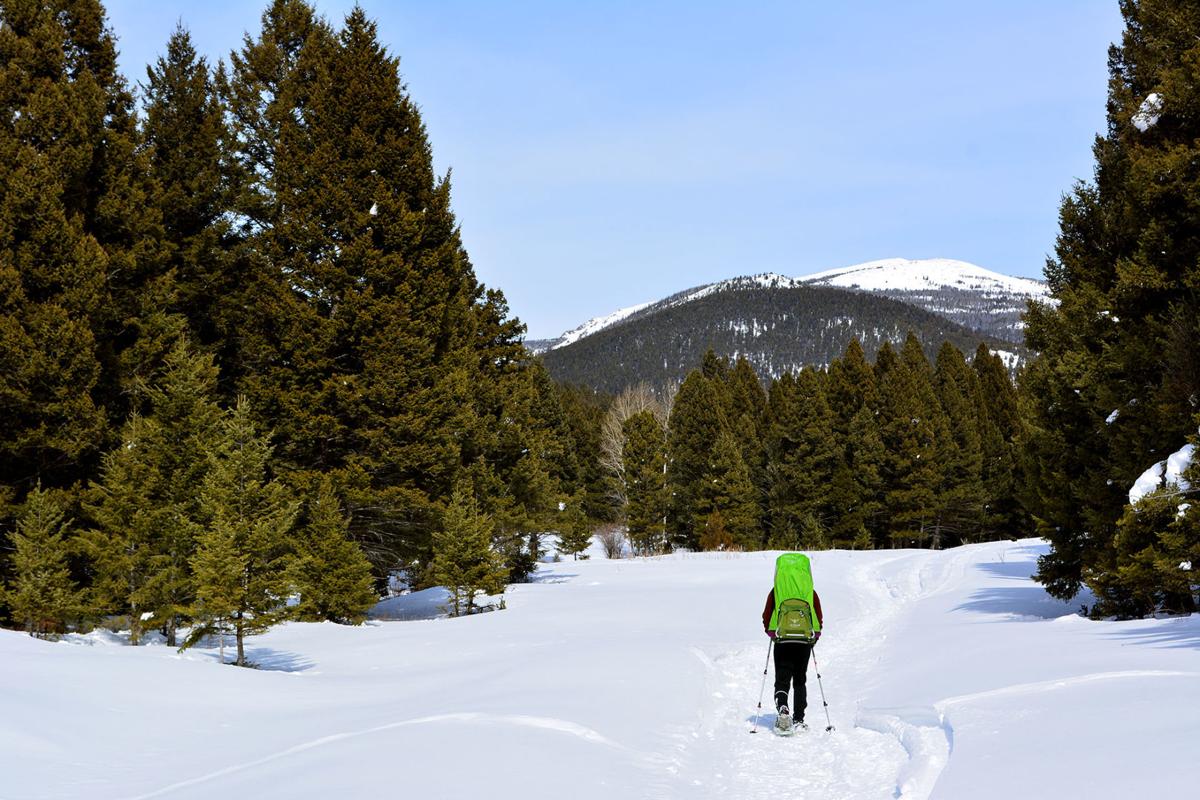 Jeff Errett snowshoes across a meadow along Queen Gulch toward views of Crow Peak, the highest summit in the Elkhorn Range. 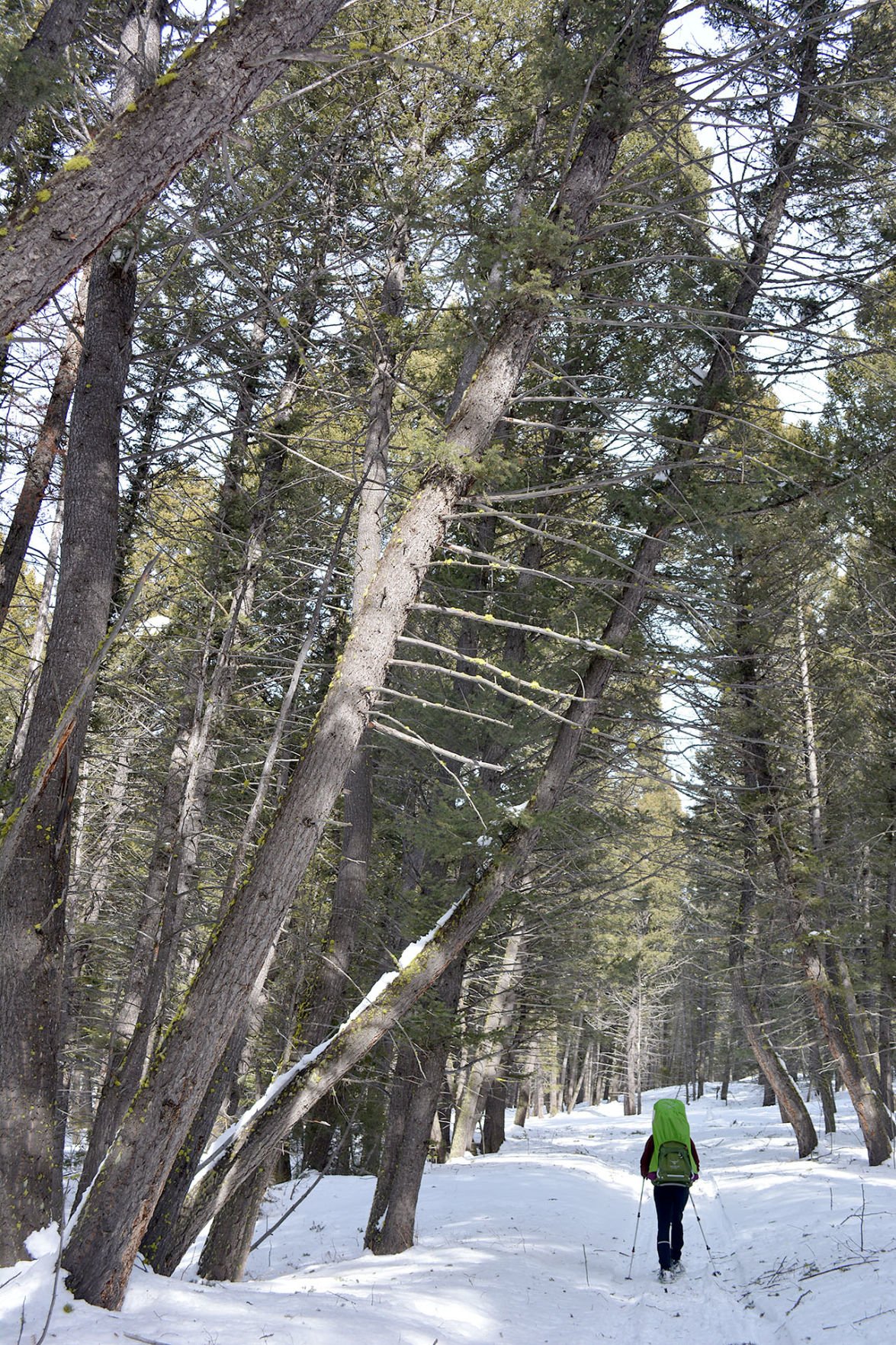 Jeff Errett on showshoes climbs gently up the wooded slopes of Queen Gulch.

Snowshoer Jeff Errett, proceeding on Tramway Road, approaches views of the massively wooded ridge across Queen Gulch. Read more about enjoying this and the Diego Town Road in winter starting on page 10.

Wooded foothills unfold down the Elkhorn drainage toward the Boulder Valley from a skiable ridge off Diego Town Road.

Jeff Errett snowshoes across a meadow along Queen Gulch toward views of Crow Peak, the highest summit in the Elkhorn Range.

Jeff Errett on showshoes climbs gently up the wooded slopes of Queen Gulch.

At the head of a narrow gorge draining the Elkhorn Mountains, the historic town of Elkhorn settles into its ragged mound of mines. Though the weathered camp shoulders tarnish, winter roads trace haul grades that shuttled loads of ore and salt, miners and woodcutters, by rail or wheel or beast, through the gulches and glades of the country’s once most productive silver mining camp. A foray by ski or snowshoe reveals the anthill of the Elkhorn district overcome by forest, its chambers and transport tracks still traceable under snow.

Heyday passage into Elkhorn was born in part of a bitter rivalry between the Northern Pacific and Montana Central Railroads in their mad bid to tap Butte’s flourishing copper deposits. When Montana Central won the race west through the Boulder Valley from Helena in 1888, the NPR abandoned its track before reaching Bernice. Swallowing financial loss, the NPR swiveled to Boulder to broach the booming Elkhorn camp in need of reliable transportation. The first train from Boulder arrived in Elkhorn in 1890 as the district’s principal producer, the Elkhorn Mine, was peaking.

Winter foot travel spans all skill levels and crosses varied terrain. Trails are not officially groomed, but one generous Elkhorn resident drags a bedspring by snowmobile over popular winter roads.

Respect private holdings as you kick off into the solitude of a silver era gilded in snow.

About 6.5 miles up Elkhorn Road, park at the mouth of Queen Gulch near the old rail site of Queen Siding. A creekside trek funnels between wooded ridges of Douglas fir where trains swung through to circumvent the final direct 1,000-foot gain to Elkhorn, hatching a 4-mile approach instead up a 4% grade.

The jeep road climbs gently. Wind along the creek for half a mile until the road curves right to meet a junction. Guided by the distant view of Crow Peak, snake left to enter a meadow corridor. Before you, trestles once eased passage over minor water crossings. Behind you, the path not taken nudges up through the ridge past the Elkhorn Queen Mine, where intensifying production through 1899 offset dismaying decline at the main Elkhorn Mine. Ore shipments from the Queen to the Peck concentrator at East Helena at the turn of the century dissuaded the NP from abandoning the branch, preserving daily rail service for a short time.

Traverse the meadow and rejoin the company of trees as they huddle closer, heaving swayed trunks high through low-slung light.

Leave the NP line behind where a dramatic hook looped the train up the left ridge in a 20-degree curve bridging a side canyon across a 320-foot, four-tier, 20-span wooden trestle just below the Midnight Bell Mine. The remaining rail grade, achieved only by short trains, required cars negotiating the descent from Elkhorn to stop at Queen Siding to cool their wheels.

About 2.5 miles from your starting point, Tramway Road descends from your left, crosses Queen Gulch, and veers behind you. A private cabin marks the intersection and a moment of decision: Retrace your tracks downhill, turn left to wind up Tramway Road toward Elkhorn another 1.75 miles, or, for the undeterred, continue forward, climbing steeply into spruce-fir forest toward the Leslie Lake turn-off.

To fuel the flare of enterprise, woodcutter camps thrived along Elkhorn gulches. The small army denuded hillsides, roped cordwood stacks to their beasts of burden and drove them up tram roads to fire voracious mill boilers and heat homes.

Eventually, narrow rails on the road to Queen Gulch accommodated mule-drawn carts until coal arrived on the first train into Elkhorn, quashing the wood cutting industry. This tramway, minus the rails, provides a gradual, picturesque, 4.25-mile descent from Elkhorn, requiring a shuttle.

Park one vehicle at Queen Gulch. Continue through Elkhorn to park in a small corner lot where the road hooks right.

Head right toward the cemetery and the location of the old rail depot, once the highest point on NP rails at about 6,400 feet. Leave the rail grade when you turn promptly left onto the upper road, level until it begins a mild, winding descent. About 1.25 miles from your starting point, a strong left curve opens onto steep, wooded views across Queen Gulch.

Cross the creek at 1.75 miles and turn right, bearing right almost immediately then right again in 1.25 miles as you cruise toward your vehicle.

With access to the range’s two loftiest peaks, the road north out of Elkhorn offers varied opportunity to loop or investigate tangents into the woods, climbing gently then gathering difficulty. In the 1930s, hardy souls kicked off from the summits, and two rope tows led to the base of Elkhorn Peak for a lighted run 2,000 feet long.

Park in the small lot above town. Branch left toward the Iron Mine past the NPR water tank, the oldest in the region with a capacity of 48,000 gallons, built in 1890 to service the steam locomotive toiling up from Queen Siding, restored from 2013 to 2017.

At the next prompt junction, branch right toward Muskrat Creek Trail to gently gain a meadow with a distant ridgeline view. As the meadow pinches out, look left to enter the groomed Dagotown loop and a short, placid descent past remnant structures and mine sites that flaunt more sign of elk than boomtown bustle.

The increasing pitch and chop of Diego Town Road tests mettle and muscle on runaway curves or backcountry slopes, and may require skins on skis. About a mile from your starting point, bear left at a prominent Y junction to climb steep curves through trees, bypassing the C & D, Louise, and Golden Moss Mine sites. Two miles from Elkhorn, a narrow park unfurls down a left ridge. A bygone stretch of wagon road climbing to the Iron Mine once ran through here. Pause for the view of unfolding ridges, and launch off toward the lower clearing.

The untracked descent lands you on an open hilltop. Pilot down left through forest past the Union Mine with an eye for snow-draped downfall. Rejoin the Diego Town Road for a curvy, 1-mile glide to your vehicle.

About 7 miles up Elkhorn Road, park wisely at a left turn. Rail from Queen Siding once curled a tight loop through this cut to service the mines, mill, and cabins up the gulches between Elkhorn and Turnley Meadows.

Dip down through the gap to cross water with care. Turn right where the flat, narrow, ungroomed road along willow bottoms balloons slowly as Turnley Meadows greets its defining hem of ridges and gullies. At one mile, keep straight past the Rawhide-McCarty trail entering on your left. The main road ends after 1.5 miles at the Ninety-Cent Gulch trailhead.

Getting There: From Boulder, follow Highway 69 south for 7 miles, and turn left at the Elkhorn sign onto White Bridge Lane. Cross the Boulder River and continue right for 3 miles, keeping left at your first junction then left again onto Elkhorn Road for another 8 miles into Elkhorn.

Vaia Errett is one of seven volunteers serving on the Jefferson County Parks, Trails and Recreation Commission, an advisory group to the Board of Commissioners. Send comments to ptrc@jeffersoncounty-mt.gov.