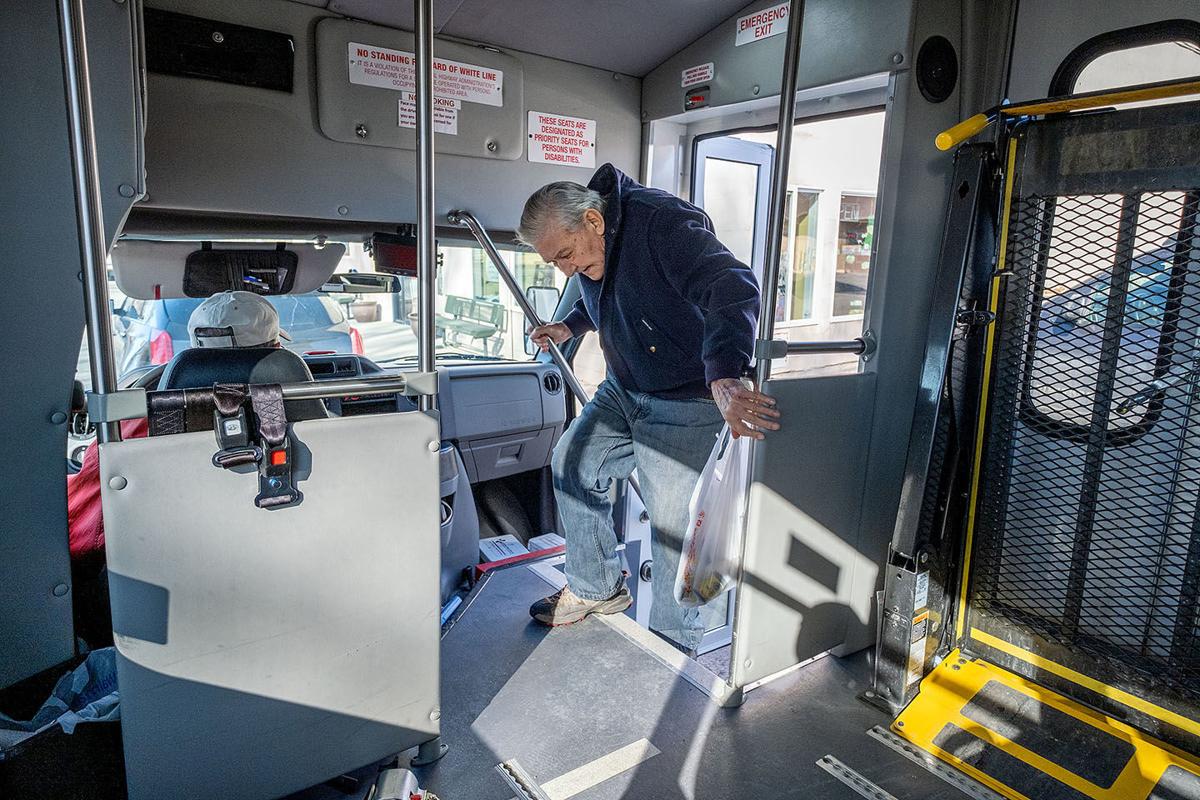 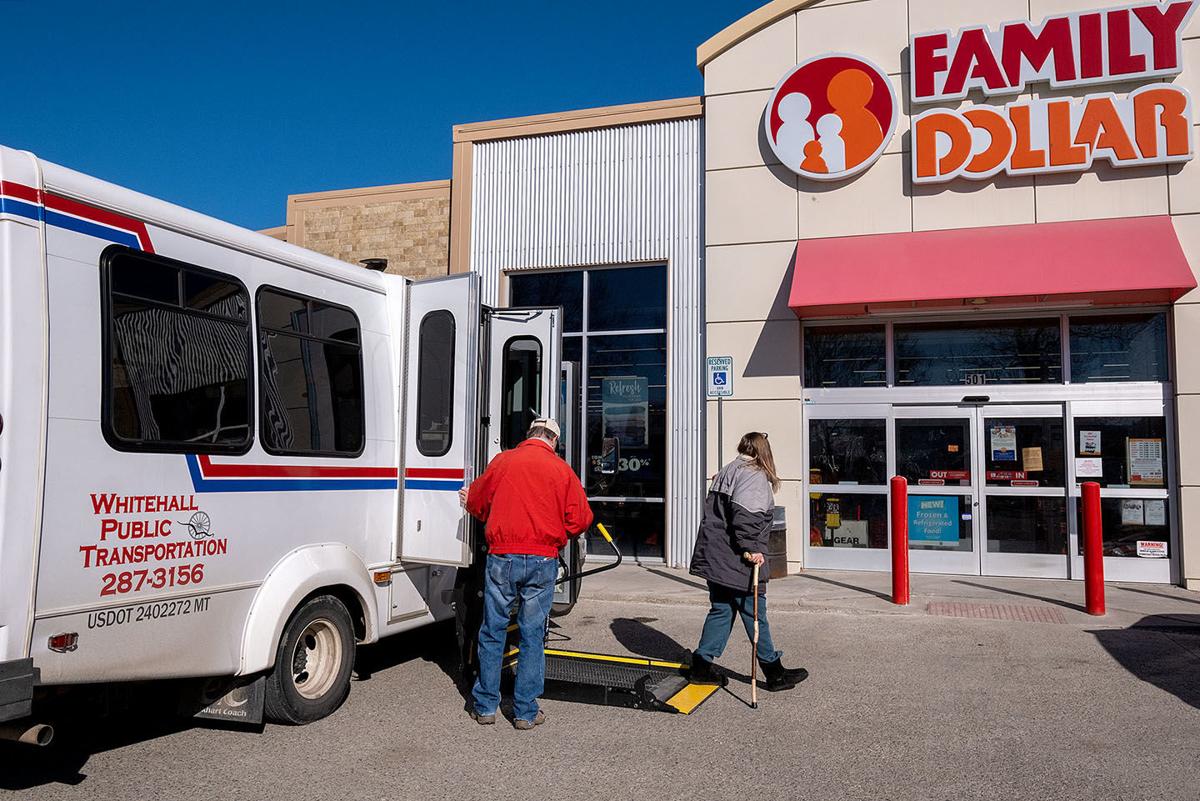 In 2010, the Whitehall Senior Center, an activity and meals hub for seniors in Whitehall, was trying to unload a bus and a van it had been using to transport its patrons and residents of a nearby assisted-living home. The Montana Department of Transportation had designated the center that area’s agency to provide state-funded public transportation for seniors and people with disabilities. But the center was finding the state’s reporting system and other requirements too cumbersome.

Dick Gustin, who had been running the program for Whitehall Senior Center, asked Liberty Place, a local nonprofit that houses and rehabilitates people with severe brain injuries, if it wanted to add the two vehicles to its own fleet of three.

“The people we serve have many medical needs which require specialist care, and we have to travel for those services,” explained Liberty Place Executive Director Ann Geiger. “We also have some who are able to have jobs in the community. [Gustin and I] began to talk about the fact that Liberty Place was already doing a lot of driving for residents and … it seemed to make sense for us to join forces.” Liberty Place took over the program in 2011.

Across Montana and much of rural America, transportation — to faraway health care, to food and other shopping, and to social activities — is the great barrier to quality of life for the elderly. In a 2019 Jefferson County community health assessment, 45% of stakeholders identified transportation to services and care as a major concern. The Rocky Mountain Development Council, which serves three counties in central Montana, found in a 2015 survey that transportation was by far the most often identified need for seniors.

But providing transportation can be prohibitively expensive and burdensome to smaller agencies that serve scattered rural senior populations. The experience of Whitehall’s agencies shows that collaborating to serve multiple constituencies, the elderly among them, can provide the scale and operational efficiencies to make shared rides feasible.

After reaching an agreement with the Whitehall Senior Center, Liberty Place formed Whitehall Public Transportation as a parallel nonprofit funded primarily by donations, contracts and MDT and other grants. The new entity bought the senior center’s bus and took over its minivan — provided through an MDT contract — and went into service on July 1, 2011. Paula Hippert, a part-time office assistant for Liberty Place, was tapped to be a part-time dispatcher and eventually became full-time manager.

Whitehall Public Transportation established its mission as “to offer independence and quality of life to those who depend on safe and reliable transportation services.” Said Geiger: “Transportation for those who are elderly or have a disability is very difficult to come by in many communities. Transportation is a basic human need, yet, sadly, it is a need that seems to be on the back burner in other areas.”

It took a while for the program to get traction. Posters were put up around Whitehall and brochures mailed to residents. Gustin would drive the bus around, even if empty, and stop at local stores and the post office. Gradually, Hippert recalled, word of mouth spread.

Now, Whitehall Public Transportation, recently relocated to its own building, has seven vehicles and six drivers and contracts with both Whitehall Senior Center and Meadowlark Manor, an assisted-living facility, as well as St. James Healthcare, a rehab service, and Rocky Mountain Development Council. Its drivers also pick up a regular cohort of individual riders. Hippert said they were transporting an average of 325 passengers a week before COVID-19 concerns temporarily shuttered the service.

The largest cohort of riders is the elderly, followed by people with disabilities, Hippert said. In fiscal year 2019, the former accounted for 47% of the program’s 27,195 rides, the latter for 31%. The remaining 22% were people with low incomes and others from the general population, she said. Because much of Whitehall Public Transportation’s funding — its FY2020 budget was $131,279 — comes from grants that require bus service to be free to users, no fares are charged. But donations from clients are allowed, she said.

“We used to do [shopping] once a week,” Hippert said. “It got so popular that now we do it twice a week, on Tuesdays and Fridays.” On those days, a driver will pick up people at their homes — they call and schedule in advance — and drive them to the bank, the post office, the grocery store, wherever their errands are, and take them home.

“If they’re going grocery shopping or something, we’ll help them get their bags at least to their door,” Hippert said.

Other days the service ferries people to Butte, 25 miles to the west, mostly for medical appointments but also for shopping, and to and from major Whitehall events such as Frontier Days and the Christmas Stroll.

Talking to some of the regular riders, it becomes clear that Whitehall Public Transportation does more than solve logistical problems of running errands or visiting the doctor.

Bruce Ball, a Whitehall resident, said using Whitehall Public Transportation has given him a “broader vista” on his community and “mixes things up” for him.

“The sense of community that this bus enforces is very important. I’ve become more part of the community instead of being stuck in my apartment,” he said during a recent ride. “I wouldn’t have met these people if I weren’t on this bus on a regular basis.” (Ball has since passed away.)

“You come for the company sometimes, especially in the wintertime when you get stuck in your house or apartment,” Correll said.

“We do have a good time on our trips,” said Carol Liebers. “It’s like social time for us. It allows us a certain amount of independence.”

At the behest of the Jefferson County Board of Commissioners, Whitehall Public Transportation now has extended its service to Boulder, a similar-sized community 30 miles to the north. The Commission has authorized allocating $15,000 in county funds to help fund the Boulder service in its first year. MDT has said it will contribute $8,000. The service started July 7, with Hippert’s Whitehall colleague Susan Poff as the primary driver and Boulder resident Pat Lewis as a volunteer to fill in as needed.

“Getting around to things such as shopping and medical appointments become very difficult for the aged and disabled,” said Jefferson County Commissioner Bob Mullen. “We need to think about and begin to implement strategies that target the necessary transportation needs of these individuals. An initial expansion in the Boulder area is a start on those strategies. The goal is to expand the transportation services across the county.”

On the first and third Tuesday of every month, Whitehall Public Transportation will pick up Boulder riders so they can shop and run errands locally; on the second and fourth Tuesdays, the bus will drive to Helena for medical appointments, shopping and other services.

“The long-term hope is that we’ll be providing more services as we find out what the needs are from the residents of Boulder,” Hippert said.

To gather more support this time, Hippert and Poff visited the Boulder-Basin Senior Center and local businesses every other week beginning in January — until the COVID-19 threat hit — to get the word out and even give sample rides. “We wanted to create an exposure as well as a relationship with Boulder residents,” Hippert said. “And we’ve had very positive feedback. The needs are there.”

Hippert hopes to eventually expand service in Jefferson County to Basin and elsewhere. In anticipation of further growth, Whitehall Public Transportation, likely by July 1, 2021, will be spun out of Liberty Place and more closely tied with Jefferson County, Hippert said in an email. While details remain to be worked out, possible outcomes include Whitehall Public Transportation becoming either a standalone nonprofit under contract to the county or a County Transit Agency, she said.

So far, the service has proven transformative for rural seniors who otherwise would lose access to mobility, needed services and each other’s company, she said.

“I have learned that there are a lot of people that are [elderly or] disabled living independently at their homes, and ... without our services ... they would not be able to get out and do anything,” she said. “We’ve opened the doors for so many.”

How to catch a ride

Whitehall Public Transportation’s Boulder service operates every Tuesday. On the first and third Tuesdays of each month, shuttles pick up pass…