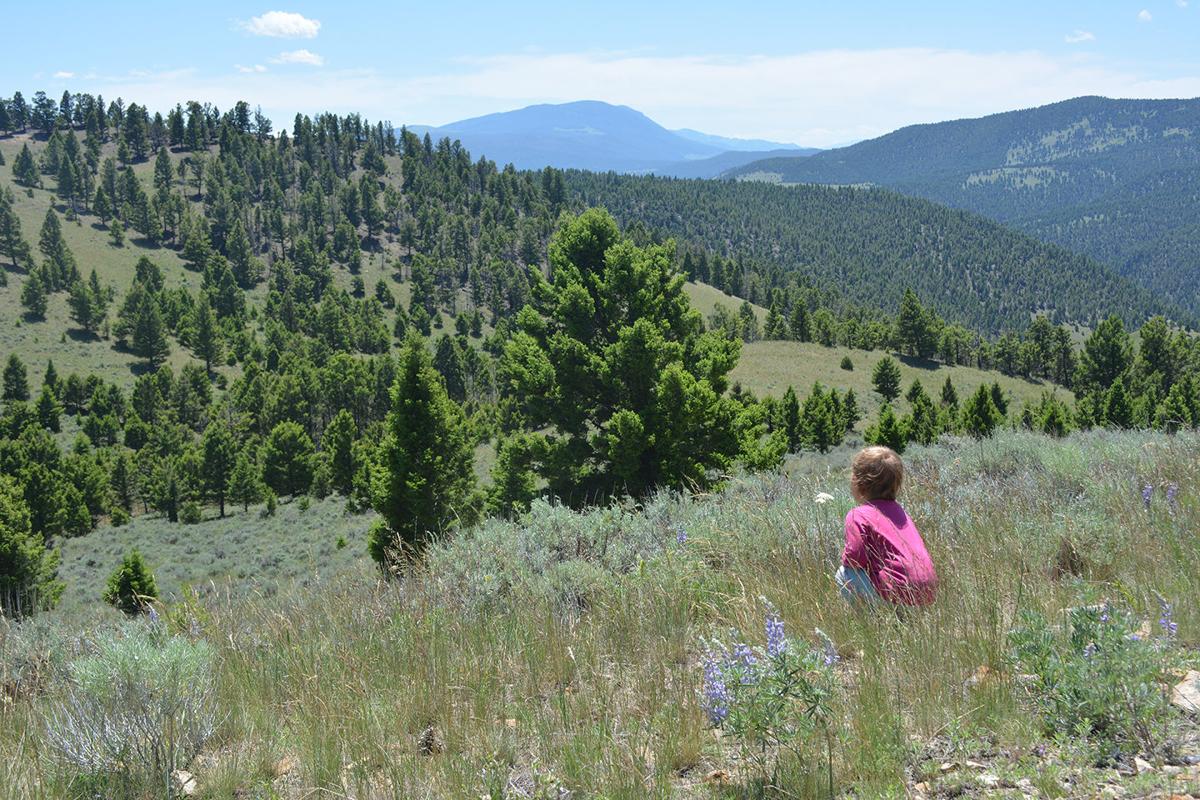 Daphne Errett soaks up views toward the Elkhorn Mountains from the Bitterroot Overlook. 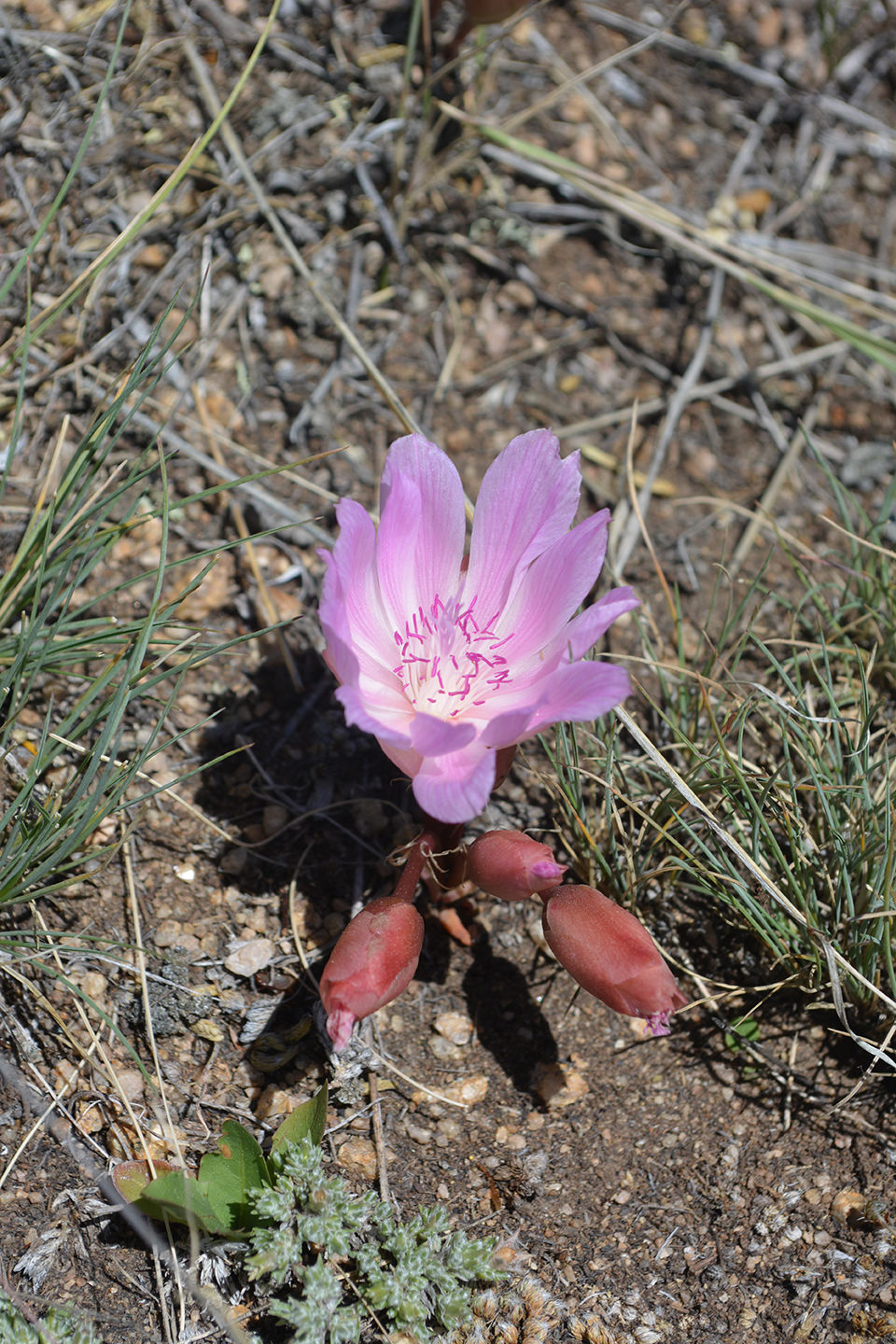 A bitterroot flower with additional buds; the leaves have already withered. 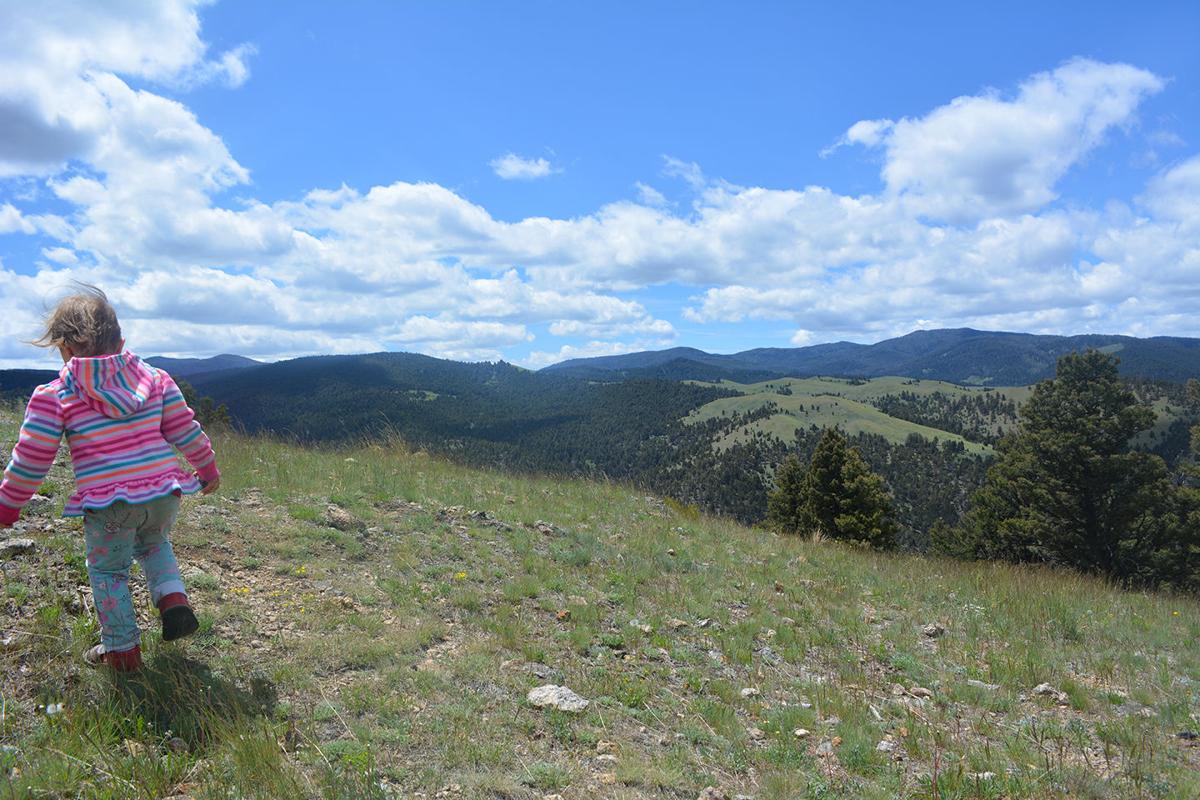 The crest of Snow Road with ridgeline views of the Boulder mountains. 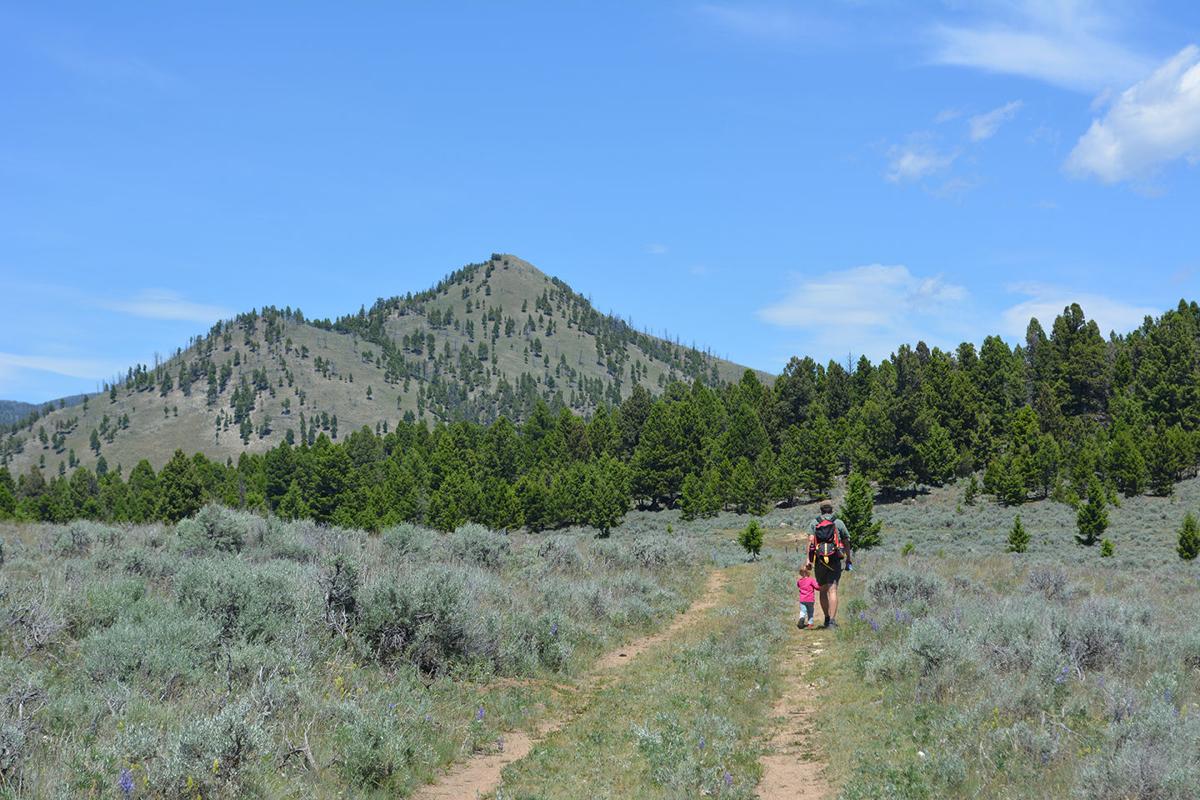 Jeff and Daphne Errett climb from the North Tower trailhead toward a view of Pole Mountain.

Daphne Errett soaks up views toward the Elkhorn Mountains from the Bitterroot Overlook.

A bitterroot flower with additional buds; the leaves have already withered.

The crest of Snow Road with ridgeline views of the Boulder mountains.

Jeff and Daphne Errett climb from the North Tower trailhead toward a view of Pole Mountain.

Beyond the I-15 underpass, the road north out of Boulder climbs from a history of industry and enterprise toward hiking routes close to town. Sweeping overlooks and the ephemeral blooms of Montana’s state flower pivot with the past on the communications tower visible from Main Street.

Depot Hill Road crosses the bygone rail grades of both the Northern Pacific and Montana Central/Great Northern Railways near the end of Second Avenue.  The Great Northern depot, relocated uphill with the rail grade in 1900, burned in 1929, was rebuilt, and later relocated to Main Street in the 1980s where it continues to house the Senior Center, the See and Save Thrift Shoppe, and the Hair Depot.

Just south of the communications tower, Depot Hill Road approaches a U.S. Bureau of Land Management trailhead along Snow Road beyond the Free Enterprise Radon Health Mine.  While the Free Enterprise shifted focus from mineral wealth in the mid-1920s to health and healing by 1950, views from the end of Snow Road are enduringly panoramic.

North of the communications tower, a second BLM trailhead leads to unexpected vistas and an early summer bonanza of bitterroot blooms.

From both trailheads, routes ramble and fork along roads and tracks through sage flats or lightly wooded hills.  While trails are open to motorized travel and cross rangeland, most days offer a tranquil outing free of engine hum or livestock.

A short, private section of Snow Road with access currently permitted by landowners at the Free Enterprise leads to the BLM trailhead.  Drive respectfully and park on BLM land just off Snow Road.  The grassy knobs of Sugarloaf Mountain rise to your right with the communications tower directly behind you.

There are two options from here.  The first follows Snow Road unmistakably to the overlook.  The second demands a solid sense of direction on obscure trails.

To arrive at the overlook, retrace your tire treads a few paces to Snow Road and continue forward through dappled juniper, fir and sage.

The rutted road climbs gently.  Neglecting a sidetrack at 0.1 miles, curve sharply left with the road in a quarter mile.  Steal a few glimpses over Boulder where the landscape rollicks down a treed ridge strewn with giant boulder mounds.

Within a quarter mile more, the road levels to meet a junction with a ramshackle lean-to on your left.  Beyond the shack along the left track, an old adit blocked by rubble marks an abandoned entrance to the defunct Uranium Mountain Mine, at one time associated with the Free Enterprise.

Bypass the lean-to and left track to continue forward along Snow Road.  Ignore fainter side tracks.  The main road mellows toward a clearing at the one-mile mark.  Here, tire tracks curve left to execute a wide turn-around at the base of a grassy hill.  Climb the short hill to the overlook crowned by a rocky knuckle.

From the wildflowers at your feet you could almost drop a pebble onto I-15, but the ridges receding to distance command your boundless arc of attention.  From the Elkhorn Mountains across the Boulder River Valley past the town of Boulder, the Whitetail Creek drainage, and the rugged, rippled Boulder Range centered on Jack Mountain, turn a full circle back toward the communications tower and Sugarloaf’s twin knobs.

To return, double back the way you came, or try the road branching right from the turnaround at the base of the overlook.  This branch rejoins Snow Road at the lean-to in 0.5 miles, completing a loop back to your vehicle.

If you crave a jaunty ramble instead of a foolproof overlook and you’re fearless in the face a of fading trail, forget Snow Road.  From the communications tower, embark instead along the flat two-track curving into trees away from the base of the tower hill.  Explore short tracks ranging from non-maintained to non-existent as they climb, braid, and bank across a broad knob, with sporadic links to Snow Road.  Some sections are vaguely defined by weathered branches lain along the trail.

From a parking plateau at the trailhead, follow the right branch marked with an arrow.  The sandy road with deep ruts climbs away from the communications tower to an immediate junction in less than a tenth of a mile.  Along the left fork, a brief amble will dead-end in a small clearing in 0.2 miles.  Choose the right fork instead.

through open stands of Douglas fir brimming with sage and trimmed with lupine and sulphur-flowered buckwheat by the end of June.  Within a quarter mile, crest upon a view of solitary Pole Mountain.  Dip and roll over gentle hummocks for the next quarter mile as the road levels, trends left, and opens toward a fence line at about 0.6 miles.

A landmark junction before the fence forces a choice:  Fork left through the gate toward the Bitterroot Overlook, a hilltop panorama spanning the Boulder and Elkhorn Ranges.  Or, mount a short, mild ascent right toward the Boulder Overlook, a vantage above town with a ridgeline vista of Elkhorn and Crow Peaks, highest points in the Elkhorn range.

The bitterroots are best admired mid-to-late June from the left fork behind the fence.

After crossing through the gate be sure to keep left along the fence line.  If you veer instead along a faint track toward views of Pole Mountain, strong left curves downhill peter out above a gully in less than half a mile.

Stay on track instead for a bitterroot bonanza by climbing briefly with the fence.  Cross level rangeland toward a distinctive grassy knob capped with trees.  By mid-summer, lavender lupine flowers and buttery paintbrush plumes flare conspicuously above the sage.  The bulky Bull Mountains claim the horizon to your left; behind you, the spare twin nodes of Sugarloaf Mountain prod the skyline.

In 0.3 miles, the road curves right at the base of the grassy knob.  Watch for the fleshy, rosy buds of bitterroot in the center of the track or concealed in grass along the roadside.  In bloom, the showy pink blossoms are difficult to miss strewn across gravelly shrubland.  Once the blooms have faded, however, any viewing opportunity disappears with them; the succulent, tubular leaves that appear early in spring wither before the buds open, leaving no obvious sign after bloom that the flower ever emerged.

The road ends 1.5 miles from your starting point.  Climb a hill onto panoramas you did not expect from this modest elevation.  At the top there is a stump, a log, and a lone Ponderosa pine.  Ridges expand south of I-15 from the Bull Mountains across the forested swales of the Boulder Mountains.  North of the interstate, Pole and Jack Mountains frame more rugged terrain of the Boulder Range drained from the north by Basin, Cataract, and High Ore Creeks, once productive arteries of the Basin Mining District including Comet ghost town.

On your descent the way you came, salute the signature skyline of the Elkhorn Range drawing you back to your vehicle.

From the landmark fence junction, the road right toward the Boulder Overlook climbs gently.  Do not pass through the gate.  Curve right with the fence on your left to gain a summit clearing in less than half a mile.  Step past the hilltop rock pile and fire ring remnants for panoramas that will do a local proud.   The postcard scene south lays the town of Boulder at the head of a down-valley view where the Boulder River snakes through a gap between the Elkhorn Mountain and Boulder Mountain foothills.  A pivot left showcases Elkhorn and Crow Peaks, stripped down to rocky contours through summer but hazed with snow early or late in the season.

•From Main Street in Boulder drive west 0.7 miles on Second Avenue until it curves right.  Pass beneath I-15 where the road transitions to Depot Hill Road.

•To South Tower Trailhead (Snow Road Overlook):  From the I-15 underpass drive 1.3 miles on Depot Hill Road and turn left onto the dirt road immediately past the Free Enterprise Radon Health Mine (Snow Road).  In 0.1 miles bear right to park on BLM land beneath the communications tower.  Note that the first 0.1 mile of Snow Road is a private road with access to BLM land currently permitted by landowners at the Free Enterprise; please drive respectfully.

•To North Tower Trailhead (Bitterroot and Boulder Overlooks):  From the I-15 underpass drive another 2.0 miles on Depot Hill Road.  The road transitions to dirt in 1.3 miles past the Free Enterprise Radon Health Mine and may be rough but passable in two-wheel drive.  Turn left at the first unmarked road beyond the communications tower.  Proceed 0.1 mile uphill on a rutted road with small rocks manageable by some two-wheel drive vehicles.  To park, fork left at the top of the hill into the ample pull-out at the foot of the tower; to hike, fork right.