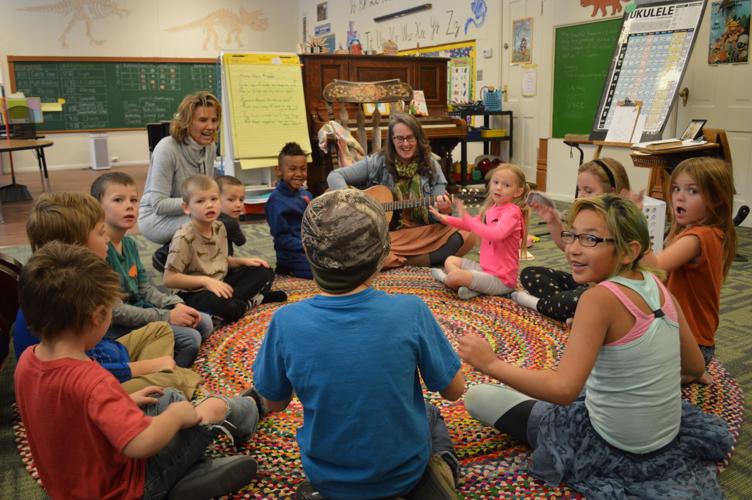 Basin Elementary teacher Camas Kakuk plays “Whatcha gonna do with a pumpkin sailor,” a parody she wrote with her class, while students and Jefferson County Superintendent of Schools Sarah Eyer, left, sing along. (Charlie Denison/The Monitor) 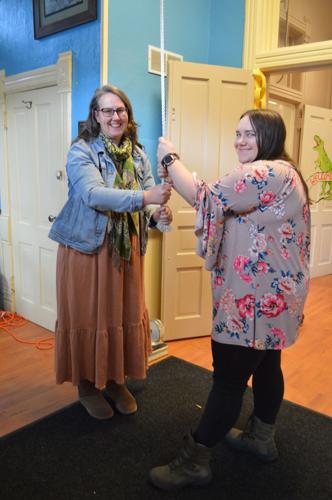 Basin Elementary fourth to sixth grade teacher Camas Kakuk, left, rings the school’s antique bell with help from first-year head teacher Katie Thomas. The bell was part of the school when it was built in 1895. (Charlie Denison/The Monitor).

Basin Elementary teacher Camas Kakuk plays “Whatcha gonna do with a pumpkin sailor,” a parody she wrote with her class, while students and Jefferson County Superintendent of Schools Sarah Eyer, left, sing along. (Charlie Denison/The Monitor)

Basin Elementary fourth to sixth grade teacher Camas Kakuk, left, rings the school’s antique bell with help from first-year head teacher Katie Thomas. The bell was part of the school when it was built in 1895. (Charlie Denison/The Monitor).

Much has changed in Basin since 1895, when the two-story elementary school was built. Back then the Katie and Hope mines were booming. There were 10 bars, four grocery stores, three butcher shops and around 100 students.

These days, however, Basin’s population is under 300, and the number of students at Basin Elementary – which teaches kindergarten through sixth grade – has plummeted to 11.

For the past 127 years, the bells at Basin Elementary have rung to begin and end the school day, and Jefferson County Superintendent of Schools Sarah Eyer wants to continue to hear them ring. In order for that to be the case, she needs help.

“People need to step up and support the school,” she said. “If there is an insufficient number of residents who have qualified electors at the district to serve as a trustee or a clerk, I can declare an elementary district to be abandoned and order the attachment of the territory of the district to a contiguous district, which in this case would be Boulder Elementary.”

Eyer shared this recently with Basin’s three-member school board, a moment chair Shannon Phillips considered “awakening.” The lack of community involvement, she said, is more of a threat to the school than low enrollment numbers.

“It has been a challenge to get folks to be on the board and then give it its due diligence,” said Phillips, adding that all three board members were appointed, as no one has volunteered to run. “I think a lot of people are complacent. They take Basin Elementary for granted, but people can’t assume Basin School is always going to be there, not if we don’t get support and don’t get trustees willing to put in the effort.”

As a push for more involvement increases, enrollment woes nevertheless persist. When Eyer was elected in 2020, there were 20 students enrolled at Basin Elementary, which is slightly above average for the last decade. Enrollment, however, has dropped significantly for the 2022-2023 school year, as a result of some students moving out of the district and three sixth grade students graduating.

The lower numbers may be alarming, but Eyer told The Monitor she doesn’t expect the trend to continue, as Basin Elementary is beginning a new chapter with highly trained teachers, a full-time maintenance person and a paraprofessional.

“Head teacher Katie Thomas and Camas Kakuk are both fully certified teachers with Masters degrees in the areas they are teaching,” said Eyer. “In addition, [Thomas] has an extensive special education background and Mrs. Kakuk has a huge science and outdoor science background.”

Thomas, who is in her first year at Basin Elementary, also expressed optimism about the future. First of all, she said a lot of her kindergarten and first grade students have younger siblings who are going to enroll next year or the following year, so she expects enrollment to rise. She also said she strongly believes many families want a small-school experience for their children. That’s certainly the case for her as an educator. After teaching much larger classes at her previous teaching job in Oregon, she appreciates the opportunity to educate in a more intimate setting. She said she’s seen students really connect with her and, as a result, gain a better understanding of the lessons she presents.

According to Eyer, Thomas made this statement during her job interview, and Eyer is happy and relieved to hear it confirmed after several months on the job. After all, Thomas’s role is much more than educating the children. She is also in charge of all the administration, the reporting, grade-keeping and making sure the school stays in compliance with the state. As for Eyer, it’s her role as superintendent to serve the needs of students, families, staff, community and school board needs for the eight rural schools of Jefferson County. Two of these schools – Basin and Cardwell – don’t have an administrator on site, so Eyer often finds herself at one or the other.

When she’s on the grounds, Kakuk said Eyer is quick to take care of whatever need comes her way.

“Sarah doesn’t only call the plumber, she helps with the plumbing,” Kakuk said.

Eyer said she’s spent “an inordinate amount of time” at Basin Elementary, but it’s been worth it, as there have been many big changes with both the staff and the building.

“This summer we installed new flooring throughout the building, a storage shed and a custodial closet with running water and a washer and dryer,” she said. “We also put a new roof on a few years ago.”

Unfortunately, Eyer said the new roof is leaking, which she is currently getting remedied, as it appears to be serious.

Eyer said she’s very pleased with the direction of Basin school and is impressed by the growth and development of the students under the new teachers.

“The teachers are very strict about sticking to the mandated reading, writing and curriculum, but within that they use their talents in creative ways,” she said, adding that Kakuk singing, playing and songwriting with the students is one example.

On a recent school day, Mrs. Kakuk demonstrated how that could work. Sitting in a circle with all 11 students, she strummed her acoustic guitar, singing loudly, “Whatcha gonna do with a pumpkin sailor?” a parody on the traditional “drunken sailor” song written by her class. The pirate anthem was fitting, as Kakuk’s classroom has ships and other pirate-related paraphernalia scattered about. The room is also decked in dinosaurs, which pays tribute to Kakuk’s passion for outdoor learning. Last year she took her class to Makoshika State Park in Glendive, where they explored trails where there’d been dinosaur discoveries.

Kakuk said she’d love to do another field trip like this again, but it’s hard to say when such an opportunity may arise. If enrollment numbers continue to go down, there could be financial consequences, including the removal of Lettie Smith’s nutritional program. Smith, who also serves as the school’s maintenance worker, has been instrumental in many improvements. However, when enrollment drops consistently, the school gets less funding from the state. This could result in cuts.

“Unfortunately these cuts could start with Miss Lettie’s program, followed by the full-time paraprofessional and possibly one of the teachers,” said Basin School District Clerk Britton Mann. “These would be tough decisions the Basin Board of Trustees would have to face. The current staff at Basin are an amazing group of people who care deeply about the education and well-being of the children in Basin. I hope this is something we can work through.”

Such a turn could potentially lead to closing the school altogether, an outcome Eyer said is not in the best interest of Basin taxpayers, as those in Basin would pay significantly more each year to send their children to Boulder Elementary.

Eyer has not publicly threatened to close the school,  and actions are being taken, which gives Eyer and Phillips hope. One example of this is the board’s recent approval of Running Start, a part-time program for four-year-olds starting next year.

“We’re excited to offer something like a Head Start program, where we can get children in the school setting and get them comfortable,” Phillips said. “It really makes a difference when it comes to the academics of kindergarten.”

“We have some new family members in the community who would be eligible for Running Start but not for kindergarten yet,” she said. “It’s a great opportunity to get students set up for success.”

Kakuk – who is now in her second year teaching at Basin Elementary – also expressed optimism that the bells will continue to ring.

“Montana is growing,” she said. “Schools are not going to get smaller. They are going to get bigger. All of our schools.”

And while some other schools may be experiencing numbers that are hard to cope with, Kakuk said that won’t be the case for Basin, as there are too many teachers and students wanting the atmosphere it provides.

“When you’ve had the opportunity to teach a class of eight students, you wouldn’t want it any other way,” she said. “I love it. You can really individualize the class, and that goes a long way.  I have never had a better opportunity to meet students’ individual needs, and, as a result,  I’ve already seen so much growth.”