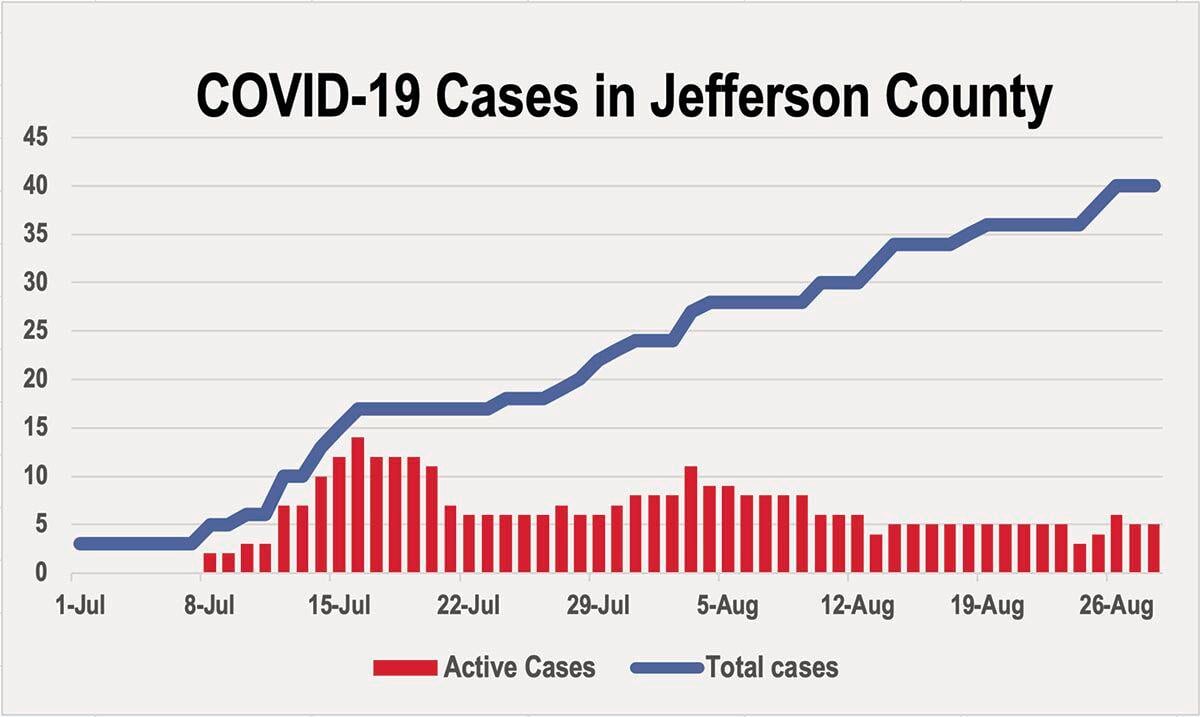 While COVID-19 arrived in Montana in March, Jefferson County did not experience a surge in cases until July. 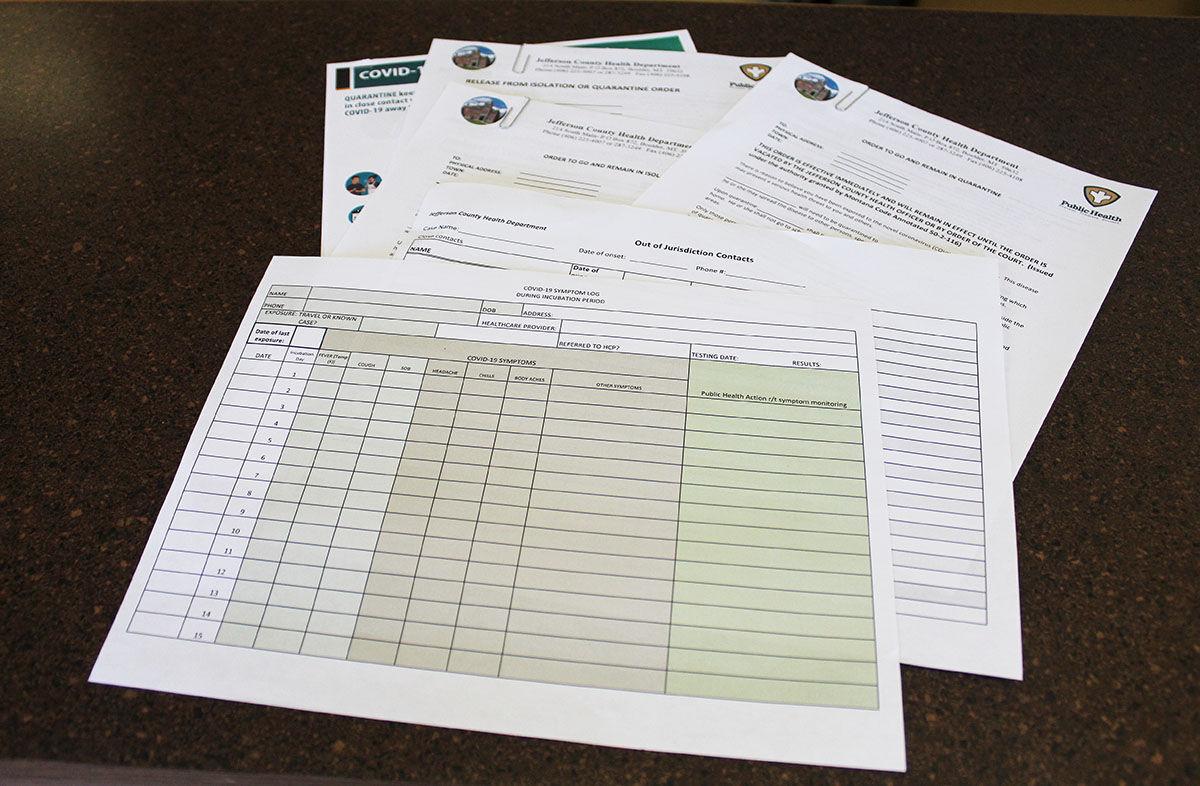 The Jefferson County Public Health Department uses through a variety of forms when working a COVID-19 case.

While COVID-19 arrived in Montana in March, Jefferson County did not experience a surge in cases until July.

The Jefferson County Public Health Department uses through a variety of forms when working a COVID-19 case.

No one wants to get that phone call — the one that identifies a person as a close contact of a positive COVID-19 case, said Jefferson County Public Health Supervisor Pam Hanna.

Since COVID-19 was first detected in Jefferson County in March, Hanna’s staff has made those calls to about 155 people considered close contacts of the now 42 cumulative positive cases — as of Monday, Aug. 31.

And of those 42 positive cases, most originated from outside Jefferson County, and that’s one reason why events are being canceled, said Hanna.

Cases started to rise immediately after the Fourth of July, and at one point, the county had 14 people actively sick or positive for the virus.

As of Monday the active count was down to five, after having reached a low of three for a few brief hours on Aug. 24.

It was during those brief hours that Hanna worried: less than four cases meant that masks could come off, per state mandate, and during that week, school was starting up again.

But it didn’t take long for her department to be notified that there were two more positives, pushing the active case load back up to five.

The masks would remain in place.

Hanna credits masks and contact tracing, as well as a faster turnaround on testing results, for helping to contain the surge in Jefferson County that began in early July.

At one time, test results were taking one to two weeks, rendering them basically useless, but now it’s down to 24-48 hours, she said.

Once a positive individual is identified, it takes about five hours for the Department of Public Health to work a case from start to finish — and that begins by interviewing that person, said Hanna.

Part of the interview includes gathering names, and ideally, contact information, said Hanna, adding that a close contact is someone that has been within six feet of a COVID-19 positve individual for 15 or more minutes, or has had physical contact with a positive individual.

Sometimes people don’t realize that passing by someone in the post office doesn’t count as a close contact, said Hanna.

Jefferson County has been fortunate in that the COVID positive individuals have so far been able to identify who they were close to — the advantage of being in a small community, said Hanna, adding that’s why attendance records and rosters are important.

The Public Health staff cannot tell the close contact who the positive case is, due to HIPAA    (Health Insurance Portability and Accountability Act), but in some instances, that is already known, she said.

The laws surrounding privacy also dictate that the nurses within the Public Health office keep the information confidential between themselves, meaning that office doors are closed when calls are being made.

The Public Health Department has a stack of documents it works off of while investing a case. There’s a sheet for logging symptoms as a nurse calls or texts individuals who are positive or in isolation and quarantine on a nearly daily basis for 14 days. There is a form for logging contacts that live outside of Jefferson County, as those are passed onto the appropriate jurisdiction. Information must also be transmitted to the state for its records.

Public Health has so far hired two temporary nurses to help with the workload and is training a third.

Those who are positive or are considered a close contact are issued an order to go into isolation or quarantine — with the consequences of violating that order clearly indicated on the forms.

“A person who fails to comply with the order to Go and Remain in quarantine (isolation) is guilty of a misdemeanor. Upon conviction, you are subject to a fine of not less than $10.00 or more than $500.00, imprisonment in the county jail for not more than 90 days or both. Each day of violation constitutes a separate offense.” Mont. Code Ann. 50-2-124 (2) & (3).

Quarantine is for those who might have been exposed to COVID-19 and lasts for 14 days. Isolation refers to those who are infected with the virus, whether they have symptoms or not.

In both cases, individuals are ordered to stay away from others, with isolation calling for a higher level of separation.

Those in isolation or quarantine are also advised of various resources available, such as medical care, if needed.

Hanna’s office also suggests that close contacts be tested for the disease.

Even if the results come back negative, they must still remain in quarantine as there is the possibility of becoming  a positive case, said Hanna.

The county currently has some adolescents who have tested positive for the virus just as school is reopening, said Hanna.

Measures to prevent the spread of the virus have been implemented, she said, adding “we need people to do the right thing for the right reasons.”

Once a person in isolation has met the criteria for recovery — a least 10 days beyond the onset of symptoms  or 10 days past a positive test, is improving and has had no temperature within the past 24 hours — Public Health issues an official release. Those who are in quarantine are released after the 14-day quarantine period has passed.

“Both separate individuals from the public to break the chain of transmission. The release strategies differ,” she said.

Hanna said that so far, Jefferson County residents have complied with the quarantine and isolation orders.

Hanna calls COVID-19 a “paradox.” It’s a new disease with much to be learned and because of that it changes constantly, she said. Because of those unknowns and changing circumstances, people tend to get restless, tired or have trouble believing or understanding it is out there.

“The good part is we are learning and coming closer to interventions such as a vaccine at a faster rate,” she said.

Hanna has only been on the job for six weeks, replacing former supervisor Karen Wandel. She keeps a list of goals posted at her desk: Healthy people, healthy practices, healthy places.

Jefferson County can’t have healthy people and places without healthy practices, she said.