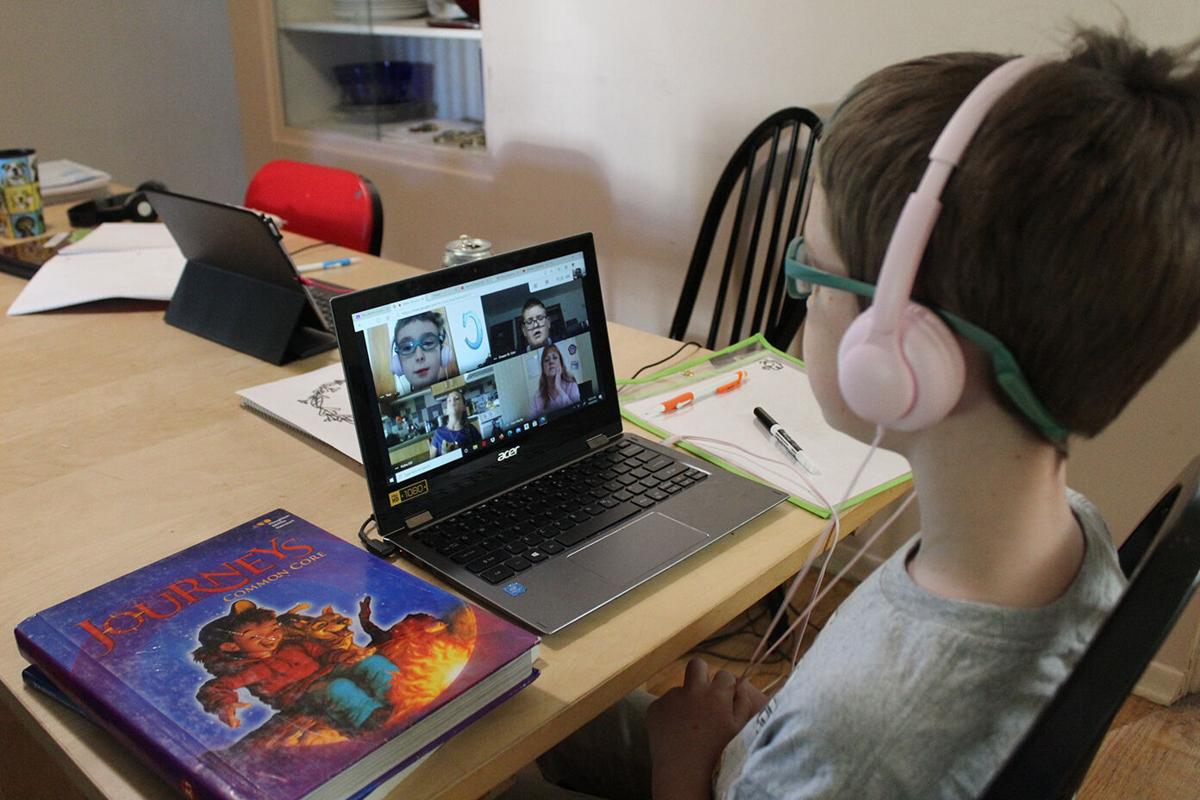 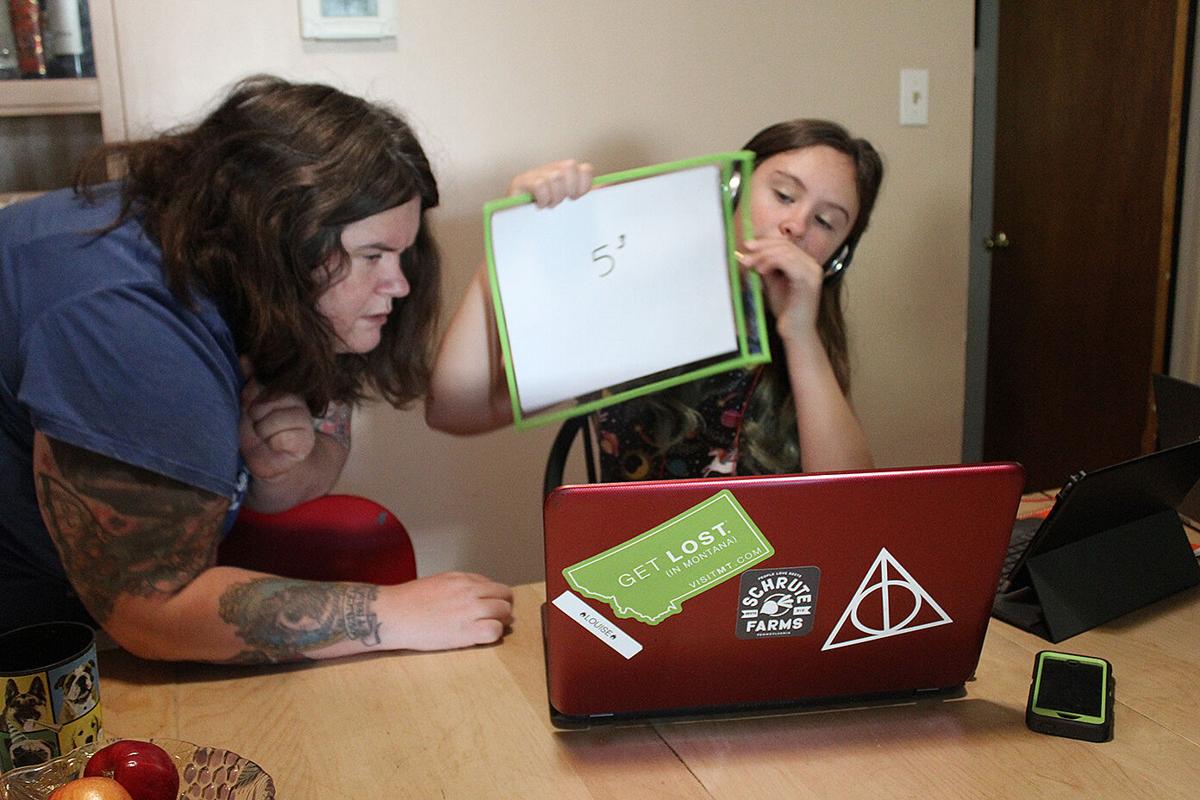 Sometimes there’s a misplaced set of headphones that require a quick search, or the internet connection is balky, but generally by 9:30 a.m. the Craft family is online and at school.

Remote school, that is.

Jeremy and Erin Craft decided to go with the remote learning option offered this fall at Boulder Elementary School due to COVID-19. They have two children, Annabelle, 11, who is in sixth grade, and Tom, 8, who is in third grade.

Jeremy is a paralegal in the legal services division of the Montana Department of Justice and has been working remotely himself since March. Erin is currently pursuing her master’s in public health education and her work is also online.

They chose the remote option because they could, due to their work situations, but also to provide a bit more opportunity for social distancing in the school building itself.

“Even with two less kids in the classroom is a lot,” said Erin, adding that, ironically, the kids’ good friends’ families had, unbeknownst to them,  also selected the remote option.

Relatively few families at Boulder Elementary School chose to attend school remotely this year — 25 out of a total school population of 165, according to Superintendent and Principal Maria Pace.

The Crafts were starting their third week of the remote option when they shared a morning with the Boulder Monitor.

Erin said the first week of school was mostly spent getting all the equipment hooked up, and often the “technical difficulties” continue to linger.

Part of the problem stems from the whole family being online at the same time, as Jeremy is also working downstairs during the day on his state level site, and the bandwidth is often not able to keep up.

Other times, one of the children has misplaced a key piece of equipment, such as headphones or a cable, which requires a search, said Erin.

“There’s at least one thing each morning,” she said.

The family has designated the dining room table as the “school room,” and Annabelle and Tom work from their laptops or iPads. The headphones keep them from distracting the other.

There are three remote students in Annabelle’s “class,” and Tom’s class has five.

Boulder Elementary School has designated one teacher for remote learning only in grades 3-5, while the older students use a more self-guided curriculum offered through Google Classroom.

Annabelle’s Google Classroom site shows a portal to each of her classes — English, math, science, social studies, as well as band, P.E. and library.

That morning, Annabelle started her day with a check-in and math review with teacher, Kessie Strausser.

Strausser was online in real time, and went through a series of math questions and problems, where Annabelle replied either verbally, or by showing the answer on an erasable white board.

Tom, who was sitting at the end of the table, had called up his first assignment — a selection of possible journal entries. Next to his computer were remnants of breakfast and a mug of mostly hot chocolate.

Tom chose the one that asked him to imagine being a fish in a fish tank. He began pecking away at his entry on the keyboard.

Erin said that since spring, when all Montana schools were abruptly shifted to online coursework with no preparation due to the pandemic, Boulder’s program has vastly improved.

Now there is a start and an end to the school day, said Erin, referring to the often chaotic situation in the spring, when teachers and parents complained of a never-ending school day due to everyone’s differing schedules and inexperience with online learning.

Over the summer, Boulder was able to develop a remote learning plan that includes a series of tools to keep everyone on track. Parents who wanted to do the remote option have signed up for an initial nine weeks, and part of the plan calls for taking attendance.

Erin said she spends a good part of the day keeping her kids on track, monitoring breaks, refereeing conflicts and answering questions.

She does her own classwork in the evenings, or during breaks — unless she has a Zoom meeting of her own. Jeremy works downstairs.

“I’m glad the teachers are there to help,” she said, adding that the experience has given her a new appreciation for the work that teachers do.

“They’re doing it with a dozen kids. They need more support,” she said.

Annabelle and Tom are able to see their classmates online, and since their best friends are also remote learning, there are opportunities to chat online and get together outside of school — with social distancing and masks, said Erin.

Annabelle said remote learning is “actually pretty fun,” and it eliminates the annoyance that can come from other kids — except for her brother, that is. She gets frustrated with the lack of an actual classroom and a teacher who is physically present because it’s harder to ask questions and get help with assignments. For her, that generally is done through email. Tom, on the other hand, has more real time interaction with his teacher.

Tom, like many young boys, said the biggest annoyance for him is “school.” He likes taking breaks the best. Erin said he tends to get more frustrated than Annabelle over the technical glitches that pop up during the day, such as losing the connection.

Erin describes the family as not being early risers, so remote learning has allowed for a more relaxed start to the morning.

That schedule was to be altered slightly the next day when Strausser announced she would be hosting the first synchronized class.

A synchronized class is when the in-person and remote students are following the same lesson at the same time with the same teacher as if all were in the same room together.

In preparation for the change, Strausser asked her remote students to start the class with the sound muted to cut down on background noise, and to look at the screen more often.

“It’s going to be interesting, to say the least,” said Strausser.

After her first synchronized class, Annabelle reported that she liked it, but still wishes she could get help as quickly if she were actually in the classroom, but knows her teacher is busy.

But, it was nice to hear everyone, she said.

Erin said each lesson usually lasts an hour and then they take a break.  The school day ends around 3 p.m. And because school — and all it’s paraphernalia — is right there in the dining room all day, every day, Erin admits, “our house is a lot less clean.